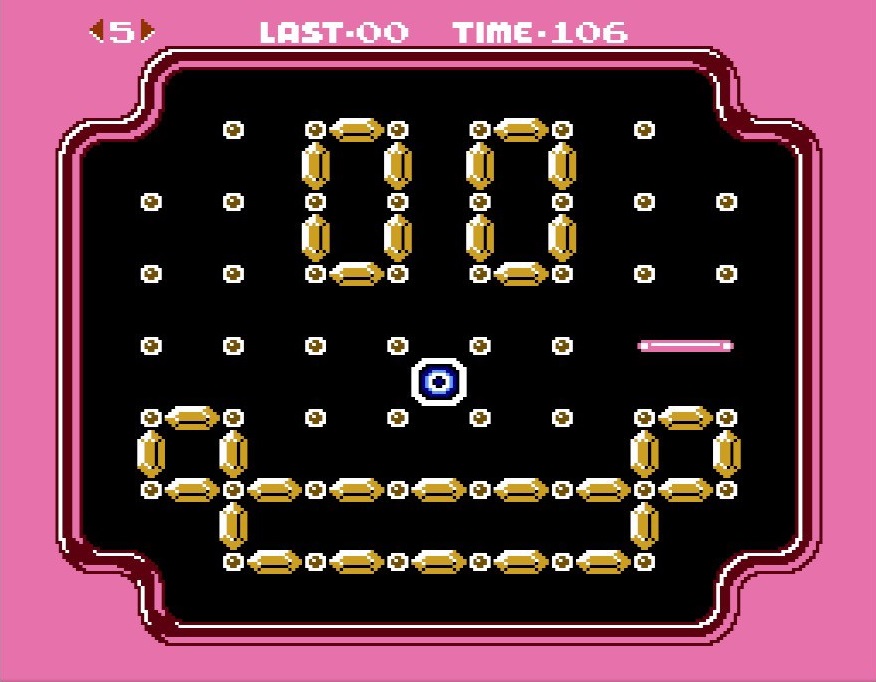 Clu Clu Land is a strange game I had never heard of until I played NES Remix. It's a maze game (kind of like Pac-Man) in which you control Bubbles, a fast-moving blowfish with hands, who can change directions only by grabbing poles and swinging around them.

Moving Bubbles is counter-intuitive. You can't just push ← to go left or ↑ to go up; instead you have to press and hold the absolute direction you want to turn in, not her left or right like turning a car. As long as you hold the button, she extends a hand in that direction and will grab the next pole. When she does so, she swings in that direction. For example, if you're moving upward, you could press ← to grab a pole to the left of her (regardless of whether she's moving upward or downward at the time), then quickly release it to make a 90 degree counter-clockwise turn. To make a u-turn, keep holding the direction until she's passed the 90-degree mark, then release. Describing this in words is about as confusing as it actually is while playing because it's unnatural to think like this, since no one ever moves this way in real life. Even after playing for an hour, I still struggled to move her how I wanted.

So what's the goal? In Pac-Man you're trying to eat all the pellets, but it's almost the opposite in Clu Clu Land. The grid starts empty except for the poles and outer walls. Whenever you pass between two poles, an ingot (identical to the rupees later used in The Legend of Zelda!) may appear there. To clear the stage, you must find them all. They form a design, such as a heart, mushroom, or face, so once you've revealed a few, you can infer where the rest are. This is the most interesting part of the game, trying to figure out which ingots you're missing to finish the design before the timer runs out. As in Pac-Man, fruits appear for bonus points. Grabbing a clock briefly freezes the enemies and stops the timer (and second player, if applicable!). A white flag nets you an extra life.

While trying to navigate this speedy mutant fish, you have to avoid a couple sea urchins called Unira. These are like the ghosts in Pac-Man but less aggressive and slower. There are no power-ups for Bubbles, but you can press A to shoot a short-range sonic wave. When you shoot the Unira, they temporarily curl into inert balls, which you can then push into a wall and destroy. However, they re-spawn a few seconds later. The real problem is when you swing around a pole right into one without an opportunity to shoot it.

There are other obstacles, too. Each level has a couple black holes Bubbles can safely move over only if she is swinging past it while holding a pole. You can't just avoid them since there are often ingots right next to them. In such situations you have to be careful to swing by rather than run right over them. Each stage also has hidden rubber bands between certain poles, which appear like traps when Bubbles first hits them. These get in her way, forcing her to go around and exposing her to urchins and black holes.

Like most 80's games, when you run out of lives (you start with five), it's Game Over. After a couple hours, I've only been able to make it to the fifth stage (orange). If I ever beat it, I'll reach the bonus round, where every space has an ingot. You try to reveal them all within 30 seconds. After that, like in arcade games, the game loops, but with a twist. You skip the first stage (pink), advancing straight to the second (green), but with a different pattern to uncover. Each stage has four patterns, so four cycles through is 21 stages (including the bonus rounds). At that point, the game starts over at the green stage, but now the ingots first have to be discovered, then passed over again to make them shiny. If you go over an ingot a third time, it reverts to dull, necessitating a fourth pass! All told, there are 41 stages to complete, though it keeps looping.

Like arcade titles in the 80's, this type of looping game was points-based. The goal wasn't to "beat" the game but to set a high score, which is displayed on the title screen until the system is turned off. According to Twin Galaxies, a high score of 1,022,300 was set by Tom Votova in 2005. He says the run took less than three hours, and you can watch the end of it on YouTube.

One nice feature is that it has simultaneous two player, and the two players bounce off each other if they collide. Having a second person to play it with makes it a little more fun. My daughters only lasted a few minutes playing it with me, but the 10 y.o. said she'd play it again. 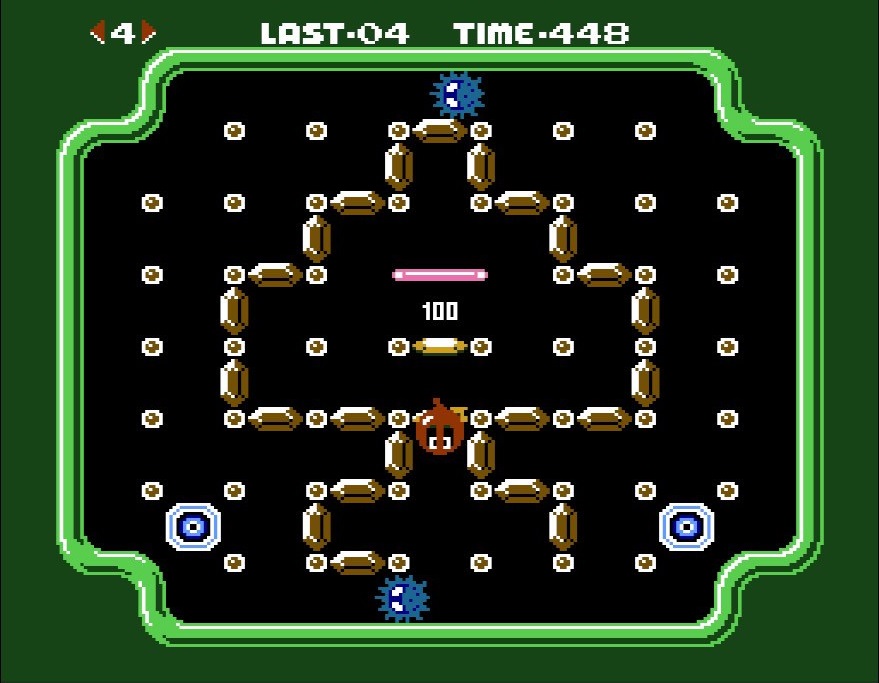 Clu Clu Land is interesting and definitely has replayability, but I didn't have much fun playing it. Like 80's arcade games, it's an endless grind, though at least the patterns change. I'll probably pick it up again some day, but replaying it for hours is not my idea of a good time. I suspect the situation wasn't much different in 1985. This is one of those games you play for a few minutes as a change of pace, until you remember how frustrating it it and turn it off. 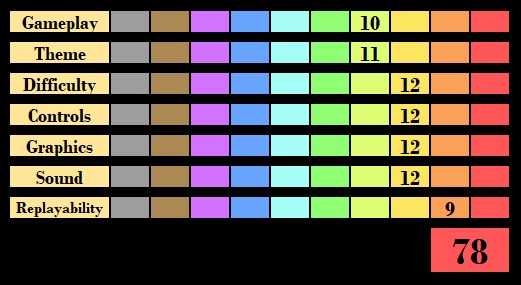 Grade: C+
Linked Reviews
"Unfortunately, the finicky controls and steep difficulty curve result in a game that can only be recommended to the most skilled of retro gamers."
— Marcel van Duyn, Nintendo Life, 5/10
"This is a fun game, but it can get a little awkward having to spin around each post to get the coins to appear."
— Pat Contri, Ultimate Nintendo: Guide to the NES Library, 3.5/5
"A challenging, fast-paced, highly technical take on the maze game—not so friendly, but definitely a game that demands practice and mastery."
— Jeremy Parish, NES Works 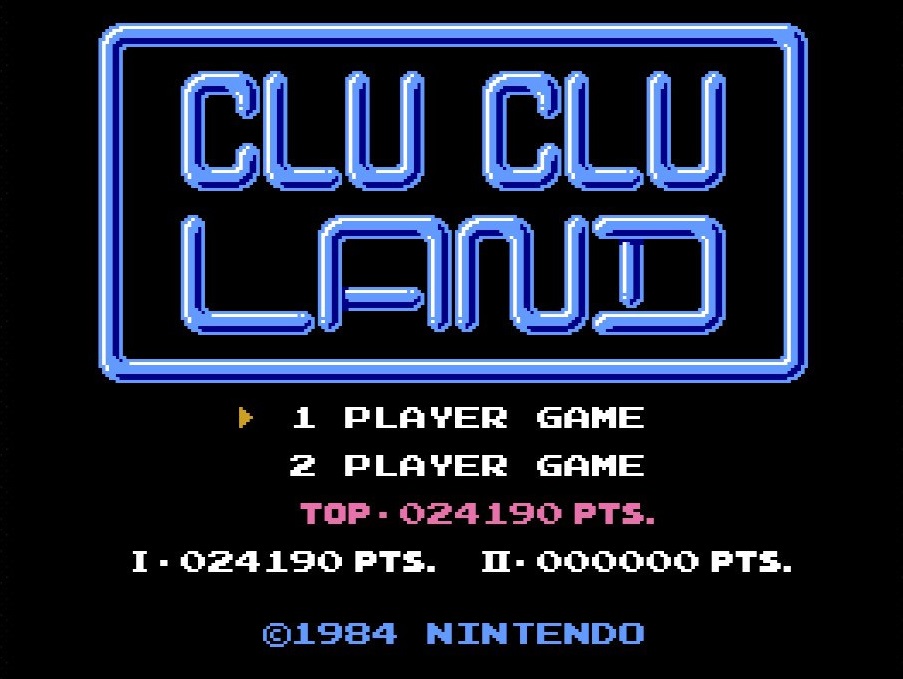