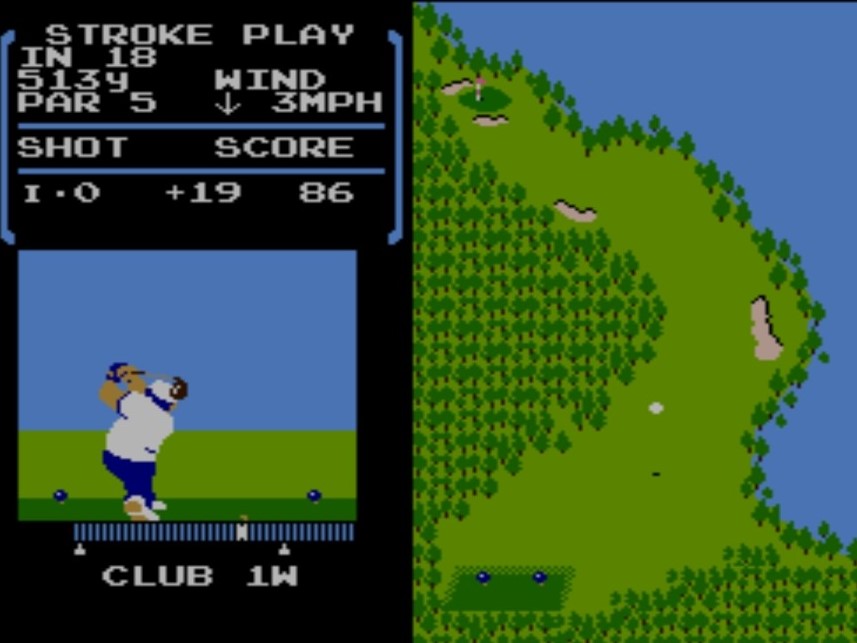 Golf, like the NES's other sports launch titles, is a primitive though competent simulation of its namesake.
In Golf, if you have a human opponent, you choose between match play (one point per hole you win) and stroke play (total score). When playing alone, Golf gives you no choices at all. There are no golfers to choose from. You must play as Mario (if he were just some schmo). There are no courses to choose from: every time it's the same eighteen holes. There are no difficulty modes or customizations. The golf simulation itself is basic but good. It doesn't suggest an appropriate club for you, so you need to know the basics of golf. I don't mind this because it makes you think instead of using whatever you're handed. The manual includes a chart of the maximum distance each club hits. Woods (W) drive the ball far down the fairway, whereas irons (I) hit the ball higher into the air for shorter distances. The lower the club number, the farther the distance. The strongest club is the driver (which the game labels 1W instead of, say, DR). The sand wedge (SW) is an open-faced club designed to bounce the ball out of a sand trap. The pitching wedge (PW) is for chipping the ball onto the green. I found the putter (PT) more reliable for getting onto the green when I was right next to it, because the pitching wedge would hit it over the green.
I spent my first playthrough practicing the controls, which require good reflexes. Your backswing is represented by a meter, with a cursor moving left. For maximum distance, you press A when it touches the left edge. Your downswing is represented by the cursor moving back to the starting position. Pressing A at the starting mark hits the ball straight ahead. If you press A after the mark, you hook the ball, meaning it will go to the left. If you press A after the starting position, you slice the ball, sending it rightward. Aiming is unfortunately limited to discrete options: straight ahead, left, farther left, right, or farther right. You could almost see this as another positive in that it forces you to get creative with hooks and slices. 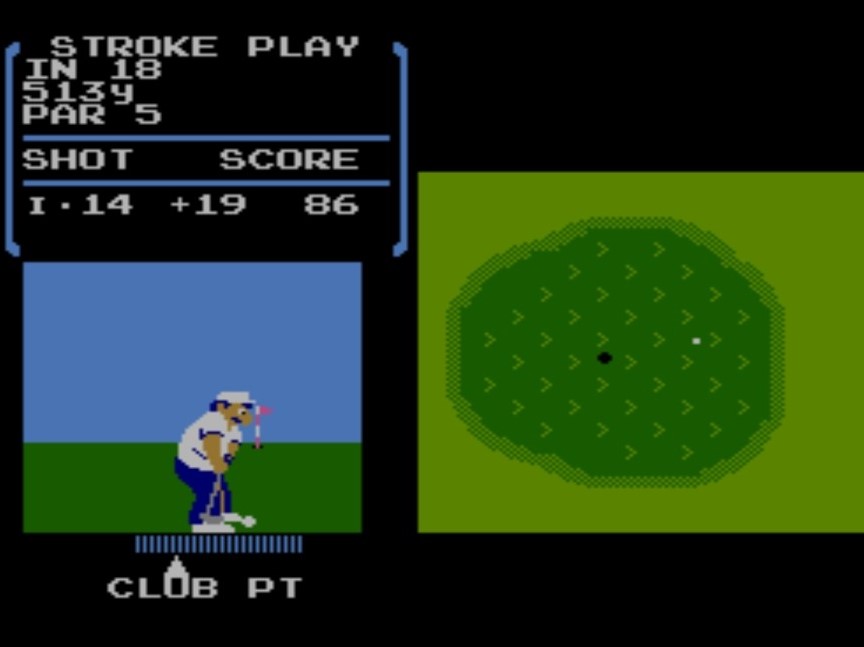 The goal in Golf is the same as in the sport: to get the lowest score possible. Holes feature obstacles to make this almost as frustrating as actual golf: trees, water, sand traps, and "out of bounds" areas to the far left and right. Landing the ball in water or out of bounds costs you a penalty stroke. Some of the holes contain challenges you would not see in real life, such as hitting the ball between islands or over a forest! There's also wind (though I played twice without noticing it). Adjusting your aim based on the wind strength and direction adds an additional layer of planning.
On the green, the game switches to an overhead view with the ball already in its final place (later golf games would show it bounce and roll to a stop). After you start your putt, you press A just once more. The longer you wait, the harder you hit the ball. Success in your short game requires paying attention to the green's slope, as indicated by arrows. The ball will roll in the direction indicated, so you may need to aim to the left or right of the hole. When putting downhill, use a short stroke, lest the ball blast over the hole. If the ball is on the lip of the hole, you have to double-tap A with lightning speed to tap it in!
Golf may be the only NES game that has no music at all. The ball makes noise when you hit it and as it sails through the air, but that's it. The graphics are basic, but when seen through nostalgic eyes they show that early NES charm.
Golf enthusiasts who played video games probably thought this game was awesome in 1985. However, it was superseded by half a dozen later golf sims on the NES, such as Lee Travino's Fighting Golf (which I grew up with) and NES Open Tournament Golf. As a result, there's no reason to play the original Golf anymore. Still, it deserves credit for being the first on the 8-bit scene. 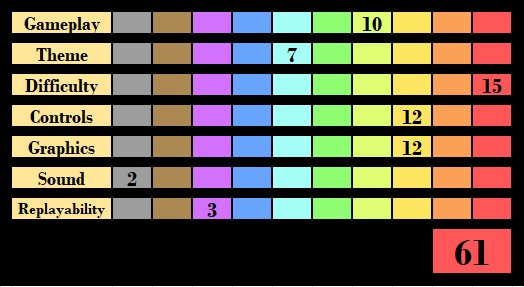 Grade: D-
Linked Reviews
"It may have been a stroke of genius in 1985, but a massive range of superior products deftly wedge their way between this game and a recommendation."
— Stephen Kelly, Nintendo Life, 4/10
"Golf rarely sees much praise for what it accomplished, but unassuming as it may look today, this really was Nintendo at its best."
— Jeremy Parish, NES Works
"There's just no real depth to be had here with only one course featured."
— Pat Contri, Ultimate Nintendo: Guide to the NES Library, 2/5