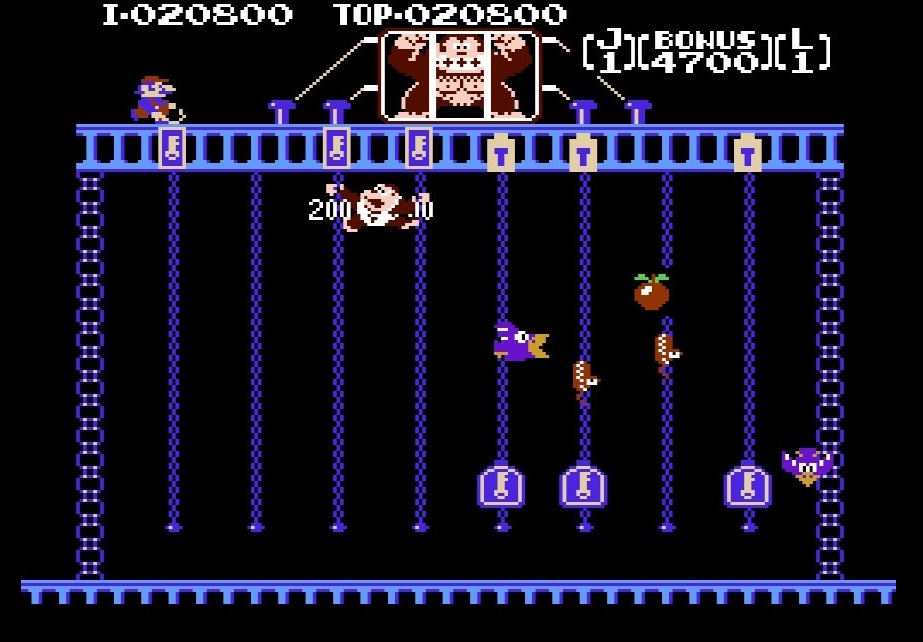 Donkey Kong Jr. may not be as famous as its parent, but as a child I preferred it, perhaps because I identified with the hero being a child himself, on a journey to rescue his father. Or maybe I just liked it because it's easier!

Donkey Kong Jr. hit arcades in 1982. As a sequel, it wasn't groundbreaking, and Nintendo sold only a fraction as many as the original. Nevertheless, it mixed up the formula enough to stand on its own. In addition to some platforming, it has a lot of vine-climbing. DK Jr. can climb a single vine or two at once, with his arms spread. He can slide down a single vine quickly, but to ascend quicker, two vines are better. Unfortunately, the vine-climbing is not especially fun, which is probably why this game didn't spawn an entirely-new genre of games called "climbers"!

The story is that Mario has DK in a cage, so his son must rescue him. The opening scene (sadly not included in the NES version due to limited storage capacity) actually shows two Marios! (Maybe the other one is Luigi in Mario's outfit.) Mario keeps unleashing enemies called Snapjaws at Junior. Apparently these are bear traps with eyes, but I always thought they were alligator-like creatures. Anyway, the red ones go up and down vines slowly, but the blue ones are fast and descend all the way to the bottom of the screen. Junior can drop fruit on enemies to destroy them, if you time it right.

Donkey Kong Jr. uses the same weird level rotation system as the original, again with four levels. The first and most common is fairly easy, a mix of platforming and climbing. As in DK, the second is the "boss stage" and has a very similar premise. Instead of removing rivets, Junior must push keys up chains into locks. In addition to Snapjaws, he must watch out for birds. When all the locks are unlocked, the platform Mario is on falls (sweet revenge!). Fortunately, Junior somehow catches his enormous father. In the arcade version, Donkey Kong's massive foot then kicks Mario through the air, but like all the cut-scenes, this is not in the NES version. 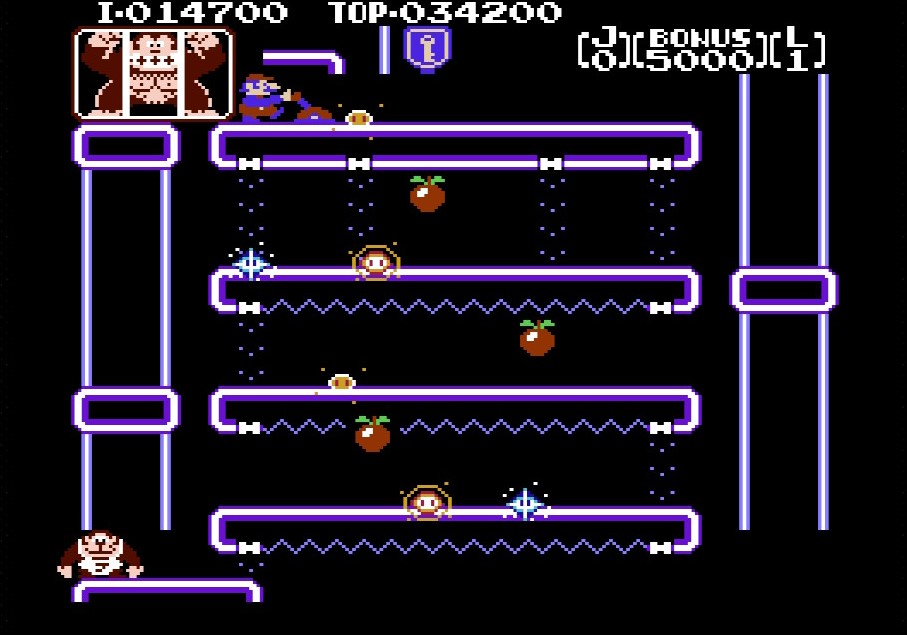 The third-most-common stage is very similar to the first stage, but there are some moving platforms and a spring. If you hold down A with the right timing, Junior bounces extra high off the spring and can make it to a higher moving platform. The top half of the level is tricky because of a steady stream of Nitpickers Mario keeps sending. Finally, the rarest stage is this game's equivalent to DK's cement factory. It's like a giant electrical circuit, with anthropomorphic Sparks moving along them.

Donkey Kong Jr., like the original, is tough. The first two stages are okay, but in the second loop, the enemies are fast and many. I've never made it to the third loop in either game (which means I've never even seen the circuit and cement factory stages)

The NES conversion, however, is much easier. Not only do the enemies start out slower, but Junior moves about twice as quickly. Now he can zip between vines to avoid Snapjaws with ease. After playing the NES version, his arcade self feels like he's moving through molasses!

The low difficulty of the NES version means you'll have no trouble clearing all four stages (it uses the Japanese, linear level order). Thankfully, they did manage to squeeze all four levels into this game! The sprites look good, albeit smaller and less colorful.

Donkey Kong Jr. on the NES is a top-notch port of a classic arcade sequel. Its biggest shortcoming is the inherently-limited nature of early arcade games, which is arguably exacerbated by Junior's rapid speed on the NES. On the other hand, the faster, easier gameplay suits the game's "childish" nature. 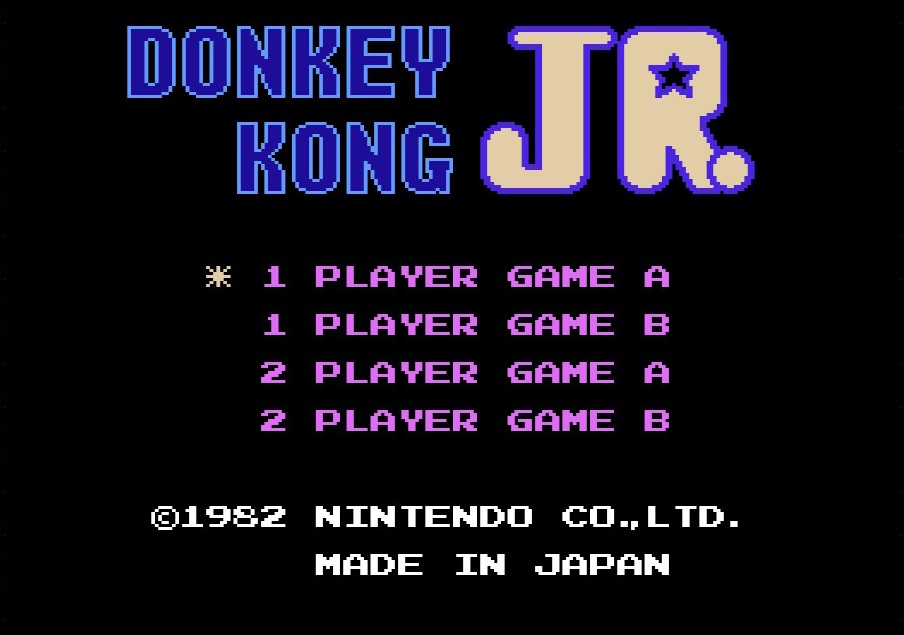 Linked Reviews
"Donkey Kong Jr. is an 8-bit outing whose age is starting to show. While charming, it tends to be a bit too rough around the edges."
— Ron DelVillano, NintendoLife, 4/10

"Jr. pushed the genre forward while also presenting a sequel that was very different and a step up from the original in adding the climbing and mechanical elements. This helped establish and popularize more than simply running and jumping in platform games."
— Pat Contri, Ultimate Nintendo: Guide to the NES Library, 4.5/5
"It's a meaningful little piece of Nintendo history, though far less significant in the grand scheme of things than its predecessor. And it's less fun, too."
— Jeremy Parish, NES Works 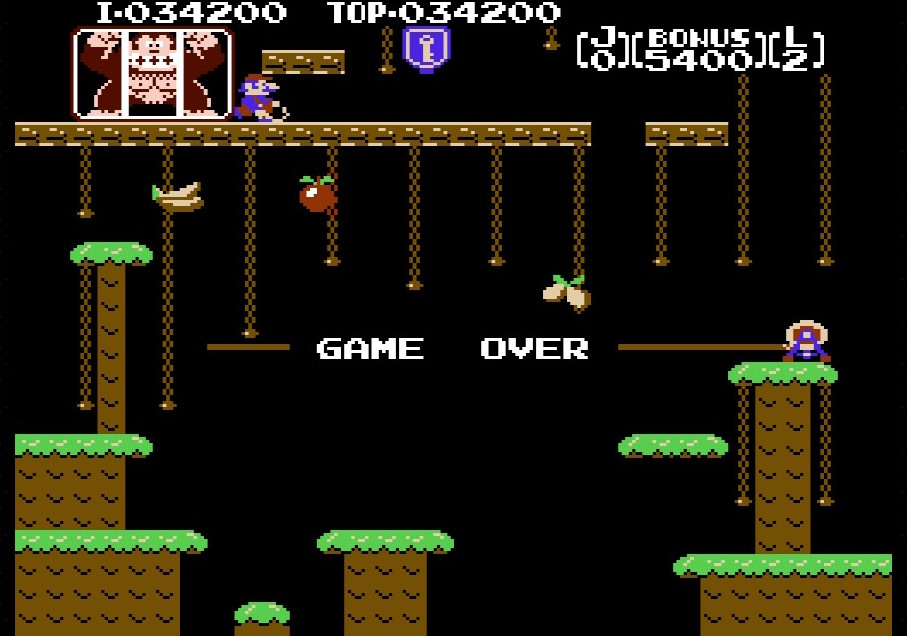