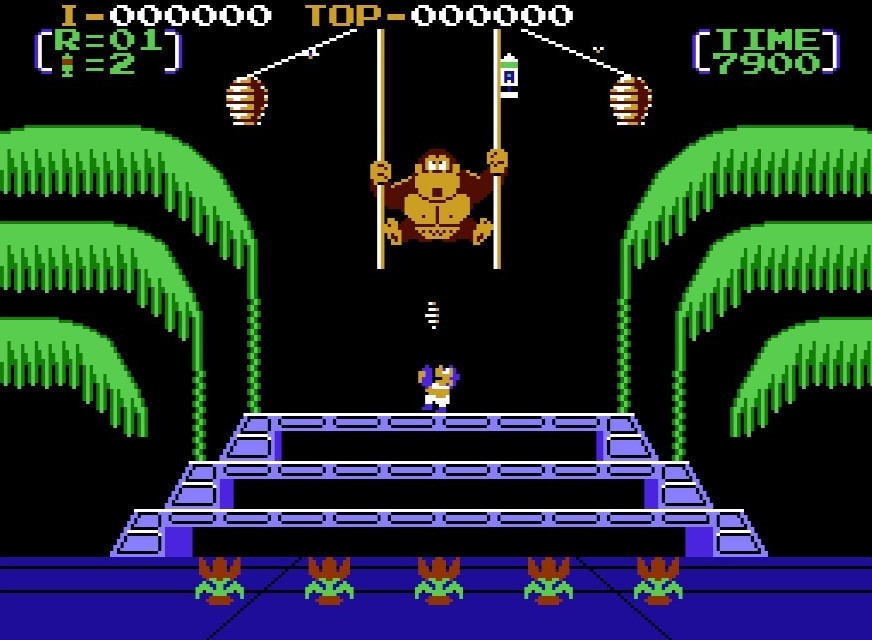 Donkey Kong 3 may be the video-game equivalent of The Godfather, Part III. After two Donkey Kong Classics, Nintendo put out something of a dud. It didn't help that DK 3 hit arcades in 1983, the year when the bottom fell out of both the arcade and home-console markets. This bad timing may have doomed an otherwise decent game.
DK 3 changes out Mario for an exterminator named Stanley (from the Game & Watch game Greenhouse). The game is unique in that it combines platforming with vertical shooting. Stanley can jump up and down between three platforms. His weapon is a can of bug spray with which to shoot various bees and other critters, but he can only shoot two sprays at a time, and it has limited range.
A screen can be cleared either by destroying all insects or by forcing a dangling DK to the top of the screen by spraying him repeatedly. Even if you focus on the bugs, you need to spray DK occasionally or he will fall on you. Bonus points are obtained by preventing the bees from stealing five vegetables at the bottom of the screen.
Once per life (not stage), DK knocks down a Super Spray Can, which temporarily makes Stanley's attack full range, rapid, and powerful. This recurring power-up makes the game considerably easier than the first two of the series. If you can make it to the twelfth screen (ninth in the NES version), a tricky new enemy appears (the Buzzbee), which charges horizontally at Stanley. 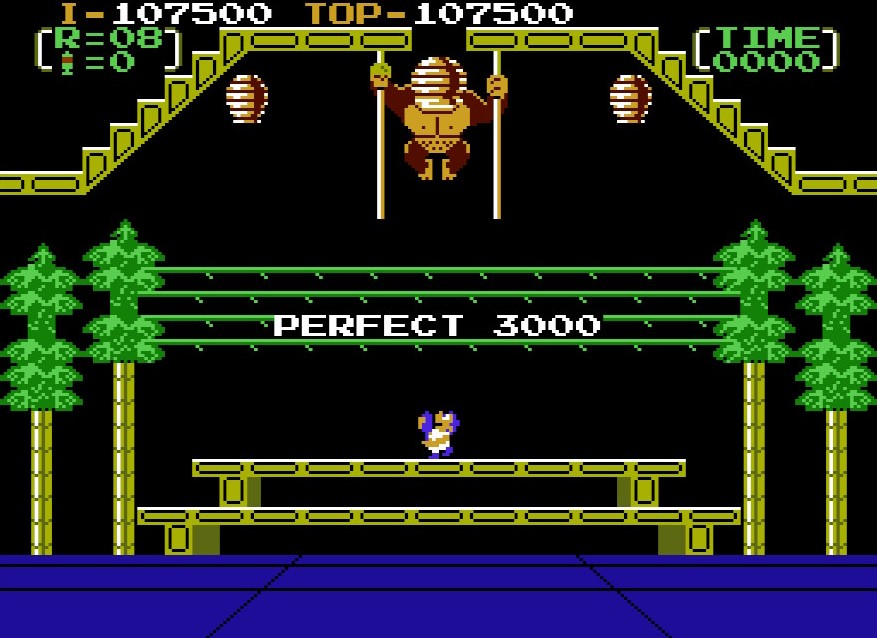 The game only has three different levels. The "boss stage" is the most interesting because DK throws coconuts at you! It's especially in this stage you have to avoid shooting little worms called Creepies. They can't be destroyed (except by the Super Spray), but instead freeze temporarily when shot. When in front of DK, they act like a shield, so you have to shoot around them. When you finally get DK to the top, his head gets stuck in a beehive. In the arcade version, he then falls and Stanley does a dance. Sadly, these little animations were lost in the conversion to NES. Other than that, though, it's a very serviceable port (even if it can't quite measure up graphically).
There's not much here, but it's a fun game all the same. DK 3 may be the black sheep of the series, but it's not actually bad. Nintendo deserves credit for trying something different with the third outing, even if the end result was ultimately less enjoyable than a straight-up shooter like Galaga.
Grade: B
Gameplay: Fun, but perhaps not for everyone (16/20)
Theme: Interesting concept and characters, if a bit generic (16/20)
Controls: Controls are smooth and let you do what you want (15/15)
Difficulty: Too easy, little challenge (12/15)
Graphics: Good-looking, if a bit lackluster (12/15)
Sound: Several solid musical pieces (12/15) 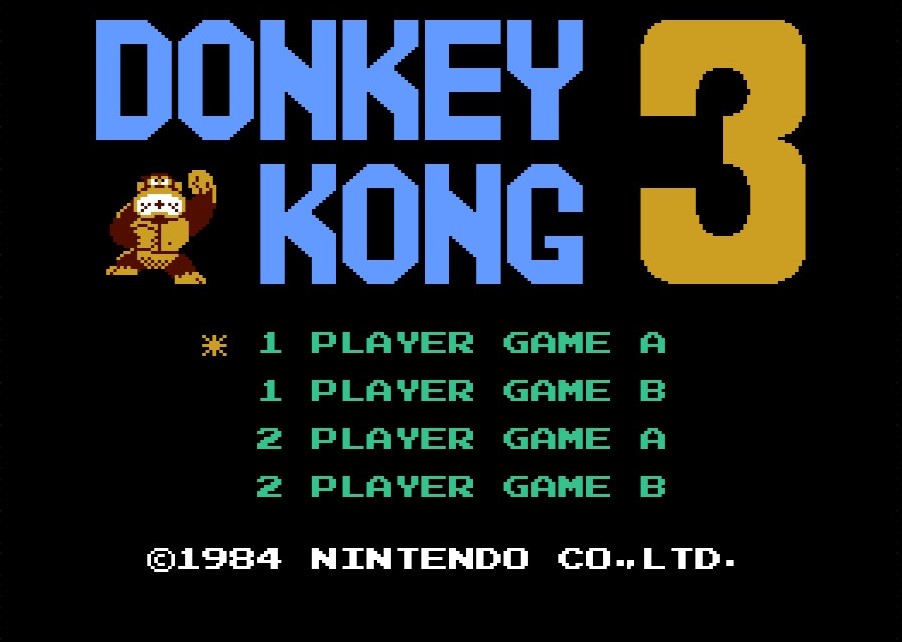 Linked Reviews
"It's not a timeless classic like the original Donkey Kong, but the great ape's third outing still has plenty to recommend for retro fans. It's very simple fun, with a unique shooter/platformer gameplay mix."
— Morgan Sleeper, NintendoLife, 6/10
"Donkey Kong 3 is a strange departure from the gameplay of its predecessors, but unfortunately it just didn't turn out very well"
— Marcel van Duyn, NintendoLife, 4/10
"I understand taking creative risks, but this game was so far removed from the others that I still scratch my head today when I think about it."
— Pat Contri, Ultimate Nintendo: Guide to the NES Library, 2/5
"It's a fast-paced and frantic game, and as a sequel to Space Firebird it's pretty impressive. As a sequel to Donkey Kong, though, it feels a little misaimed."
— Jeremy Parish, NES Works 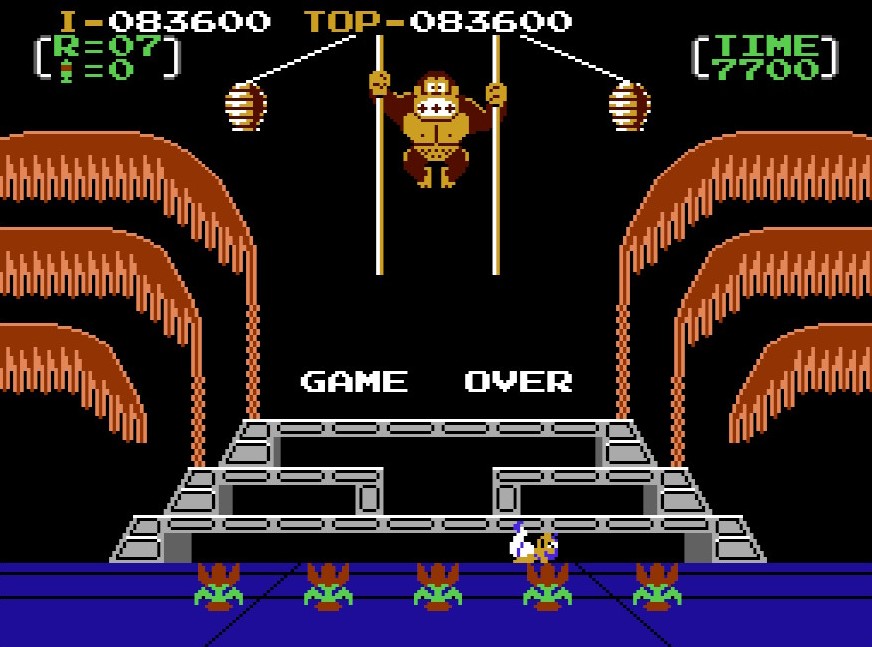