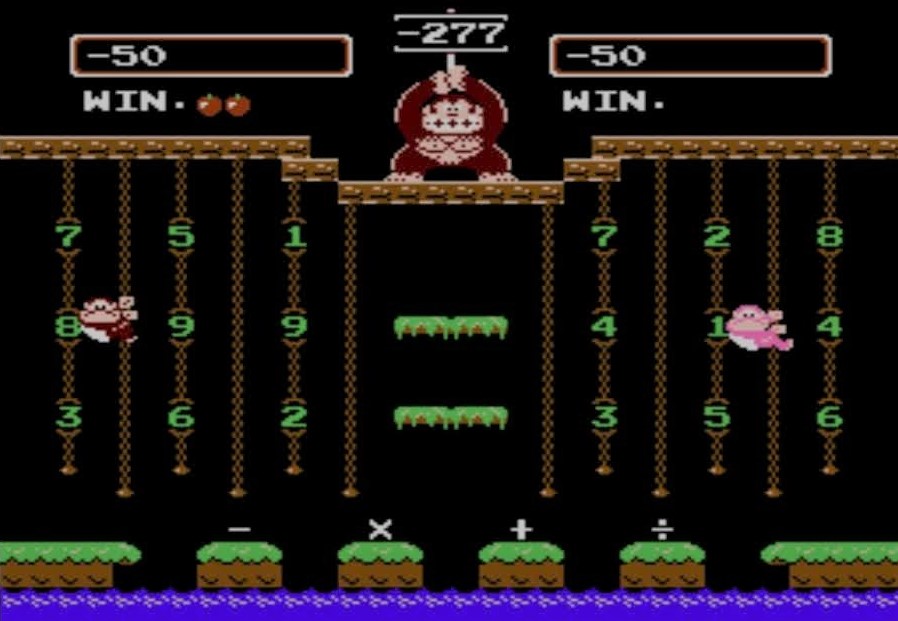 To market the Famicom in mid-80's America, when video game had become a dirty word to retailers, Nintendo branded it an "Entertainment System." Advertising strongly emphasized the R.O.B. and Light Gun. It wasn't a video game system, it was a fancy robot and video gun toy! Which also happened to play video games. This is also why they redesigned it so that the cartridge went into a hidden slot, so that it looked like a VCR instead of an Atari VCS.

Similarly, Donkey Kong Jr. Math was supposed to prove the NES could also be educational. All "Black Box" games were divided into series, but DK Jr. Math ended up being the sole title in the "Education Series"! However, it wasn't Nintendo's only foray into educational gaming. In 1994, they released five educational titles starring Mario for the Super Nintendo, two of which also appeared on the NES (Mario Is Missing! and Mario's Time Machine).

The main game of DK Jr. Math ("Calculate") works with one or two players. The second player (a pink version of Junior!) is always there, but if you play by yourself, he just sits there. The game is better with a second player since it's a race. You can choose an easier mode (A) or a harder mode (B), which uses larger numbers as well as negative numbers.

Your goal is to use arithmetic to make the number held up by Donkey Kong. Numbers from one to nine randomly appear along vines, with four operator symbols on platforms. You move Junior to a number, then an operator, then a second number. The sum or product of your numbers is then displayed at the top of the screen. Then you select a new operator and another number, and your number at the top is changed accordingly. For example, if you select 9, then ×, then 8, 72 shows at the top. Then if you select +, followed by 2, your number becomes 74. The first player to make their number equal to the target receives an apple. The first player to get five apples wins.

The other game mode ("+-×÷ Exercise") has one player solve ten math problems. You select the type of problem from a menu of ten options: addition (2, 4, or 6 digits), subtraction (3, 4, or 6 digits), multiplication (1×1 or 3×2 digits), and division (2 digits). Once in the game, you increase or decrease the digits by moving Junior up and down vines. Each base is a different vine, so you start on the rightmost vine, then go left one vine for the tens, left another vine for the hundreds, etc. If you get a problem wrong, you have to fix it to proceed. If you get a problem right the first try and do it quickly, you can score up to 100 points, Unless you've practiced long division recently, you may find scoring the maximum possible 1000 points in that mode difficult! Nor can you use a calculator, since you fill out the calculation digit by digit manually. Just like in school, you have to show your work! Since it's an educational title, there's no way to "beat" the game, although scoring 1000 points in each problem type would exhaust what the game has to offer. The game doesn't have anything beyond two-digit long division, so it's only suitable for elementary-age children. 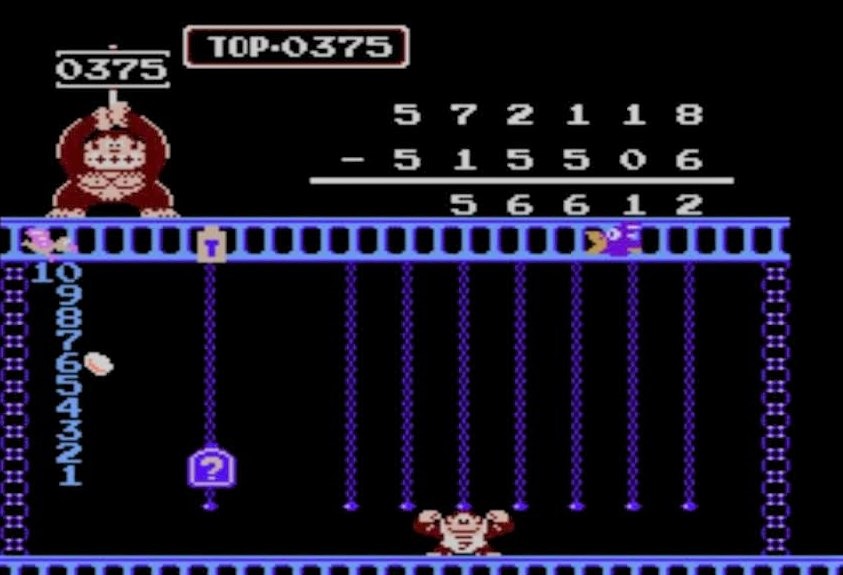 The game's first mode is sort of fun if you have a second player, but the other mode is more effective as math practice. I had both my 10-year-old and 8-year-old play this. The older gave it a B because she thought it was good, "but the controls hard to get used to," which is true. The younger gave it a C+ and commented that playing it would be more fun than doing math problems normally.

The concept of educational games goes back to the early days of video gaming. One of the very first games was The Oregon Trail, which has had a long afterlife! Computers have had a huge effect on education, but not because of games. Video games aren't especially helpful to teachers. They can't replace traditional instruction and practice. Games are not part of work; they are for entertainment during free time. As such, educational video games don't really make sense; children would rather play normal games when they are allowed to do so after school. Nevertheless, DK Jr. Math achieved what Nintendo wanted (which was primarily a marketing ploy), so by that metric it was a success! 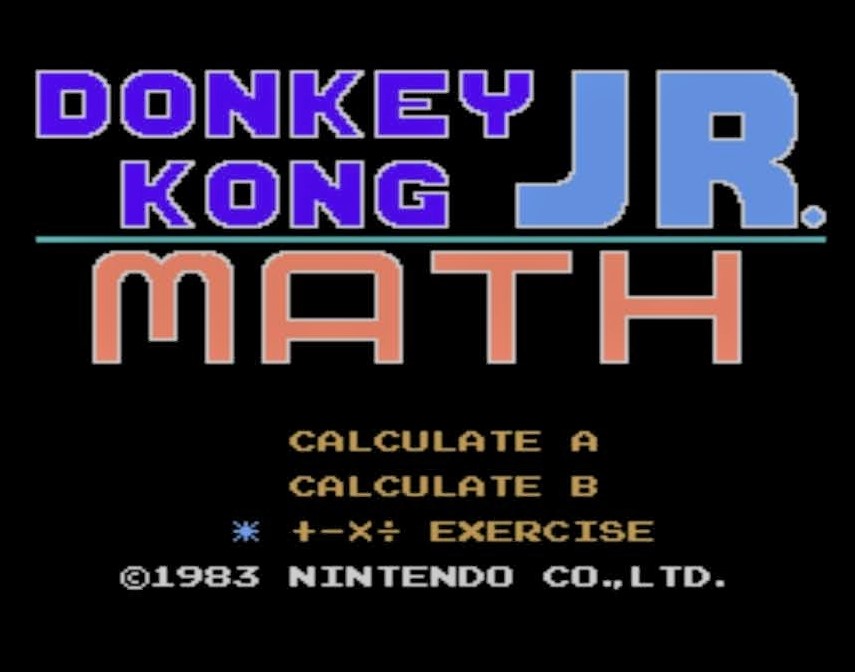 "While it may be a little helpful in learning arithmetic, the experience is shallow and not too interesting as an actual game."
— Pat Contri, Ultimate Nintendo: Guide to the NES Library, 2/5

"It's a curiosity at best, a historical relic of Nintendo's early days, when they hadn't yet landed on the concept of quality and polish as the primary distinguishing traits of their software."
— Jeremy Parish, NES Works