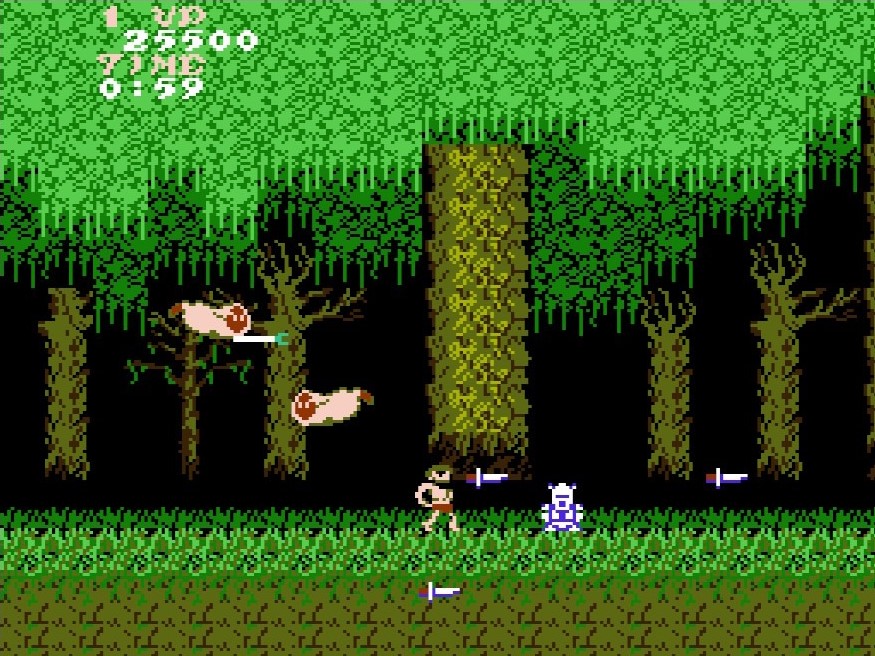 Ghosts 'n Goblins is a port of the 1985 arcade game by Capcom, which has become famous for its punishing difficulty. Its legacy is strong: it was included on the NES Classic and just got a reboot in the form of Ghosts 'n Goblins Resurrection.

Ghosts 'n Goblins is an insanely difficult platformer. You control Arthur, a knight who must rescue Princess Prin Prin (short for Princess Princess Princess, one assumes). An opening cut scene (happily retained on the NES!) shows Satan himself kidnapping her. Interestingly, Satan is not the final boss, which is instead the demon Astaroth. Astaroth most notably appeared in the 16th-century play Doctor Faustus by Christopher Marlowe. It also appeared as a major boss in Final Fantasy II on the Famicom. This game is very demon-based — indeed, its Japanese title means "Demon World Village" (see this 2005 interview with the developer). Given that it also has enemies spattering blood, it's a wonder Nintendo of America licensed the game at all. They refused the puzzle game Devil World (but Europe got it). NOA's paranoia about religious content compelled them to make one change: the cross weapon needed to defeat Astaroth was changed to a projectile shield!

Ghosts 'n Goblins is a non-stop barrage of monsters. Arthur must defend himself using unlimited projectiles. He begins with lances, but these can be changed to daggers, torches, axes, or the aforementioned shields. The dagger is the only weapon change you want, because it's faster than the lance. The torch is the worst weapon because if it hits the ground, it creates a small fire. Since you can only ever throw two weapons at a time, you have to wait for the burning to stop to throw again. The axe is also poor. It flies through enemies, taking an extra second to hit the ground afterward, thus slowing your attack rate. The shield eliminates enemy projectiles, which is very useful, though it suffers from short range.

Arthur wears a suit of armor, but a single hit from an enemy removes it, reducing him to his boxer shorts! Another hit finishes him off. Every stage has a hidden suit of armor that appears when Arthur jumps at a random spot. Consult a guide to find out where these are because you'll need them!

The game has six stages before a final boss. The first stage isn't too hard. The mid-way mini-boss is a gargoyle called a Red Arremer. It seems hard at first because it swoops down at Arthur and takes three hits to destroy. Beating it is just a matter of practice. Happily, the first hidden armor is right after this fight. The stage one boss is a one-horned cyclops called Unicorn. He is easily defeated by repeated jumping and shooting. He sometimes shoots a fireball that Arthur can jump over. The first half of the second stage is not very hard, but the second half has a house filled with ogres called Big Men. These charge and spit flails at Arthur and take ten hits to destroy. It took me quite a few attempts to learn to get through the house. The rest of the stage is basic platforming, but the boss is two Unicorns. By this point I could really see where the game gets its nasty reputation. If you can reach the third stage (which treats you to new background music), you're doing well! The second half of the third stage contains multiple Red Arremers, who are now regular enemies. Through re-playing this half-stage for a full hour I learned that you can often charge the Red Arremers to take them out before they can attack. This stage is very hard and would be nigh impossible if it weren't for the inclusion of two hidden suits of armor, one right before the last Red Arremer and Dragon boss.

I used the rewind function to clear the last three stages just so I can see what they're about. Honestly, they're kind of generic. The platforming is not memorable; it's mostly a grind of monsters to be defeated through trial and error, as you learn the patterns. The sixth stage is particularly vicious, as you have to beat all the old bosses again, including two Satans. Ironically, the final boss, Astaroth, is easier. However, if you don't have the shield, you can't fight it and must return to level five to get it. Once you beat the game, you're told that it was all an "illusion devised by Satan" ("devised" is misspelled on the NES port!). To rescue the princess, you must beat the game a second time on a harder difficulty. I know this is an arcade game, but good grief! In his 2016 world record playthrough, Dustin Long lost his last life shortly after the true ending, after just one hour of play. If the best player in the world can survive for only an hour (on one quarter), you know it's hard.

Fortunately, the game has a generous continue system. Each stage (except the sixth, which is a short boss run) has a halfway point from which you continue. This makes the prospect of grinding through the whole game more reasonable, since you only have to pass each half-stage once! Although this game has become a cult classic, personally I don't think there is enough variety in the six stages to qualify it as a true classic.

The NES version is faithful to the original. The graphics aren't bad, but they are worse than the arcade. They changed the locations of the secrets, perhaps so arcade veterans would have to re-learn them. They also removed the extra lives you get at 20,000 and 70,000 points in favor of hidden 1-ups. I assume this was to make it more like a console game. There is also a hidden code to select your stage. (They should have just used passwords.)

Perhaps what's most significant about Ghosts 'n Goblins is that it was one of the first in a long line of stand-out thirty party titles for the NES. It was the combination of good first- and third-party games that made the NES the phenomenal system it became. Grade: B- 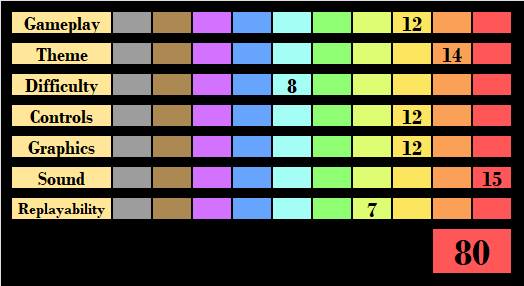 "It's unquestionably a classic, and its relentless difficulty only feeds into its charm."
— Philip J. Reed, NintendoLife, 7/10

"The difficulty is so extreme in places that it will turn off all but the most experienced players."
— Pat Contri, Ultimate Nintendo: Guide to the NES Library, 3/5

"Despite being a decidely less-than-ideal conversion of Ghosts 'n Goblins, the NES game sold well and tends to be fondly remembered by people who grew up with it."
— Jeremy Parish, NES Works 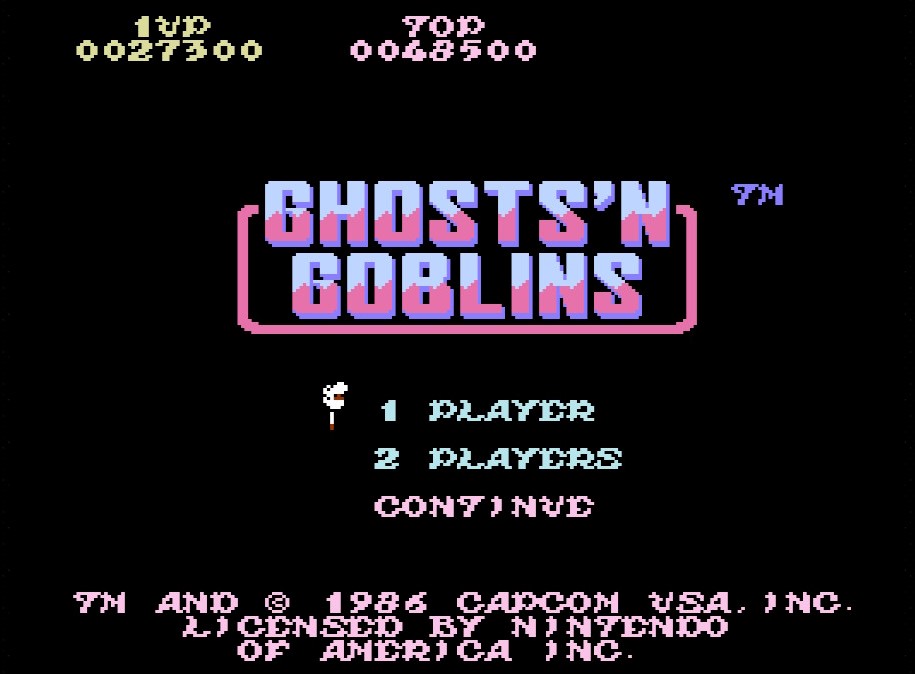