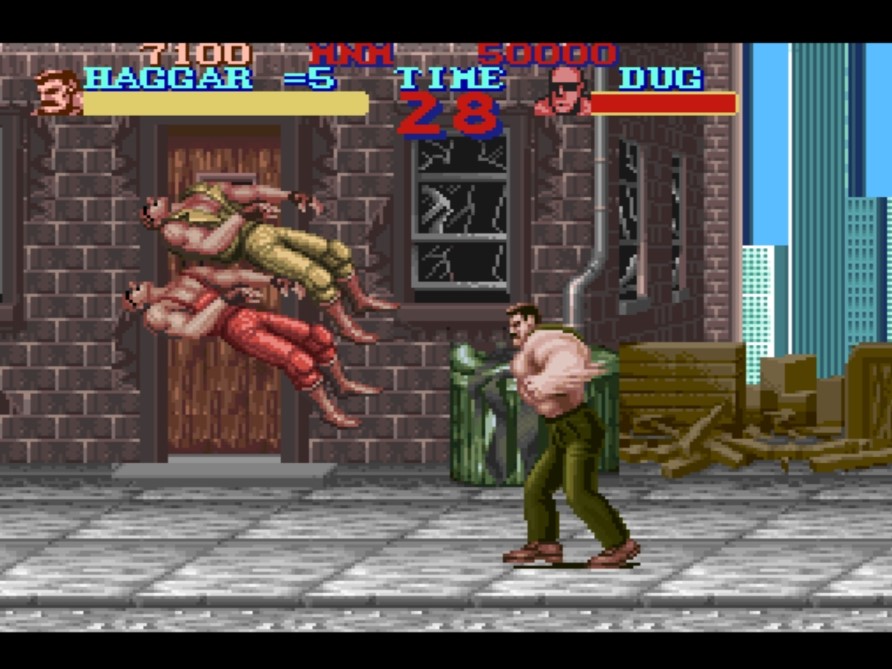 Thirty years ago Final Fight came out on the Super Nintendo. The game itself is older, being a port of a 1989 arcade hit. Although originally developed by Capcom as a sequel to Street Fighter, the name was changed since it's a "beat-'em-up," whereas Street Fighter was a fighting game (player v. player).
I've never played the arcade version, but I played one of the sequels on the SNES. It couldn't have been the original, which is one-player only. This is by far the game's biggest flaw. Beat-'em-ups aren't very fun by yourself; the whole point is to team up with a friend to take down all the enemies or die trying. Lack of a two-player option on console games was a common problem back then: Double Dragon was also one-player on NES.
Final Fight's biggest draw, I suppose, is you can choose from two characters, a huge lumberjack-type named Haggar, or a slimmer guy named Cody. Each has a slightly different move set. The arcade game had a third character, a ninja named Guy. He was so sorely missed that Capcom later released a second version of the game (rare in the U.S.) called Final Fight Guy that replaced Cody with Guy. Too little, too late.
I played Final Fight for about an hour and didn't enjoy it much. It's basically button-mashing. You walk up to an enemy and choose one of a small selection of possible attacks. Pressing Y throws a punch, or you jump first with B, then hit Y to do a jump kick. Alternately you can walk into the enemy to grab him, then press Y to attack. Haggar head-butts the enemy, whereas Cody knees them in the stomach. If you hold a direction while doing this, your character throws the enemy instead (in the case of Haggar, via a back drop). You can also press Y and B at the same time to do a special attack that costs a little of your own health. Each player has a couple other moves as well, such as Haggar's pile driver, but regardless which attack you choose, it's all pretty much the same.
Sometimes you find a weapon (like in Double Dragon), most commonly a knife, which mixes things up a bit. Haggar always throws the knife, but Cody can stab with it if an enemy is in range. Occasionally you encounter things like containers and stacks of tires that hide bits of food that restore health or bonus items like hats, which give you points. Given that the game has a final boss and definitive end, points mean nothing. Old habits die hard, though, and points lingered in video games well into the 90's.
Each stage is made up of sub-areas in which you beat up various thugs. Each stage ends with a boss. The first one, Damnd, whose name was changed to Thrasher for the SNES, is easy. He looks like Dog the Bounty Hunter. Dog—I mean Damnd—I mean Thrasher summons a few underlings to help him. The second one, Sodom is far harder, as he has two katanas and also charges at you. You won't be surprised to hear that for the SNES his name was changed to Katana! You can use his katana against him, and it's even called Masamune (like in Final Fantasy)! Apparently Guy, being a ninja, hits harder and faster with it, but as I mentioned he's sadly absent in this version.
I haven't yet made it to the third boss because, unfortunately, on the SNES you get only three continues! If you want to try again after that, you have to replay the whole game from the beginning. I played three or four times, and that was enough for me. I'd play it again only with someone else.
Another shortcoming of the SNES port is that it removed the fourth stage, reducing the total number to just five. Graphically and aurally, the game is fine. Compared to NES games, the huge sprites are very cool. This looks way better than, for example, the Double Dragon games. But for the most part I found the backgrounds and enemies forgettable. They aren't bad, but they aren't that great, either. The most interesting character both visually and to play is Haggar, who also happens to be the main character since it's his daughter who has been kidnapped by the gang. Yes, it's another old video game where men rescue a woman. 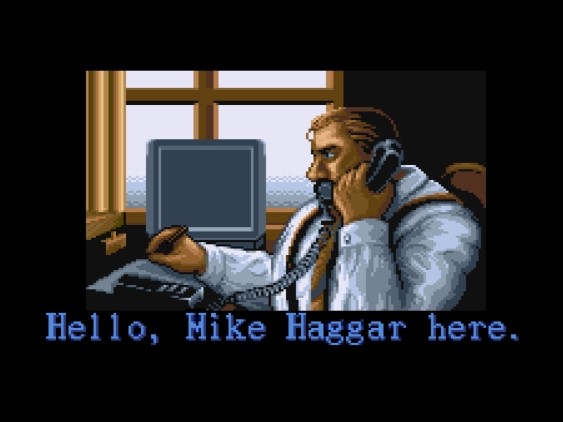 Final Fight is a two-button arcade game (X, A, R, and L are unused on the SNES) that could have been an NES game, except it couldn't handle it graphically. In fact, Final Fight did become an NES game: Mighty Final Fight was released on the NES a couple years later. It was a humorous chibi-style game that added experience points, and it included Guy! I look forward to playing it eventually, as it's by all accounts a good game.
This game was not made for me, but it's by no means bad. However, it really should have been two-player. The lack of that, of one of the three characters, and of one of the six stages all come together to make Final Fight for the SNES a disappointing port. 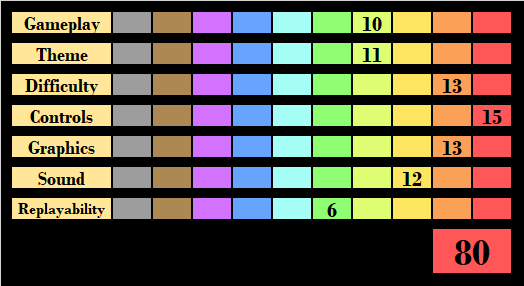 Grade: B-
Linked Reviews
"A game that's fun to play and worth a look, but disappointing in comparison to the iconic arcade unit."
— Steve Bowling, Nintendo Life, 7/10
"Having loved the arcade version, the stripped-down SNES port was a disappointment to me, especially with its missing two-player mode and not having my favorite character, Guy, as a selectable fighter."
— Pat Contri, Ultimate Nintendo: Guide to the SNES Library, 3.5/5
"It was an evolutionary brawler in its original coin-op form, taking the beat-'em-up structure of earlier titles like Double Dragon to the next level."
— IGN, #100 of Top 100
"Without its two-player mode, Final Fight doesn't have much going for it beyond the initial impression it gives."
— Jeremy Parish, Super NES Works 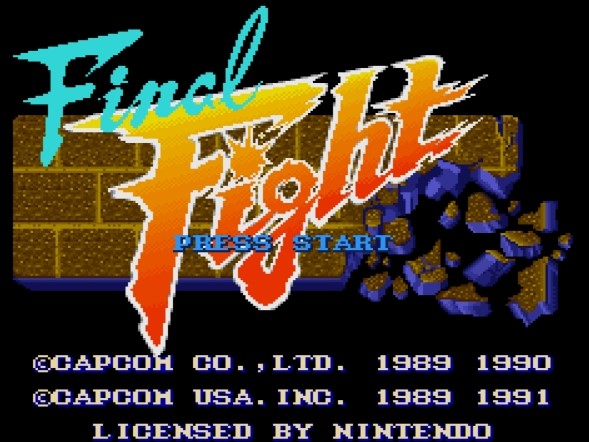