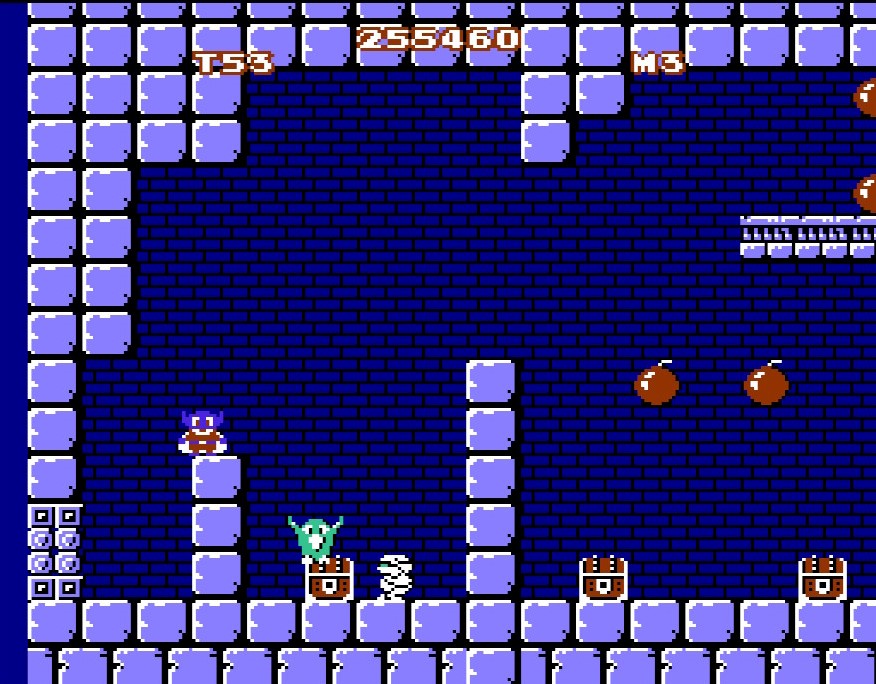 Mighty Bomb Jack is an NES-exclusive sequel to Bomb Jack, a 1984 arcade game by Tecmo. In both, the masked and caped hero, Jack, collects bombs while dodging enemies.

Mighty Bomb Jack is a weird game, in that it's about collecting bombs, something one would not normally do. Its main mechanic is a very high and versatile jump. If you hold ↓ while jumping, Jack jumps about halfway up the screen. The normal jump goes about three-fourths of the way up, and if you hold ↑ he goes all the way to the ceiling. You can stop his jump at any time by pressing A again. If you do this repeatedly, he flutters.

All of this means you have tremendous control over Jack's movement, which will come in handy when avoiding the many enemies, which both appear and move about at random. Jack has no attack and touching an enemy is instant death, so you'll be jumping a lot. You can scroll enemies off the screen to make them vanish, though they quickly re-spawn. The enemies are generic with esoteric names, like in most NES games. For example, the bird is called Rube and the mummy Tgee.

Mighty Bomb Jack contains sixteen main levels, each of which has two parts. First there is a scrolling level ("passage"), with horizontal and vertical segments connected via doors. At the end of the passage is an exit leading to a "Royal Palace room." These are the original Bomb Jack stages from the arcade game! Each is a single screen with 24 bombs, one of which has a lit fuse. I'd like to think he's defusing these rather than "collecting" them like the manual says. Although you can touch them in any order, if you follow the correct sequence (the lit fuse indicates which is next), Jack will bypass the next stage's passage entirely and go straight to the Royal Palace room. As a result, a very skilled player can skip every passage except the first one! However, it's easier said than done. Getting the bombs in order requires very precise control and the enemies are likely to get you in the attempt. In addition, if Jack dies in a Royal Palace room, he has to go back to the last passage he played!

Despite having a definite ending, Mighty Bomb Jack is designed in an arcade style, with numerous ways to earn extra points and secret passages to find. If you ignore points, much of the gameplay is rendered moot. For example, you can ignore the bombs in the passages, since they aren't needed to open the exit like they are in the Royal Palace rooms. In the passages, you are supposed to get them in the right order, because that way they provide progressively more points.

The passages also contain numerous treasure chests Jack can open by jumping off their lids. Many chests contain point-awarding items, but others hold Mighty Coins. Jack can spend these (press B) to power up. Spending one turns his outfit from red to blue, allowing him to open the locked (orange) treasure chests. Spending another while blue turns him pink, allowing him to open chests just by touching them. If you spend one while pink, he turns green and all enemies on screen turn into Gold Coins. These are worth 500 points each, and if you collect enough of them an Extra Coin will appear that gives Jack an extra life. Each Mighty Power fades after you press the jump button a few times (which you do a lot!). The game encourages you to spend the Mighty Coins anyway, because if you ever get a tenth, Jack is sent to the "torture room" full of enemies! He can only escape this by jumping 50 times, which is bizarre but also reinforces the game's focus on jumping.

Mighty Bomb Jack has multiple endings. The final stage ends with King Pamera's room, but if you found a Crystal Ball earlier in the game, it is followed by the Queen's room. If you found both Crystal Balls, this is followed by the Princess's room. According to the manual, the goal of the game is to rescue the Princess, who was kidnapped by the demon king "Belzebut" (a misspelling of Beelzebub, a Philistine god mentioned in the Bible). As such, you must get both Crystal Balls if you want to complete the game. However, there is yet another secret ending! If Jack found at least five Secret Coins during the game—which only appear while Jack is fully-powered in his green outfit—the Princess's room is followed by the royal treasure room. Regardless, there is no final battle with "Belzebut," who doesn't appear at all.

I assumed that, once I got used to the zany jumping mechanics, I would enjoy Mighty Bomb Jack. I was wrong. The stages aren't that interesting, and I don't like having to avoid all the enemies; I want to be able to shoot, stomp, whip, punch or kick them! The game is also really hard. Once you get a Game Over, that's it; there's no way to continue, just back to the beginning of the pyramid. (Did I mention the game takes place in a pyramid?) Rather than racing through the passages ignoring the bombs and chests, I think the best way to enjoy the game is to take your time and try to get a high score (or, if you prefer, the baffling "Game Deviation Value" it shows when you die). Unfortunately, the constantly spawning enemies make it hard to survive long enough to get into it. 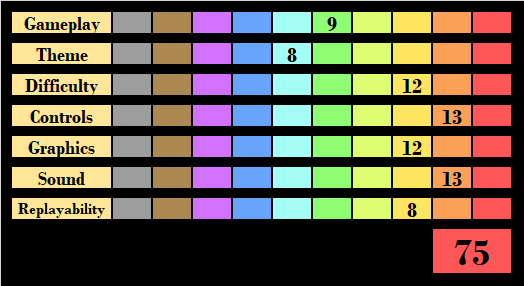 Linked Reviews
"The constant barrage of randomly-spawning enemies can be frustrating, the absence of continues means the Game Over screen is never far away, and the level design is largely uninteresting unless you're looking for secrets."
— Morgan Sleeper, NintendoLife, 6/10

"The difficulty ramps up fairly quickly and is not for the faint of heart, even with its light, cute appearance."
— Pat Contri, Ultimate Nintendo: Guide to the NES Library, 3/5

"Nowadays it's just too abstract and inexplicable for most people to want to bother with. The lack of continues and single-hit kills definitely don't help."
— Jeremy Parish, NES Works 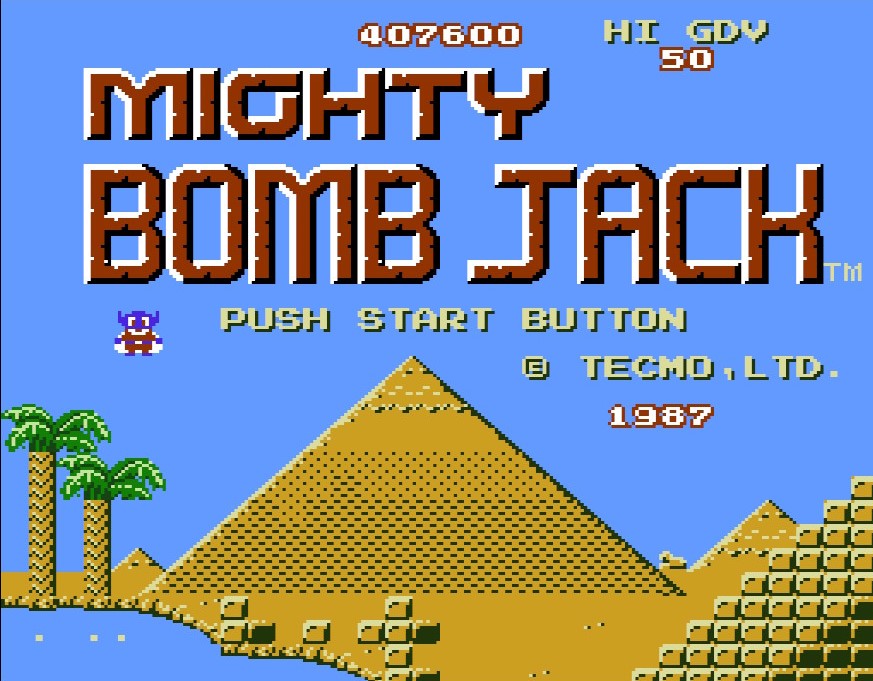