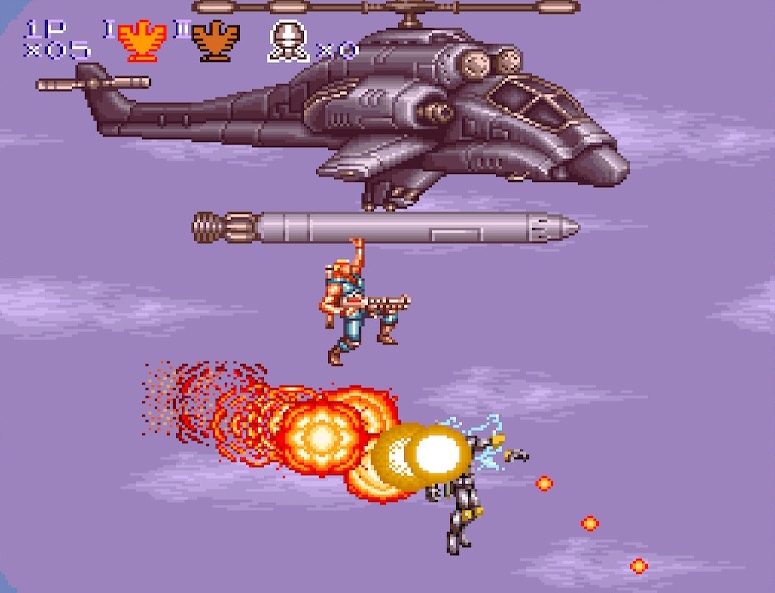 Thirty years ago today Konami published Contra III for the SNES, a sequel to the wildly popular Contra and Super C on the NES. Unlike those games, Contra III is not based on an arcade game but was made specially for the Super NES.

The Contra series is considered the pinnacle of the run-and-gun genre. Especially because of the high volume of alien enemies, the games are best enjoyed with two players. Interestingly, Contra III lets you choose between full-screen and split-screen, the latter letting the players separate. As with almost every SNES sequel, Contra III basically recreates the original NES game with 16-bit technology, audio, and visuals. Not having played it before, I was surprised to discover that it contains only six levels, two less than the NES games! That's a bit disappointing. It takes speed runners only twelve minutes.

In all the classic Contra games, the first player controls Bill and the second Lance, who seek vengeance for a devastating attack in the year 2636 by an alien enemy called the Red Falcon. Actually, there's a chronological discrepancy between the Japanese and American versions, because in America the setting for the NES game was changed to the present (i.e., 1987) to cash in on the popularity of the Rambo and Predator movies. (Meanwhile, in Europe everybody was changed into robots called "Probotectors"!) As a result, the American version of Contra III stars Jimbo and Sully, the descendents of Bill and Lance. (Why do they need to be descendents, anyway, and who can trace their lineage back seven hundred years!?) In the opening cinematic, Sully/Lance looks uncannily like Sylvester Stalone and says, "Let's attack aggressively." There's no exclamation point, so I imagine he says it dispassionately, as though laying out a carefully thought-out strategy.

Jimbo and Sully come equipped with two machine guns. These shoot very quickly and, like all the weapons, can be aimed in all eight directions of the d-pad. Still, you'll want to replace the machine guns whenever you can with the frequent weapon drops for which the Contra series is celebrated. These are crush, homing, spread, laser, and flamethrower. The best one may be spread, because it shoots five bullets at once in a wide spread. Homing is excellent as well. Crush has limited range and is slow, which makes it bad against normal enemies, but it does a lot of damage, which is good against stronger enemies and bosses. I dislike the laser because you can shoot only one at a time. The flamethrower has limited range but can be whipped about rapidly in any direction. The main reason the game is so fun is that all six weapons are fun. You can also pick up bombs, which when detonated (press A) destroy all enemies on screen. At certain points you will pick up a barrier that provides brief invincibility.

Another great aspect of Contra III is that you can hold one weapon in each hand and switch between them at any time by pressing X. As a result, you can keep one weapon as your main weapon and hold a second, utility weapon for later (for example, crush to use against the boss). When you lose a life, you also lose the weapon you were holding, but keep your other one—another nice feature.

To me the levels feel a bit generic, being post-apocalyptic cityscapes filled with alien hordes. The game does take advantage of the SNES's famous Mode 7 graphics. The second level is from an overhead perspective, as Jimbo and Sully navigate alien-infested, bombed-out streets. In this mode, you rotate your character by holding R or L. Holding both causes your character to spin in place with arms outstretched, firing both guns at once! The fourth level has our manly men riding a futuristic motorcycle and then catching a ride hanging from a helicopter, so the game covers all the clichés of the action movies it seeks to imitate. The fifth level is another overhead one, with dizzying sand that spins you around.

A highlight of the game is that every level has an interesting and unique boss fight. The third level, for example, ends with two Terminator-type robots, and when you defeat them, you face a gigantic one that pulls open hangar doors, sticks its head through, and breathes fire at you! When you defeat it, the doors slam shut, severing its head. 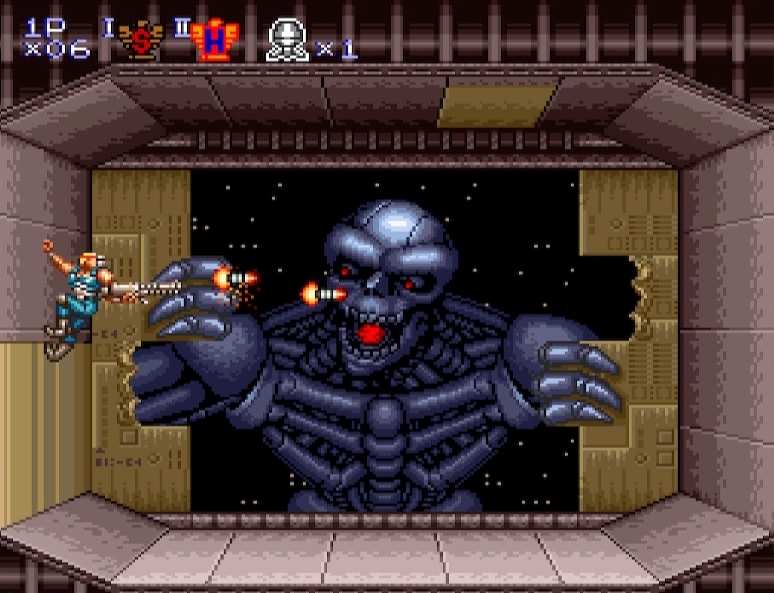 I haven't yet made it to the final level because, like the original, Contra III is hard. And unlike the original, you can't use the Konami Code to get 30 extra lives! You choose your starting lives from the Option menu: 3, 5, or 7. There are also three difficulty modes, but I find it difficult even on Easy with seven lives. On Easy, there are fewer enemies (the dogs don't attack you in the first stage, for example), they are weaker and shoot fewer bullets, bullets move more slowly, and bosses have less attacks and are slower. Paradoxically, though, the standard four continues are reduced to just two on Easy. I guess they didn't want to make the game too easy! The game's true ending can be seen only by completing Hard mode, which also features an additional, final form of the last boss. As such, only the best of the best will ever see the true ending. I have a hard time just beating the first stage on Hard.

There's not much else to say about Contra III. It's a short and straightforward game, but what it does, it does well. It's running-and-gunning at its purest, with those classic 16-bit songs and graphics. Good stuff!

Linked Reviews
"The action and excitement is backed by a wonderful soundtrack and the game remains fun to replay."
— Dave Frear, Nintendo Life, 9/10 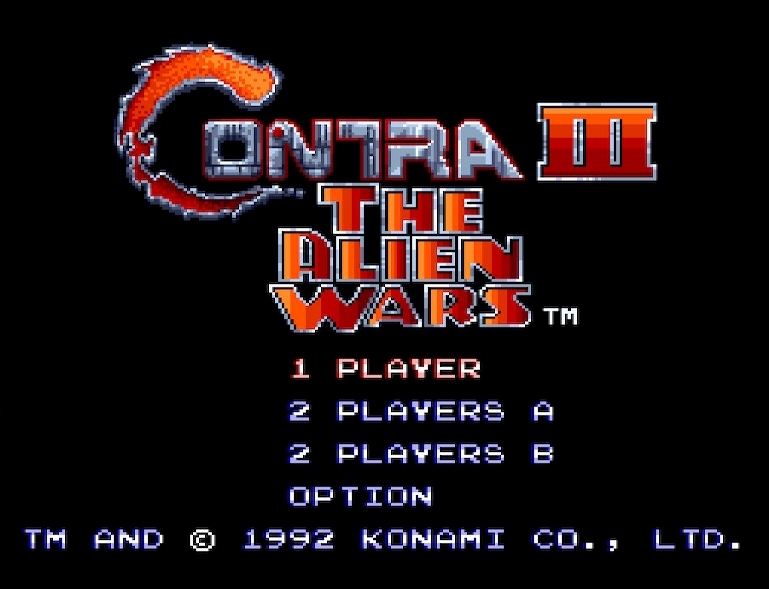