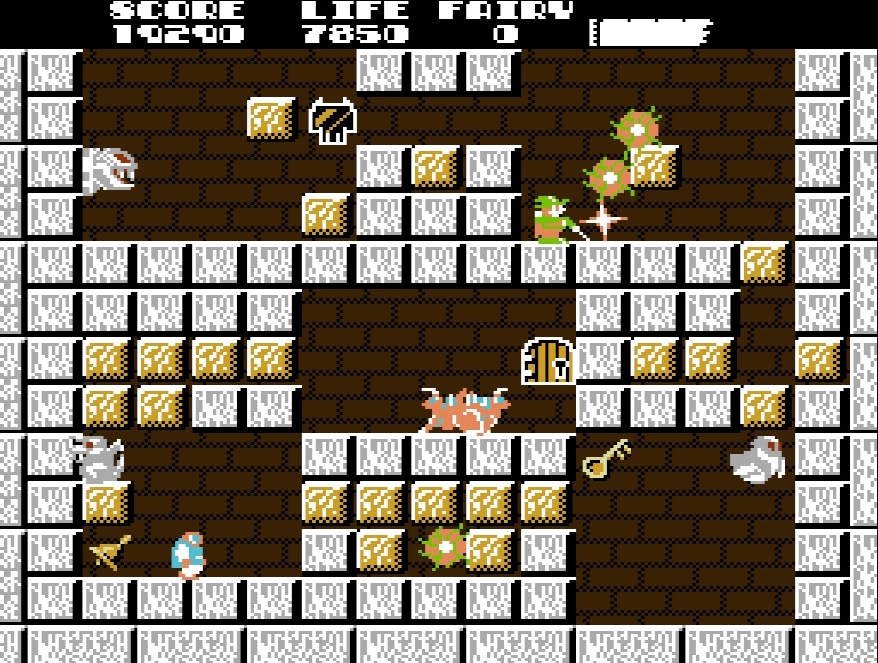 Solomon's Key is an NES port of the arcade game of the same name made by Tecmo in 1986. It's an action-puzzler (similar to The Adventures of Lolo), in which you navigate the wizard Dana through a series of single-screen labyrinths. Also, it's very hard.

In Solomon's Key, not only do you need to use your wits to devise a plan for acquiring the key and then getting to the door, you also need fast reflexes to dodge various creatures. These are your typical Gargoyles, Dragons, Goblins, Demons, and so forth. In some cases, you can trap the enemies with blocks, but since most can destroy blocks, Dana must move quickly. You need to learn their patterns. For instance, Sparks (as in several NES games) travel along an edge without changing direction. In general, all other monsters move in a direction until they encounter a block, which they break, then go back the way they came.

Dana can use his trusty magic wand (press A) to create a block in front of him, or, if one is already there, remove it. You can also affect the space below the space in front of him if you crouch (hold ↓) while using the wand. Blocks serve the dual purpose of being a barrier against enemies and a platform for Dana to jump upon. If an enemy is standing on a block and Dana removes it, it falls to its death.

The first several rooms are simple, but they become puzzling quickly. You must develop a route for each room that gets you to the key and the door in such a way that you will not get hit by enemies. There is a timer, and the faster you finish, the more bonus points you get. Success is achieved only through trial and error. Even if you check a game guide (there's no shame in that), you still need to practice, due to the speed with which you must execute the plan.

The game is full of power-ups, some in the open and others revealed by removing a block. Sometimes an item is hidden in an empty space, so you must first create, then remove a block to reveal it. Hand bells cause Faeries to appear; collect ten and you earn an extra life. Various bags of money and coins are worth points (this is an arcade game, remember).

More importantly, jars contain magical fireballs! Each can be shot once (press B). Blue jars contain small fireballs, which can destroy a single enemy. Orange jars contains super fireballs, which can mow down any number of baddies. Either way, the fireball dissipates after traveling a few spaces. You can upgrade their range by picking up jewels. A scroll in the corner displays how many fireballs you have available. The maximum capacity begins at three, but each time you pick up a scroll, it rises by one. Diamonds are worth points, but Dana can instead change them into something better with his wand! First it will turn into a blue jar (fireball), then a jewel, then coins. If you are already full on fireballs, you can get the jewel.

Dana can also find bottles. A grey bottle speeds up your timer in exchange for an increased time bonus. An orange bottle turns all enemies on the screen into bonus items. A multicolored jar upgrades one normal fireball into a super fireball. Finally, an orange bottle with an E on it gives Dana an extra life. If you're going for a high score, these extra lives will come in handy. If you're just trying to make it through levels, however, you can use the secret continue code (↑, A, and B) to continue as often as you want.

The NES version adds some collectibles the arcade version didn't have, such as golden wings that warp you ahead six stages. Every four stages there is a symbol of the Zodiac. If you collect it, you go to a bonus stage. Eight stages contain a Star of David (remember the game is named after King Solomon). If you miss any of them, no more will appear! Collecting four, six, then eight of them unlocks up to three bonus rooms. Two contain missing pages from the titular Solomon's Key (which is a book, not a key), and the third contains the Faerie Princess. There are four different endings, depending whether you acquire the pages, the princess, both, or neither. The game is so hard it's a triumph merely to finish! 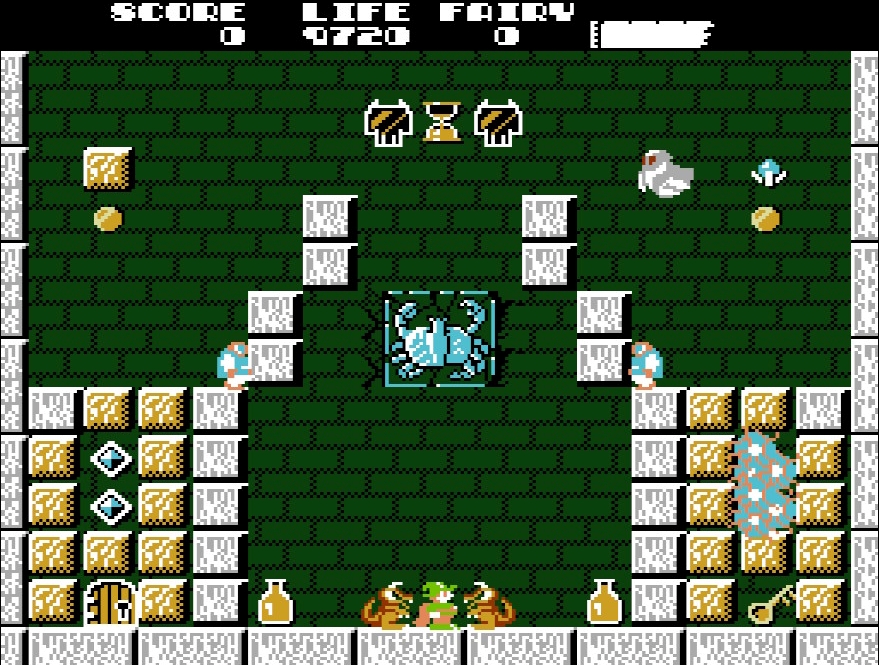 I'm stuck on the thirteenth level, which means I've completed a quarter of the game's 48 stages. This stage is a good example of what the game is like: Dana begins between two tall walls. Behind the left wall is the door, while the key rests behind the right wall. A pair of Salamanders fall from above, despawn a few seconds later, then generate again (via skull-shaped mirrors). A couple potions that turn all enemies into items buy Dana some time to create a staircase of blocks. With practice, I learned how to ascend to the top of the walls without getting hit by the Salamanders. At the top, a Ghost zips back and forth, but it is easily jumped. Past the right wall a Goblin paces back and forth. You need to remove the block he is standing on. Below this are several Sparks, which you will have to unleash to access the key. To protect Dana, I first made a wall of blocks. While the Sparks climbed it, I removed the bottom of my wall, then went down to the key. Most of the Sparks get stuck looping around the severed wall. At this point I need only go back up, get to the left side of the room, then go down to the door, which is guarded by a Goblin. Unfortunately, I keep getting hit by one of the Sparks or the Ghost in the process.

If I keep trying, I will eventually clear the level. The question is whether I want to. Do I enjoy working through these levels slowly and methodically, trying again and again? Many gamers enjoy this kind of challenge, but I'm not sure I do. It feels tedious, and I don't feel much sense of accomplishment when I finally clear another stage. It's more like "Here we go again," as I restart the process of trial-and-error.

Yet, despite the frustration, I keep coming back to the game! I thought I'd moved on, but then I watched a Games Done Quick speedrun and felt compelled to play again. I focused on refining my skills by playing from the beginning rather than trying to finish level 13. I would collect as many points and lives as I could, clearing as many levels as I could, before dying. I often have more fun in arcade games if I start over each time rather than continue. I like improving my run. When a game is this hard, it feels good to perfect the lower levels, even if I can't get near the end. Solomon's Key may become one of those games I keep pecking away at over time.

For the most part, the game handles well. However, because the B button is used for shooting fireballs, jumping is done by pressing ↑, which I dislike. The graphics are nothing special (and slightly inferior to the arcade). The same background music plays on every stage. It's not bad, but it gets tiresome.

In the end, Solomon's Key is a "your mileage may vary" game, because your enjoyment depends on whether you enjoy patiently solving reflex-based puzzles.

Linked Reviews
"Patience and practice are the keys to success, and if you enjoy putting your brain to a tough task, there's a lot of fun to be had here."
— Dave Letcavage, Nintendo Life, 7/10

"The gameplay is very challenging, as it requires creativity in thinking out a situation and planning how to address it in blocking enemies, attacking them, or moving around them."
— Pat Contri, Ultimate Nintendo: Guide to the NES Library, 3.5/5

"Despite its frequently unfair requirements, it is a pretty solid early release."
— Jeremy Parish, NES Works 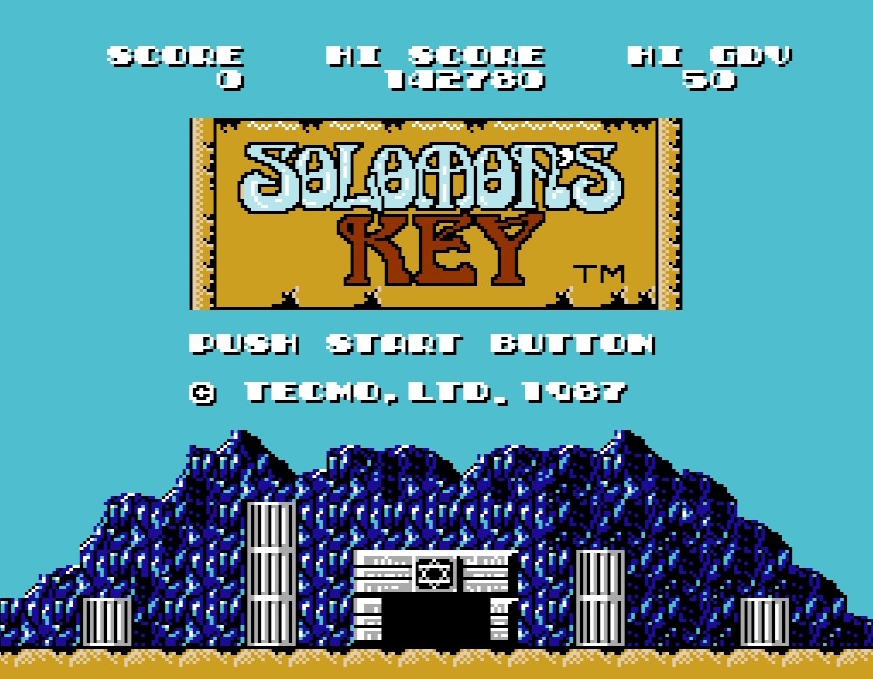