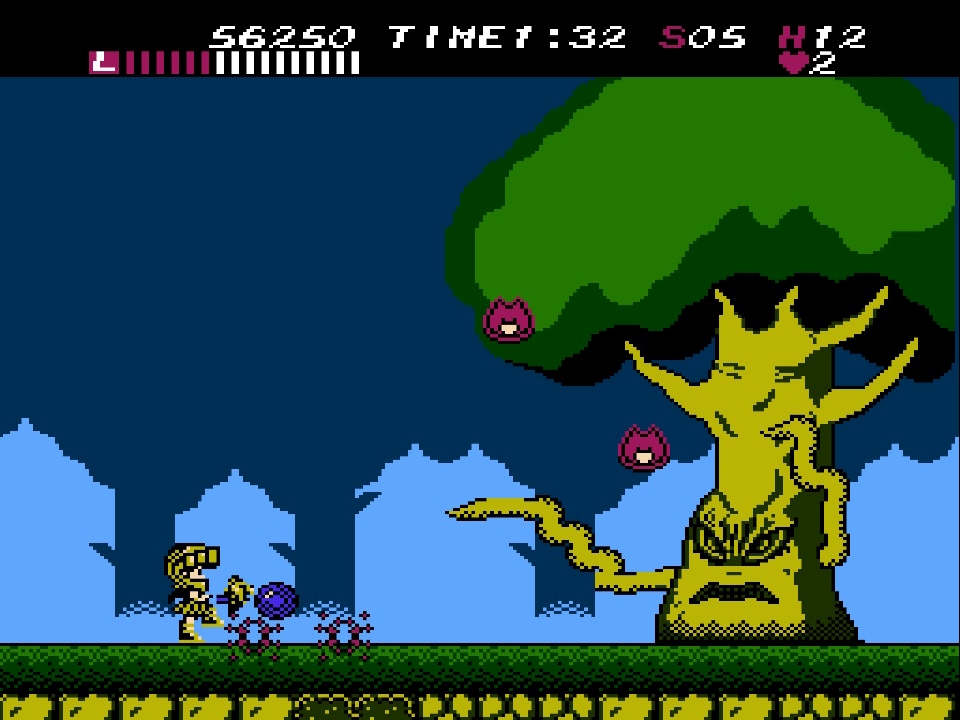 Athena on the NES is a port of the 1986 platforming arcade game of the same name, produced by SNK, a company that later became famous for its cartridge-based arcade system, the Neo Geo.

Athena can also find power-ups, such as the red ring, which increases her strength, and mirrors, which raise her defense. You have to be careful, though, because there are also some power-downs: a red hand downgrades her strength, a red shield downgrades her hit points, a broken hourglass shortens the level timer, and poison begins sapping her life.

After playing a while, I came to understand that the club, hammer, and flail are not ideal weapons. Athena is better served with the sword, bow, or magic cane. At first these cannot break blocks, which is why I avoided them, but it doesn't take long before an enemy will drop the second-tier weapon upgrade. Once powered up, these weapons can break blocks. The third sword is the strongest weapon and also shoots a projectile, making it the best weapon. There's an even stronger weapon, the flaming sword, but it's a secret item that also costs Athena a hit point whenever she swings it! 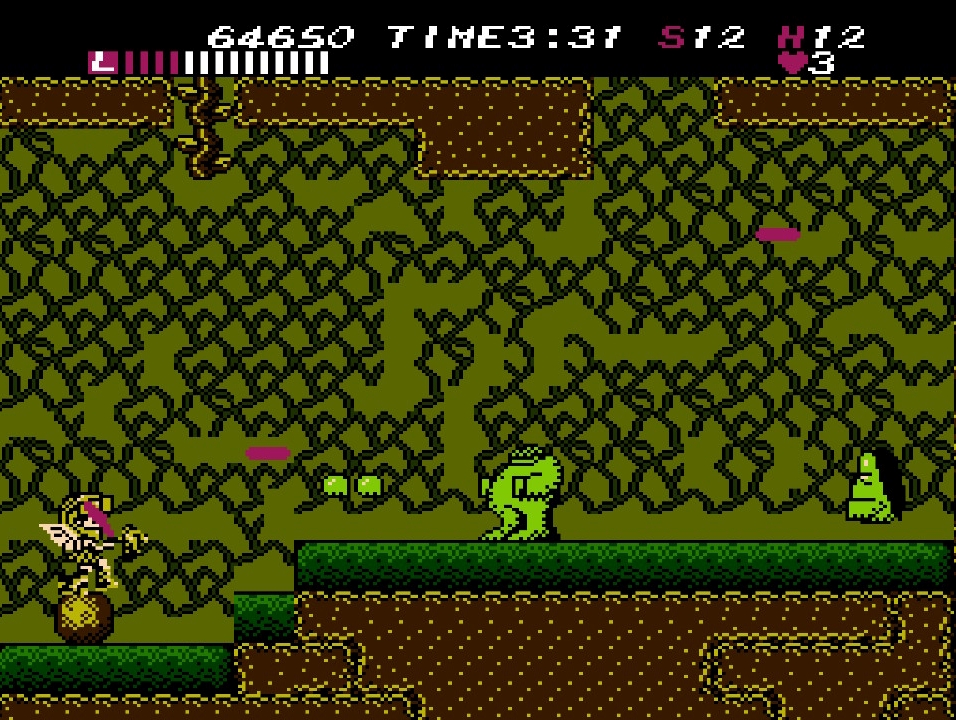 An unusual aspect of Athena is that each level contains an upper screen and a lower screen, connected by ladder-like vines. If Athena falls in a pit on the top screen, she simply falls to the bottom screen. It's a neat concept in that it gives you options for how to proceed. Besides that, though, the level designs are rather generic. Each stage has a different theme (e.g., forest, cavern, underwater). The third level I have enjoyed the most because it contains a necklace that turns Athena into a mermaid. 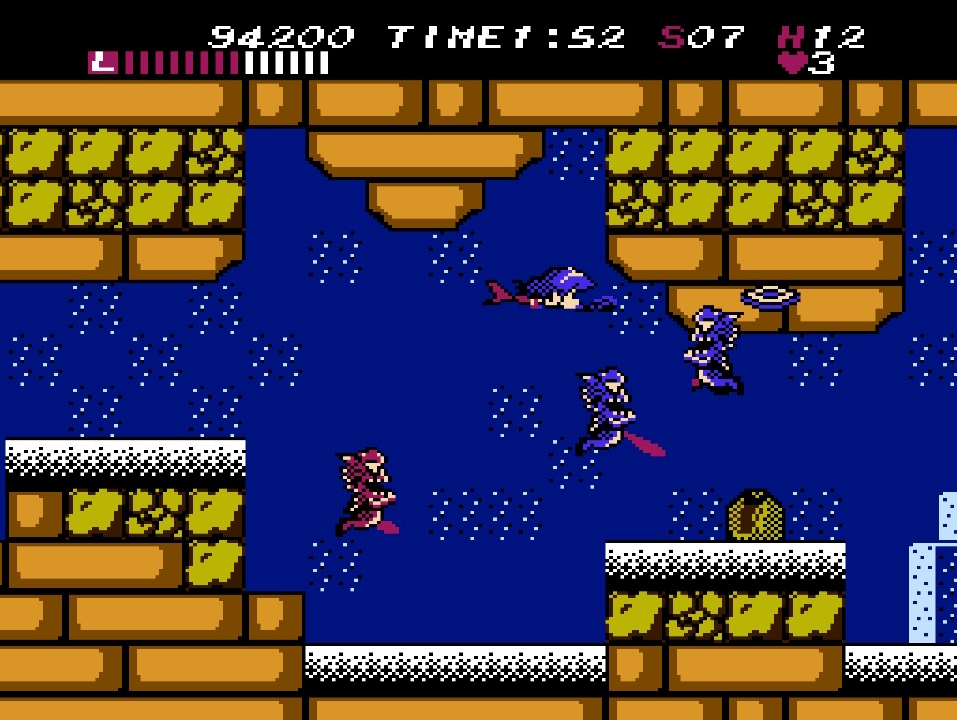 At this point I should mention that Athena is NES hard. Athena is very fragile without armor. Worse, whenever she gets hit, there is no period of invulnerability, so she can be hit repeatedly. As a result, the name of the game is acquiring weapon and armor upgrades. This is your ticket to survival. Unfortunately, when Athena dies, she has to start the level over with nothing (unless you obtain the K power-up). There are unlimited continues, though, so you can keep trying as long as you like. There are eight stages: so far I've reached the third.

Besides the high difficulty, the game has a few other drawbacks. For starters, it uses a terrible jumping mechanic, where jumps comes in cycles of three. Athena's first jump is short, then her next two jumps are huge. I can't fathom how or why anyone came up with this. In the arcade, all her jumps are short until she finds Icarus's shoes, then the cycle begins (with the second jump being a bit shorter than the third). But this still doesn't explain the system. Why don't Icarus's shoes make all her jumps big? Removing the shoes for the NES port was a good call, but it's too bad they didn't go farther and give her a consistent jump, or better yet let you control it with the strength of your button-press!

The NES version makes other changes as well, such as changing the level layouts somewhat. The most notable alteration is that enemies appear much less frequently. Presumably this was done because of hardware limitations, but it makes the game better. As hard as the NES game is, the arcade version is a nightmare, with an endless stream of enemies constantly assailing Athena as soon as you begin. On the NES, I quickly got to level three, whereas it took me almost an hour of grinding to beat the first level in the arcade. And even then I did it by skipping the boss using the magic lamp! If I had been putting quarters into a machine (instead of playing SNK 40th Anniversary Collection), it would have cost me at least $5.

Finally, the music on the NES version is bad. It barely qualifies as music, being a ten-second loop of beeps and boops. As for the graphics, they are okay by the standards of 1987. The original arcade game didn't look very impressive to begin with, and the NES dials that back further. I don't personally mind the way it looks, but that's because I'm a sucker for 8-bit.

All in all, Athena is a mediocre game that suffers from bad jumping, horrendous music, and excessive difficulty.

Linked Reviews
"This is a game that desperately wants to be liked but ends up disappointing."
— Ian Ferguson, Ultimate Nintendo: Guide to the NES Library, 1.5/5

"It's a brutally difficult game, but not in a way that makes victory feel earned, just exhausting."
— Jeremy Parish, NES Works 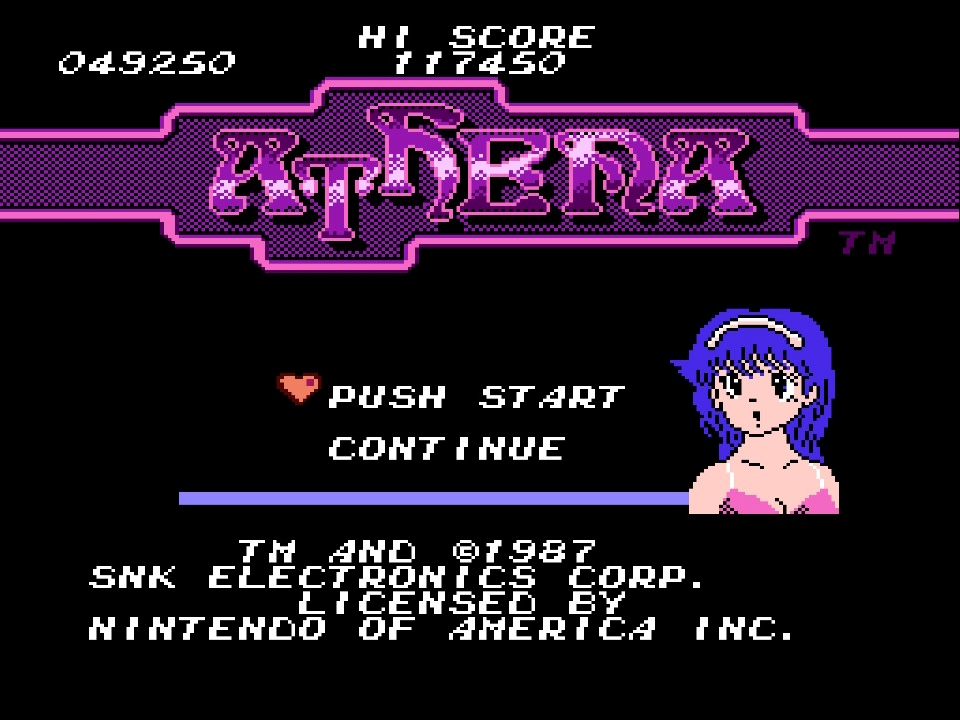