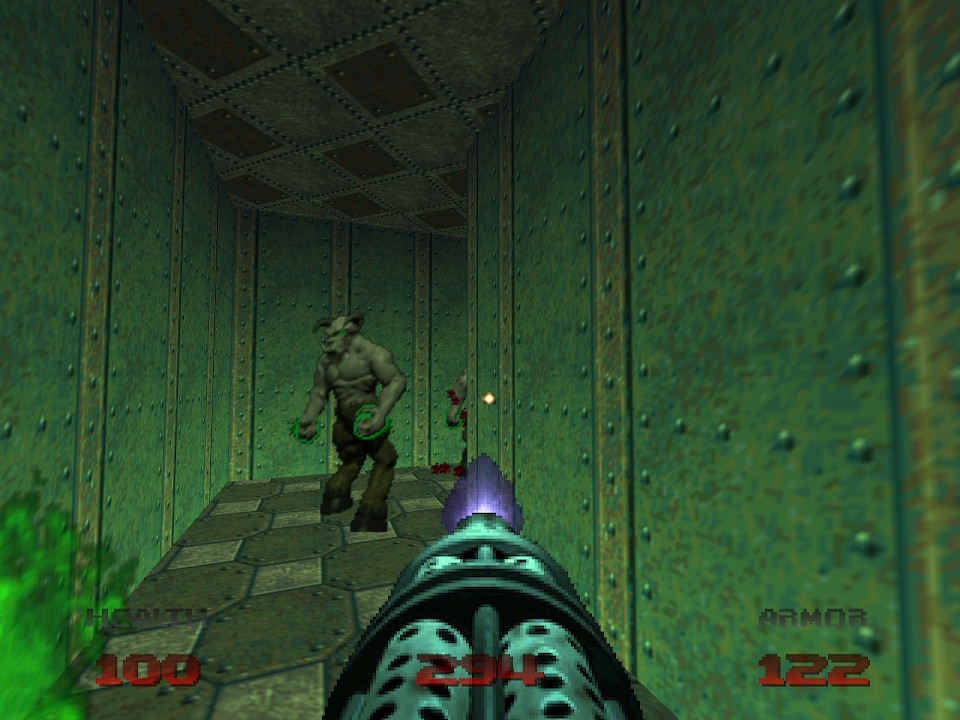 Doom 64 turns 25 years old today! It's an N64-exclusive sequel to the popular first-person shooter Doom 2. And it's easy to play today because it was re-released in 2020 across all platforms and costs only $5 to download!

The concept of Doom 64 is the same as in the original Doom: you are "Doomguy," a marine who has found himself in hell and must slay many demons to escape. Each stage (of which there are 28) is basically a maze containing a red door, yellow door, and blue door. You must find the corresponding key to open each door. To find the keys you must activate switches that open new paths. Opening doors and hitting switches usually reveals gun-toting zombies or fireball-tossing imps and demons. Even the best player is likely to take a few potshots from ambushes. Health, armor, and ammo drops help keep you alive. Quite a few secret areas may be found by pressing on random walls. For completionists, at the end of each level you are shown what percentage of the secret areas you found, items you found, and enemies you killed.

The main appeal of the Doom series (as well as the source of 90's controversy) is shooting demons to a bloody pulp. You start with a pistol, but will quickly come upon a shotgun, double-barreled shotgun, chain gun, rocket launcher, and even occasionally a futuristic "plasma" gun. My favorite is the powerful double-barreled shotgun. I avoid the rocket launcher since I often injure myself with the blast. Sometimes you find a chainsaw, with which you can chop up enemies if you're feeling dangerous and ultra-violent. There's also a power-up that puts you into "Berserk" mode, which causes your punches to make enemies explode! 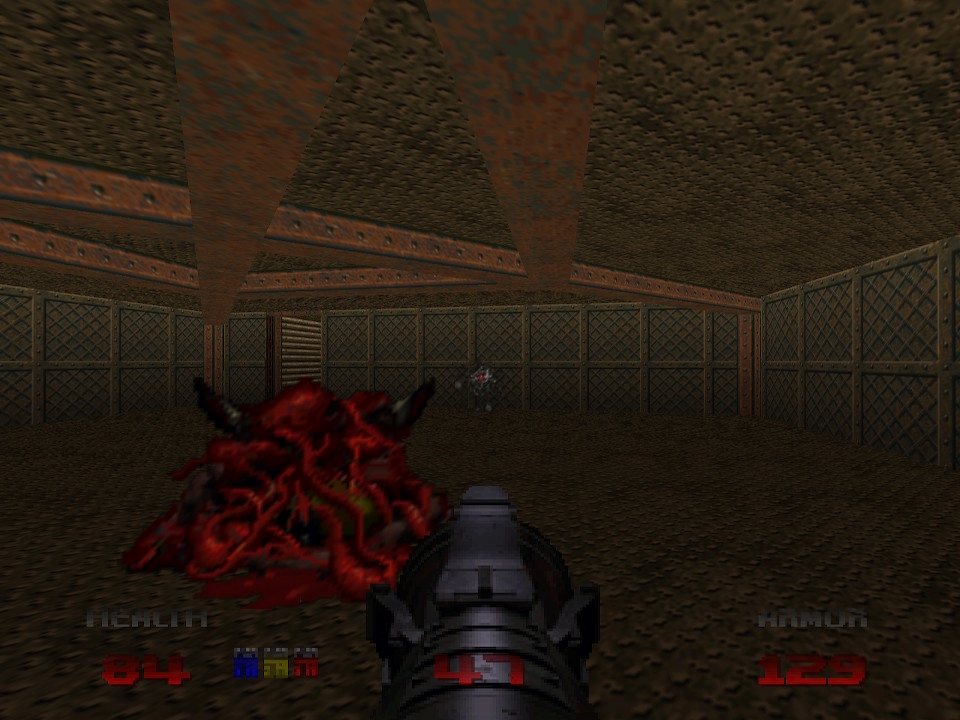 The blob of cartoony gore the monsters form on the ground is, for me, too ridiculous to be offensive. They're monsters, for crying out loud! But I suppose the Satanic imagery was always the bigger problem than the gore. Early Nintendo probably would not have allowed Doom, but after their censored version of Mortal Kombat sold worse than the Sega Genesis version, they had a change of heart!

Not having played it much as a kid, I was surprised how much of Doom is about solving a maze rather than shooting bad guys. Admittedly, I was playing on the easiest difficulty, but I spent far more time trying to figure things out than I did shooting—and the shooting was much easier. Strafing to avoid enemy fireballs is not difficult as long as you aren't outnumbered too badly. Most of the time, Doom 64 felt more like a puzzle game to me than an action game! Often I would switch to the geometric overhead map mode to find passageways I'd missed. 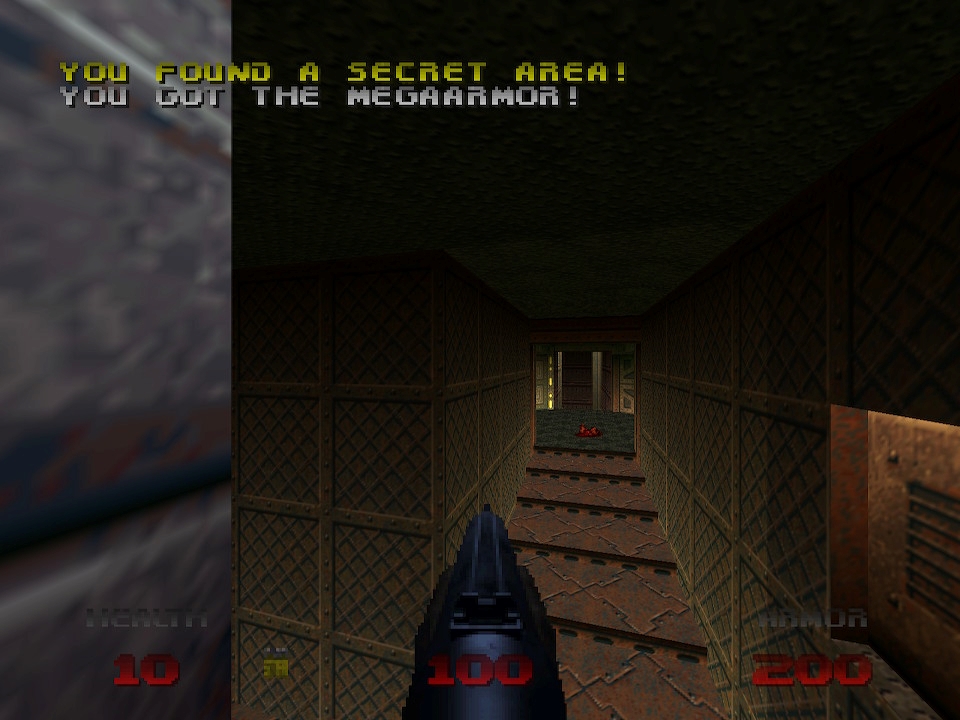 I've never been much into first-person shooters, but I mostly enjoyed Doom 64. I have two main complaints. Firstly, it makes me mildly motion sick. Reddit says to turn up the "depth of field" setting to avoid this. This is like moving Doomguy's eyes to the sides of his head, like a duck. But if you turn it up a lot, everything starts to look really distorted. Secondly, I often get lost in the levels and struggle to find a switch or door that I missed. I don't mind the game's maze-like nature, but wandering around the same areas repeatedly gets frustrating. Maybe I just suck, but it takes me more than 20 minutes to beat most levels because I get lost so much.

Doom and Doom 2 had heavy metal background music, but due to the memory limitations of N64 cartridges, Doom 64 uses atmospheric background music that really isn't "music" at all. I turned it all the way up, and all I heard was some weird sounds. It should also be said that the game's graphics do not impress, though they are fine by the standards of 1997.

I neither love nor hate Doom 64. If it weren't for the motion sickness, I'd try to finish it. But for me, I'd rather play as Mario, Samus, or Link than Doomguy.

Linked Review
"Doom works because of its simplicity, so Midway simply did more of the same with bigger levels and more guns to collect and unleash."
— Dom Reseigh-Lincoln, Nintendo Life, 8/10