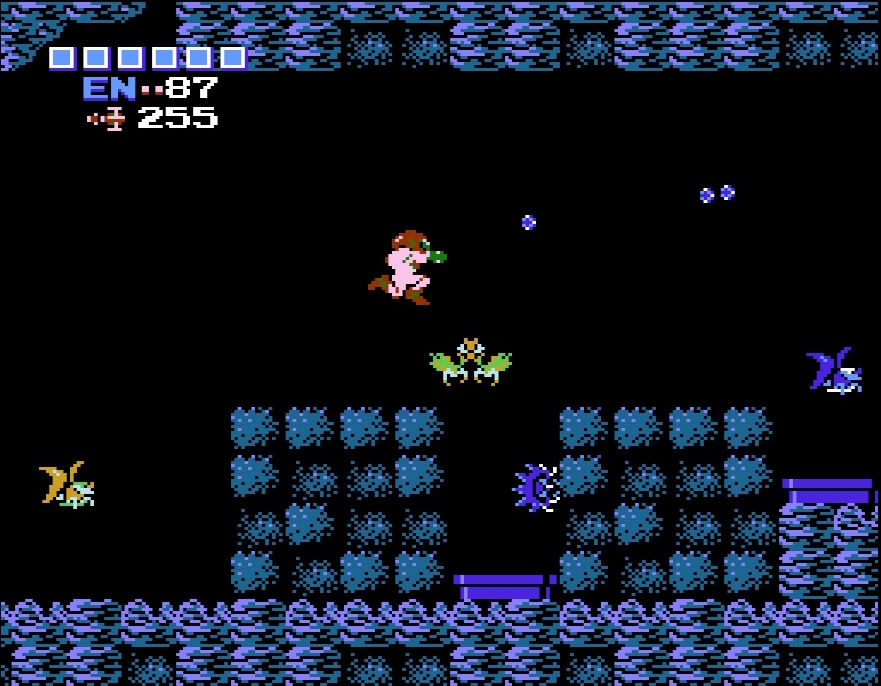 I loved Super Metroid as a child, but I never had a chance to play the original Metroid until the 3DS Virtual Console. When I finally did, I fell in love with it.

Metroid is the sister game to Kid Icarus. It uses the same combination of vertical-scrolling and horizontal-scrolling sections. You control Samus Aran, a legendary "bounty hunter" (she's only called this in the West and doesn't collect bounties) hired by the Galactic Federation to recover flying jellyfish called Metroids. These are dangerous, life-sucking creatures thought to be responsible for the destruction of the civilization of the planet SR-388. The space pirates who stole the Metroids have set up a base on the planet Zebes, where coincidentally Samus finds power-ups compatible with "his" cybernetic suit. The main power-ups are held by mysterious statues of unknown bird-people. If you beat Metroid fast enough (under five hours), Samus removes "his" helmet to reveal that she was a woman all along! Gasp. Also, if you beat it really fast (under an hour), she appears in a bikini.

Zebes is divided into five areas, each with its own color palette, enemies, and fantastic background music. Samus begins in Brinstar, and then has the option to go either to Kraid's hideout down below or to the fiery Norfair, below which is Ridley's lair. Ridley and Kraid are pirate bosses, whom Samus must defeat before she can enter the final area, Tourian. These pirates aren't too exciting or difficult: they're slow-moving damage sponges. Much more memorable is the final boss, the A.I. Mother Brain, who was the most iconic video game villain of the 80's after King Koopa. Mother Brain is also a damage sponge and sits inert in a glass tank. The fight is challenging, though, because Samus is constantly beset by circles (called Rinkas), which do a lot of damage and tend to knock her down into the lava. Unfortunately, the final fight is somewhat marred by slowdown due to the large number of sprites on screen.

Collecting cumulative power-ups is at the very heart of the game and where much of the fun lies. The designers wisely chose to start Samus next to one of the most important items. If you go to the right, you find a passage too narrow for her. But if you go to the left, you find the "Maru Mari" (aka Morph Ball), which lets Samus curl up into a ball and roll around, allowing her to pass. Soon she acquires missiles (armed and disarmed by pressing SELECT), which let her open doors that her arm cannon cannot affect. One of the most fun parts of the game is trying to collect all the hidden missiles, each of which ups her capacity by five. Even more thrilling is finding an energy tank, which gives her an additional 100 points of maximum "energy" (health). There are eight of these in the game, though she maxes out at 700 energy.

A key item is the bombs, which she can only drop while using the Morph Ball. There are many destructible walls and floors, so you spend a lot of time bombing all over the place, looking for a way forward. An equally essential pick-up is the High Jump Boots. There are three weapon upgrades: the Long Beam, which enables Ms. Aran to shoot all the way across the screen, the Wave Beam, which passes through walls, and the Ice Beam, which freezes enemies. The Wave and Ice Beams are mutually exclusive and you can't switch between them. It's better to use the Ice Beam, since you can't kill the Metroids in Tourian without freezing them first. There is a suit upgrade (called Varia) that cuts damage in half. The game gets easier once you have this. The most powerful upgrade is the Screw Attack, which allows Samus to cut through enemies just by jumping into them!

Zebes is crawling with alien beasties. The most iconic, after the Metroids themselves, is the spiky insectoid Zoomer, which moves in one direction, clinging to whatever surface it is on. Samus also needs to watch out for flying Zebs, dive-bombing Skrees, fly-like, jumping Rios, and hovering, shelled Rippers. The Rippers can be frozen and then stood upon, allowing Samus to access higher areas by jumping between them. As you move to different sections of the planet, the enemy sprites change, though their movements do not. For example, the Novas in Norfair are re-skinned Zoomers. 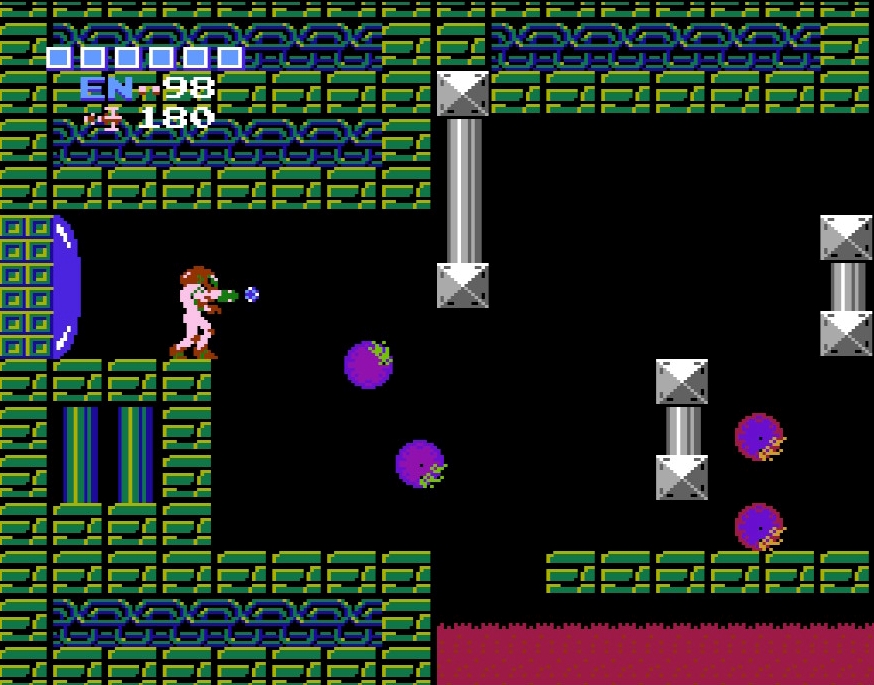 Metroid is hard, but not excessively so like so many other NES games. Whenever Samus dies, she restarts with only 30 energy, even if her maximum is 700. It's not a good design decision, but also not unusual for the time. You need to keep a close eye on her energy and grind for the purple energy drops whenever she gets low. Unfortunately (unlike Super Metroid), there are no recharge stations to refill her energy and missiles. An annoying beeping sound alerts you when she is very low on energy! A password system is used for saving your progress between sessions.

The most common complaint people have about Metroid is the lack of an in-game map (closely followed by the aforementioned lack of recharge stations). This is the game's only serious flaw. It could and should have included a map accessible by pressing START. In my opinion, the best way to circumvent this shortcoming is to enter the mental space of the late 80's and throw yourself into the open, blind exploration, the same way I recommended approaching the open world of The Legend of Zelda. Let yourself wander all over the place and enjoy the thrill of discovery! That was how the game was meant to be played. And if that doesn't work for you, just pull up a map on the internet!

The aesthetics of Metroid try to capture the vibe of the 1979 movie Alien. The space pirate Ridley is a nod to its director, Ridley Scott. At this Nintendo's designers succeeded, primarily thanks to the haunting and moody music, but also because of the closed-in, black-background level designs, which evoke a foreboding planet filled with dangerous aliens.

If nothing else, Metroid is worth playing just to experience it, even if you can't get all the way through the game. I don't agree with people who say it hasn't aged well. For me, Metroid never gets old and is an "S-tier" Nintendo classic. 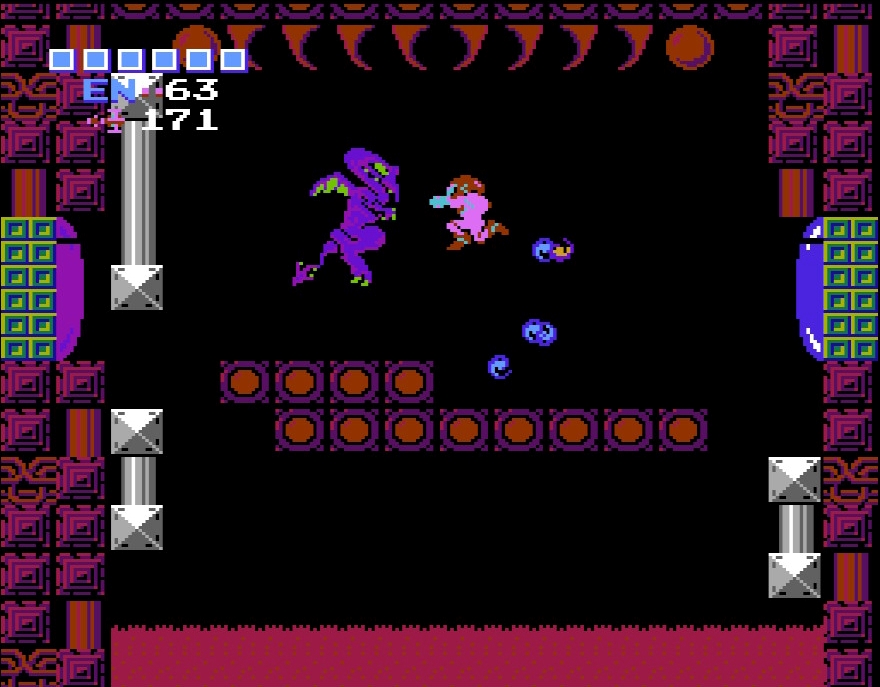 Linked Reviews
"A desolate atmosphere, innovative upgrades and a perfect soundtrack all come together to cement Metroid as one of gaming's true masterpieces."
— Philip J. Reed, Nintendo Life, 8/10

"Metroid immediately floored gamers not only with its slick presentation, interesting protagonist and open world, but from the fact that it was non-linear in nature."
— IGN, #6 of Top 100

"There is so much to love here, from strong graphics and moody music to tight controls and engaging exploration."
— Kyh Yang, Ultimate Nintendo: Guide to the NES Library, 4.5/5 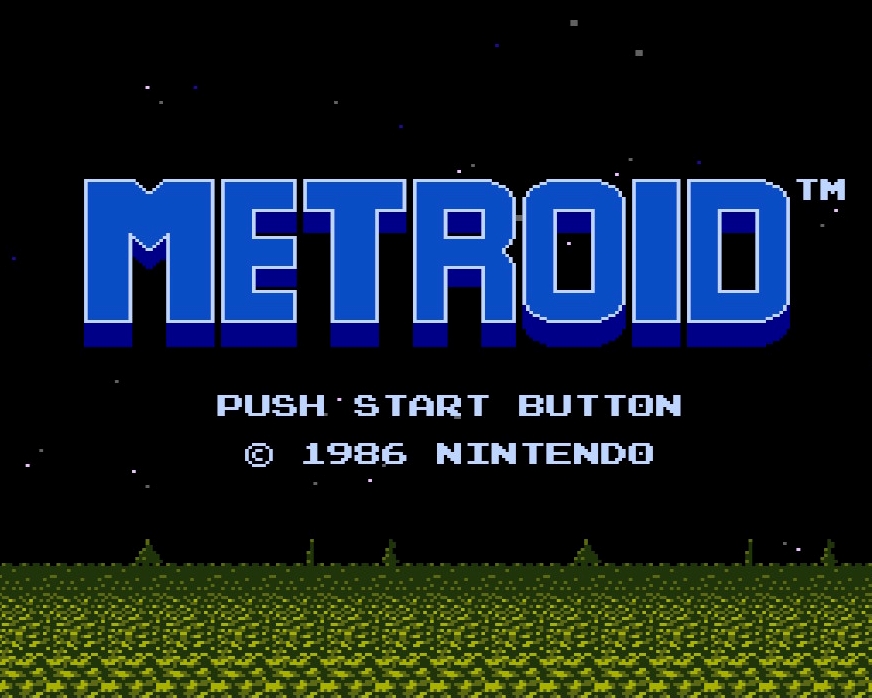