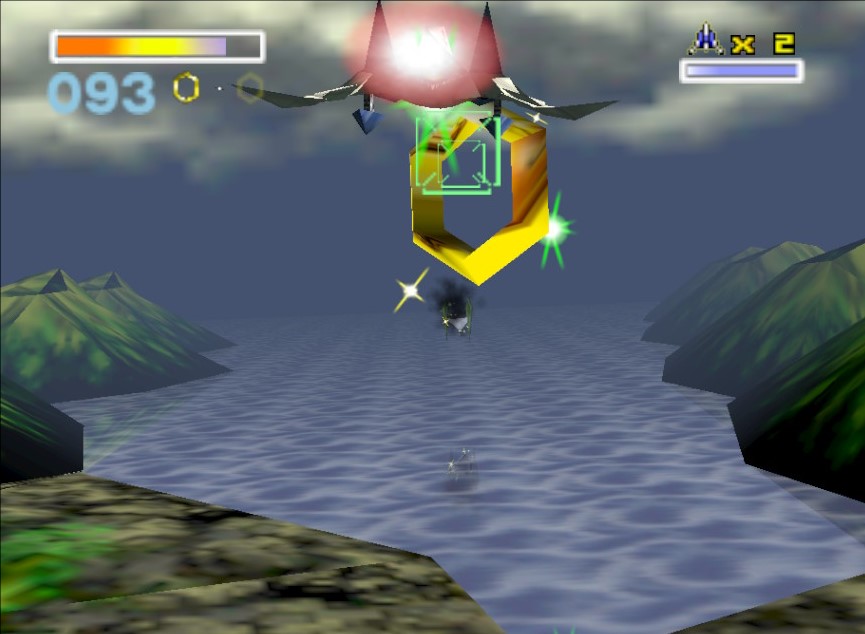 Twenty-five years ago today, Star Fox 64 was released in America. It surpassed its SNES predecessor, Star Fox, in every way.

Star Fox 64 is an on-rails shooter. "On rails" means that your ship always moves forward along a pre-determined path, like a roller coaster. Within this path you can move around on the screen using the d-pad. You can speed up briefly by holding ←C or slow down with ↓C (the N64 controller has a C button in each orthogonal direction). Speeding up uses a boost meter, which needs a few seconds to refresh before you can boost again.

The main gameplay element is shooting enemy ships with your laser (press A). Holding the button down for a second charges the laser. Charging has the added advantage of locking onto an enemy and doing splash damage to those next to it. The game records how many ships you destroy on each level and uses the total to create an arcade-style ranking, where you input your name for eternal glory (my best score so far is an unimpressive 748 hits). If you score high enough on a level, you get a medal. If you collect a medal on all seven stages, you unlock expert mode. You can retry a level after you beat it at the expense of one life, and you gain an extra life whenever you beat a level with at least 100 kills. There are no continues. 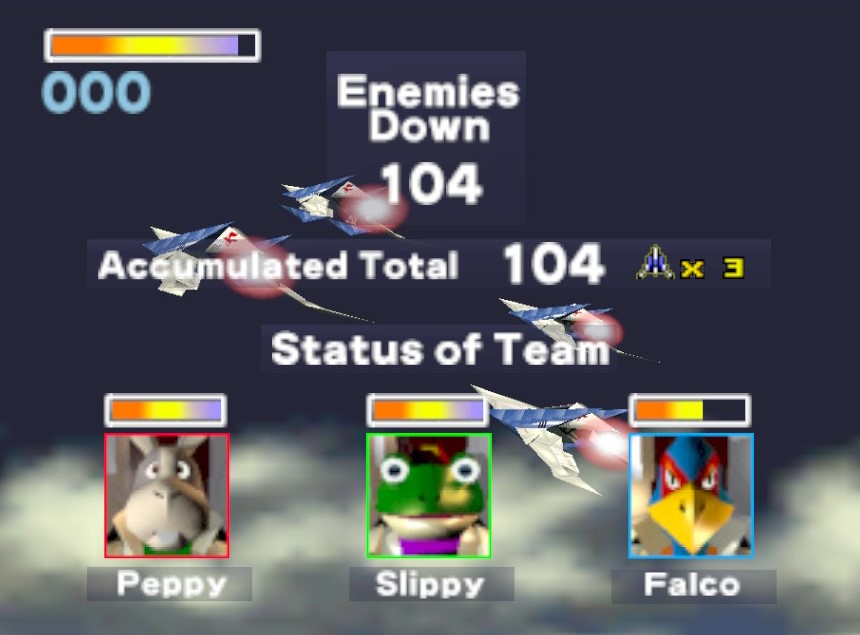 Gameplay is Star-Wars-style combat with a little bit of dodging and barrel rolling (to do a barrel roll, double-tap R or Z). You have a health meter that is reduced each time you collide with an object or are shot. You can replenish the meter some by flying into silver rings left by defeated enemies. If you collect three golden rings, the meter grows longer for the current level only. If you collect another three, you get an extra life.

There are two other power-ups. A floating B gives you a bomb. You can carry up to ten bombs at a time, and they are deployed by pushing B. The other power-up is a floating L, which turns your single laser blaster into two. Taking too much damage downgrades you back to one. Sometimes you get a message from your support team, and if you press →C, an aid package is deployed. Shoot it to release a power-up (usually a bomb).

A fun aspect of Star Fox is that you have three wingmen, Slippy (a toad), Falco (a falcon), and Peppy (a rabbit). It all feels very Star Wars, but with anthropomorphic animals (you play the titular Fox). In the SNES game they spoke only in gibberish noises, but the N64 allowed real dialogue. Often you have to resuce them from trouble (especially Slippy). If you fail to destroy their pursuers, their ships may become so damaged that they must retreat, leaving the stage. If so, they have to sit out the next one as well while their ship undergoes repairs. The wingmen are not essential to beating a stage, but they add to the fun and realism. To earn a medal, you must keep all three wingmen in the game the whole stage.

Another thing I like about the game is that it contains three branching pathways to the final stage (Venom). Most stages have a main objective. If you complete it, it says "Mission accomplished" and you move up to or stay on the harder pathway. If you finish a stage without completing the objective, it says "Mission complete" and you move down to or remain on either the intermediate or easy path. For example, on the first stage (Corneria), the mission is to find and destroy the true boss. If you fly under several archs in a row, Falco announces that he's found him and leads you through a waterfall. If you don't do this, you fail to find the true boss and face an easier one instead. When you "accomplish" a mission, you can still opt to move to the lower track instead. Two stages (Meteo and Sector X) have hidden warps to higher tracks. As a result of all this, there are 25 possible routes to Venom.

Venom holds the final boss, Andross, a giant ape head. If you approach Venom from the easy path, you will only see his first form, which is easily defeated. You shoot his eyes to distract him, then shoot his disembodied hands. The only real danger is getting sucked into his mouth. After the credits roll, Andross reappears and laughs, hinting at the fact that you need to find the hard path. The hard path means approaching Venom from Area 6. If you do this, you face a final, more difficult form of Andross after defeating the easy form. This is the game's true ending.

A few of the levels in Star Fox 64 are played in vehicles other than the standard Arwing fighter jet (the name is an obvious rip-off of the x-wings from Star Wars). Two of them (Titania and Macbeth) use a ground tank called the Landmaster. The Landmaster can hover briefly by holding ←C. There is also a submarine called the Blue-Marine that is only used on the underwater stage, Aquas. These non-Arwing levels offer some nice variety in the game. 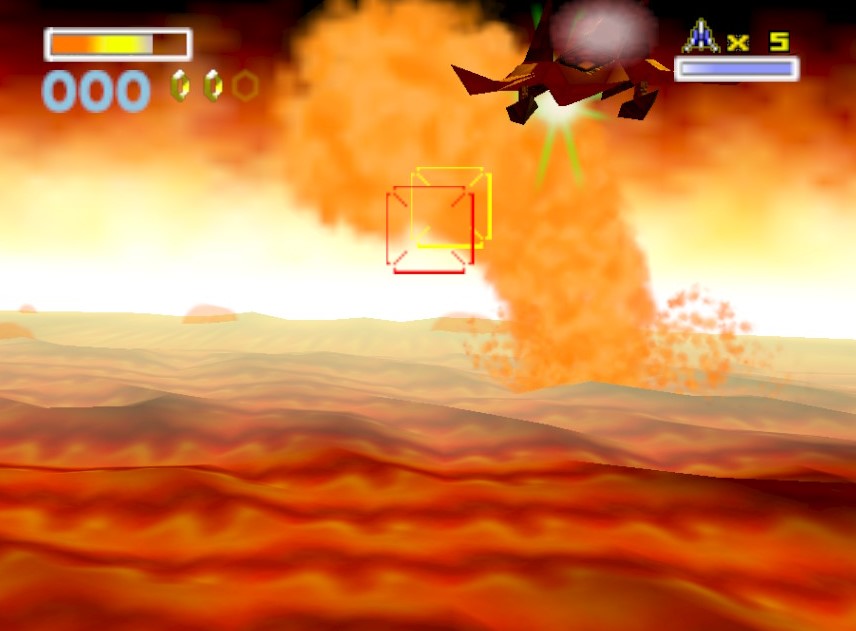 Even the standard space levels have a lot of variety. The unique feel of each level is one of the game's main strengths. I went in to Star Fox 64 assuming every level would be basically the same, just shooting enemies in space, but it doesn't feel that way. Each level ends with a boss fight, and these also vary considerably. One stage that stands out to me is Solar, in which you fly above the surface of a star. The heat drains your health meter, so you need to pick up silver and gold rings.

I went in expecting to like Star Fox 64, but as it turns out, I love it! This is one of the best video games I've ever played. I've mostly been playing the 3DS version (with Super-Stable 3D), and it's a fantastic experience. Among games I hadn't played before I began my retro-game quest, this is my favorite. I didn't own an N64 as a teenager, though some of my friends did, and I'm learning it had some excellent games. Star Fox 64 is one of its best.

Linked Review
"There's a lot of enjoyable battling as you weave about the screen, taking out enemies and avoid colliding with obstacles in Star Fox 64."
— Dave Frear, Nintendo Life, 9/10 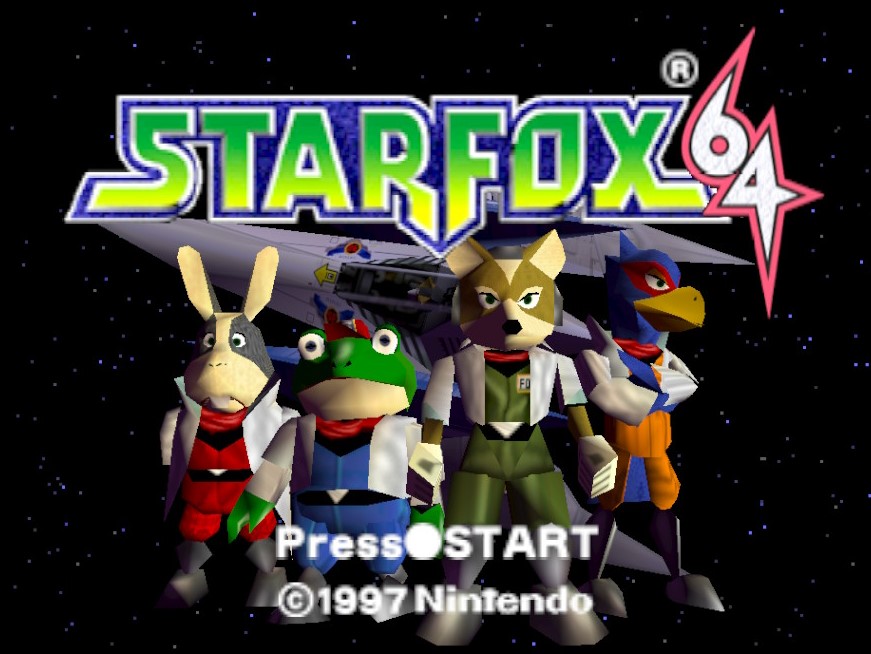