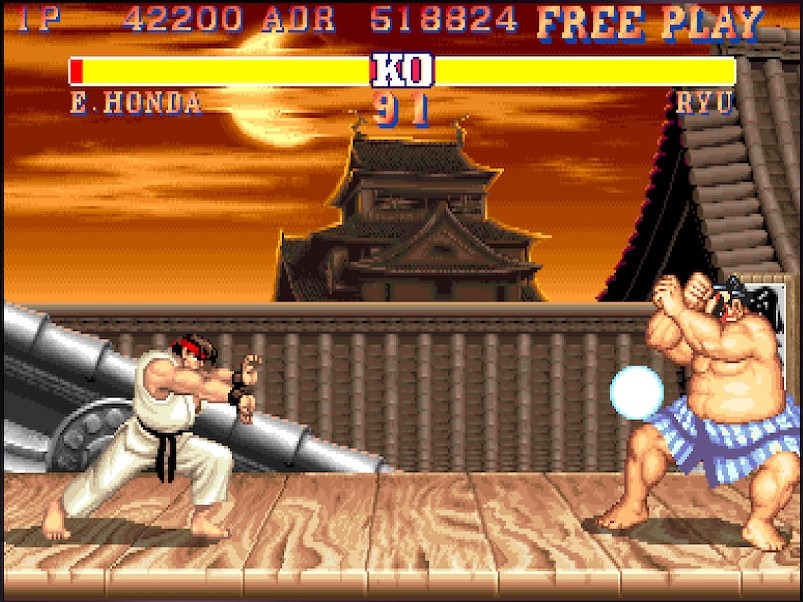 Thirty years ago today Street Fighter II made the transition from arcade to living room on the Super NES. Although quickly eclipsed by its two successors, for one year it was the hotness.

It would be hard to overstate how popular Street Fighter II was in the early 90's. Its predecessor was downright bad, but Street Fighter II invented the PVP fighting genre as we know it. Its roster of eight characters was a huge step-up from Street Fighter's two (Ken and Ryu, who returned for the sequel). The next iteration of the arcade game, Street Fighter II: Champion Edition, which hit arcades just as the SNES port arrived, let you play as the bosses as well, increasing the roster to twelve. A false rumor said a secret code would let you play them at home. While that wasn't true, there was a code (↓, R, ↑, L, Y, B) to let both players choose the same character for a mirror match. 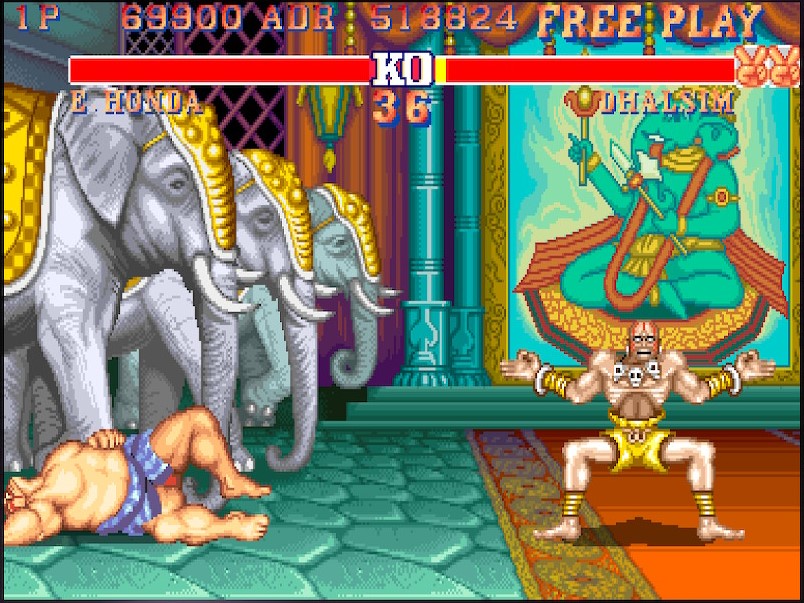 A prime strength of the game is how interesting each character is: the American airman Guile (think Top Gun); the gigantic Russian wrestler Zangief, who learned to pile-drive on Siberian polar bears; the green-skinned, raised-in-the-wild Blanka, who can electrify his skin; a sumo wrestler named E. Honda; a slight Chinese girl named Chun-Li; and the Hindu swami Dhalsim, who can stretch his arms and legs to incredible lengths and breathe fire. While the Japanese and American martial artists, Ryu and Ken, respectively, are identical except for appearance, each of the other six characters boasts a unique move set (though E. Honda's and Blanca's two moves are similar).

The best part of Street Fighter II is its well executed, responsive fighting system. Finally there was a way to beat up on your friend in a video game that didn't come down to button mashing! Skill with your chosen character actually mattered. The characters move fluidly and have robust slates of attacks. Light, medium, and heavy punches as well as kicks are perfect for the SNES's six buttons (though I find using the L button difficult since the left hand is preoccupied with the d-pad). You can also block with the d-pad by holding the direction away from your opponent. Attacks can be executed while standing, crouching, or jumping. The button you push, combined with the position of your character (for example, crouching), determines what kind of attack you perform. While some are identical except for speed and strength, several are unique, with their own particular uses. Learning all of a character's attacks and when and how to use them takes many hours of practice. Honestly, a lot of us kids were still mostly button mashing!

The most impressive thing about Street Fighter II, of course, was the special moves. Today, every gamer of a certain age knows the combination ↓,  ↘, → to perform the Hadoken. Heck, it even has its own Magic card! 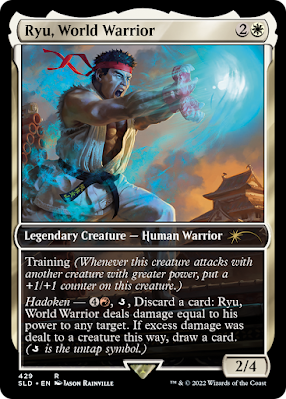 Admittedly, the range of special attacks seems limited today. Some characters have only two and seem to be at a disadvantage. Ryu and Ken can spam Hadokens and then defend with their Dragon Fist, which is a giant flying uppercut. Guile can achieve the same effect with his Sonic Boom and Flash Kick. It's hard to beat that when you're playing as, say, E. Honda. 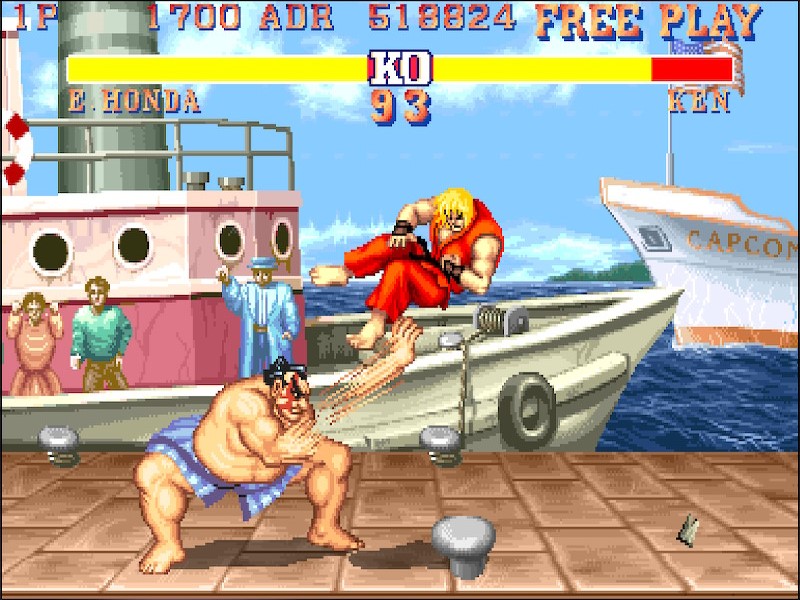 Street Fighter II on the SNES looks and sounds nearly identical to the arcade original, and plays just as well. A few compromises were made, such as removing two of the three bonus levels from the single-player mode. The sole remaining bonus stage has you trash a car in 30 seconds. The game's only weakness is that it is inferior in every way to the later Street Fighter II Turbo and Super Street Fighter II. But it was as perfect an arcade port as could have been expected in 1992, and it did exactly what it needed to: let you play the number one arcade game at home with all of the characters (except the bosses) and all their special moves. Perfect!

Linked Reviews
"While Street Fighter II still manages to entertain, captivate and enthral, it's impossible to ignore the fact that better options are on the table."
— Damien McFerran, Nintendo Life, 7/10

"Although not perfect, this fighting game is a true tour de force, with engaging characters, fantastic graphics and sound effects, smooth gameplay, great computer AI, and a well-thought-out design that is invigorating to experience."
— Pat Contri, Ultimate Nintendo: Guide to the NES Library, 4.5/5 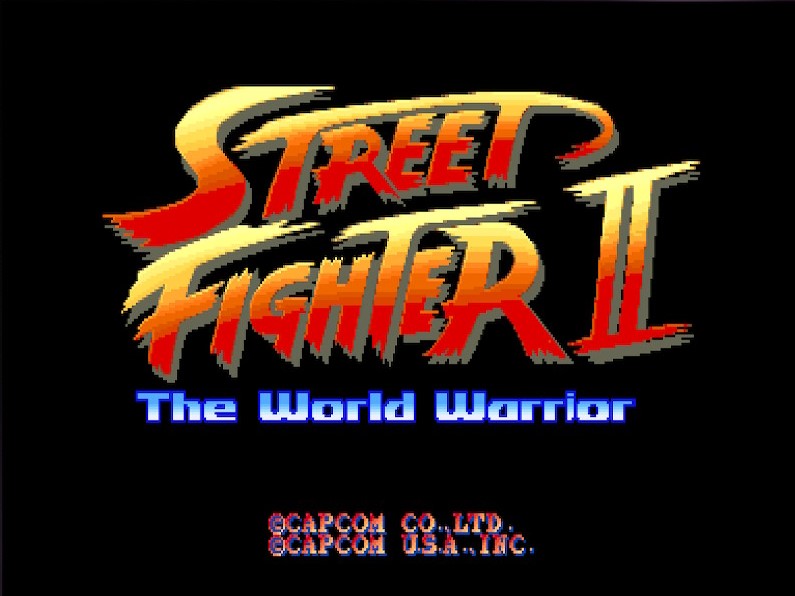