Final Fantasy is the genre-defining classic of 8-bit Japanese RPGs. It also happens to be a personal favorite of mine. My nostalgia for it is strong enough to compensate for its outdated elements.

The monsters and gameplay of Final Fantasy are taken straight from Dungeons & Dragons. You control a party of four characters, to whom you assign names and classes. The classes are Warrior [Fighter], Monk [Black Belt], Thief, Red Mage, White Mage, and Black Mage. The Red Mage is a jack of all trades and master of none: he can cast white and black magic spells, but not the most powerful ones. Unlike other mages, he can also equip swords, armor, and shields. This makes him versatile. The Monk doesn't wear armor, which makes him vulnerable to physical attacks, but he can dish out huge damage with his bare hands. The Thief can't steal anything, because there are no class-specific commands in this game besides magic. Instead, he is a weaker fighter who helps you run away from battles (though this is glitched in the NES version).

As you explore the world map from an overhead perspective, you randomly encounter wandering monsters. Combat is resolved through turn-based, menu-driven inputs. Each character can fight, cast magic (if able), run away, use any magical equipment on their person (EQUIP), or DRINK a potion. (The remakes combine EQUIP and DRINK into the Item command.) Defeating monsters gives Gil [gold] and experience points (XP). As you hit certain tiers of XP, your characters gain levels. Gaining levels increases your HP as well as their five attributes: Strength, Agility, Intelligence (which does nothing!), Vitality, and Luck.

Magic spells are not learned by leveling up, like they are in later Final Fantasy games. You must purchase them at white and black magic shops. As in D&D, each mage has a certain number of spell slots per spell level. The number of available slots per spell level increases with each character level. Whenever you sleep in an inn, all magic slots are refreshed. In the NES version, that's the only way to restore them, so magic must be conserved when exploring dungeons. 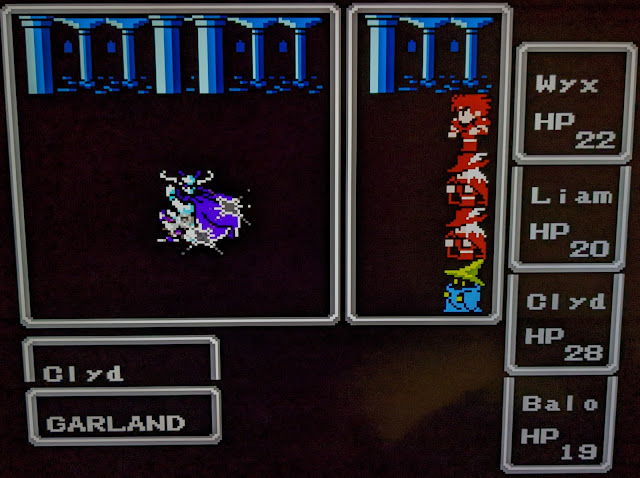 The party has been tasked by the local king with saving his daughter Sarah, who was (of course) kidnapped by a knight called Garland. As it turns out, he's a push-over. Rescuing the princess is only the prelude! Afterward, the king orders the bridge to the mainland rebuilt. As soon as you cross it, the iconic opening narrative and music play! It hits me in the feels every time. 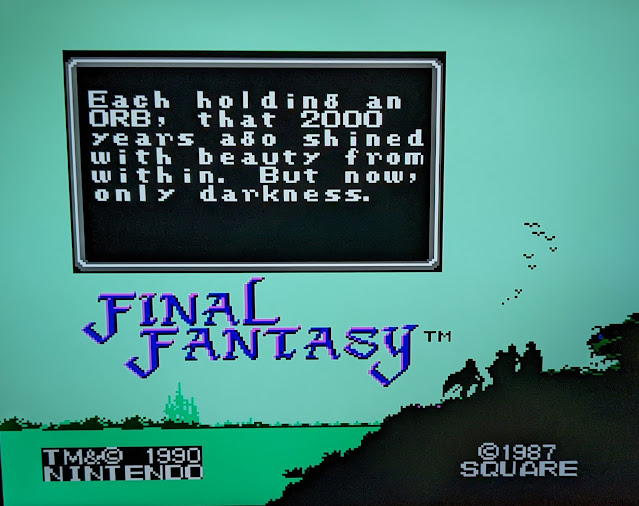 From here a nonsensical plot unfolds about the corruption of the four elements (fire, earth, wind, and water). They can be set aright by restoring light to four mysterious crystals [ORBS] in the party's possession. They must defeat the fiends of each element (Lich, Marilith [KARY], Kraken, and Tiamat). Once they've done this, they can return to Garland's keep, travel 2000 years into the past (!?), and defeat the ultimate evil, Chaos.

Mid-game it's possible to upgrade your classes by taking a rat's Tail to the dragon king, Bahamut. This is always a thrill. The Warrior becomes a Knight, who can use low-level white magic. The Monk becomes a Master (called "Super Monk" in Japan!). The Thief transforms into the fan-favorite Ninja, who in addition to being a strong fighter can use low-level black magic. The Mages all become Wizards, giving them access to their highest levels of magic, which for the White and Black Wizards includes powerful spells like Flare [NUKE] and Holy [FADE]. All the character sprites are upgraded to appear more mature.

Throughout the game the party traverses the world by boat, canoe, and finally airship! The game itself is mostly fighting monsters through menu-based combat, exploring dungeons, buying equipment and spells, speaking to townsfolk, and opening treasure chests—exactly as it should be. It's sword-and-sorcery role-playing at its purest. Whereas later Final Fantasy games focus on interesting characters involved in grandiose plots, the original is all about classes and combat.

The NES version is defined by its 8-bit audio and visuals. This is either a merit or a demerit, depending where you're standing. Unlike all the remakes, it's quite difficult. Most players either give up or grind it out, leveling their characters and farming gold. A more fun approach, which I highly recommend, is to tread carefully into each new dungeon as soon as possible, making frequent retreats to heal. It takes several attempts to clear each dungeon, but you'll get all the money and experience you need in the process.

The original NES version has many programming bugs (though most are unobtrusive). Several spells just don't work, such as Dispel [XFER]. One glitch is helpful: Healaga [HEL2] works as Healaja [HEL3] when cast in combat. The original also suffers from truncated names like GrIMP (aka Goblin Guard) and outdated, clunky design elements:

All of these little irritations were fixed in later versions.

The first Western remake was for the PlayStation, and it's very good. It gives the game a graphical overall, bringing it on par with the SNES games. The programming bugs were fixed, and a new translation was made. Menu options let you choose between original gameplay (such as the magic slot system) and a modern approach, as well as the original difficulty or a reduced one. If you have a PlayStation, this is an excellent way to enjoy FF1.

The Game Boy Advance version has several advantages, including the fact that you can play it on the go and that it has FF2 on the same cartridge! It features bonus dungeons with monsters, bosses, and equipment from later FF games. All the quality-of-life updates from the PlayStation version are turned on (whether you want them or not). The game suffers from a serious drawback, however, which is that the difficulty level is really low, even compared to easy mode on the PlayStation version. You can button-mash your way through the game.

The PlayStation Portable version is basically identical to the GBA version, only with high-definition graphics and better audio.

The Pixel Remaster version (as with FF4) is expertly made, featuring orchestral music and a gorgeous, retro pixel style. The difficulty level is toned down from the NES, but nothing like the dumbed-down, super-easy mode of the remakes. The bonus dungeons aren't included (which in my opinion is no loss). The Pixel Remaster is beyond doubt the "definitive edition."

Conclusion
Final Fantasy's main drawback is its outdated design elements. There is way too much combat relative to the meager story. There are only six classes, and they don't have unique abilities besides magic. Also, the game is rather short, taking only about twenty hours. However, all of this is easily forgiven since the game was a pioneer of the genre.

Final Fantasy's strengths are its pure, classic JRPG gameplay, iconic spells and monsters, and exquisite 8-bit music and graphics. The soundtrack by the legendary Nobuo Uematsu is among the very best. It's probably my nostalgia talking, but I think Final Fantasy is one of the best games on the NES. And the Pixel Remaster now lets you enjoy the good without most of the bad.

Linked Reviews
"Sure the game is showing its age and does feel a bit sluggish by today's more efficient RPG standards, but you still can't deny the importance and impact the game has had on the RPG genre and console gaming in general."
— Corbie Dillard, Nintendo Life, 7/10

"While not entirely innovative, Final Fantasy did make some interesting iterations on the RPG formula."
— IGN, #11 of Top 100

"Full-featured, fairly large, and worth checking out for any fan of the genre."
— Pat Contri, Ultimate Nintendo: Guide to the NES Library, 3.5/5