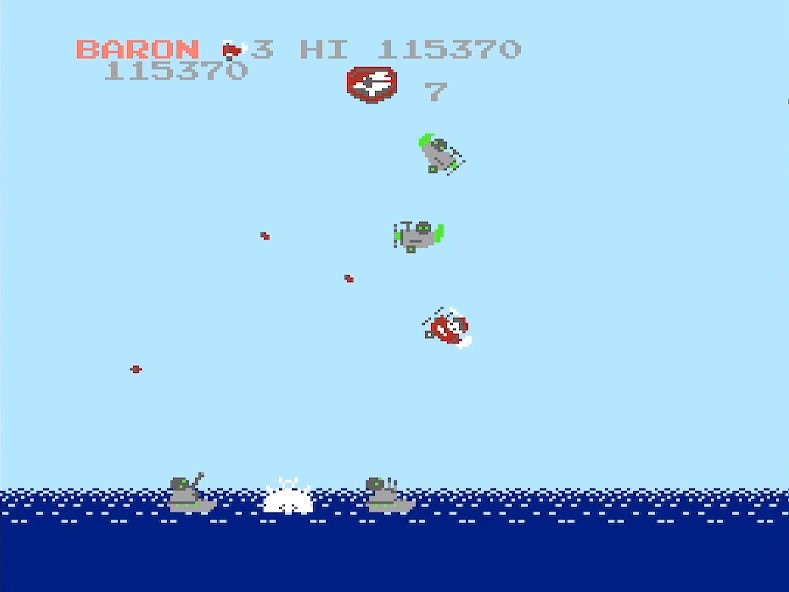 Sky Kid is a 1985 horizontal shoot-'em-up arcade game. Created by Namco, it was ported to the NES in 1987 by Sunsoft (who would soon turn the arcade game Wonder Boy into Adventure Island). The NES version faithfully reproduces the World War I dogfighting of the original.

In Sky Kid you are a World War I flying ace named Baron. A second player (Max) can join for simultaneous play—watch out for friendly fire! Sky Kid distinguishes itself from other shooters in several respects. For starters, the sreen scrolls (automatically) from left to right. When you press ↑ or ↓, your biplane pitches up or down at a 45-degree angle rather than unrealistically shifting up or down. If you fire your machine gun (press A) while changing altitude, the bullets shoot diagonally in the direction the plane is facing.

Pressing B causes the plane to do a vertical loop. This is a crucial move. While looping, the plane passes harmlessly through bullets and enemy craft. However, you still must be mindful of the ground and other objects, such as buildings and cliffsides. When looping, the plane descends a little, so if you try to do one too close to the ground, you will crash. A well timed loop is an excellent way to get the drop on the many enemy craft that come from behind. Some of them can do loops themselves, which can lead to some wild dogfighting. You can even shoot backwards or upwards while looping! Although you will loop often, be careful lest your plane end up in a vulnerable position right next to another plane or bullet. Sometimes you need to loop again immediately. Repeated looping has saved me from many a sticky situation!

Another unique feature of Sky Kid is the ability to recover from a hit. Whenever your biplane is hit, it begins a nose dive. However, if you hold ↑ and tap A before hitting the ground, you can pull out and keep flying! The next time you try to recover in the same mission, you will have to tap A more times than the previous instance. Learning to do this rapidly is an essential skill in Sky Kid: with it you can survive many hits.

There are no power-ups in Sky Kid; what you see is what you get. While this fits with the WWI theme, it can make the game seem lackluster and difficult. Like all shooters, the main challenge is avoiding enemy craft, enemy fire, and other obstacles. Not only are there copious enemy craft; there is also anti-aircraft artillery coming from the ground. Regular shots are easy to avoid, but larger shells explode into shrapnel that is expelled in the four diagonal directions.

The game is divided into stages called "missions." The NES version increases the number from 21 to 26, including three bonus missions in which you shoot at bullseyes in the sky. In each mission, there is at least one main enemy to bomb: a ship, base, or blimp. A beeping alarm plays whenever the bomb appears at the bottom of the screen. You pick up the bomb by flying into it (without hitting the ground), then hold on to it until you reach the target. Pressing A drops the bomb, which means you can't do any loops while carrying it. Only a bomb dropped in the center of the target will destroy it. At the end of each stage you need to land the plane. Fortunately this is easy, as you can just dive right into the landing strip; crashing is impossible.

Picking up, carrying, and then accurately dropping the bomb adds considerable difficulty to the game. If you don't care about a high score, the safest option is to ignore the bombs. Such an approach, however, would not be in the spirit of the game, which is all about setting a high score.

You earn bonus points by performing a loop next to certain objects. For example, if you do one in front of the Statue of Liberty, you blow up its skirt for 1000 points! Doing one in front of the sun turns it into the moon, and day becomes night! Performing a loop right above a woman on the ground causes her to release hearts for you to catch. After the mission, she embraces Baron and rewards him 1000 points for each heart. Watch out, though, because sometimes looping in front of a billboard will cause a bomb to appear instead of a bonus item!

You begin with three lives. Getting 30,000 points earns you an extra life. Another extension is rewarded at 80,000 (90,000 in the arcade version). When you run out of lives, you may continue on the same mission by holding ↙ on the second player controller while hitting START on the first! Typical 80's video-game nonsense.

The graphics and sound of Sky Kid are similar to other early Namco games, meaning not great. The NES port looks mediocre at best. Weirdly, a red pixel is always present near the top-right corner. A single music track repeats endlessly, complemented by beeping sounds.

The worst part about Sky Kid is that it's really hard. A power-up system would have helped. If you do persist past the first few missions, the stages become more interesting (and difficult). For example, in mission seven there are clouds that shoot lightning, and the enemy bases are hidden under snow. The best thing Sky Kid has going for it is its uniqueness and historical setting. Fans of World War I games may especially enjoy it.

Linked Reviews
"It's simple, repetitive, and not much to look at these days, but for old-school aficionados, score-chasers, and secret-seekers, this is something of a hidden gem."
— Morgan Sleeper, Nintendo Life, 7/10

"It starts simple but quickly ramps up, with the sky being filled by many enemy craft and fire from both air and ground units, requiring some deft movement and attacking."
— Pat Contri, Ultimate Nintendo: Guide to the NES Library, 4/5

"Sky Kid is yet another difficult game on NES. Sky Kid offers no mercy, but it is an arcade game, and that's how they rolled back then."
— Jeremy Parish, NES Works 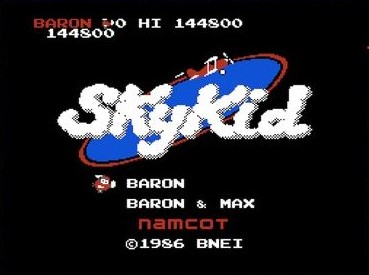