Ice Climber is oft spoken of as if it were an NES classic, but playing it today is an exercise in frustration. Which is a shame because the concept is cool.

Instead of the usual left-to-right platforming, in Ice Climber it's vertical. Each stage is a mountain of eight levels that Popo (and Nana for player two) must ascend, five of which are on screen at a time. Parts of each level are made of ice, which Nana and Popo can smash with their hammer when they jump. The premise of the game appears to be that a condor keeps stealing their eggplants and carrying them away to mountaintops. At the top of each stage/mountain lies a bonus area, where they retrieve the vegetables.

What ruins this cute game is the atrocious jumping mechanics. When jumping from standing still, Popo and Nana can move left or right only a single block, which is 1/32 of the screen. While this may be more realistic than Mario's jump, it's useless for traversing gaps. Which means you need to use running jumps instead. Unfortunately, this is only slightly better, as they still get just enough reach to traverse a gap. Press A a little too early and they fall. Despite their poor distance, they jump very high. Imagine running and somehow jumping 20 feet straight into the air but then landing just a few feet away!

Worse still, when jumping Nana and Popo actually pass through the edges of platforms! As a result, you have to wait to the last moment to push A if you don't want to whiff right through your target and fall back down. Again and again you will watch in dismay as your little ice climber plummets through platforms! A few minutes of this and you'll want to throw the controller in frustration.

While you focus on trying (and failing) to make precise jumps in which you must ignore your eyes to correct for the phantom edges, little yetis (called Topi) continually close any gaps in the ice by laying down new bricks. While this is a neat concept, on later levels it adds an additional level of frustration, as they keep filling in the gaps you're laboring so hard to create. You can smash the Topi with your hammer (press B), but they come back seconds later. Also, birds keep swooping down at you. You can bash them by jumping at them, but this, too, must be timed right or the bird hits you instead. Finally, if you're too slow (due to repeated falling, probably), a polar bear in sunglasses comes out and forces the screen to scroll up, killing Nana and Pope if they're on the bottom level.

A silver lining of the game is that you can play it with a second player simultaneously. This gives the game a small advantage compared to most other launch titles. Another plus is that you can start on whichever level you want, no password necessary. On the other hand, the background music is the same on every level (a common shortcoming in early video games).

The basic concept of Ice Climber is compelling, but it's ruined by the controls. I could see players tolerating this pre-Mario, but it launched alongside Super Mario Bros. I don't know how anyone could suffer this after have played that. Furthermore, like SMB, Ice Climber has 32 levels (which then loop endlessly arcade-style), but they are very repetitive. Each level looks identical, just with slight variations in layout and challenge.

Linked Reviews
"Ice Climber’s concept is solid and the components for a real classic are all there, but it doesn’t play very well, and no amount of clever design can change that."
— Stephen Kelly, Nintendo Life, 5/10

"While displaying some cute design and showing signs of fun, the actual play experience is shaky. Jumping horizontally is troublesome and inconsistent, as it's tough to garner distance, and this is made up for by the player being able to seemingly jump through platforms."
— Pat Contri, Ultimate Nintendo: Guide to the NES Library, 2/5

"Prior to Super Mario Bros., the fussy, uncooperative jumping controls and platforming design of Ice Climber wasn’t simply acceptable, it was about as good as it got. But once Mario journeyed to the Mushroom Kingdom, things would change forever. That leaves poor Ice Climber stranded as a bit of a relic."
— Jeremy Parish, NES Works

"Ice Climber's biggest claim to fame for its time was the ability for two players to play the game simultaneously."
— IGN, #79 of Top 100 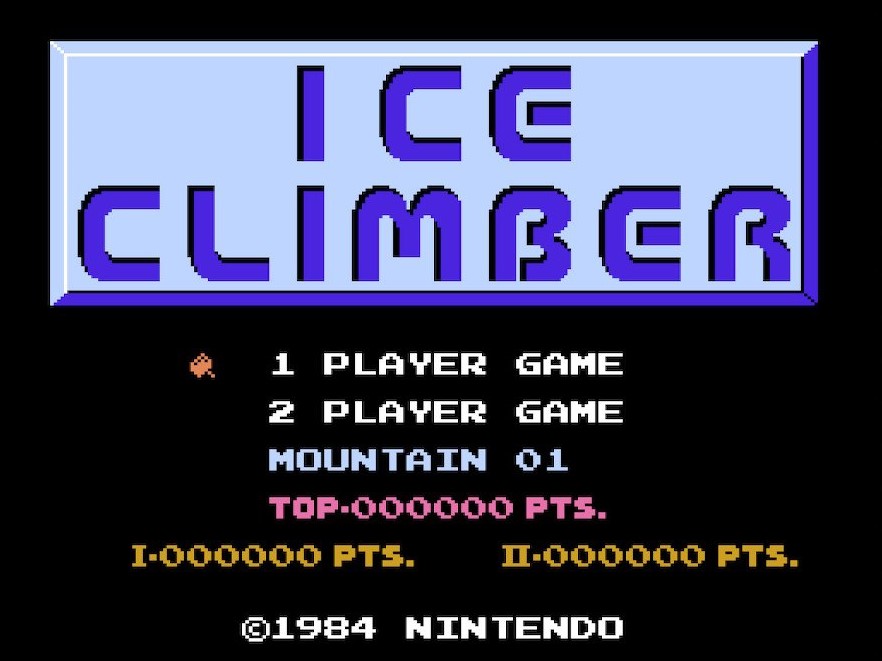