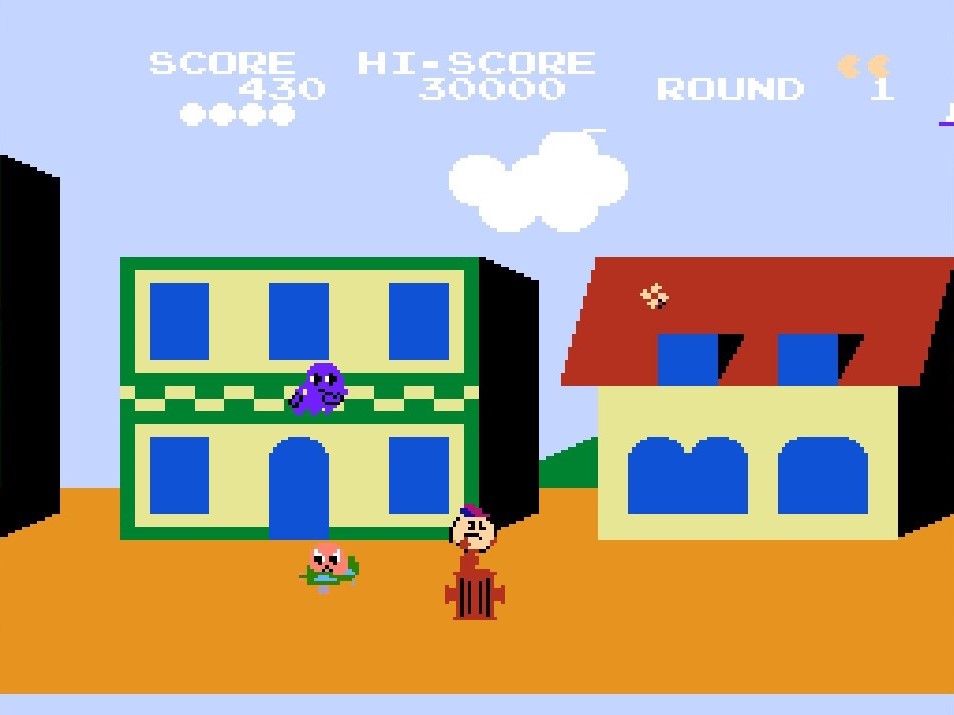 Namco made a wise decision when they passed over Pac-Land in favor of its 1980 predecessor Pac-Man for the NES.

I expect Pac-Land attracted a fair amount of attention when it appeared in arcades in 1984. Not only did it feature one of the most popular video-game characters ever, but it introduced an entirely-new and exciting style of gameplay: side-scrolling platforming! Instead of navigating the same maze endlessly while gobbling up pellets, Pac-Man now has arms, legs, and a jaunty little hat! His new, anthropomorphic form was based on the Saturday morning cartoon. The ghosts, Inky, Blinky, Pinky, and Clyde, are still around, only now they employ cars, pogo sticks, airplanes, helicopters, and flying saucers in their quest to capture our yellow protagonist. Sue (from Ms. Pac-Man) slowly pursues Pac-Man, acting as a kind of timer.

Gameplay is straightforward: Pac-Man runs and jumps over obstacles and ditches, while avoiding ghosts and grabbing fruit for bonus points. The occasional Power Pellet still lets Pac-Man eat the ghosts, but he can also pick up a protective hat, which lets him absorb mini-ghosts dropped by ghosts in helicopters. Unfortunately, obtaining the hat requires pushing on random obstacles like tree stumps and fire hydrants. An interesting gimmick is that, after the third "round" (level) of each of the eight "trips" (worlds), Pac-Man returns a fairy to its home, and then has to go backwards through an approximation of the previous stages. At this point, the game fails to communicate that the fairy has given Pac-Man magic boots that let him jump in mid-air. At the beginning of 1-4, I found myself staring at a giant ditch, unsure what to do. I jumped into it and promptly earned a Game Over! Nice. 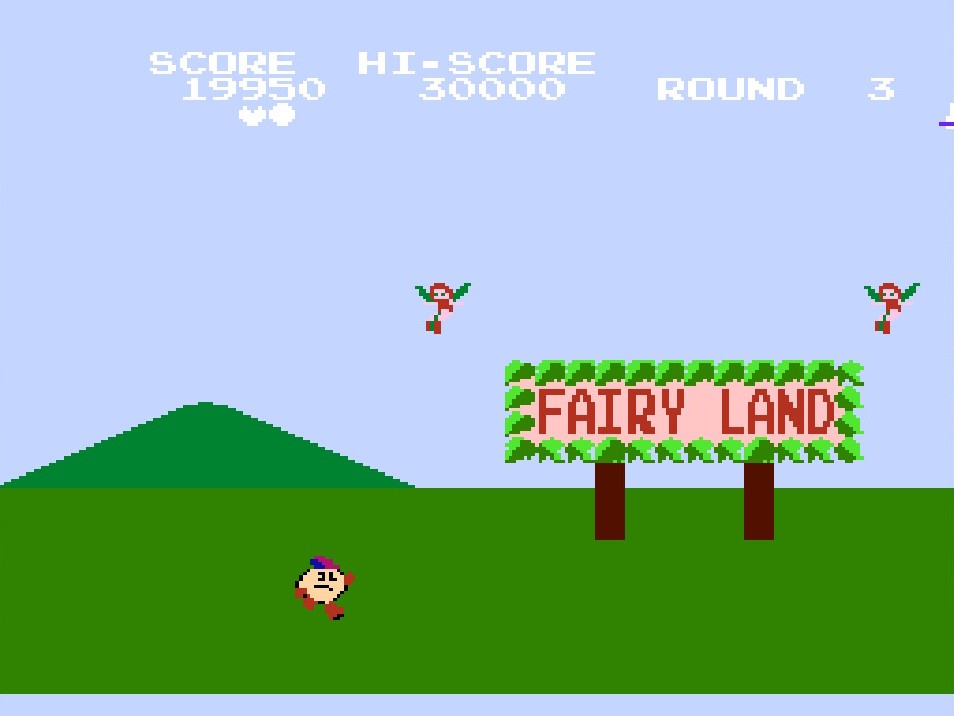 While this sounds like a decent game (and in 1984 arcades, I'm sure it was), the platforming is uninspired and repetitive and the controls slippery. It also uses a weird control scheme, where the directional pad jumps, B moves Pac-Man left, and A moves him right! To run, you have to double-tap a direction. After I died in the aforementioned ditch, I felt no desire to continue playing. This is one of those games that was probably great, until Super Mario Bros. came out and made it look ancient. 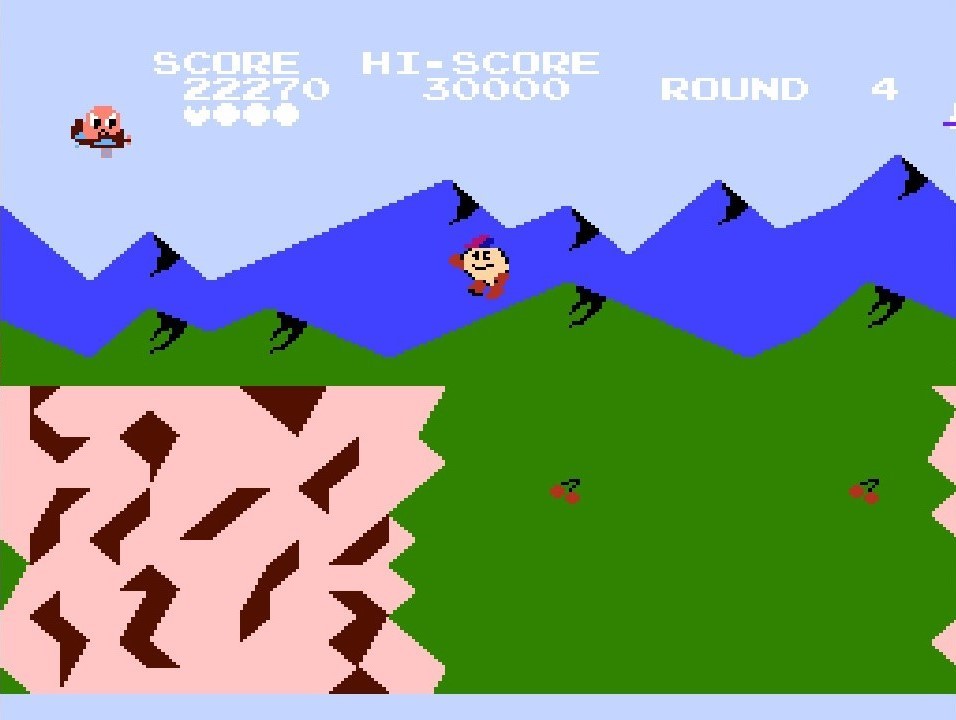 I've never seen Pac-Land in an arcade, but watching video of it, I was struck by how much better it looks than the Famicom port! The sprites and backgrounds are larger and more detailed. Forest levels have foreground effects that obscure Pac-Man and the ghosts. It seems a number of compromises were made to get this game onto the Famicom's 8-bit hardware. I would like to try the arcade version, which was included in Pac-Man Museum for the PS3 and Xbox 360 (an announced Wii U version was sadly canceled). I wouldn't be surprised if the original Pac-Land makes its way to Switch eventually.

Pac-Land deserves credit for pioneering the side-scrolling platformer genre, but it's mostly a museum piece today. 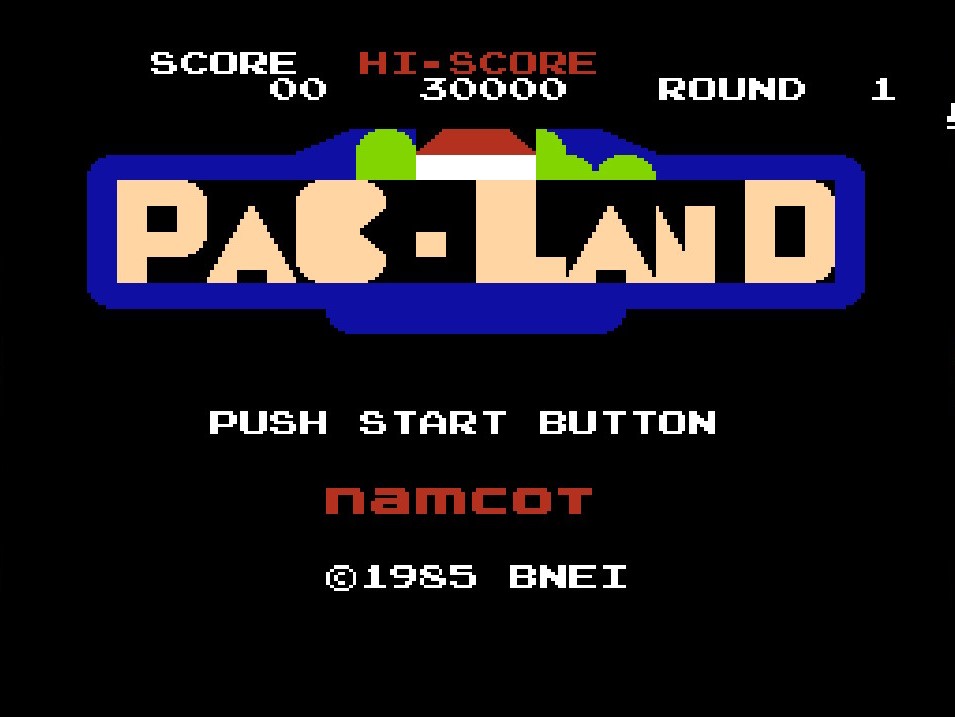