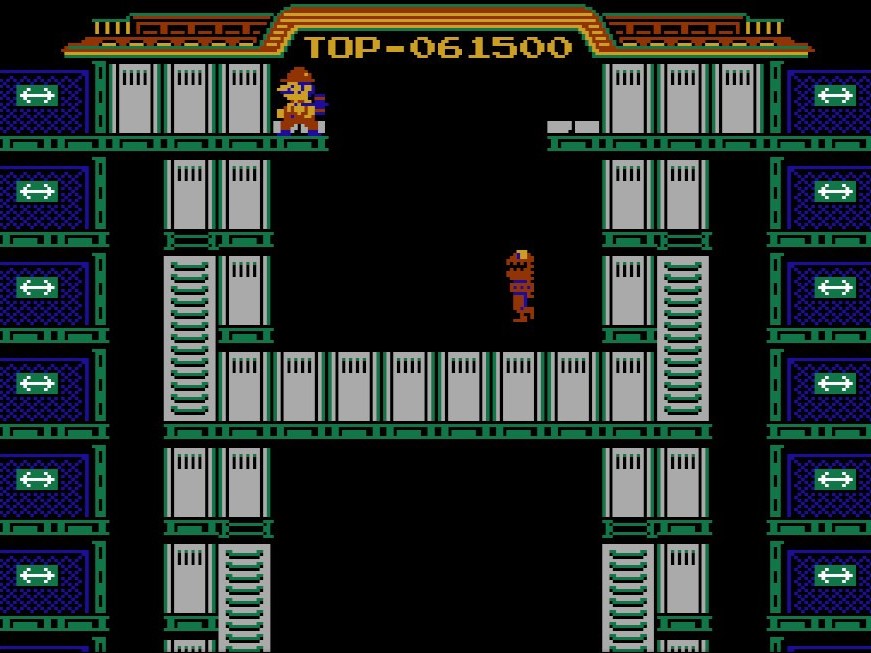 I remember seeing pictures of Wrecking Crew as a child and finding it hard to believe there was this janky-looking Mario game that my friends and I had never seen. Now that I've played it, it's still hard to believe.
Wrecking Crew reminds me of Clu-Clu Land in that it's kind of irritating but can suck you in, if you play it long enough. It's addictive, not because it's especially fun, but because you always want to solve the next stage. The game it most reminds me of is The Adventures of Lolo, except that game is cute and this game is, well, not.
The goal of each stage is to smash all the breakable walls. They are in the background, so breaking them doesn't open any paths. Sometimes you have to destroy ladder-like walls, too. This is where the puzzle elements come in, because Mario may need some of those wall-ladders to move up or down platforms. Levels generally have to be solved from top to bottom since if Mario falls, he may not be able to climb back up.
Some stages have bombs, which, when hit, can cause a chain reaction of destruction. They also destroy certain platforms holding empty drums. With careful timing, you can trap an enemy inside a falling drum. Exploding these platforms can open up new pathways or even block Mario's path, forcing a Game Over and restart (push SELECT).
On many stages a foreman named Spike follows Mario around, trying to disrupt his work. He may destroy ladders you need, for example. If he smashes a wall while Mario is by it, Mario falls down to the platform below him. As a result, the game is often a race against Spike.
After the ugly gray-brown visuals, my second least favorite part of Wrecking Crew is the enemies (especially Eggplant Man--what is it with early Nintendo and eggplants?). They zip around following a homing pattern. Mario must constantly avoid them. As the levels get harder, figuring out patterns for avoiding the enemies becomes increasingly important and difficult. It doesn't help that you're constantly avoiding fireballs as well a la Mario Bros. Unlike in that game Mario can't jump, so if there's an enemy on both sides of him, he's doomed.
After a few hours, I was able to complete the first 25 levels. Wrecking Crew has an impressive 100, and you can choose any level you like, no password necessary. They get a little repetitive, but their puzzling nature distinguishes one from another (unlike, say, Ice Climber). Each stage feels like a fresh challenge. As a result, Wrecking Crew can become addictive.
Different people enjoy different games. While I find Wrecking Crew tedious and frustrating, I can imagine other people loving it. With 100 unique levels on offer, they won't be wanting for fun. In addition, the game lets you design your own levels. The level-editor is intuitive and gives you total freedom. Too bad you can't save them! I've learned from Jeremy Parish's NES Works that in Japan you could save your levels in both this game and Excitebike by purchasing a tape recorder peripheral. Although the NES has an expansion port on the bottom, nothing was ever released for it.
Wrecking Crew doesn't excel in the audio-visual department. As noted, the graphics look drab. A single background track plays continuously. It may not be my cup of tea, but Wrecking Crew isn't bad. With 100 levels, a robust level editor, and plenty of challenge for action-puzzle lovers, it's a solid launch title.
This wraps up my series on launch titles. I have never seen, let alone owned, the gimmicky Robot Operating Buddy needed to play Gyromite and Stack-Up. 10-Yard Fight and Kung Fu have never been re-released. They were the only launch titles made by third parties. Next I'll play some early Famicom games that never came to the NES.
Linked Reviews
"Wrecking Crew is an ambitious game, and even in the face of the occasional exhausting aggravation, this puzzle-platformer has a lot to offer."
— Stephen Kelly, Nintendo Life, 6/10
"A simple game, this title has enough unique puzzle action to keep things interesting, at least for a short while."
— Pat Contri, Ultimate Nintendo: Guide to the NES Library, 3/5
"Bask in the weirdness of Wrecking Crew, and enjoy what amounts to a pretty good puzzle-platformer."
— Jeremy Parish, NES Works 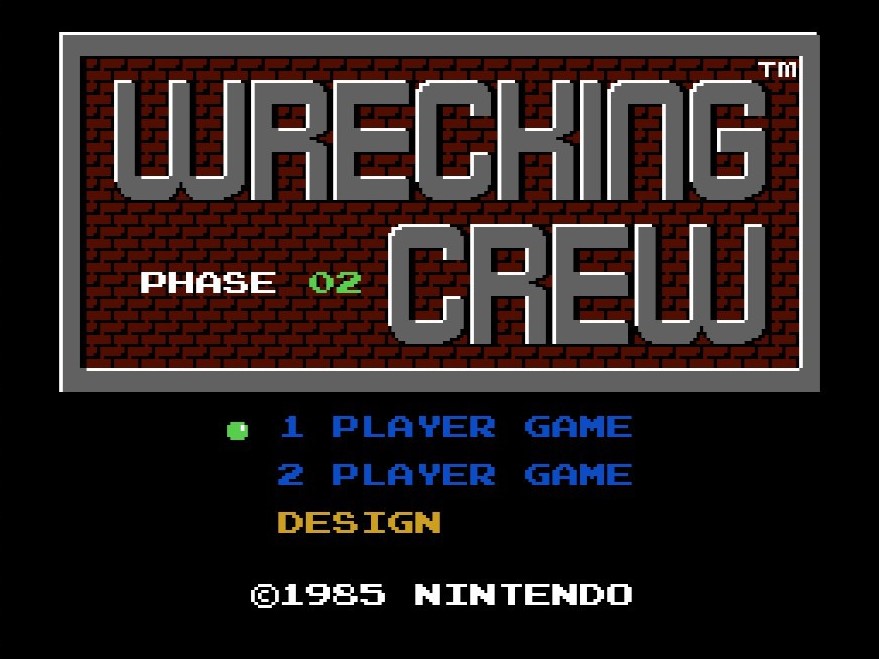