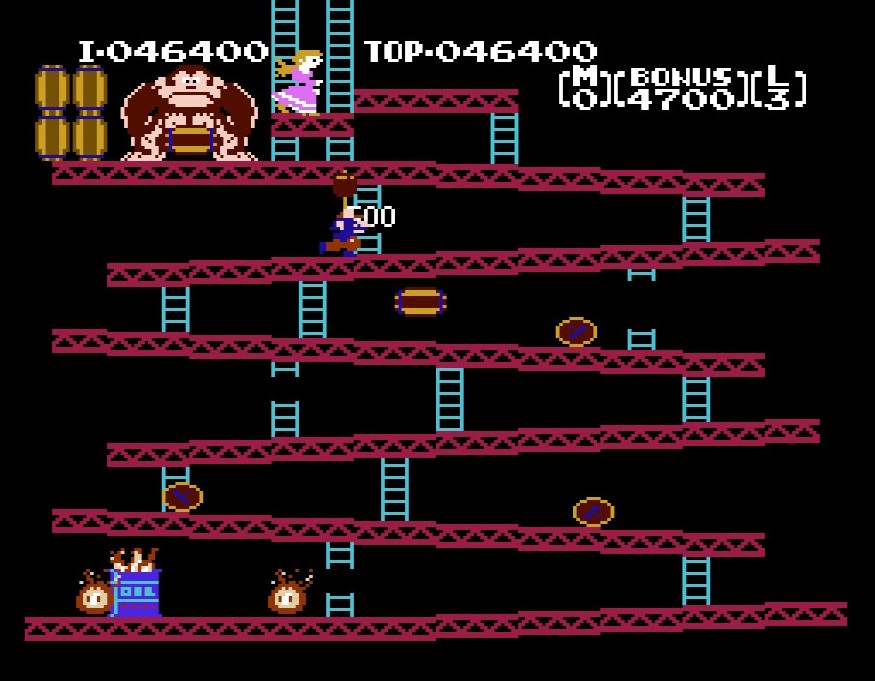 Like Space Invaders and Pac-Man before it, Donkey Kong was an incredible success when it hit arcades in 1981. It made Nintendo hundreds of millions of dollars and put them on the video game map. It is the reason Nintendo began working on a home console, with the express purpose that it be able to "play a mean game of Donkey Kong." Ironically, the game was created due to a failure: Nintendo of America had thousands of unsold Radar Scope cabinets, and they asked Japan for a new game that could be put into them. Thus was born Donkey Kong, the first game ever designed by the legendary Shigeru Miyamoto.

In Donkey Kong — whose bizarre name supposedly results from Miyamoto having looked up the Japanese words for "stubborn" and "ape" in a Japanese-English dictionary — you control a carpenter named Jumpman. During the American release, Nintendo began calling him Mario, the name of their Seattle landlord, Mario Segale. Mario's girlfriend, Pauline, has been kidnapped by a gorilla, who carries her up a building. The concept was so obviously influenced by King Kong that litigious Universal Studies sued Nintendo, but they lost because King Kong was in the public domain. In fact, it was proved that they knew they didn't own it, despite their claim, so the judge ordered them to pay Nintendo $1.8 million in restitution (Steven L. Kent, Ultimate History of Video Games [2001], 218).

Donkey Kong throws barrels, which Mario must jump over or smash with a hammer. He moves up girders by climbing ladders. When he gets to the top, DK grabs Pauline and carries her up to another stage. A second stage? This was a revelation in 1981, when other great games (e.g., Space Invaders, Pac-Man, and Galaxian) were a single screen that repeats endlessly. On the second stage, Mario has to remove rivets from girders while avoiding anthropomorphic Fireballs. When the last one is removed, Donkey Kong falls to his ruin, and the two lovers are re-united. 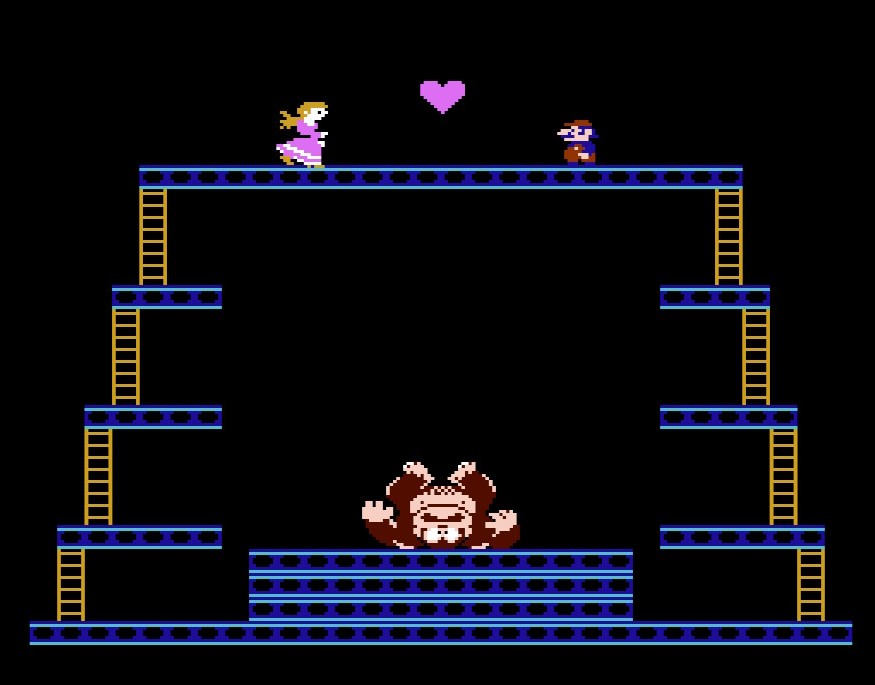 Then, the game appears to loop (on a harder setting), but if you beat the barrel level again, you are treated to another new level! Now Mario rides elevators up and down, while avoiding more Fireballs and a bouncing spring. If you surmount this challenge, you take a second crack at the rivet stage, then it's back to the first stage, and then—miracle of miracles—a fourth (and final) unique stage appears! Mario is in a cement factory, in which "pies" of cement are carried along a conveyor belt that keeps reversing directions.

Donkey Kong was the genesis of a new genre of video games: the platformer. The hero must jump around various "platforms" whilst avoiding or destroying enemies, with a specific endpoint to reach. There are items to collect for bonus points, in this case Pauline's hat, parasol, and bag. Completing the level quickly also earns points. This is still an arcade game, though, so the goal isn't to beat Donkey Kong (you'll do that repeatedly, if you're good), but to rack up the highest score you can before you lose your third life. The current world record of 1,272,700 was set by John McCurdy just last week!

Visually, the NES version of Donkey Kong is very faithful to the arcade original. It blew away the Atari VCS and Intellivision ports Nintendo had licensed out, which resembled stick-figure interpretations and only had the first two stages. On the NES, the sprites look great, surpassing even the excellent ColecoVision port. As with all early arcade ports, the levels had to be squished to fit the 4:3 aspect ratio of televisions. Nevertheless, it looks completely natural, as though it had been originally designed that way. It also added two difficulty options, which is good because the arcade version is quite tough.

Unfortunately, the 16 kilobyte size-limitation of Famicom cartridges in 1983 did require some compromises. The intro scene with Donkey Kong taking Pauline up the ladders was removed, as was the "How high can you go?" screen. Pauline's hat became lost forever, leaving only her parasol and bag for Mario to collect. Most significantly, the cement factory level was left out entirely (as in the ColecoVision version). This is not as big a deal as it might seem, as it's the least fun level and one few American players ever encountered. Although only the second level in the Japanese version, the bizarre level pattern employed in American DK machines meant you had to beat six screens before you saw it, and then it appears least frequently after that.

By the time Donkey Kong hit the NES in 1986, it was five years old—ancient by video game standards. By then, arcades were full of many quality games of much greater complexity, such as Bubble Bobble, which has 100 unique levels. Nintendo knew the game was antiquated, so they put "The Original!" and "Arcade Classics Series" on the box and cartridge! Honestly, though, its age was not a problem. The game is still fun in 2021, let alone 1986, and sold a million copies. Since most video games were of unknown and often dubious quality, people were happy to pick up the known hit Donkey Kong for their new "Entertainment System."

Donkey Kong is a classic. Admittedly, some aspects of it are dated, such as how Mario dies if he jumps down too far. The controls are a bit stiff, and the background music is just a repetitious thumping.

In retrospect, one wishes Nintendo had created a fresh port for the NES. Its initial cartridges could hold up to 40 KB of data, more than enough to include the cement factory and Pauline's hat. Programming a new game, however, would have required resources, and it's highly unlikely a complete port of Donkey Kong in 1986 would have sold enough additional units to recoup the added cost.

Fortunately, Nintendo is a company that knows the value of its back catalogue. In 1999, they made a completely-faithful arcade port (albeit in 4:3 aspect ratio) as a bonus game in Donkey Kong 64! In 2010, the Wii briefly got an "Original Edition" expansion of the NES version that just added in the cement factory stage. In 2018, for the first time ever, the original arcade version was ported to the Switch. This may be the definitive way to play the game, but the NES version remains a classic in its own right. 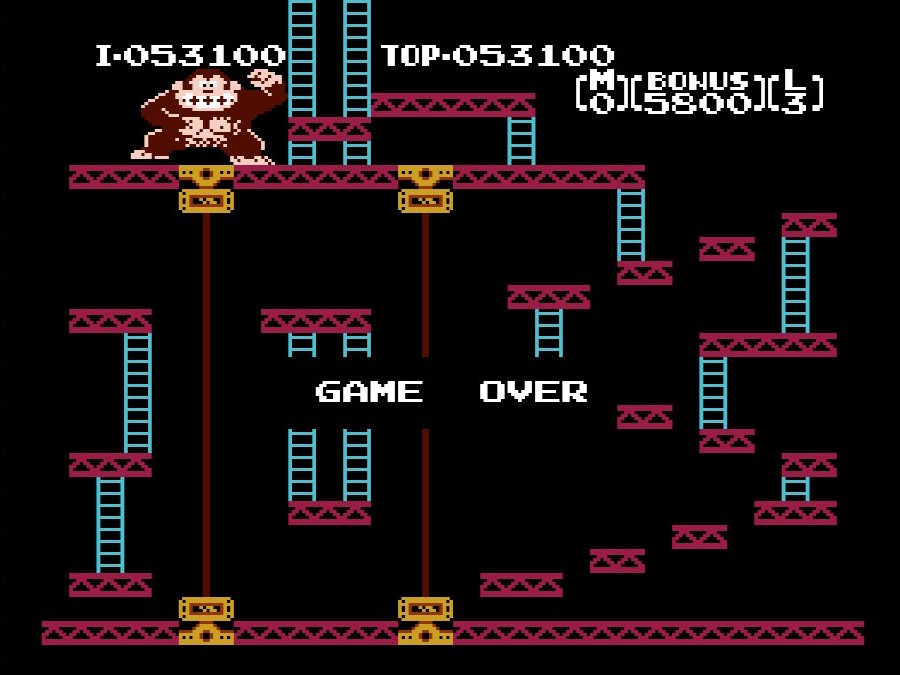 Linked Reviews
"Donkey Kong may have legacy on its side, but the reality is that it's a somewhat shallow gaming experience. As is the case with many early NES titles, this one was ported from an arcade cabinet, repetitive gameplay and all."
— Ron DelVillano, NintendoLife, 6/10

"If you happen to be a nostalgic gamer with rose tinted spectacles firmly in place, or even a huge Nintendo fan who wants to get to grips with the company’s back catalogue, this could be for you."
— Damien McFerran, Virtual Console Reviews, 4/10

"There's just a magical combination of gameplay, sound effects, and fun characters that set Donkey Kong apart from the other arcade games at the time (mostly space shooters and maze games) and made it a huge arcade smash."
— Pat Contri, Ultimate Nintendo, 3.5/5

"Whatever else you might say about this adaptation of the game, it still offered some nostalgic fun, even if did feel like it belonged to a generation of hardware that the NES quietly lowered into a grave."
— Jeremy Parish, NES Works 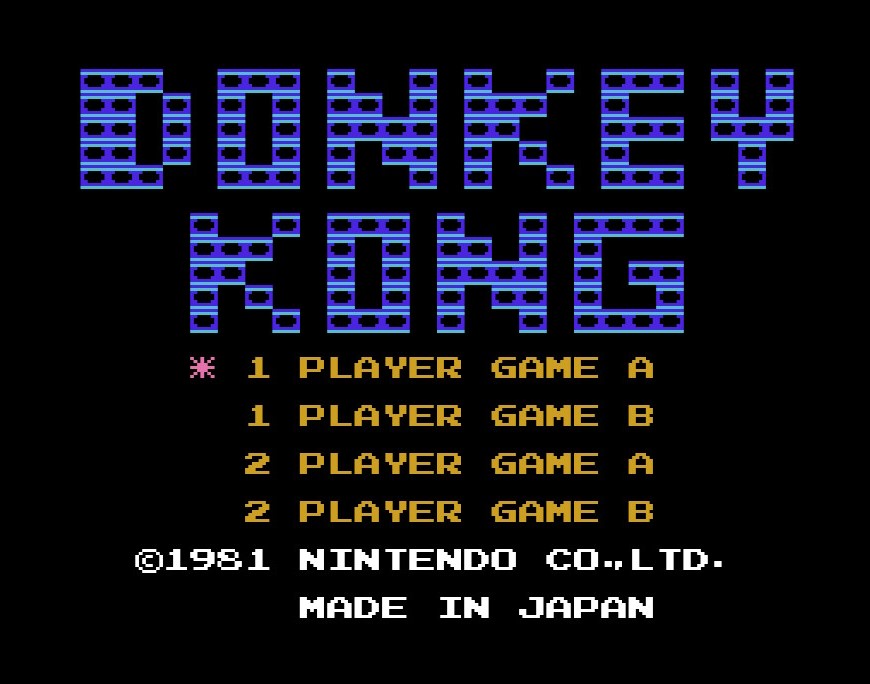