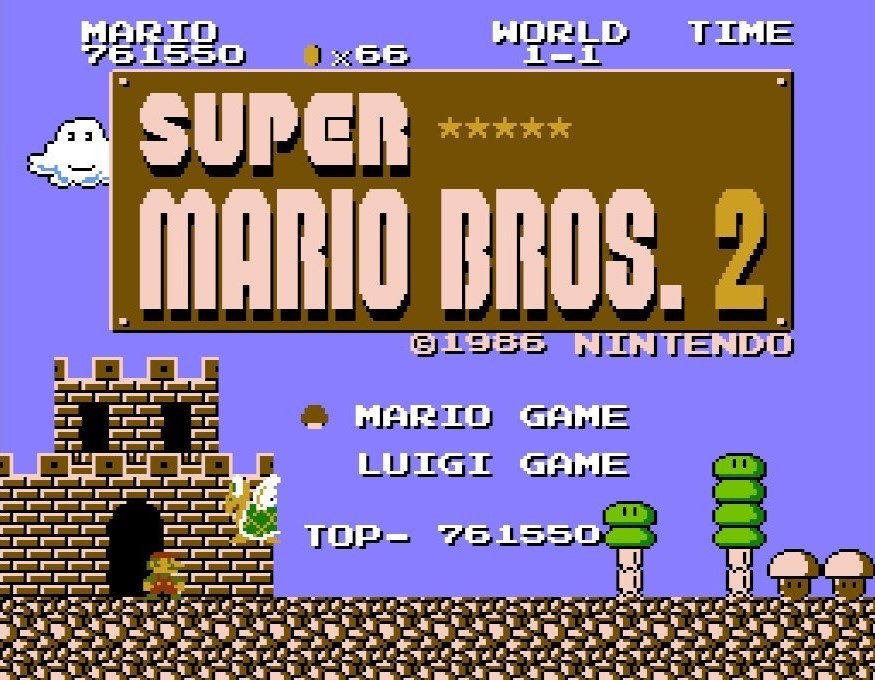 Given the enormous success of Super Mario Bros., Nintendo naturally wanted a sequel. It seems they wanted it so bad that, to quote Dr. Ian Malcom, they "were so preoccupied with whether or not they could, they didn't stop to think if they should." Super Mario Bros. 2 landed on the Famicom Disk System in June of 1986, a mere nine months after the original. In English it was later given the name The Lost Levels since it was never released on the NES.

The prematurity of the sequel shows as soon as you boot the game. It looks almost exactly like the original, down to the same title screen (with a 2), same sprites, and same backgrounds. There are a few visual tweaks, such as new ground tiles and faces on the clouds, trees, mushrooms, and moving platforms. The game has no new power-ups or enemies (except more aggressive red Piranha Plants). There are a few new elements, but they aren't very good. The Poison Mushroom hurts Mario (or Luigi); Super Springs propel him far above the screen; wind in some sections pushes him forward. These new features make levels harder, but not more enjoyable. The one improvement the game did make, which became a staple of the series, was to let Mario and Luigi jump high off enemies by holding B.

The Lost Levels has rightly been compared to a ROM hack (or nowadays, Super Mario Maker levels). Nintendo took the original assets, tweaked them, and created eight new worlds of four levels each. The difficulty was ratcheted up to the point that only hardcore players can play it well. In lieu of the revolutionary level designs that made the original the success it was, they simply made the new levels hard, primarily through difficult jumps. You don't beat The Lost Levels by running at top speed, jumping with abandon. Instead, you must carefully inch your way through levels, knowing the designers are trying to kill you at every turn. The game even has a couple "kaizo" blocks: invisible blocks placed like traps. 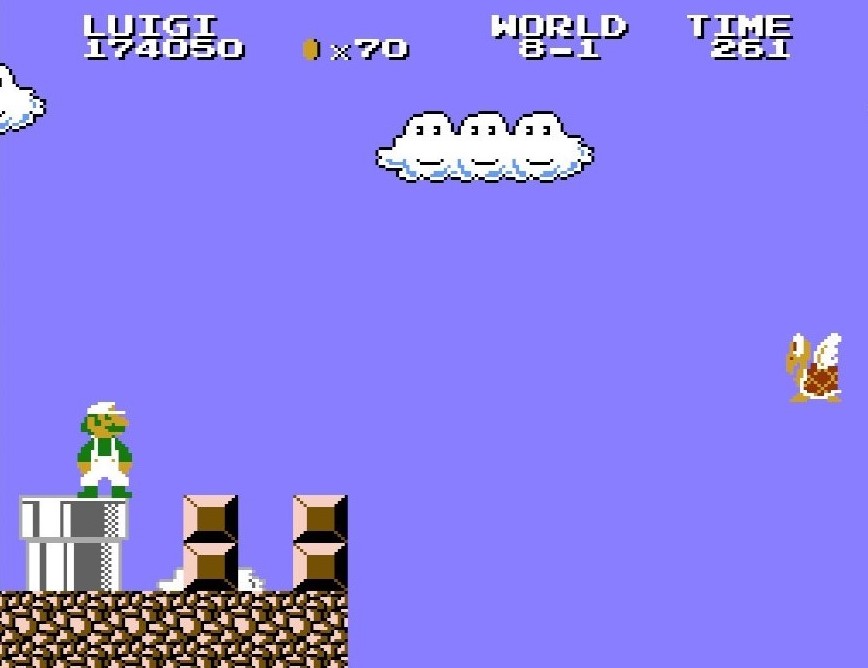 One cool thing about the game is that it includes five bonus worlds. If you beat the game without warps, you can play world 9, which is made up of four silly levels in which, for example, you swim through the air. If you beat the game eight times (being on disk, the game saves this data, putting a star on the title screen each time you finish it), you unlock worlds A-D, which are more remixes of earlier levels than new levels.

Howard Phillips, the most influential early game tester at Nintendo of America, was horrified when he play-tested The Lost Levels for a potential NES release. He described the game as "undeserved punishment" and was surprised Shigeru Miyamoto had designed such a cruel game. In fact, Miyamoto was too busy working on The Legend of Zelda to have much input, though he has said he enjoyed working on hard levels! Phillips shrewdly recommended Nintendo not bring it to the still-fragile American video-game market. Instead, Nintendo re-purposed another Famicom game (Dream Factory: Heart-Pounding Panic) to create the American Super Mario Bros. 2.

When The Lost Levels became known in the West a few years later through screenshots in Nintendo Power, many American players felt cheated, as if Japanese players got the "true" Super Mario Bros. 2, while we were stuck with some off-brand, "fake" Mario game. But this is not so. In my opinion, if only one of these games could be considered the "true" Super Mario Bros. 2, that honor should go to our version. Designed by Miyamoto as a vertical-scrolling take on Super Mario, it's vastly superior to The Lost Levels. It has had a big impact on the Mario legacy through the introduction of four-player character selection (Mario, Luigi, Toad, and Peach) as well as Shy Guy, Bob-omb, and Ninji. Interestingly, both games introduced the concept (in their region) of Luigi jumping higher than Mario but being harder to control. In The Lost Levels, he skids farther when stopping.

Despite being a flawed rush job, The Lost Levels is fun, if you're really good at Super Mario Bros. and just want more, harder levels to play. Judged by that metric, the game is great. The original was so good that even an uninspired sequel is still better than most other games! But if you found the original even a little bit difficult, this game will have nothing for you but the same frustration Phillips felt.

This is the end of my series on Famicom games. In my next post I'll begin covering the rest of the early "black box" games that accompanied the NES’s national release in summer '86.

Linked Reviews
"Super Mario Bros.: The Lost Levels will constantly taunt the player with its level of challenge and meticulously sinister design, but those who enjoy triumph through adversity and can handle a little frustration will enjoy every second of it."
— Robert Hughes, NintendoLife, 8/10

"If you're not a big Mario fan, I would suggest sticking with the original (unless you like extremely hard games)."
— Marcel van Duyn, Virtual Console Reviews, 8/10