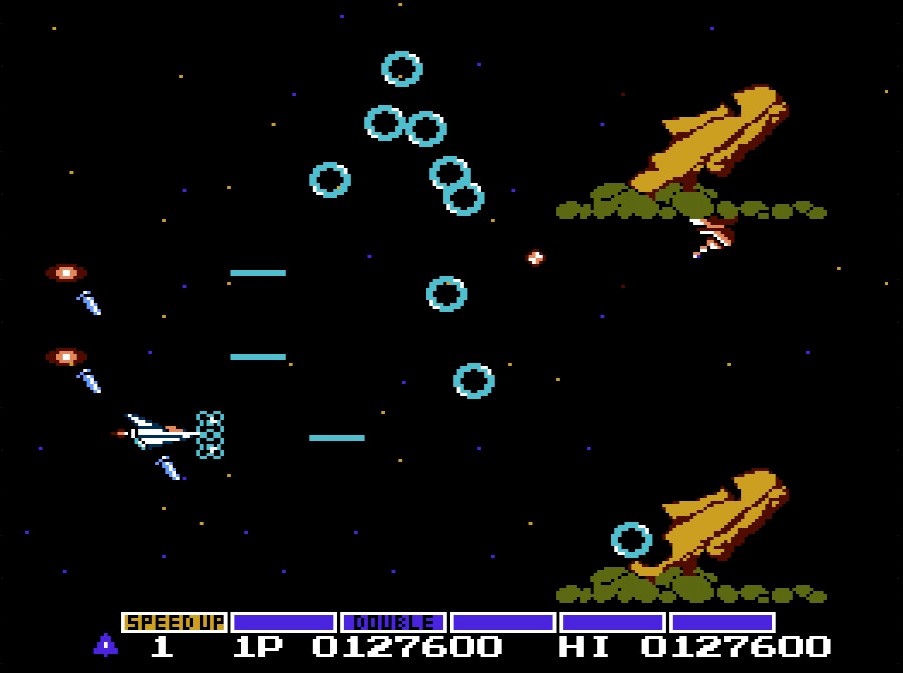 Gradius is a classic arcade port on the NES, up there with Pac-Man and Galaga. Released with the title Nemesis in American arcades at the end of 1985, it established a new sub-genre: the side-scrolling shooter.

Konami brought Nemesis to the NES a year later under its original Japanese title: Gradius. Some compromises were made in the conversion process. For example, the vertical-scrolling segments featured in certain stages were removed. Nevertheless, Gradius on the NES looks and plays beautifully (some flickering sprites notwithstanding). Nintendo's promise to bring fantastic arcade games into your living room was fulfilled.

In Gradius you control a space fighter jet called the Vic Viper that blasts away spacecraft, dodges myriads of bullets, and avoids obstacles. The gimmick of the game is that you choose which power-ups you want. Whenever you pick up a power-up icon, your menu option shifts to the right. The first option is Speedup, an essential first pick as the Vic Viper is too slow otherwise. The next option is Missile. It's tempting to get this next, as it gives you a second attack that shoots downward and then crawls along any surface until it finds a target. In the arcade, Missile had its own button, but since the NES only has two buttons, here it launches with the normal shot.

The next item available is Double, a second shot that shoots upward at a 45-degree angle. This isn't that great, so I wait for the following item: Laser. Instead of shooting one bullet at a time, the Laser mows down all enemies in a line. It's not as good in the NES version because it no longer goes all the way across the screen, but it's still strong. The item after the Laser is called Multiple in the arcade and, weirdly, Option on the NES. Whatever you call it, it's powerful, as it gives you an orb that mimics you, shots and all. You can have up to two of these "Options" on the NES and a whopping four in the arcade. (Our little grey box can handle only so many sprites at once.) Lastly, the anonymous item on the far right is a protective shield that can absorb a lot of damage. A more defensive strategy is to save up for this rather than getting the Laser. Or maybe start with Option! The fun is that you get to decide.

On the other hand, you may not get much chance to decide, for Gradius is hard. Like Ghosts 'n Goblins, this is another game that defines "NES hard." The main reason is that whenever you lose a life, you also lose all your power-ups! You start from scratch at the most recent checkpoint. That's harsh. Without any power-ups, you're likely to lose your last two lives quickly.

In the American arcade version you can continue only three times. Why they limited it like this, I have no idea. Perhaps it was an act of mercy to make you go back to the first level eventually and collect some power-ups from easy enemies again. In the NES version, you can't continue at all! Good luck ever beating this game's seven stages! Regardless of version, I can't get past the third stage, which is full of moai heads (think Easter Island) that bombard you with ring-like projectiles.

Gradius is so hard that the NES developer added what is now the most famous cheat code of all time: the Konami code. Better known for its use in Contra, here it fully powers up the Vic Viper. Now this is fun! You can only use the code once per game, though, so once you die, it's back to nothing. Better to just hit RESET and start again!

Gradius is fun, and it looks and sounds great on the NES. It's so hard, though, that even with the Konami code you're likely to play the first few levels over and over again. For 1986 that was fine, but it feels a bit limiting today. It's also worth mentioning that every level has the same boss: the Big Core, which is repetitive. I think most players would have preferred a mode that lets you keep your power-ups (or some of them) when you die—but then that would not have been as much of a quarter-muncher, would it? 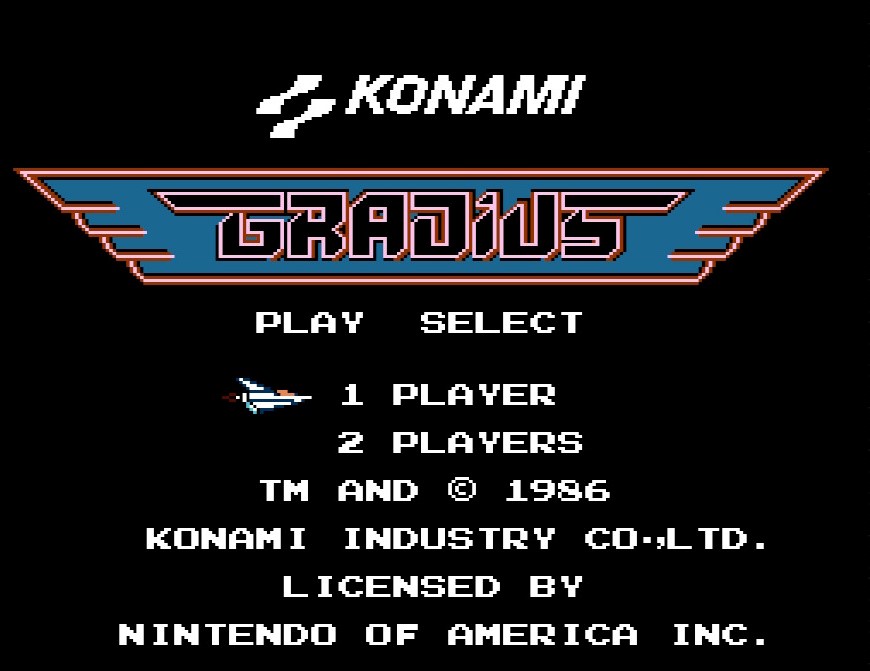 Linked Reviews
"There's nothing like taking a trip down memory lane and reliving the type of legendary and influential arcade experiences that Gradius still offers."
— Corbie Dillard, NintendoLife, 7/10

"The difficulty is high, but this is one battle that's definitely worth fighting."
— Peter Skerritt, Ultimate Nintendo: Guide to the NES Library, 4/5