June 03, 2021
Karate Champ is a port of a 1984 fighting arcade game by Technōs.
On the arcade, Karate Champ used a unique two-joystick control system that required different combinations of movements for different attacks. On the NES, however, the A and B buttons had to substitute for the second joystick. Unfortunately, the combinations are not intuitive and are hard to remember. For example, while A throws a reverse punch, if you press it while holding → or ←, you get a kick instead. To do the low punch (the only other punch), you have to press A and B together while holding ↓. Yet normally A and B together give you a roundhouse kick! And there are more combinations. It's necessary to consult a chart while playing, because the whole thing feels very random.
The bad controls are made even worse by the baffling hit detection, which causes most apparent hits not to count. The game mimics a karate match, meaning it's point based. Every clean hit should (but usually doesn't) score either half a point or a full point. Two points win the round, and two rounds win the match.
Another thing that's weird, and not in a good way, is that when you jump over your opponent, your character doesn't reorient! Instead, your back stays to him. Pushing the opposite direction does not turn you around. You either need to jump backwards to your original location or turn yourself around using a back roundhouse kick (↑ + B). If this doesn't hit, you'll be turned back around, but the A and B buttons are reversed in the same way as left and right! D-pad reversing is completely intuitive and expected, but the reversal of A and B is not. It introduces another layer of confusion to what was already a confusing system. On the arcade, of course, it was two joysticks, which is why they both switched. They should not have copied that over for the NES version! 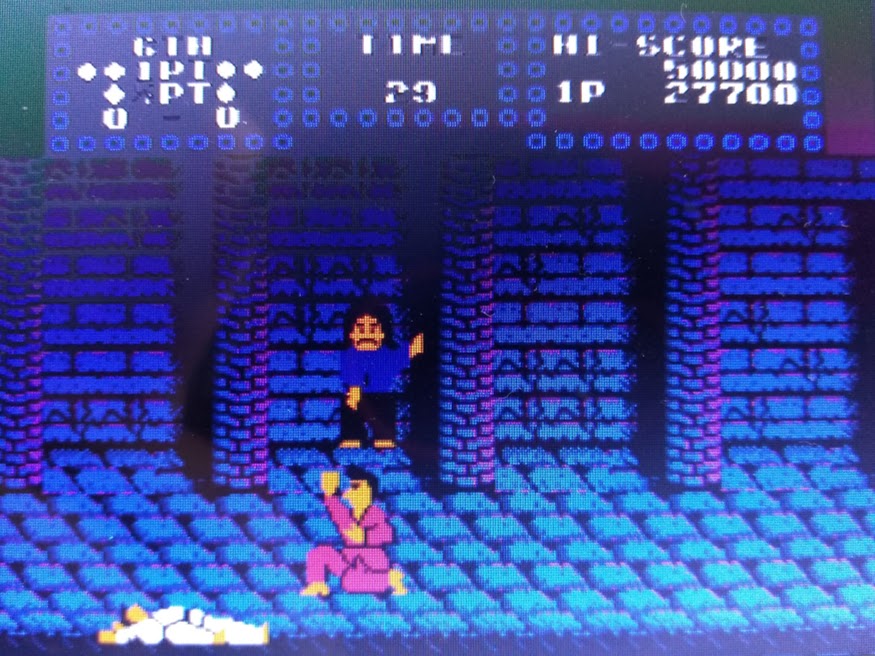 If you beat an opponent, you go on to another one until you lose. In addition to the karate points, you also score video-game points, so the goal is to set a high score. There's a bonus round in which you have to break pots being thrown at you from off-screen. It's extremely difficult because it requires executing the move that will strike at the correct height at the exactly-right moment. As a result, the bonus round is just enraging. The game has no special moves, characters to select, or even background music.
A nice tune does play between stages and on the menu. In addition, this is one of the very few NES games with voice samples! The referee says things like "Point" and "Begin." The highlight of the game is easily the ten backgrounds you fight against, which have a classic 8-bit feel. The gameplay is an improvement over Nintendo's Urban Champion, which only has two attacks (both punches) and one stage. That's a very low bar, though.
There's little replay value here. I'd rather try for a high score on any of the other arcade games I've tried so far. The game's two-player mode is probably more fun, but it's mostly going to be button-mashing unless you've memorized the moves. It's not enough to save this disappointing game. 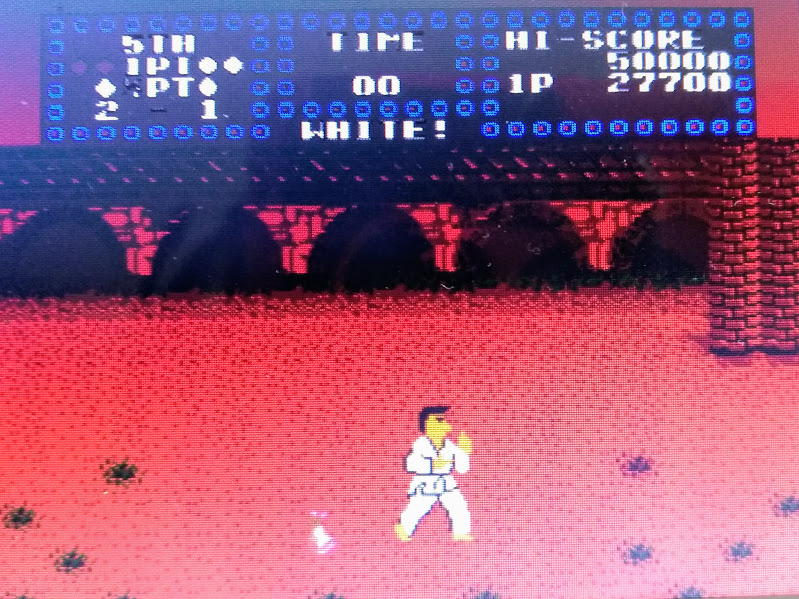 I played Karate Champ on my new Evercade that my wife bought me for my birthday. It's included in the Data East Collection 1.
Grade: F
Gameplay: Not fun (6/20)
Theme: Generic, uninspired concept and characters (12/20)
Controls: Controls are functional, but frustrating (9/15)
Difficulty: Too easy, little challenge (unless you're a high score chaser) (12/15)
Graphics: Good-looking if a bit lackluster (12/15)
Sound: No background music, but it does have voice samples (7/15) 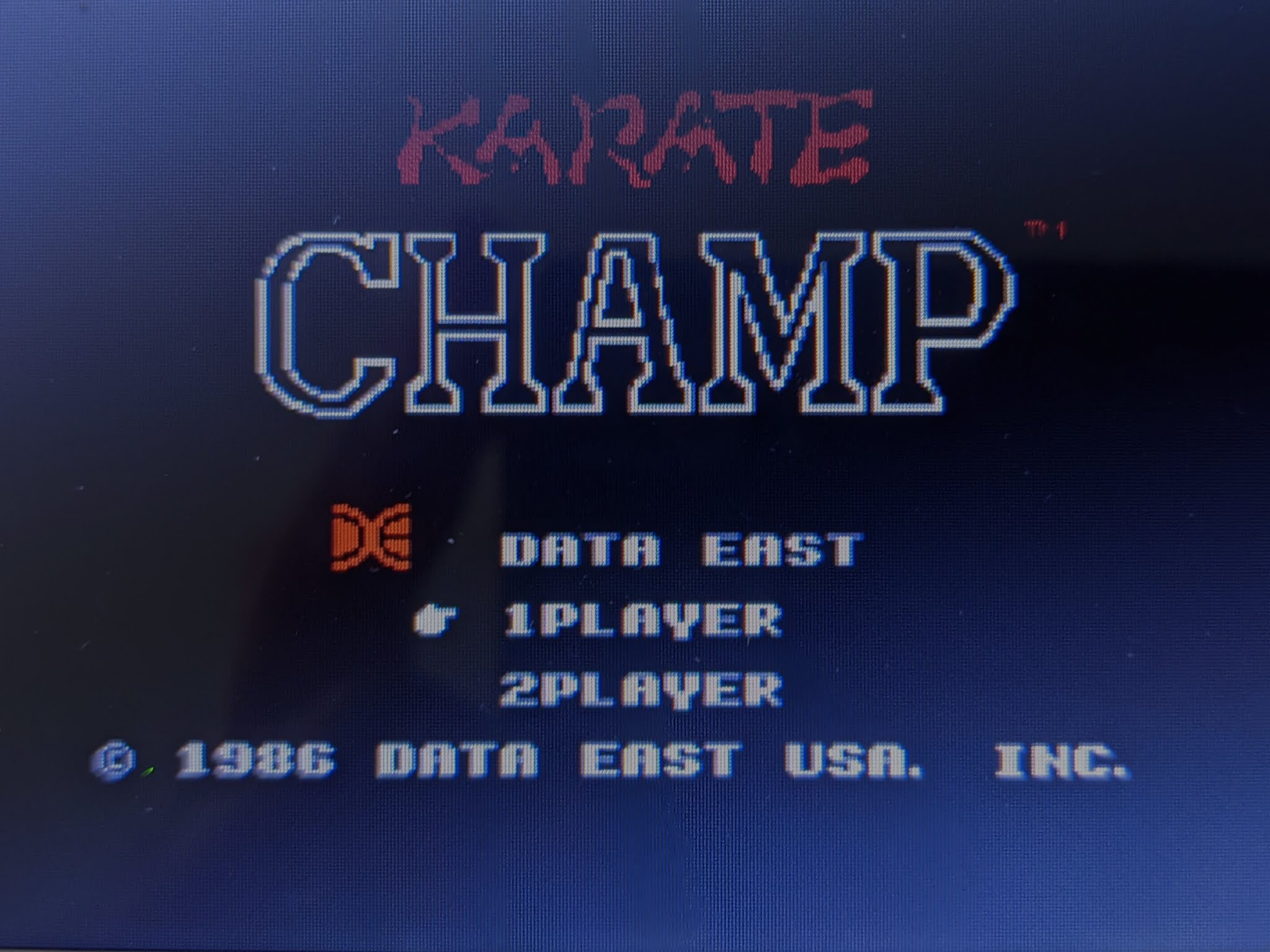 Linked Reviews
"It requires patience, but there's some enjoyment to be had with a solid port of the game that established the fighting genre."
— Pat Contri, Ultimate Nintendo: Guide to the NES Library, 3/5
"Karate Champ has a meaningful place in video-game history, but that place is definitely not the NES. Even here, early in the system's run in the U.S., we've seen ample evidence that the console really wasn't up to matching contemporary coin-op releases."
— Jeremy Parish, NES Works
Stats
Developer: Technōs Japan
Publisher: Data East
Arcade release date: September 1984
NES release date: November 1986
Genre: Fighting
Extend: n/a
My high score (NES): 20,300