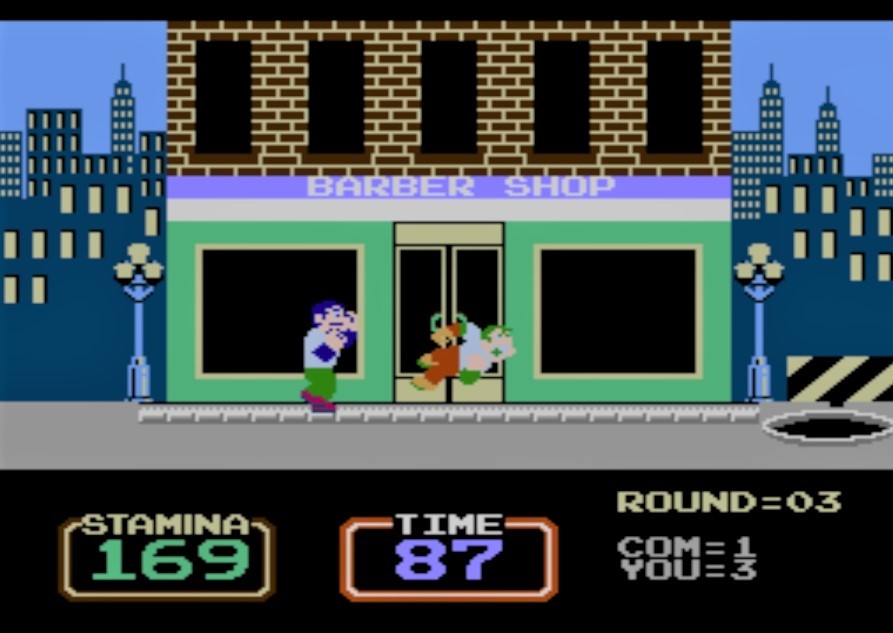 Urban Champion was the first fighting game to arrive on the NES. (The launch title Kung Fu, though it influenced the fighting genre, is a beat-'em-up.) Within months it was surpassed by a port of the popular arcade game Karate Champ, because Urban Champion is just bad.

The word primitive does not do this justice. Urban Champion has even less depth than Tennis, Soccer, Pinball, Golf, and Baseball, and those are all very bare-bones affairs. The game is just two palette-swapped fighters punching each other until one is pushed into a man hole. B throws a hard punch and A a light punch (barely faster). If you hold ↑ while punching, the blow is directed at the head instead of the torso. Holding ↑ or ↓ without attacking blocks the head and the torso, respectively. There is no kicking, jumping, throwing, or special moves. There is a stamina value at the bottom of the screen, but I have no idea what it indicates.

The "champions" move back and forth along a multi-screen street reminiscent of Hogan's Alley. When you fall down, you roll backwards. One fighter will eventually roll off the screen onto a new one. After this happens a second time, a manhole appears at the edge. Instead of rolling off the screen again, the fighter will fall into the hole and lose. Weirdly, even if you fight your way back to the previous screen, the manhole follows you! In other words, it's a best-of-five match where each screen is a round. 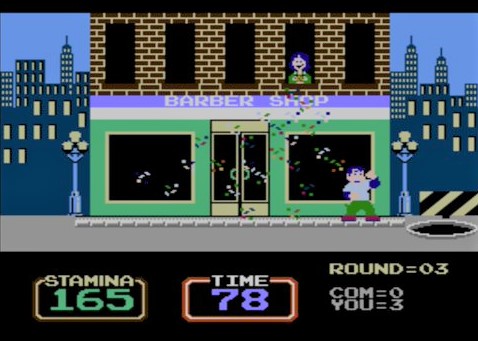 The gameplay in Urban Champion feels random. Until round 20, I was able to win by continuously throwing strong punches! After that, the algorithim controlling the other fighter must have changed. I couldn't predict the computer's actions, so moving backwards or blocking seemed pointless. Just move toward him and keep punching until you win or lose! Making it to higher rounds presumably requires figuring out new patterns for defeating the computer. The game doesn't have points or high scores, but just tracks how many rounds you go. Apparently Nintendo considered this a sports simulation and not an arcade-style game. Street fighting is a sport, right?

Occasionally someone drops a flower pot from a window, which can hit you on the head. Rarely a police car drives by, and the two fighters look innocent until it passes. When you defeat your opponent, a person throws confetti from a window (just like in real-life street fights)! Then you start again, ad nauseam. Or you turn it off. 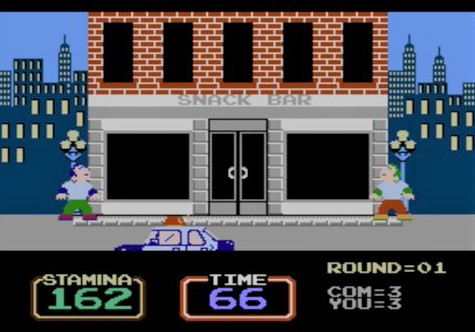 The two-player mode must be more enjoyable because at least then you can compete against a friend. It's still a meaningless button-masher, but head-to-head competition could provide some thrill. Some internet commenters insist this is a good game. They must have played it young, probably against their brother, because only the rose-tinted glasses of childhood memories could save this game.

The game's sole saving graces are its graphics and sound, which bring some of that 8-bit charm. Still, even these are nothing to write home about. I did not enjoy Urban Champion and doubt I'll ever play it again. Weirdly, Nintendo has a lot of faith in this game, as they went to the trouble of doing a 3D remake of it. Unsurprisingly, it was poorly reviewed. 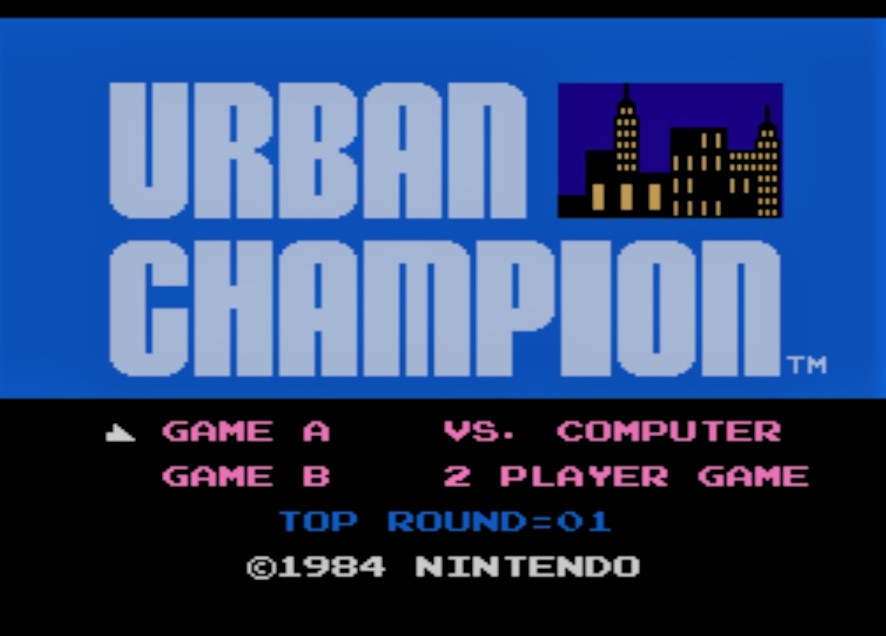 Linked Reviews
"It's rubbish, and we'd rather take to the streets and pick random fights than play this again."
— Thomas Whitehead, NintendoLife, 2/10

"It's competently produced, but the game is a little too simple to be very fun to play for long."
— Pat Contri, Ultimate Nintendo: Guide to the NES Library, 2/5

"Urban Champion is an experience best left in the past."
— Jeremy Parish, NES Works