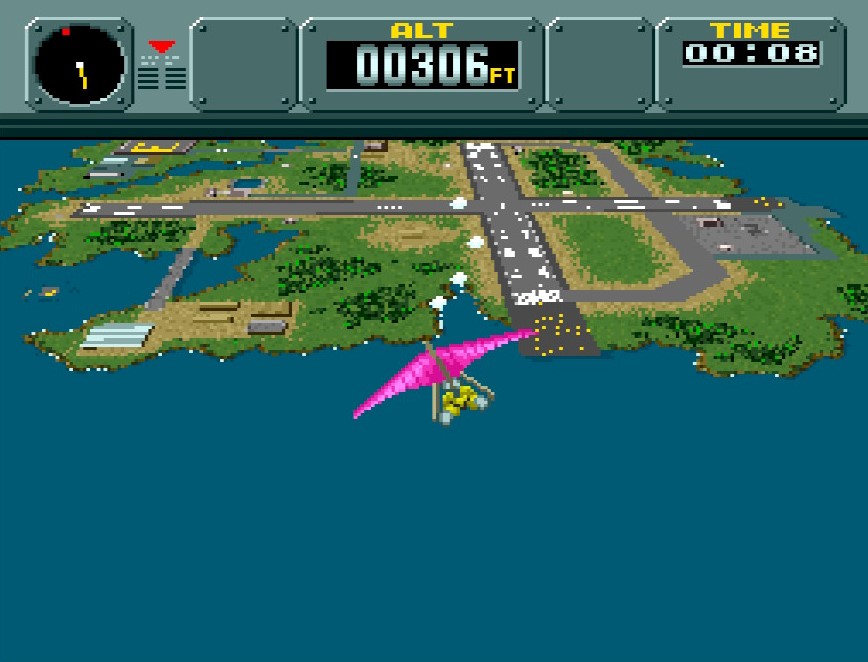 Pilotwings (like F-Zero) was intended to show off the SNES's Mode 7 scaling graphics. Although its visuals hardly impress today, it looked amazing thirty years ago. How much fun it is to play is another question.

The game consists of a series of lessons (or Flight Areas), each of which requires completing objectives. Each objective uses a different vehicle, of which there are four: light plane, skydiving, Rocketbelt, and hang glider. You can do them in any order and are shown the objective, controls, and scoring criteria before you begin. When you complete a lesson, you receive a License Number that is actually a password, which I suppose is clever.

The first lesson has two objectives. For the former, you have to fly the plane along a predetermined path (marked with green dots) and then safely land it on the runway. You're graded on accuracy, time, angle, and beam. The first instructor, Tony, tells you that you have 45 seconds, but don't ask me what accuracy, angle, and beam mean! Basically, you need to land the plane safely. If you crash, you'll get almost no points.

For the latter objective, you maneuver the skydiver through three rings and then land in the target zone. Tony explains that getting one ring is worth 5 points, and getting all three 20. Accuracy, meaning hitting the landing zone, is more important. The center bullseye is worth 70 points and the values decrease as you move outward. (You also get 10 points for "speed," whatever that means!) Each objective scores up to 100 points, and you need 120 points to qualify. This is the only lesson with such a low threshold! 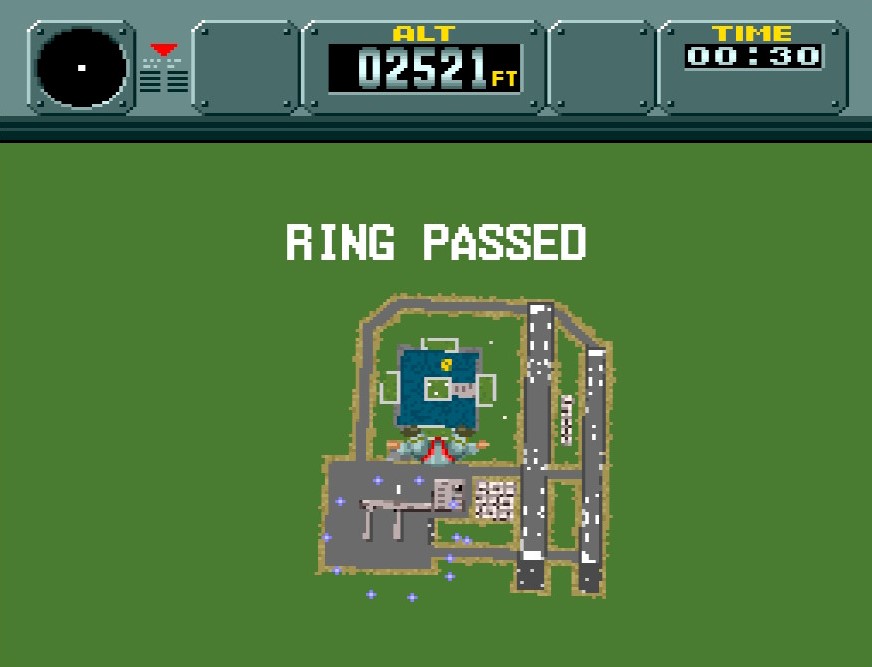 The plane and skydiver objectives for the second lesson, under the tutelage of Shirley, are more difficult than before. The third objective introduces a new vehicle: the Rocketbelt! This is a jet pack like in The Rocketeer, a mediocre movie that came out two months before Pilotwings. The Rocketbelt is easier to control than the other crafts because it can move freely in any direction. If you miss a ring or deviate from the landing target, you can just fly around and try again (although there's a two-minute time limit).

Landing the plane can be tricky, but it's the skydiver I really struggle with. If you miss the target, your score will be horrible. It helps to deploy his shoot later than one would in real life, because once deployed, he floats along and you may badly overshoot the target zone. It seems to help to press ↓ on the d-pad to make him lean backwards ("flare"), which I think arrests your forward movement a little.

What makes this lesson and the next so challenging is that you need 220 points to pass: an average of 74 points per objective. If you totally botch one, you have to ace the other two. To save time, it's better to just retry after a crash, even if you already did fine on a prior objective. Even the flight instructors encourage this. They can be quite harsh with their exasperated words and facial expressions, especially Lance! 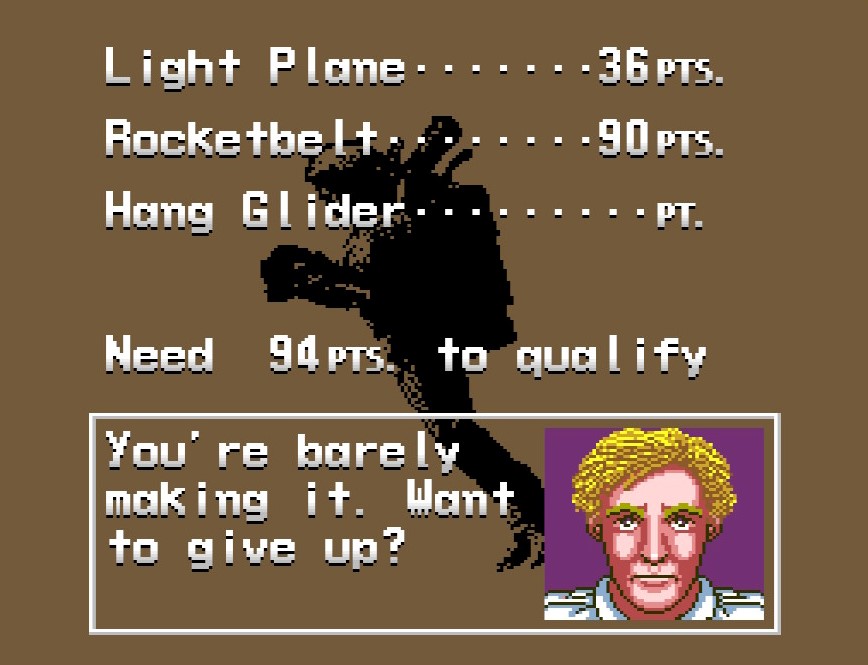 It took me about an hour to beat the second lesson. I came close to giving up. This is why the one time I rented Pilotwings as a child I regretted it. I don't remember how many times I tried the first lesson or whether I made it to the second, but once I shut the game off, I didn't turn it back on the rest of the weekend. Playing as an adult, I have only slightly more patience.

The third lesson has three objectives: light plane, Rocketbelt, and hang glider. For the hang glider, you have to steer into a thermal current that shoots you upward. This part is easy, but I found landing on the target very difficult. Pressing A to "flare" helps you slow down so you don't crash into the ground, but you still have to circle around to the target and time the landing. I tried this repeatedly with hilariously bad results before quitting.

Some people love flight simulators, but I don't. I give the game credit for having many different vehicles and for offering high-quality simulation for 1991. There is even a helicopter, which you fly in a "Secret Command" rescue mission after lessons 4 and 8. I don't think I'll ever get to lesson 4, though. Also, the music is kind of neat; it sounds like SimCity.

The only enjoyment Pilotwings offers me is the feeling of triumph after repeated failure. But it just isn't worth it to spend hours practicing it over and over when there are so many other games to play. It's too frustrating. 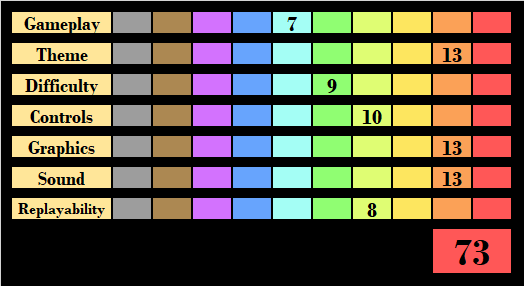 Linked Reviews
"Alongside the pseudo 3D effects, the controls in Pilotwings are of its time – so for newcomers it's finicky to practise precise movements in a skill like Skydiving – but it's a breath of fresh air that the game doesn't hold your hand."
— Jamie O'Neill, Nintendo Life, 7/10

"It succeeds in doing to flight simulators what Nintendo has done to so many other sports or hobbies – finding a critical balance between arcade and simulation."
— Daniel Greenberg, Ultimate Nintendo: Guide to the SNES Library, 3.5/5

"It was a dazzling showcase for a remarkable hardware feature, but it lacks a certain something that could have elevated it to the same classic status as F-Zero and Super Mario World."
— Jeremy Parish, Super NES Works

"This was 3D gaming – not 3D as we would later come to define it with polygon counts, but 3D nonetheless in that you could take to the skies here and feel the experience of free flight and sense the depth and distance of the ground below in ways the NES could never hope to present."
— IGN, #80 of Top 100 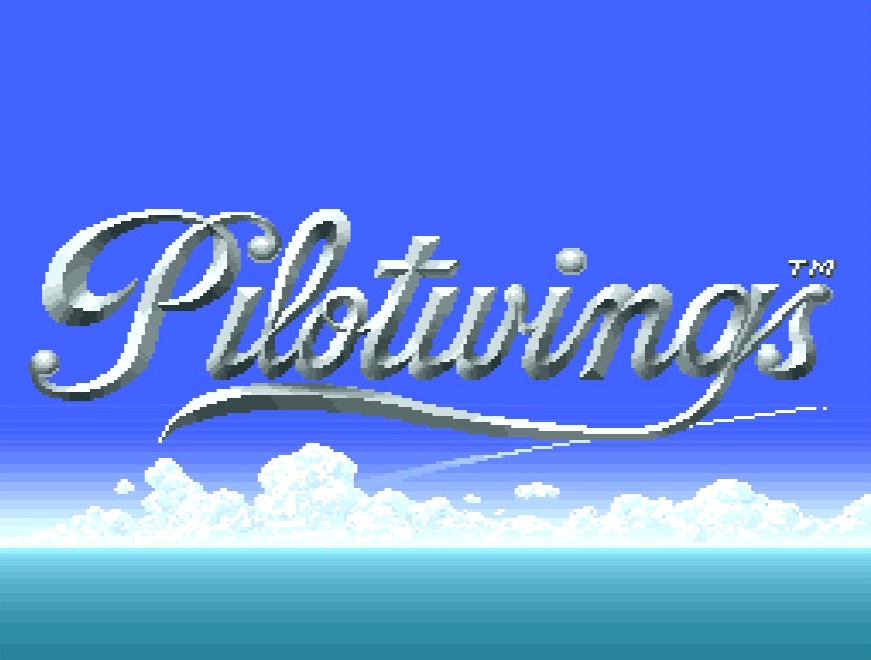