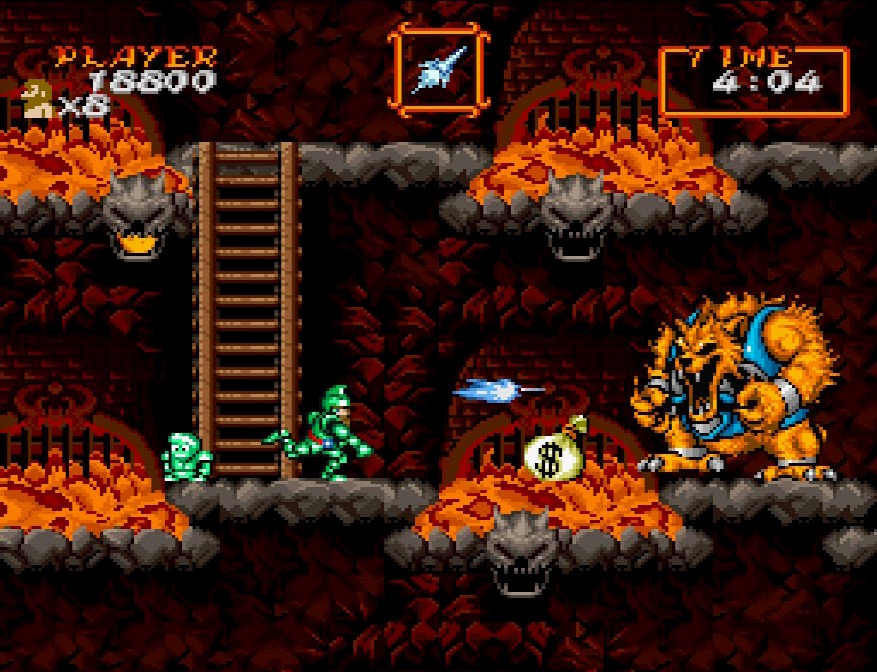 Super Ghouls 'n Ghosts follows the formula of Ghosts 'n Goblins to a tee. You control a knight named Arthur who must rescue Princess Guinevere by battling endless hordes of monsters and demons: Zombies, Ghosts, Weredogs, Bats, Red Arremers, and even Mimics (the D&D monster that disguises itself as a treasure chest). He picks up various weapons along the way but can only hold one at a time. Some of them (especially the torch) are worse than the throwing spears he begins with. Three new weapons are the crossbow, scythe, and tri-blade. The crossbow is good because it shoots two arrows at once, at about 45 and 30 degree angles upward. I avoid the scythe because Arthur can throw only one at a time and the ability to arc it downward by holding ↓ does not compensate for this. The tri-blade is a weak boomerang attack.

There are a couple new elements in Super Ghouls 'n Ghosts. The second level, for example, is an auto-scrolling water level, with Arthur riding a raft on a rising and falling body of water. Several segments effectively use Mode 7 rotating effects (though the shaking screen in Stage 5 made me motion-sick!). Some treasure chests are now traps: a Jester pops out whose magic projectile briefly turns you into a baby, a bee, or a helpless woman (yikes). The stage bosses are large and interesting. On the whole, Super Ghouls 'n Ghosts delivers the high quality you expect in an SNES game.

The most notable addition is that Arthur now can do a second jump in mid-air. You might think this would make the game easier, but it often has the opposite effect, for it gave the developers a new tool with which to torture you. You see, you have to use the double jump to traverse many gaps and obstacles, and if you don't time it right, Arthur will find himself jumping too far or not far enough, landing in a ditch or on an enemy. The third stage, for example, contains some precise jumping between stone platforms in lava. 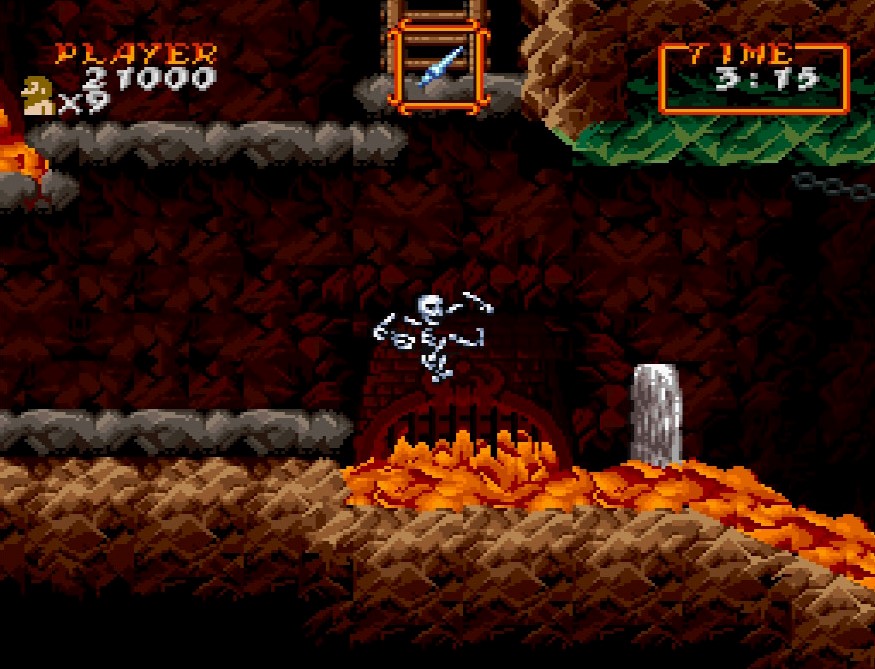 More fun is the addition of armor upgrades. The Bronze Armor (which is green) despite the name only upgrades Arthur's weapon, not his defense. For example, when wearing it, the crossbow fires three heat-seeking shots! If he gets hit, it's back to his skivvies. If you can keep the Bronze Armor long enough, though, a chest with Golden Armor will eventually appear. It lets you use a magical attack by holding down Y or A to charge it up and then releasing. It also comes with a Moon Shield that can absorb one projectile before breaking. As long as you have it, you can also find the Sun Shield, which can absorb three hits! The game is more fun with the Golden Armor, but unless you're an expert, this will rarely happen. 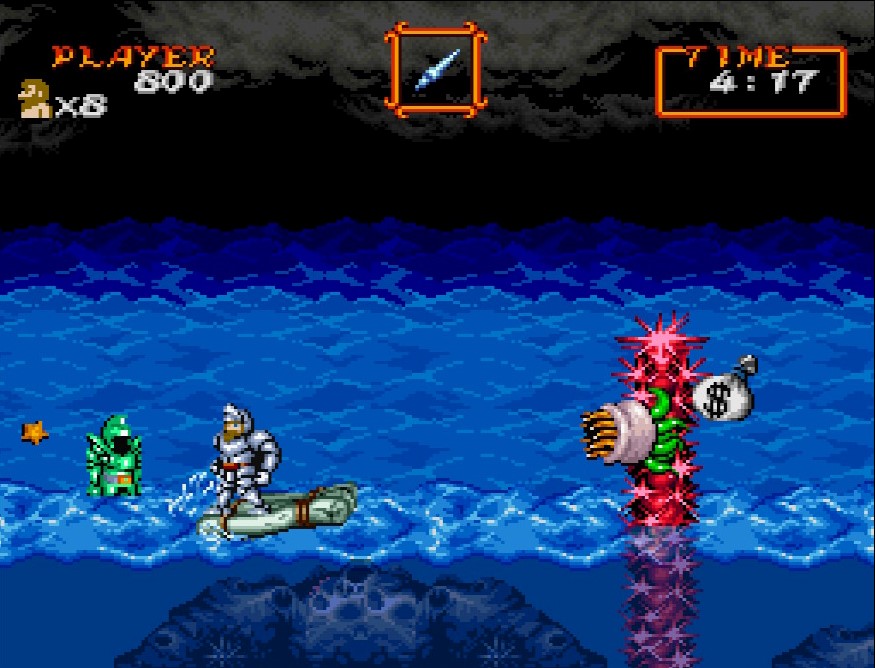 Super Ghouls 'n Ghosts has seven stages (one more than Ghosts 'n Goblins), and just like in the original, you have to play through the game a second time with increased difficulty to see the true ending. This is, of course, ridiculous, but this time there are actually in-game differences to motivate you to play again. On the second playthrough, a new weapon, the Bracelet, becomes available. If you beat the seventh level with it, you are finally allowed to play the final boss, Sardius. I'm not sure whether this is better or worse. In Ghosts 'n Goblins, you could just turn the game off after the first victory and say, "Whatever, I beat it" because you had already beaten the final boss. Here, though, you really have to play it the second time because it's the only way to meet the final boss! That just feels cruel. On the other hand, you could argue that this merely increases the game's longevity.

Just as in Ghosts 'n Goblins, the game's saving grace is that it lets you continue at the halfway point of each level, so you never are forced to replay more than half a level at a time. Mind you, beating a half-level may take you fifty tries! It's all about practice and pattern recognition. Once you have mastered the movements of the enemies, you will succeed; the only question is how long it will take and whether you enjoy the process enough to bother. For many players, it makes you want to throw the controller. Personally, I can go at it for a while, slowly pushing forward as long as I'm getting a little better each time. But it's hard to play for more than an hour at a time because it gets tedious.

An oddity of the game, recalling its arcade roots, is that it uses a credit system for continuing. In lieu of trying to insert quarters into your console (not recommended), you earn extra credits for collecting enough money bags. The exact number required depends upon which of the four difficulty options you choose. Don't let these options fool you: this game is extremely hard even on Beginner. You can also choose how many lives to start with, so you may as well crank it to nine.

Your enjoyment of this game depends upon how you feel about the difficult grinding I just described. I don't use save states, but I'm sure they would make this game more fun. Aurally and visually the game holds up very well, so you can appreciate it aesthetically as you die over and over again. 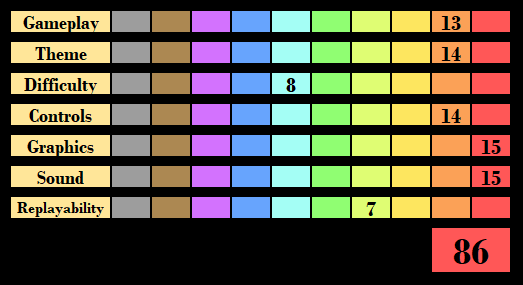 Linked Reviews
"Newcomers to this legendary SNES title could well be put off by its almost superhuman challenge. However, giving up too early means missing out on one of the most accomplished platform adventures of the '90s."
— Damien McFerran, NintendoLife, 9/10

"There are impressive graphics and effects on display here in terms of the foregrounds and backgrounds. Definitely an early SNES standout."
— Pat Contri, Ultimate Nintendo: Guide to the SNES Library, 4.5/5

"This SNES sequel to the NES headache-inducer Ghosts 'N Goblins was, for its part, just as likely to send players reaching for the Tylenol and picking up the broken pieces of their shattered controllers from the ground. But at least things looked a whole lot prettier this time around."
— IGN, #51 of Top 100

"Super Ghouls 'n Ghosts is the video-game equivalent of receiving a savage beating while strolling through a gallery of beautiful art. It's not a bad game, but it's definitely a game that makes you feel bad."
— Jeremy Parish, Super NES Works 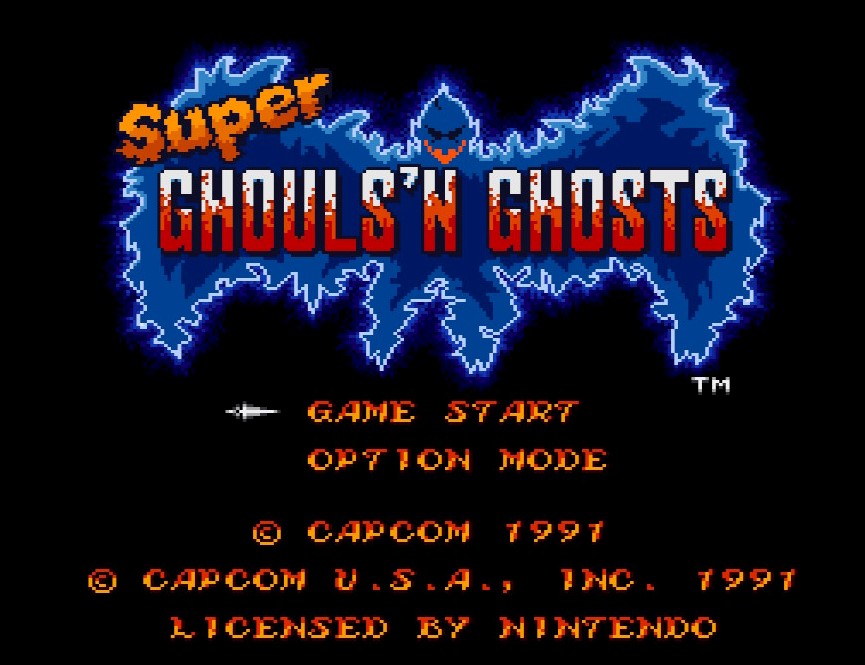