Thirty years ago this month Nintendo released Super Tennis. The word "super" indicates nothing more than that it's a Super NES game, the replacement for the original Tennis on the NES. It blows that dinosaur out of the water.

Super Tennis has three main draws: realistic tennis simulation, a Circuit mode, and gameplay options. The game achieves a surprisingly intricate level of tennis simulation by mapping each of the four main buttons to a different type of stroke, depending whether you're near or far from the net. When your player is near the base line (the back boundary of the court), A is slice (slow with low bounce), B is flat (normal), X is top spin (fast with high bounce), and Y is lob (slow with high bounce). When you're near the net, A is light volley, B is strong volley, and X and Y are still top spin and lob, respectively. However, if you hit the ball with A or B before it bounces, you instead do a drop shot, which is a light hit that gets the ball just over the net.

In addition to the myriad types of strokes, you can aim your shot with the d-pad. The eight possible directions go where you would expect (except down-left and down-right are unused), with ↓ aiming near the net and ↑ near the base line. And there's still more! A quick hit (hitting the button quickly) will send it across the court, whereas a slow hit will keep it on the same side. So for example, if your player is near an edge and you tap the button quickly, the shot will be aimed toward the opposite edge.

Not being a tennis player myself, I have found it next to impossible to remember the different types of strokes. For me, it's a struggle just to get to the ball and hit it without missing. Aiming or choosing a particular stroke don't enter into the equation. Even if I could remember all the different strokes, I wouldn't know when or why to use them. As a result, I am really bad at Super Tennis, not having won a single set. No doubt repeated play would drill it all into me eventually, if I really wanted to learn.

So I can't say how well implemented the various strokes are in terms of real-life accuracy. But if they work even half-way decently, then this should be a fantastic game for any tennis player who wants to play a video version of their sport. It's lightyears beyond moving a tiny faceless sprite toward a dot and hitting one button!

You can of course play against a human opponent, but the Circuit is a surprisingly elaborate solo campaign. You compete against thirty-one other ranked players. The Circuit has four major tourneys and four minor, in various cities of the world. Each tournament features sixteen players in a single-elimination bracket. Interestingly, you can decline to participate in each tourney. By not participating, you lose the ability to increase your ranking, but you also give your player a chance to rest. After each tournament their strength decreases, increasing your challenge until you sit one out. If you're good enough, you can try for the Grand Slam, which means winning all four major tournaments. The game gives you a password after each tournament, so you don't have to do the whole thing in one sitting (or leave your system turned on all night long, like we used to do with certain NES games—I'm looking at you, Blaster Master). 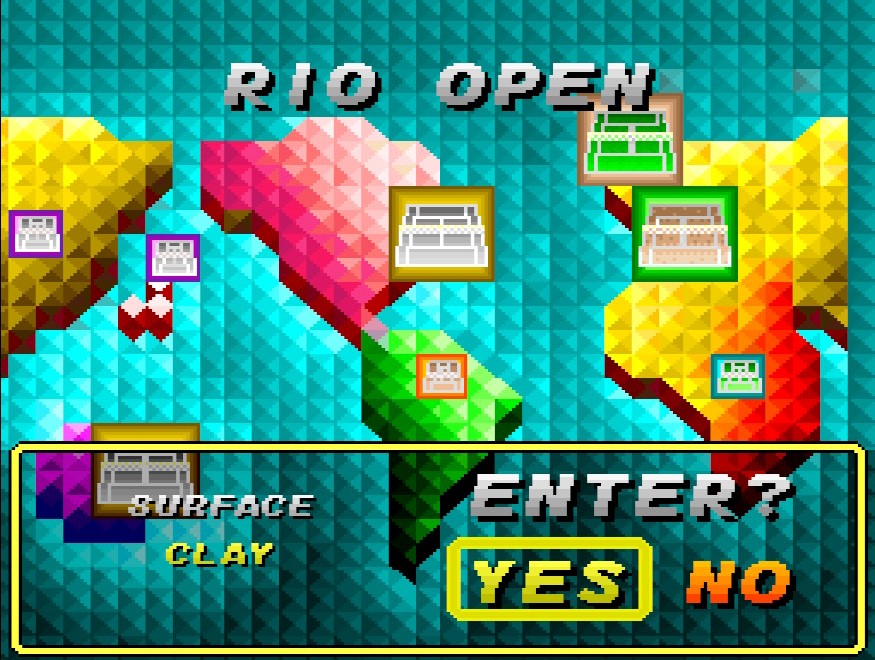 Finally, Super Tennis has a variety of options. There are two difficulty choices: women's and men's, the latter being harder. There are three types of courts: concrete, grass, and clay, which affect how high the ball bounces, as in real life. You can play singles or doubles, and match lengths of 1, 3, or 5 sets. For each gender, there are ten players, each possessing unique strengths and weaknesses. You can't see their stats on screen, unfortunately, but the manual describes them in real-world terms, noting that there are a whopping twenty factors. From the character descriptions, I can determine that these include accuracy, power, front-and-back footwork, right-and-left footwork, service, acing, return, forehand stroke play, backhand stroke play, net play, base line, volley, jumping volley, lob, and passing shot. The rest may be the various types of shots (slice, flat, top spin, drop shot, and smash), as that makes exactly twenty. Being able to choose a character who works with your preferred play-style is another plus to this game. 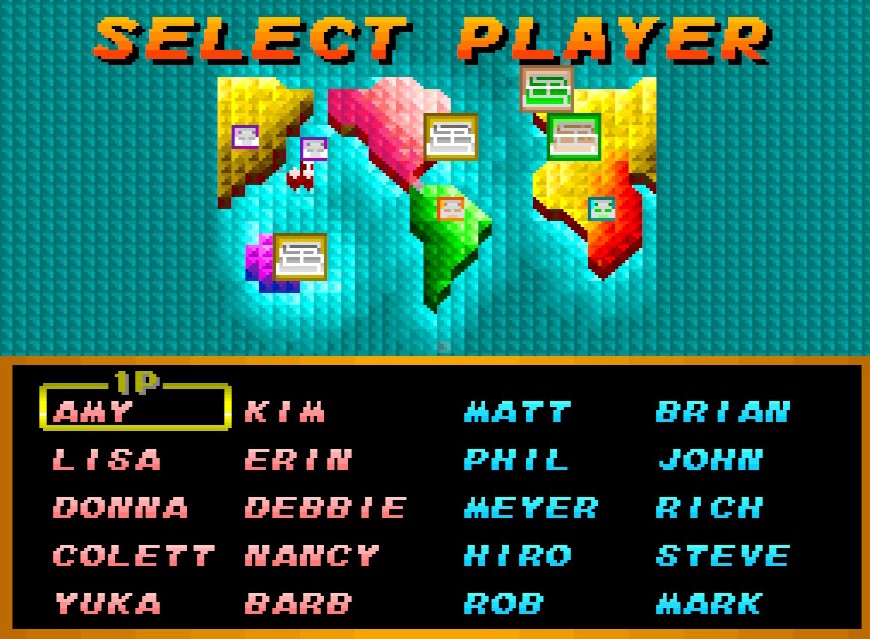 Although Super Tennis's visuals far exceed its 8-bit predecessor, they are nothing to write home about. The game has voice samples of things like "play" and "fault," as well as audience applause, but there is no background music during games. That's a missed opportunity, as each city should have its own theme music. That may sound like a small thing, but I think a distinct track appropriate to each city would really have enhanced the experience.

It's hard for me to judge Super Tennis, not understanding tennis and struggling just to hit the ball (both in the game and in real life). Furthermore, I'm not interested in learning when I could play an RPG or platformer instead. But to be objective about it, it seems to me that the huge variety of options, characters, and strokes make this an advanced tennis simulation and not some glorified version of Pong. If this was the goal of Super Tennis (and I think it was), it succeeded brilliantly. 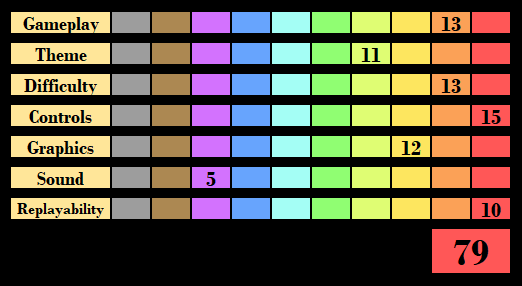 Linked Reviews
"Of the tennis games on the SNES, this one stands alone at center court."
— Peter Skerritt, Ultimate Nintendo: Guide to the SNES Library, 4/5

"Super Tennis turns out to be a technically unexciting take on the sport, featuring a bevy of single- and multiplayer options, fast-paced gameplay, and an extensive bracket mode for those who really get into it."
— Jeremy Parish, Super NES Works 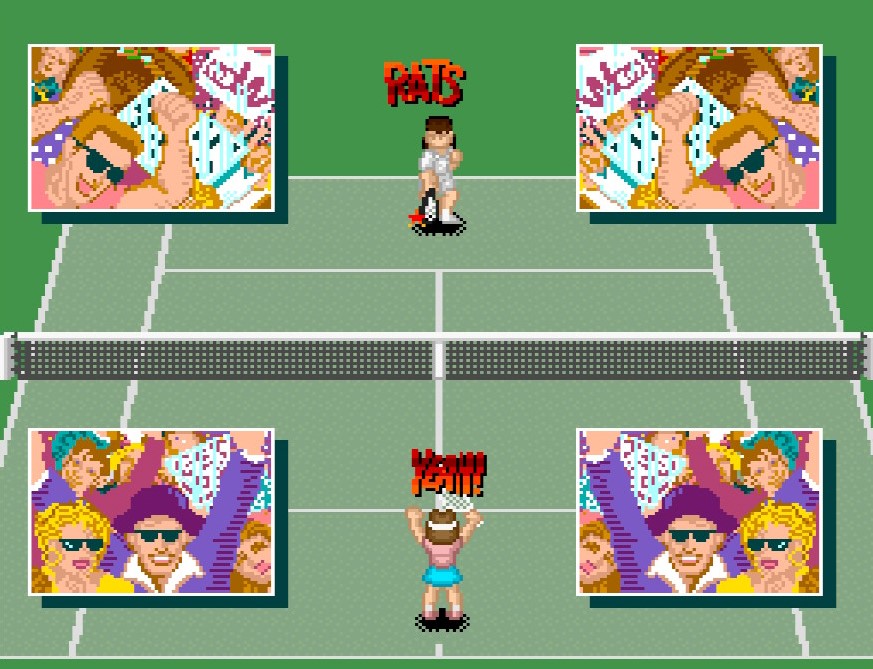