Rygar: The confusing quest to save Argool 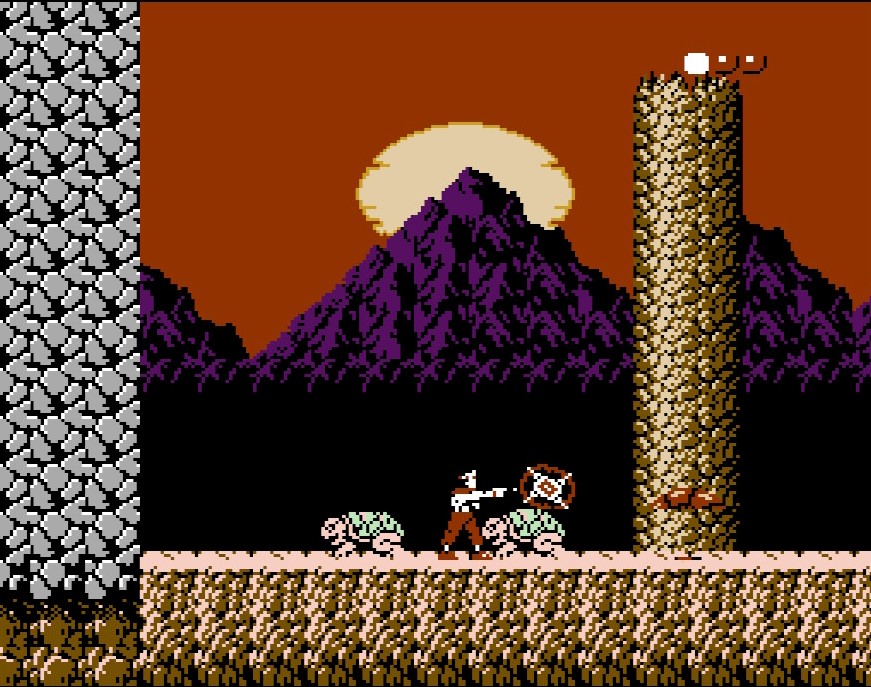 Rygar for the NES bears the name of a 1986 arcade game, but rather than porting their side-scrolling platformer, Tecmo decided to create a unique, new title of the same name. They could have taken a cue from themselves and called it Mighty Rygar.

Rygar is a side-scrolling, action-adventure, platforming game with light role-playing elements, similar to Kid Icarus and Zelda II. Rygar is a legendary warrior with a unique weapon: the Diskarmer. It's a spiked disk on a string that shoots out in front of him, then returns. Rygar can also bounce off the top of most enemies, briefly stunning them.

I rented Rygar once, but found it too confusing. In-game, you are dependent upon terse directions given by hermits. These directions refer to areas by name and thus require the manual, which identifies each region by name and shows how they fit together on a map. I think it's cool when, given the technical limitations of the time, games were made to work in conjunction with the manual. Designers could print important information, instructions, and maps they couldn't fit into the game. This became a problem, though, with video-game rentals because the manual was usually not included, and it wasn't like you could look things up on the internet! The game's sub-screen (press START) is also almost inscrutable without the manual (or the Official Nintendo's Player Guide). The sub-screen shows three attributes on the left side: Tone, Last, and Mind. "Tone" means the strength of your attack (think "muscle tone"), "last" means stamina (as in how long you can last), i.e., the size of your health meter, and Mind lets you activate powers. 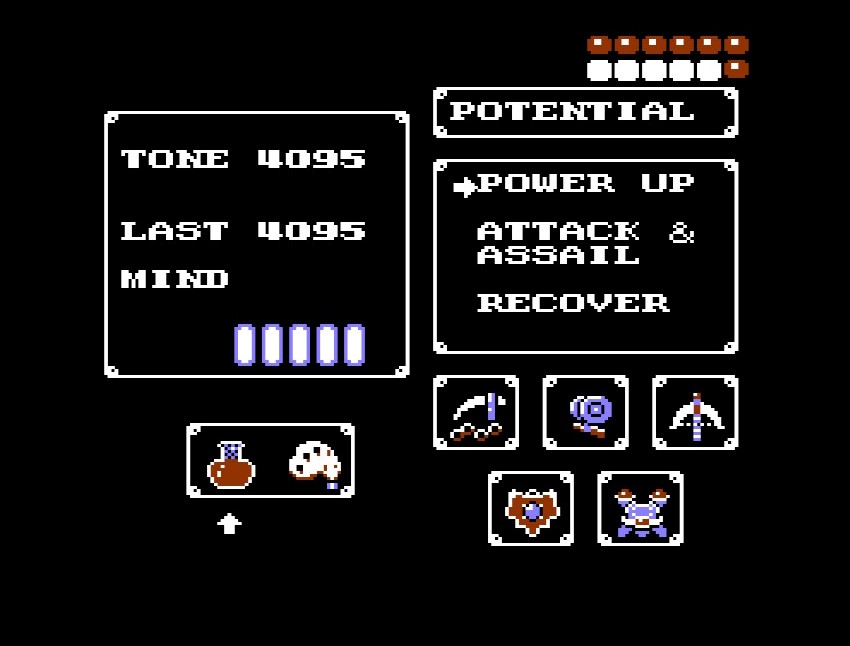 These powers are listed on the right side of the sub-screen under the opaque heading "POTENTIAL" (short for "potential capacities"): Power Up, Attack & Assail, and Recover. If you have enough Mind strength, you can spend some to use the powers. The first power is fantastic, as it increases the length and power of the diskarmer until Rygar dies and costs only three points of Mind strength. For five points, Attack & Assail makes Rygar's attack hit all enemies on screen for the next ten swings. Recover fully heals Rygar, but costs all seven points. You increase your Mind strength by getting capsules dropped by enemies. The game is considerably easier if you begin by grinding enemies to get ten Mind capsules: three to use Power Up, and seven to save for Recover. Enemies spawn constantly, so grinding doesn't take too long.

Tone and Last go up automatically as you defeat enemies. Another reason to do some grinding at the start is to get enough Last to gain a fourth unit in your health meter. Fortunately, even if you do die, you simply press START to continue from the same region in which you died. Absurdly, the game doesn't use a password system, so on the original hardware you have to leave the system running if you don't want to start all over the next time you play.

The goal of the game is to defeat Ligar (whose name sounds suspiciously like Rygar). To do this, you have to collect five sacred treasures from the five "Indora gods" throughout the land of Argool. These are the Grappling Hook, Wind Pulley, Crossbow, Coat of Arms, and Suit of Armor. The Grappling Hook lets Rygar go up or down between platforms. The Wind Pulley lets him cross rope lines across ditches. Doing this is notoriously difficult, as you have to line it up just right and risk falling into the ditch in the process. The Crossbow isn't a weapon, but instead creates a line to use the Pulley on. You use this wherever you find a post without a line. The Coat of Arms proves Rygar's worthiness to receive medicine from some hermits. Finally, the Suit of Armor strengthens his Last.

The game is easier once you have the Coat of Arms. Not only is medicine a useful backup to heal Rygar, it lets you bypass one of the game's more annoying features: after a Game Over, Rygar begins with only three health no matter how large his health bar (the maximum is twelve). Without medicine, you have to grind enemies for potions (which restore one health each) or get seven mind capsules and use Recover (on top of the three you'll want for Power Up).

Finally, there is another necessary item, though it's not one of the sacred treasures: the Flute of Pegasus. You have to play this Flute at the top of a tower in Rolsa Valley to gain entry to Ligar's castle, the final stage. To know this, you either need a guide or must pay attention to the directions given by hermits.

The game is relatively short, containing ten areas. Most of them are connected by Garloz, one of three overhead-perspective areas. As I said, the manual labels all the areas and shows how they connect and which regions hold which sacred treasures. If you ignore this information, you'll spend a lot of time wandering about. That's not necessarily a bad thing, though, as it will give you a chance to increase Rygar's Last and Tone. Five of the areas ends with a boss. None of them is hard, as long as you've powered Rygar up along the way.

Rygar has a great concept, though the level designs and enemies are a little generic. The graphics are classic NES, and the music is great. The biggest shortcoming is how inscrutable the game is if you try to pick it up and play without reading the manual first. This would never fly today and was barely tolerable in the 80's. But when you're replaying a lot of mediocre NES games, like I am, one with the depth of Rygar stands out. Once I understood how it worked and started making progress, I was hooked and quickly beat it. It reminded me of Kid Icarus, another NES game I fell in love with this year. I highly recommend Rygar for NES fans. Grade: A-
Linked Reviews
"Rygar's action/adventure gameplay elements have helped it attain a sort of 'cult classic' status."
— IGN, #59 of Top 100
"The theme and concept of the game and its fantastical world is very fun, and the music and graphics are both above average and complement the experience."
— Pat Contri, Ultimate Nintendo: Guide to the NES Library, 3.5/5
"Along with Kid Icarus, Rygar was part of a new breed of NES games that hinted at the potential of shallow action games to draw players into vast and immerse worlds. It's a true NES great."
— Jeremy Parish, NES Works 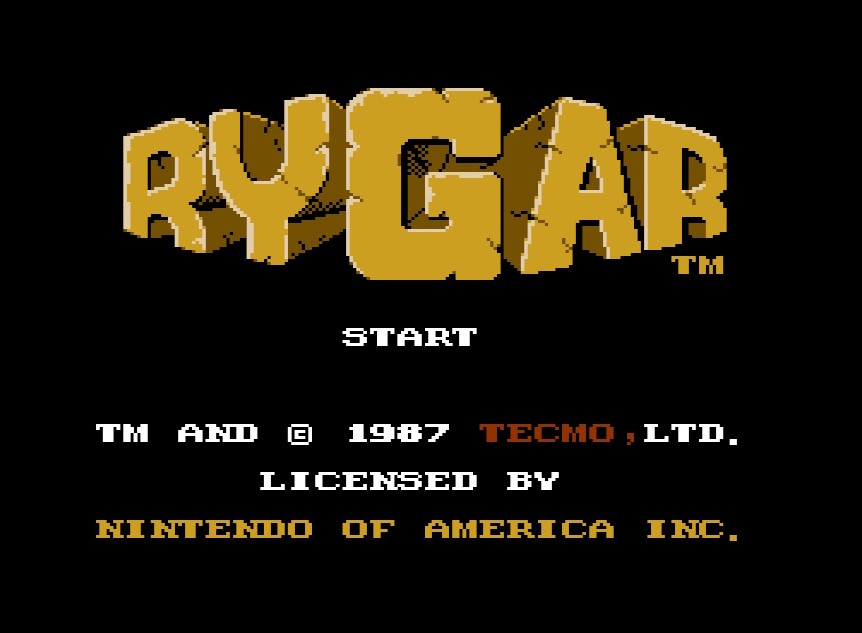