RPM Racing: Neither radical nor psychotic 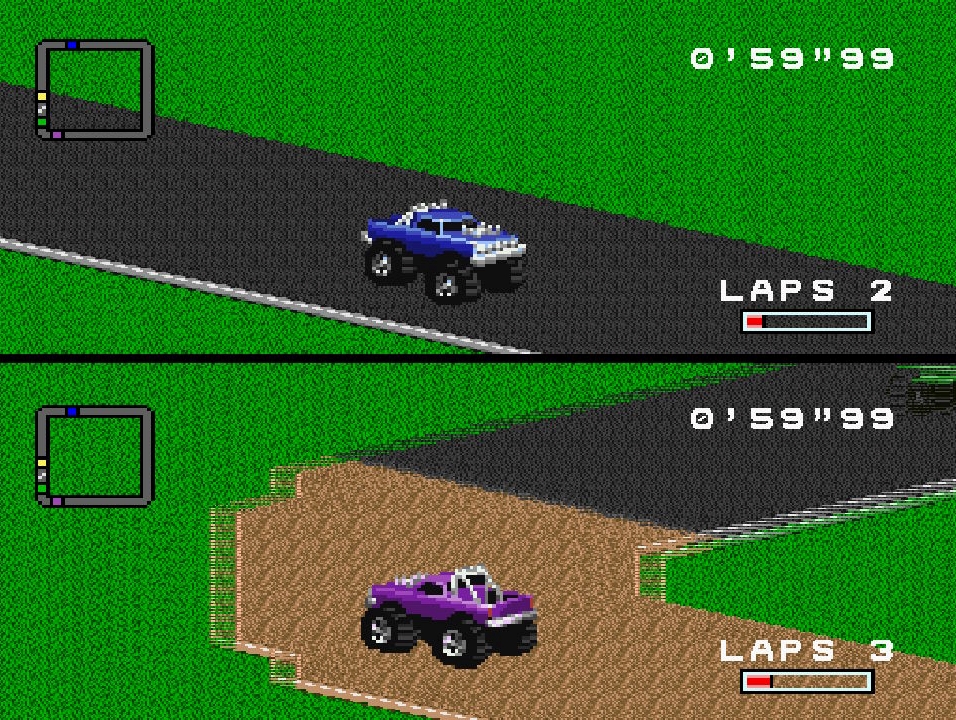 RPM Racing was the first video game made by Blizzard (original name: Silicon & Synapse), the company that makes World of Warcraft. It was so eclipsed by its sequel, Rock n' Roll Racing, that it's hardly remembered today.

The RPM in the title stands for Radical Psycho Machine, a suitably 90's name for a racing game, but what struck me most when I started playing was how slow the vehicles are. It takes them a while to get going, they never get very fast, and they lose a lot of speed with every collision. The second thing I noticed about the game is how barebones it is. The tracks are plain and unadorned, beyond the track is just green grass, and the background music is bland and unmemorable.

One annoying quirk is that RPM Racing is always in split screen, even when you're playing alone! The bottom half of your TV is wasted showing a computer car's movement. The game uses the SNES's Mode 5 graphics, which are supposed to be higher quality, but you would never know it from this plain-looking game. 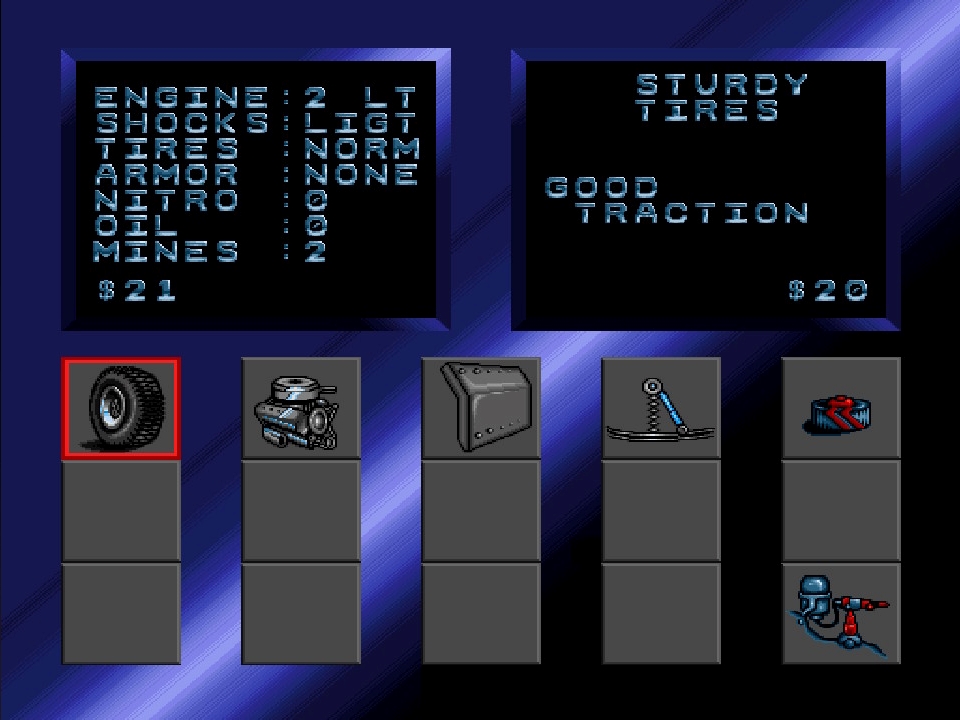 You earn money from finishing first or second and can spend it to upgrade your shocks, armor, tires, and engine. The upgrades are not very expensive, but you can't go to the second or third tiers of equipment until you reach certain levels. Eventually you can buy mines, shots of oil slick, and nitro blasts, but I found these unnecessary to win. It took me a few races to get a handle on the controls (especially holding R or L to take sharp turns), but after that it was easy. So I saved my money for the necessary upgrades and to pay the exorbitant entry and levelling costs. 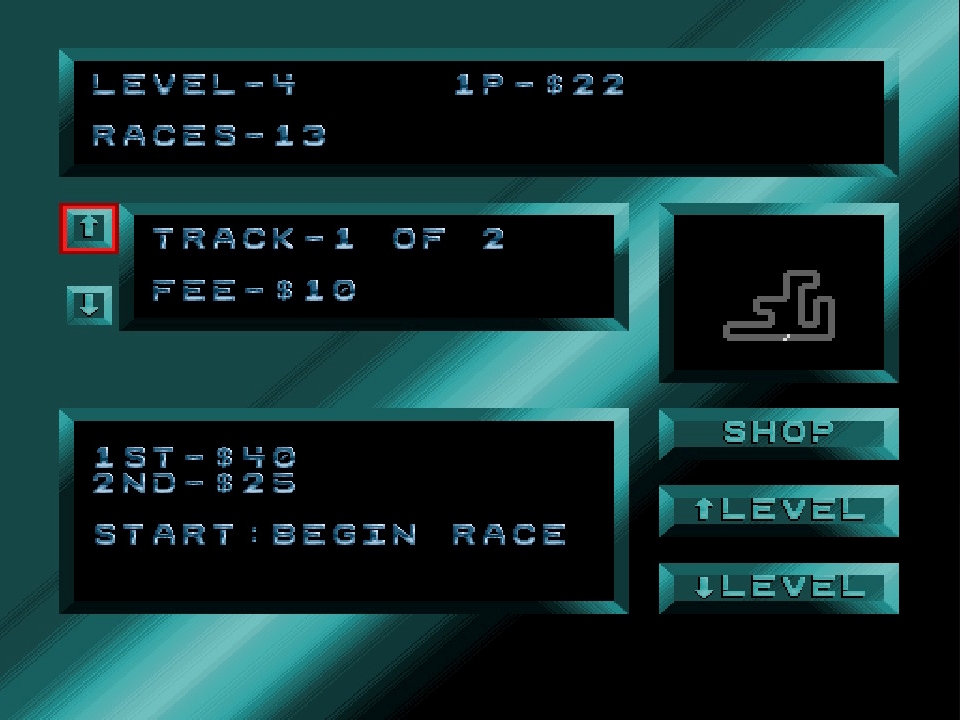 You see, RPM Racing uses a track system that may be unique in racing games. Instead of playing through pre-determined circuits, you get to choose which track you want to play every time. The catch is that they have escalating entry fees, so you have no choice but to work your way up slowly. Not only does each track have an entry fee, but the tracks are divided into 24 levels and moving up a level has an even heftier fee. In fact, it's possible to pay the fee and then lack the funds to enter any races on that level! If this happens, you have to go back down one or more levels until you find a track you can afford. If you're out of money, you'll have to return to level 1. Any fees you paid to level up are lost, and you must start all over from scratch!

This system is terrible. While the quasi-role-playing element sounds interesting in theory, in practice you have to keep replaying the same races repeatedly, grinding for cash. RPM Racing gives you the worst part of RPGs without the fun story or characters, of which this game has none. There is no story, no characters, nothing, just 128 same-y tracks.

The racing itself is as unremarkable as the sound and graphics. There are paved roads, dirt roads, and slippery ice. Your vehicle can't go off the track, but simply bumps against an invisible wall. If it gets hit too many times, it explodes and re-spawns, costing you a few seconds. You can keep playing new tracks as long as you like, but the gameplay never changes.

The game records your best time on each track, so in theory you could try to best your times as you replay levels for cash. It also has a level editor that can save six tracks, if that's your jam. After a couple hours with this game, I felt I had seen all it had to offer.

I was disappointed with RPM Racing. Perhaps my expectations were skewed by having played a lot of Rock n' Roll Racing as a kid. A better point of comparison for a very early SNES game may be R.C. Pro-Am on the NES. This game looks a lot like that one, only upgraded to 16 bits. But R.C. Pro-Am came out in 1988, was faster paced, and had better music. Plus, the SNES launched with an excellent racing game, F-Zero, with cars that moved blazingly fast. While that game had neither weapons nor upgrades, it is far better than RPM Racing. Because of the existence of Rock n' Roll Racing, there's no reason to play this today other than historical interest. 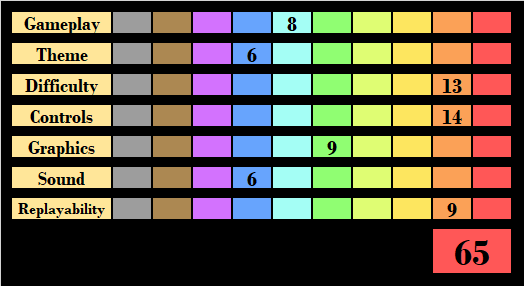 Grade: D
Linked Reviews
"Even with only four vehicles per race, the game runs fairly slowly, and the controls lack responsiveness. There's a forgettable sort of banality to the visuals."
— Daniel Greenberg, Ultimate Nintendo: Guide to the SNES Library, 2.5/5
"Weapon options like mines and oil slicks are painfully expensive. And again the racing itself just isn't fun."
— Jeremy Parish, Super NES Works 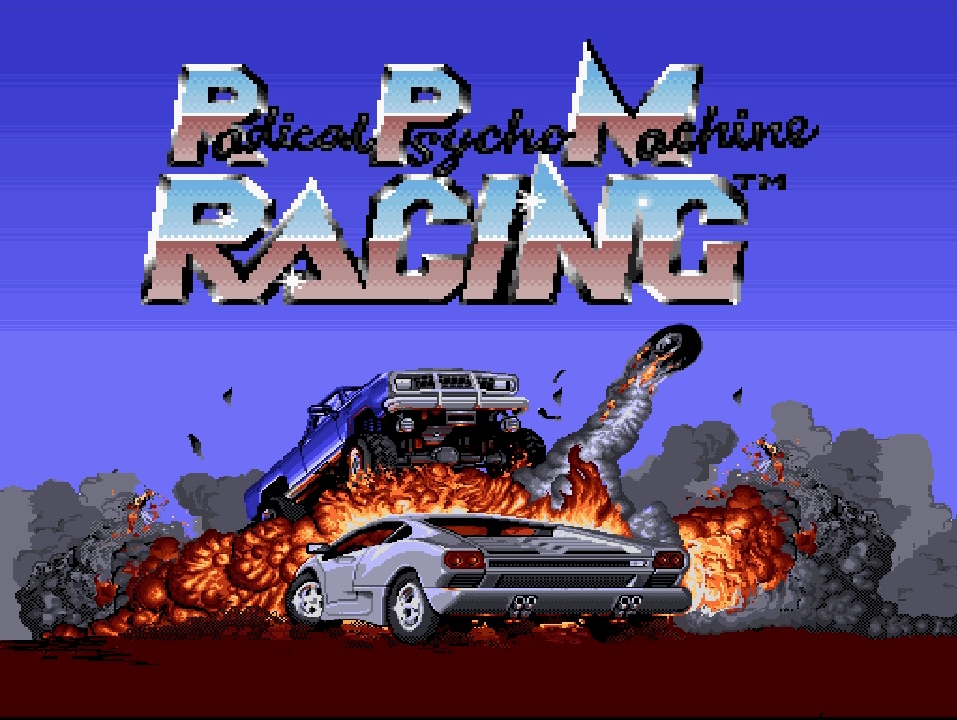