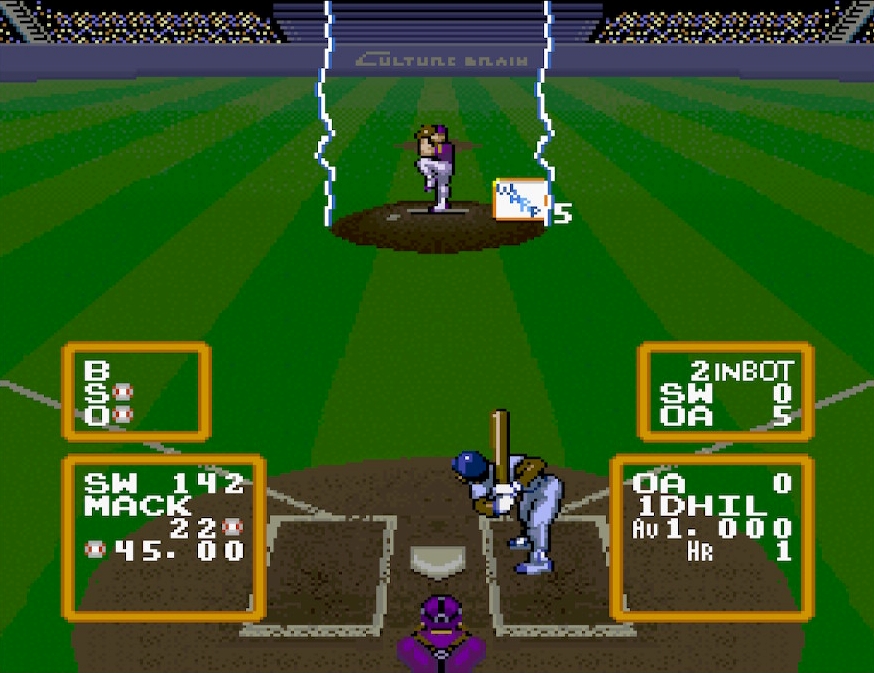 Super Baseball Simulator 1.000 is the Western version of what in Japan was called Super Ultra Baseball. The English title was poorly chosen, in that it suggests that the goal was an accurate simulation of baseball, whereas this game is centered on fantastical play in which players have supernatural "Ultra" abilities!

If you want real-life baseball, you can play without these abilities. Indeed, until I looked at the manual, I didn't realize the significance of the "Ultra" label on six of the teams. Prior to this discovery, I had been disappointed with Super Baseball Simulator 1.000. While its graphics and sounds were far superior to NES Baseball, the gameplay was only marginally better. The controlling of pitching, batting, running, catching, stealing bases, etc., is simple and intuitive.

But the game's heart and soul is the Ultra abilities, of which there are a wide range. Here is a representative sample: The Missile Hit turns the ball into a missile, the Tremor Hit causes an earthquake when the ball lands, Shadowless removes the ball's shadow (making it hard to catch), and Bomb Hit turns the ball into a bomb, which will explode a player who catches it. As for pitching, Iron Ball turns the ball into an iron shot put, Phantom Ball disappears then reappears, Fire Ball goes 150 MPH, and Floater Ball turns the ball into a falling leaf. When fielding, all players have the same four abilities: Super Slide, Rocket Jump, Super Catch, which lets you catch the various Ultra Balls without exploding or what-not, and Hyper Throw, which throws the ball directly to any baseman. These abilities are tied to specific buttons. When pitching and batting, you push X to cycle through your abilities, as represented by small icons. The manual decodes these icons for you. 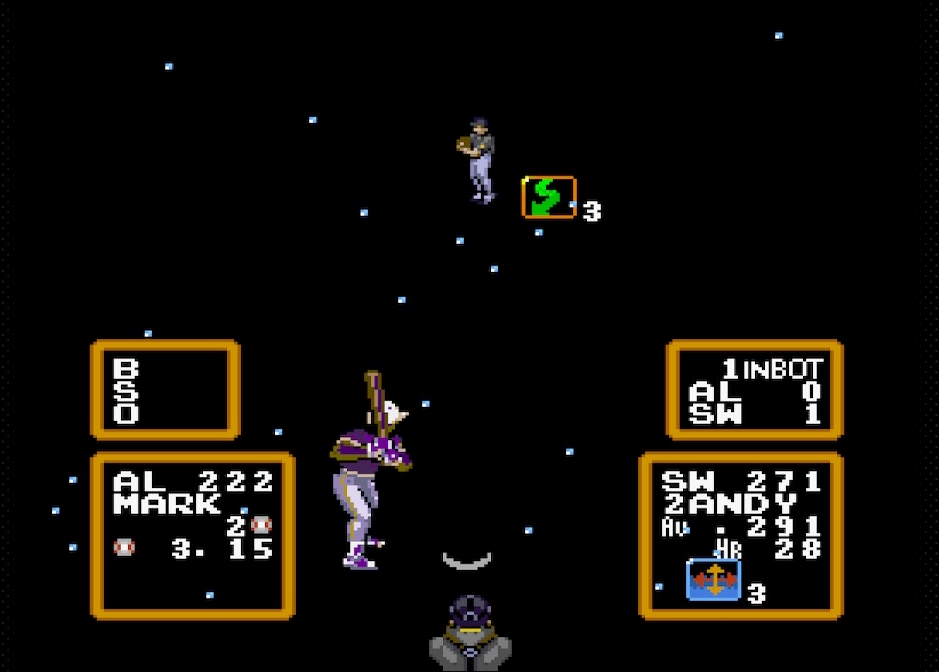 Each use of an ability costs a certain amount of points, and you can set how many points each team gets (it need not be equitable) or play with infinite points. Each player has access to no more than four abilities, so your selection of team and pitcher matters.

To its credit, the game boasts a robust team editor, which lets you distribute each player's statistics (like accuracy, power, speed, and stamina) as well as their Ultra abilities. You can even name the players. You name your team and choose its colors as well. You can save up to six custom teams this way.

Once you've made your own team (or chosen one of the eighteen pre-built teams, six of which have Ultra abilities), you can play an exhibition game or an entire season among six teams. For each team, you choose how many Ultra points it gets and whether it's controlled by a human being or the computer. You choose the number of innings per game (as few as one). You also choose which of several stadiums to play in, which determines the background music. You can even run a fully-automated season that skips the gameplay entirely, simply outputting statistics!

Surprisingly, the game includes a coaching mode, in which you are the coach, who gives signals to the computer-controlled players on your team! For example, press ↑ on the d-pad to tell the batter to bunt or → to instruct a runner to steal a base. It's hard for me to understand wanting to play this way, but more game options are never a bad thing!

I don't personally enjoy sports games, but the superpowers on offer here, the in-depth customization, and the various modes and options qualify Superball Baseball Simulator 1.000 as an adequate baseball simulator. On the other hand, if a person doesn't want superpowers in their national pasttime, it may disappoint, as the core gameplay is nothing special. Its main shortcoming to me is that it doesn't impress visually or aurally. Although it far surpasses the NES in these departments, it was superseded by later, superior SNES baseball games. 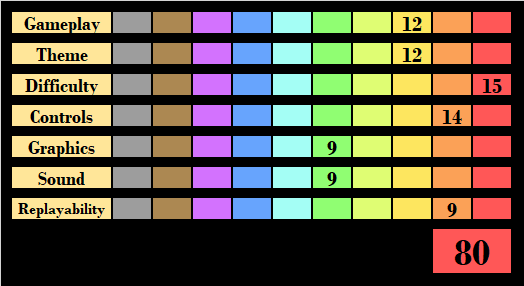 Linked Reviews
"The visuals and sound are strictly average, especially compared to games that came later in the generation. Still, its weirdness gives it an identity that makes it stand out among other more technically accomplished games."
— Kurt Kulata, Nintendo Life, 5/10

"While the graphics are an improvement over its NES counterpart, they lack the polish of other baseball titles that would be released for the 16-bit system."
— DG, Ultimate Nintendo: Guide to the SNES Library, 3.5/5

"You can set the game to unlimited Ultra Points and go hog-wild, which is easily the most entertaining way to play Super Baseball Simulator 1.000."
— Jeremy Parish, Super NES Works 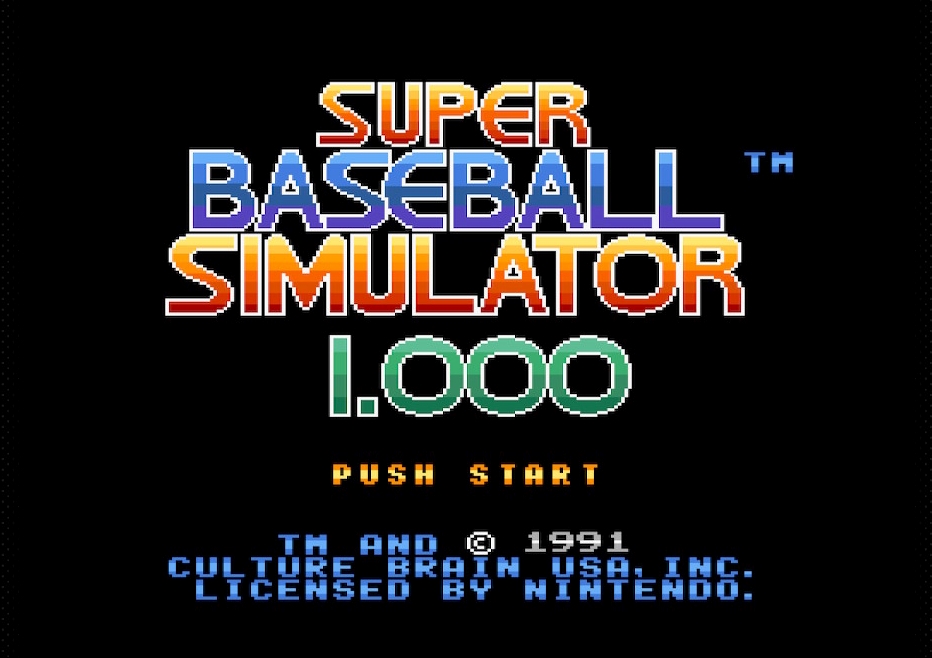