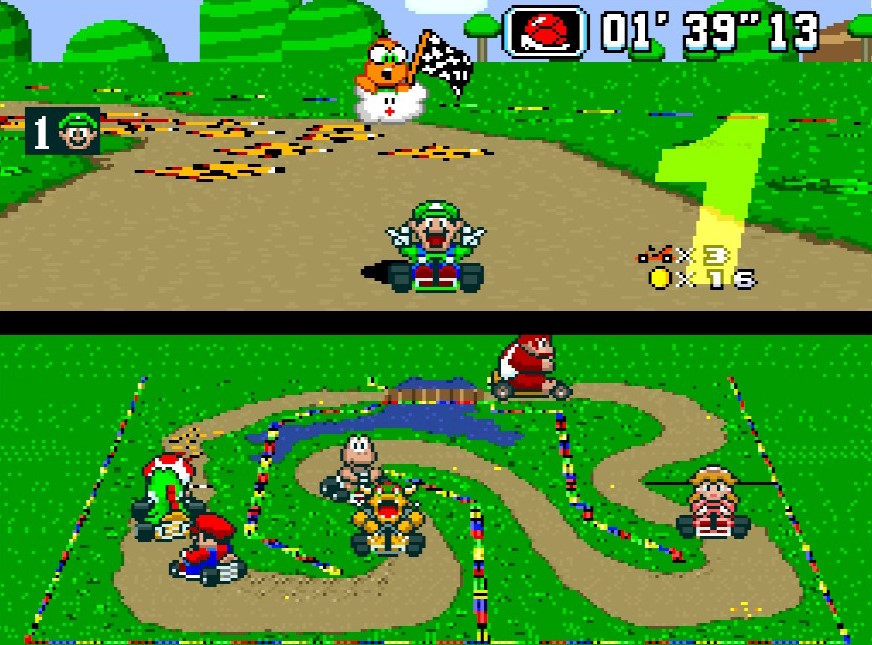 Boy does time fly: Super Mario Kart is 30 years old! This was one of my favorite SNES games when I was a child. Featuring eight Mario characters riding go karts, twenty fun tracks, an assortment of items and weapons, and two different multiplayer modes, Super Mario Kart is a top-tier video game.

Super Mario Kart laid down the basics of the popular franchise. You choose one of eight classic Mario characters (Mario, Luigi, Peach, Toad, Bowser, DK Junior, Koopa Troopa, or Yoshi), an engine speed (50 or 100 CC), then a circuit of five tracks (Mushroom, Fire Flower, or Star). Then you race! The characters belong to different weight classes: Junior and Bowser, being heavy, have the highest maximum speed but poor acceleration. New players should try a lightweight like Koopa Troopa or Toad.

Driving over question tiles on the track gives your racer an item, such as a turbo Super Mushroom, Super Star, banana peel, red Koopa shell, green Koopa shell, lightning bolt (which briefly shrinks everyone else), magic Feather (which lets you jump high), or coins. Coins, which are also found on the track, increase your maximum speed, but crashing into other players loses you coins. Try not to fall off the track or into water, because Lakitu takes a long time to fish you out, then charges you two coins for his trouble!

Everyone knows that the main appeal of Super Mario Kart is the items. Although the selection is limited in this first entry in the series, there are still enough to have a rip-roaring good time. For maximum pleasure, play with a friend, then destroy them with a red shell! Bragging rights go to anyone who assassinates someone with a well aimed green shell.

Super Mario Kart is a race (duh). Depending how you place in each race (with top four being required to pass), you may win the gold, silver, or bronze trophy at the end of the circuit. If you get the gold trophy for all three circuits in 100 CC, you unlock the Special circuit, which includes the legendary Rainbow Road! 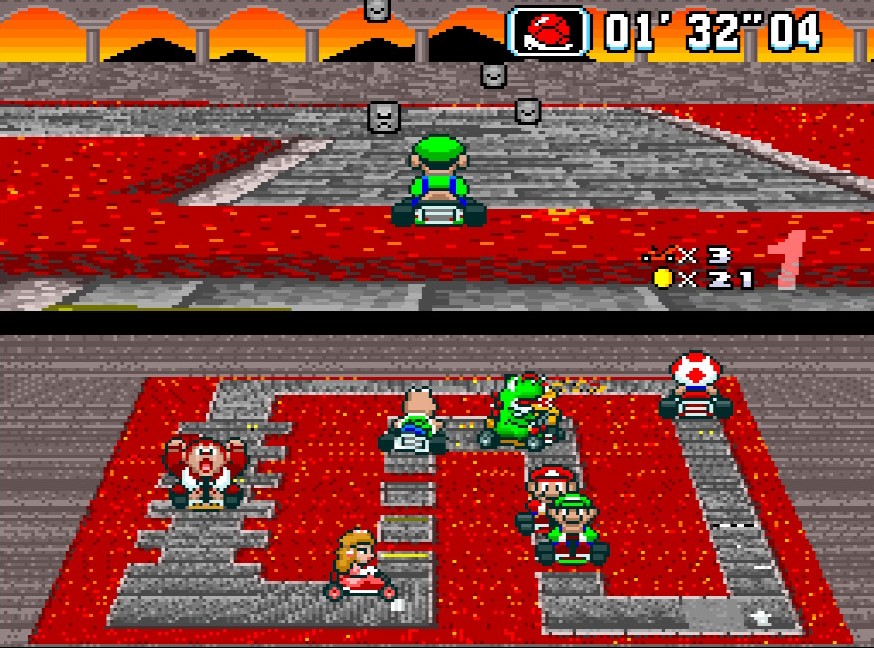 Getting gold in Special is no mean feat, but if you can manage it, you will be treated to the 150 CC engine speed. The enemy AI can be a bit frustrating even in 100 CC, as they tend to "cheat," but in 150 CC they let loose. You see, the computer racers don't pick up items like you do. Instead each character has their specific item they always can use. Mario and Luigi, for example, have unlimited Super Stars. In 150 CC, getting near Mario or Luigi will cause him to activate invincibility, which can be a problem if either of them is pre-programmed to be the best or second-best racer against your character!

Not only is the main game a hoot, Super Mario Kart also includes Time Trials for those who want to hone their skills on individual tracks. The game saves not only your time, but the exact route you took, so that you can race against a ghost version of the fastest time!

The most important extra mode, however, is battle mode. Here racing is replaced with a battle: each kart comes equipped with three balloons. Every time you are hit with a weapon, a balloon pops. Once you're out, the other player wins. Battle mode features four arenas in which to fight. 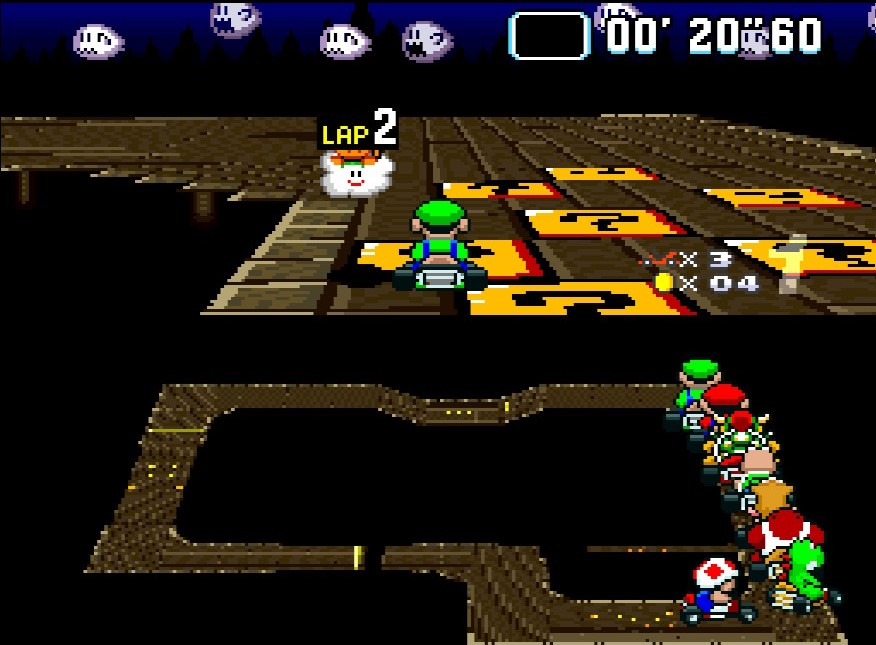 I was shocked to learn recently that some people don't look back that fondly on the original Super Mario Kart, instead preferring Mario Kart 64. As it turns out, those people are sort of right. I didn't get to play Mario Kart 64 much as a teenager (though when I did, I loved it), which may explain why I failed to appreciate what an enormous leap forward it was for the series. The original Super Mario Kart — great as it is — can't compare. The main problem with the original is that, notwithstanding the character sprites, the game is entirely 2D. Everything looks incredibly flat and unappealing compared to any other Mario Kart game. The second problem is the controls. The turning in Super Mario Kart is weird, as the karts skid excessively. It's hard to get the hang of it; the later games are more user friendly.

"Kart took racing through the jungle and off a cliff, imbuing players with power-ups and all sorts of crazy antics, including a highly addictive multiplayer mode."
— IGN, #8 of Top 100

"Though simple, this celebrated start to a great series wins the gold for fun."
— Asheton Phinney, Ultimate Nintendo: Guide to the SNES Library, 4.5/5 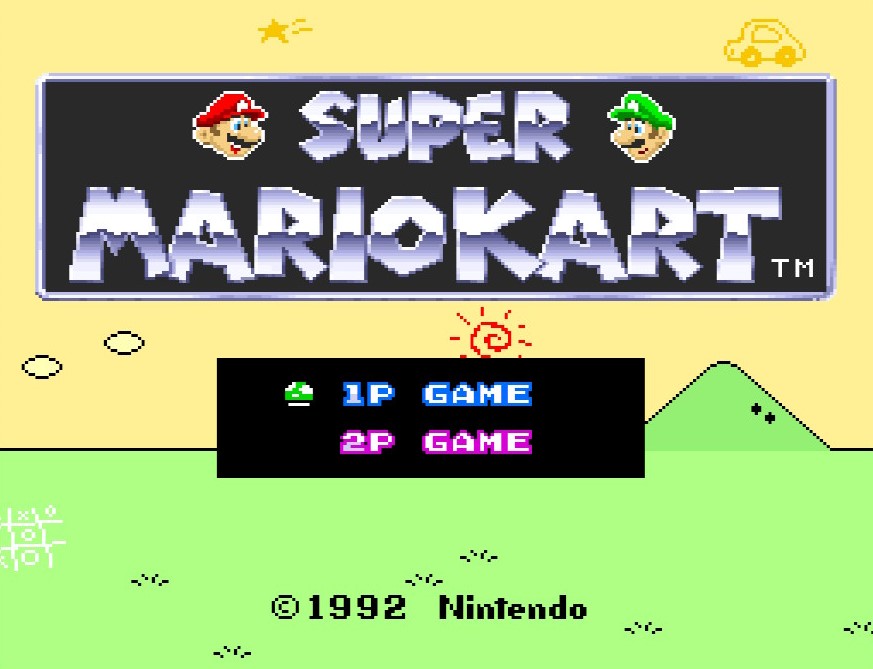