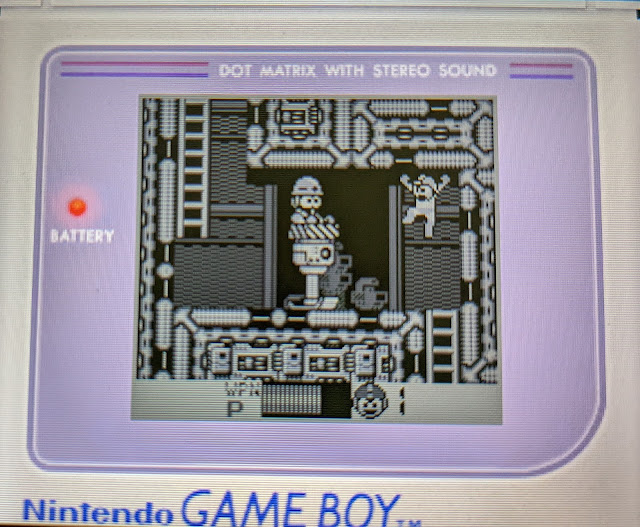 Another day, another 30th anniversary for a Nintendo classic! Today's entry is Mega Man III. No, not Mega Man 3 with an Arabic numeral: Mega Man III with a Roman numeral! Why they chose such a confusing naming scheme, I have no idea. It was called Rockman World 3 in Japan. With all the other "Land" games on Game Boy, Capcom should have titled the series Mega Man Land.

I've heard that the first two Mega Man games on Game Boy were not good, but Mega Man III is very good. It feels exactly like an NES Mega Man game, only in monochrome and on a smaller screen (the Game Boy is 160 by 144 pixels compared to the NES's 256 by 240). The music is fantastic as always for the series, the sprites are the same ones from the NES games, and the gameplay feels exactly the same: tight and compelling platforming action.

Each Game Boy Mega Man games reused four levels from the most recent NES outing and four from the previous one, in this case 4 and 3. Mega Man II on the Game Boy took Magnet Man, Hard Man, Top Man, and Needle Man from Mega Man 3, which left Snake Man, Gemini Man, Shadow Man, and Spark Man for this game. From Mega Man 4, it draws Drill Man, Dust Man, Skull Man, and Dive Man. Their stages have been altered from their NES counterparts, in part due to the smaller screen but also for variety. One notable omission from this handheld version is the fight with Proto Man in Shadow Man's stage. Even if you've already played Mega Man 3 and 4, you can have fun with this game.

There are a total of eleven stages. After beating the four Mega Man 3 robot masters, our Blue Bomber faces an intermediate stage, then it's on to the stages from Mega Man 4. Once he has defeated those four, he enters Dr. Wily's Castle, which consists of two stages. The first one ends with a fight against this game's only new robot master, Punk. He hurls projectiles and them himself at Mega Man at an unpredictable altitude, so you need quick reflexes. If Mega Man slides when he needs to jump or vice versa, he gets hit.

After the fight, Mega Man obtains the Screw Crusher. This weapon uses very little energy with each shot and shoots in an upward arc, which is useful in certain situations. Of course, at this point there's only one stage left in the game, so you won't get to use it much. That's probably why the designers made the Screw Crusher the only weapon that can damage Dr. Wily's final form! 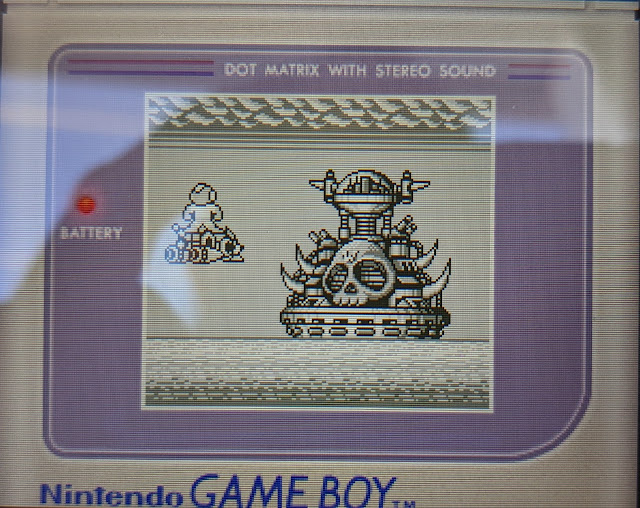 Mega Man III features a robot's best friend, Rush, with the Rush Coil and Rush Jet abilities (sorry, no Rush Marine in this one). Mega Man retains his ability to slide (press ↓ and A) introduced from Mega Man 3. He can also charge up his shot (hold B) to increase its power, as in Mega Man 4. I am one of those old-school Mega Man fans who thinks the series jumped the shark when they gave him the chargeable shot. (That's right, Mega Man jumped the shark after 1991!) The Mega Buster was already a strong, versatile weapon. Once he could charge it up, there was even less reason to equip other weapons. I've always felt a weakness of the series is that it's simpler to use the Mega Buster all the time, equipping the other weapons only to exploit each boss's weakness.

Mega Man III has three shortcomings. The first is the small screen and monochrome color, both inherent to the hardware. In just a few places, the small screen leads to some tight jumps where Mega Man can hit his head on the ceiling and fall to his doom, which is annoying.

The second imperfection is the high difficulty. Having some difficult sections isn't really the problem: it's how much of each level you have to replay every time you die. There are many challenging sections of the game (though none of the frustrating platforming of the original Mega Man). Anyone who is not an expert is going to die a lot. All Mega Man games are like this to an extent: it's a case of "practice makes perfect." The enemy patterns and level layouts don't change, so each time you play through a section, you get better. The problem is that each stage has only two checkpoints, one at the halfway point and the other outside the robot master's chamber. This means that every time you lose a life, you have to replay as much as half a level. While this gives you the opportunity to refine your skills, it gets tedious. If you aren't motivated to finish, you may move on to another game. The problem would be solved if Mega Man always restarted on the same segment on which he died and had a lot more than two extra lives (or unlimited lives). This is why save states are a thing when playing old games like this. 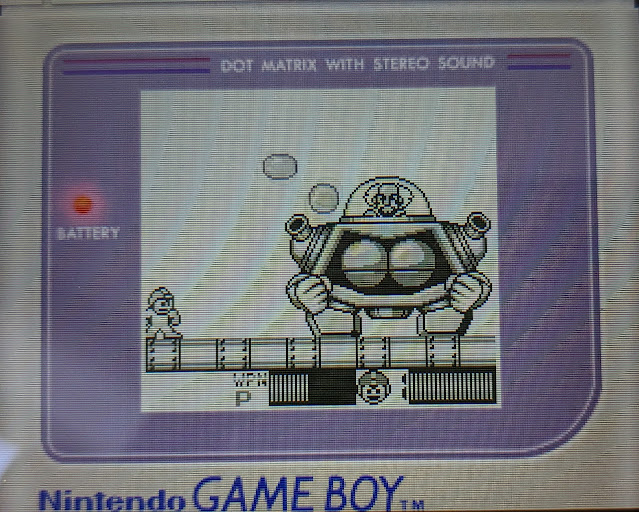 My third criticism, ironically, is that the final fight with Dr. Wily is too easy! In his first form, you can just stand at the far left of the screen, jumping and shooting Wily's big-eyed vehicle with the fully charged Mega Buster. A single projectile of his may hit you each time, but you need only jump up and shoot it. His second and final form doesn't even move. You do risk getting hit each time you get close enough to use the Screw Crusher, but I beat it on my first try. It's disappointing to have such an easy final boss after a difficult game. On the other hand, the Dr. Wily fights have never been the hardest part of the series. And I was sick of replaying the final stage anyway.

Mega Man III comes as close to the quality of the NES games as is possible given the limitations of the Game Boy. I strongly recommend it to any Game Boy or Mega Man fans.