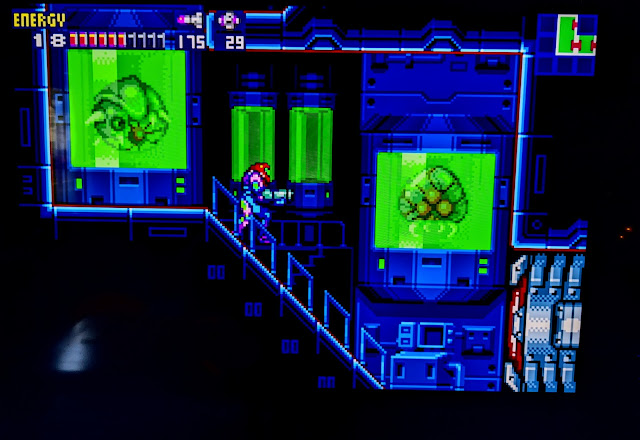 Metroid Fusion is a great sequel to a beloved classic, and after twenty years it now can justly be called a classic in its own right! After eight years, a sequel to Super Metroid, one of the greatest video games of all time, was worth the wait.

Unlike previous Metroid games, Metroid Fusion contains many cutscenes and messages (and even some inner thoughts of Samus) that spell out a detailed plot. Samus Aran has returned to the Metroid homeworld, SR-388 (where Metroid II: Return of Samus took place). There she is attacked by a dangerous parasite, dubbed X, which damages her cybernetic Power Suit. Her life is saved thanks to a vaccine made from the baby Metroid (also from II). But then a mysterious explosion rocks the space station, and Samus must investigate...

The X parasites are the game's central villain. They can mimic any living being they come in contact with. The space station is like a menagerie, but the X parasites run amok and begin duplicating everything. Because of the Metroid DNA injected into Samus, she is immune to them and can even absorb them after destroying the host creature. Unlike previous games, which do not explain why Samus has to collect all her abilities again, in Fusion this is central to the plot. Due to the attack, Samus lost everything, but she can get it all back by absorbing various X parasites. The normal parasites restore her health and ammunition, whereas the bosses give her back her abilities. The big bad of the game is a parasite called the SA-X, which has mimicked Samus herself, including all her technology! It stalks her throughout the game, and she must hide or run from it or be killed immediately. The use of the X parasites is a great fusion of story-telling and game mechanics!

Metroid Fusion has twelve boss fights. Each is a creature taken over and made more deadly by an X parasite. You even get to take on Ridley again! They're all fun and different, though some can be tricky. I died more than a few times. Fortunately, both save stations and recharge stations are abundant in the game, so it never feels too bad when you have to try again. The game's final boss is a bit of a twist, as--Spoiler Alert!--the SA-X helps Samus defeat an Omega Metroid. 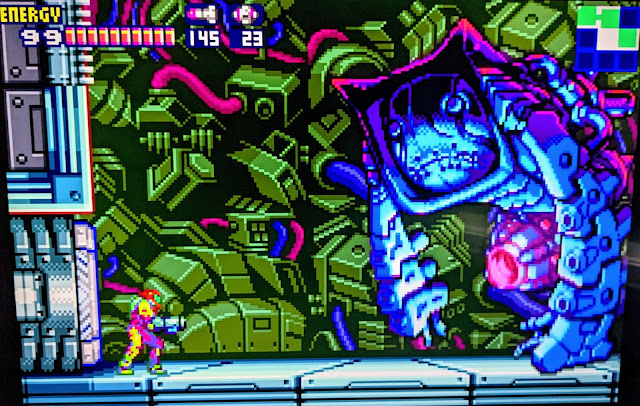 Metroid Fusion is unusually linear for a Metroid game. Instead of wandering about more or less freely, in Fusion Samus is constantly directed to the next location by an intelligent computer named Adam. Your exact destination is often marked on the map, and other areas are inaccessible. As a result, the game does not play the same as Metroid and Super Metroid. The upside of the linearity is that it lets the game have an extensive and engaging plot. There's a mystery element to the story, as it becomes clear things are not as they seem.

Despite the direction from Adam, the core gameplay of Metroid remains the same as always. Samus explores different areas of the station, fighting enemies, gaining abilities, and using those abilities to discover new areas. The space station is divided into seven sectors. Elevators connect the main deck to six sectors. Each has a unique habitat with different enemies, appearances, and layouts. For example, sector 3 (PYR) is very hot, and sector 4 (AQA) is underwater. (For you etymology buffs, pyr is the Greek word for fire, and aqua is the Latin word for water.) Sometimes Samus must revisit a sector, where things have changed and new areas can now be accessed.

I love the Metroid series because it is fun to slowly power up Samus. I get a dopamine rush each time I gain an item, even if it's just some missiles. The game keeps things fresh and exciting by frequently giving you new abilities. By the end of the game Samus feels overpowered in a good way. It's a joy to revisit earlier areas, tearing through enemies and finding the last secrets.

All the main power-ups from the previous games return, beginning with the Morph Ball and ending in the Screw Attack that turns her every jump into a powerful attack. Samus is famous for her inexplicable ability to roll up into a ball (press ↓ twice), allowing her to move through tight spaces. Many of the game's secrets and puzzles depend upon use of the Morph Ball. 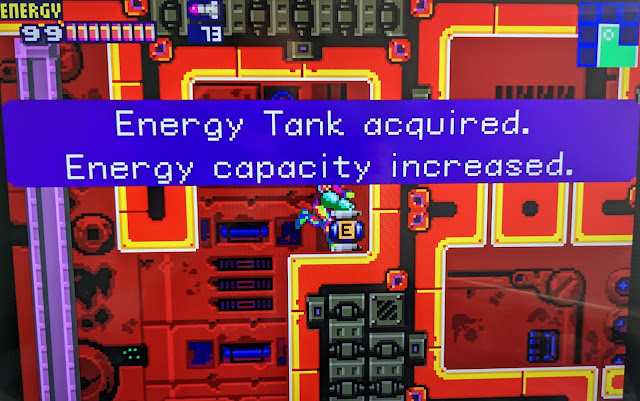 There are several weapon upgrades: the Charge Beam, Wide Beam (which replaces the Spazer Beam of the earlier games), Plasma Beam, and finally the Ice Beam. A new item for this game is the Ice Missiles. These also get a Diffusion upgrade late in the game, which gives the missiles a large blast radius. Samus also upgrades her Power Suit twice, with the familiar Varia suit that protects her from extreme heat and cold, and the Gravity Suit, which lets her jump fully even while underwater. Finally, there is the Speed Booster, which lets Samus charge and jump through speed blocks, provided she has enough space to build up momentum. The speed charge can be stored for a few seconds by pressing ↓. This allows Samus to unleash it in any direction by jumping and pressing the d-pad. This technique is called Shinesparking, and many of the game's best kept secrets can be found only by using it.

There are 100 items to find in Metroid Fusion: energy tanks, missiles, and power bombs. (Unlike Super Metroid there are no super missiles.) Most are easily obtained, though some are deviously hidden. There's no X-Ray Scope like in Super Metroid to scan for breakable blocks. I personally use a guide to help me find secrets after I've beat the game, because just wandering around everywhere dropping power bombs is kind of boring. Maybe I'm just not hardcore enough! A convenient new feature is that, once you've beat the game, the map screen (press START) displays how many of each item type you've collected in that sector as well as the total.

Metroid Fusion uses the lurid coloring of the Game Boy Advance, which was used to compensate for the handheld's lack of a backlight. It's still a good-looking 16-bit game. The bright colors make it look like a comic book. The music doesn't blow me away (and the GBA has inferior sound compared to the SNES), but it's good and fits with the eerie "Alien" feel of the series. It may not surpass Super Metroid, but it's a worthy sequel with plenty of new elements. It also advances the Metroid plotline, which was finally picked up this year in the long overdue Metroid Dread!