Metroid II: Return of Samus: The hunt for flying jellyfish 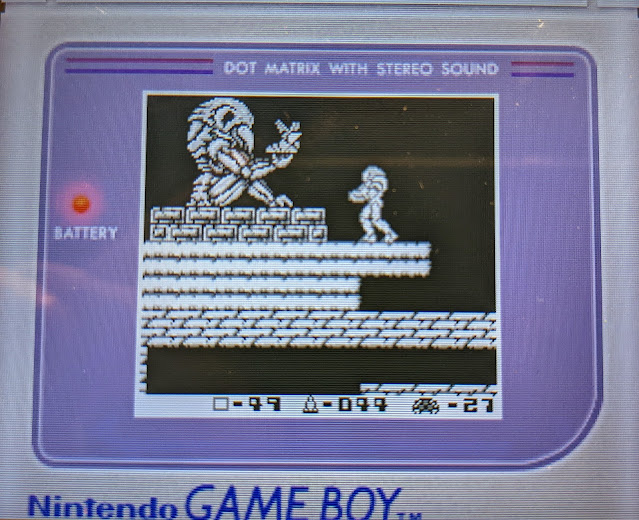 The second entry in the Metroid series arrived on the Game Boy at the end of 1991. It offers a more linear experience than the original, as Samus moves deeper and deeper into the cavernous SR-388 hunting Metroids. Although not as compelling as the original (let alone Super Metroid), Metroid II is a strong entry for the Game Boy.

The plot of Metroid II is that Samus has been tasked with exterminating every last Metroid on their home planet of SR-388. A tracker at the bottom of the screen displays how many remain, beginning at 39. Periodically, after she has slain a certain quota, the screen rumbles as if there were an earthquake. Each time this happens a new downward path opens where there used to be lava. There are ten underground areas, plus the planet's surface where Samus's ship has landed.

The basic Metroids, called Alphas, are easy to destroy with missiles. These are not the same Metroids from the original. Apparently the classic Metroid is a larval form! Metroids metamorphose into a form with a shell and crab-like claws. As Samus goes deeper into SR-388, she faces Gamma, Zeta, and finally Omega Metroids. Each is a little tougher than the previous form. The Omega Metroids look almost humanoid and take 30 missiles to bring down!

The final boss is the Metroid Queen. She's a worthy adversary for Samus. She tries to bite Samus with an extendable neck and shoots projectiles from her mouth. Samus can stun her and then unload missiles into her open maw. With the Morph Ball she can even roll into her belly through her throat and bomb her from the inside! The battle is somewhat difficult. Samus can retreat through a hole in the ground, allowing her to recharge and try anew. The battle is a strong ending for the game. Anyone who has played Super Metroid knows what happens after the battle: a Metroid hatches from an egg, then bonds with Samus, who fatefully spares its life.

A downside of Metroid II is that many areas look very similar, in large part due to the Game Boy's small monochrome screen. As a result, the hunt for Metroids can grow confusing and even tedious. A discarded Metroid husk appears near each location to alert you to its presence, but there are so many of them that it can become hard to tell where you may have missed one.

All the abilities of the original game reappear: bombs, energy tanks, missiles, High Jump Boots, Ice Beam, Wave Beam, Varia Suit, Space Jump, and Screw Attack. Four new items appear as well: Spider Ball, Spring Ball, Plasma Beam, and Spazer Beam. The Spring Ball lets Samus jump while in Morph Ball form, which is convenient. The Spider Ball (engaged and disengaged by pressing ↓) causes the Morph Ball to cling to the surface it's on. This allows Samus to climb walls or even the ceiling. This is an unusual ability that (I just learned) appears in the Metroid Prime games. Another oddity is that Samus moves slowly before she acquires the High Jump Boots.

The Plasma Beam is a more powerful attack than Samus's regular beam, whereas the Spazer Beam fires a triple spread shot. As in the original, Samus can equip only one at a time. If you want to change it back, you have to go back and pick it up again. Near the end of the game, a section appears where all the weapons are next to each other.

After tracking down and destroying all 39 Metroids, the counter resets to ten. Samus needs to seek and destroy ten of the classic, larval Metroids. This of course requires the Ice Beam, and happily the game provides one, so you don't need to backtrack. Two enormous improvements over the first Metroid are save stations and recharge stations. No more do you need to bother with passwords (Justin Bailey, anyone?). The recharge stations are a godsend, eliminating the need to grind health drops. Most unfortunately, there is still no in-game map.

The game looks good for a Game Boy game. Samus's sprite is much improved from the NES game. She and her ship look like they will in Super Metroid. However, the monochrome graphics and small screen hold the game back, because they make it harder to distinguish different areas of the vast map.

The game's music is excellent. Unfortunately, in many sections, no music plays; instead there are eerie, otherworldly beeping noises. The Game Boy hardware can't really pull the effect off, though. I think it would be better if it always played music.

Metroid II wasn't a step forward for the series. A linear hunt for Metroids did not prove to be a winning formula, and Super Metroid went back to the original for its inspiration. Still, considered by the standards of 1991, Metroid II is a lot of fun. The main appeal, as always, is slowly upgrading Samus until she becomes a death-dealing, flying, spinning powerhouse.

It didn't take me too long to get hooked on Metroid II. I recommend the game to fans of NES Metroid. People who have only played Super Metroid and later titles would be better off with the 3DS remake Metroid: Samus Returns. That game completely reinvents and expands Metroid II in the modern Metroid conventions (tons of secrets, backtracking, and so on). It's not so much a remake as a new game. From the point of view of the modern Metroid storyline, it's the canonical entry, with Metroid II a kind of apocryphal relic.

Linked Reviews
"Although nowhere near the 2D masterpiece that is Super Metroid, Metroid II has held up better than the original game and as such is still very much worth playing."
— Marcel van Duyn, Nintendo Life, 7/10 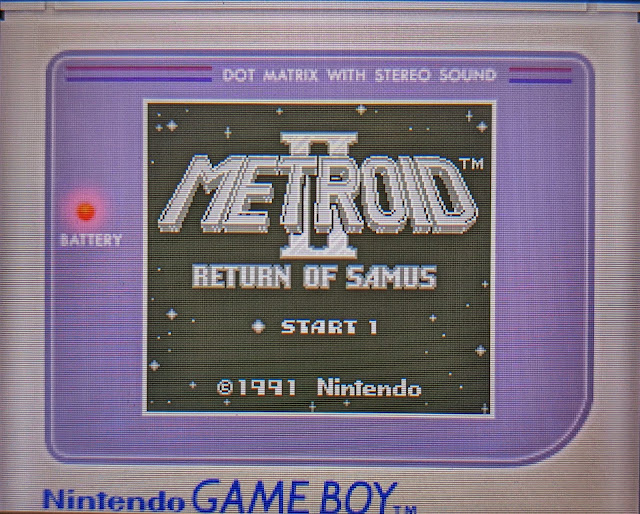