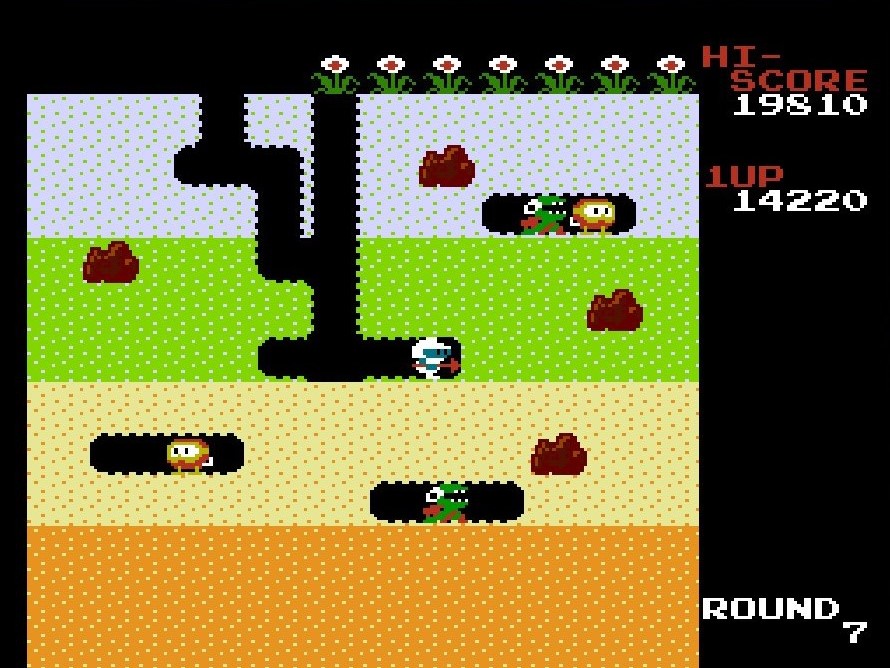 Now here's a famous one! I played Dig Dug in an arcade in the 2000's, and I'm sure there are still more than a few out there, bringing in the occasional quarter. You can even pick up a modern Dig Dug + Dig Dug II "counter-cade" (arcade machine that sits on your counter) for about $150!

Dig Dug debuted in 1982, and Japan got a Famicom port in 1985. Like other early Namco games (save Pac-Man), it was passed over in the States in favor of its sequel. In hindsight, this was a mistake, as Dig Dug is far more popular.

Dig Dug's charm comes from its quirkiness. You control a little guy who digs rapidly through the ground, searching for fire-breathing dragons (called Fygars) and goggle-wearing Pookas to inflate with a pump until they pop like balloons! You can also undermine rocks so that they fall onto enemies (or yourself, if you're not quick!). There are twelve similar levels, which loop continuously. The world record was set by Donald Hayes in 2017, when he scored 5,147,610 points.

As far as ports go, this one is quite faithful. They did have to decrease the size of the stages to accommodate the 4:3 aspect ratio of TVs. Instead of fifteen layers of dirt, there are only twelve. As a result, the Famicom version looks "zoomed in" compared to the original.

It's hard to review ports of arcade games. If I saw Dig Dug in an arcade today, I wouldn't hesitate to waste some quarters on it. Games like this were made to be played for a few minutes at a time. But even as a kid, I found it strange playing Donkey Kong or Mario Bros. on the NES. A game like Super Mario Bros. you can play for hours, and some later games last much longer. A one-screen arcade game, in contrast, is interesting for maybe fifteen minutes, thirty tops (unless you're a high-score chaser, and that just feels like work).

Gameplay: Fun, but perhaps not for everyone (16/20)
Theme: Compelling, well designed concept and characters (20/20)
Controls: Controls are smooth and let you do what you want (15/15)
Difficulty: Little challenge (unless you're a high-score chaser) (12/15)
Graphics: Beautiful, well designed graphics (15/15)
Sound: Music is repetitive (9/15) 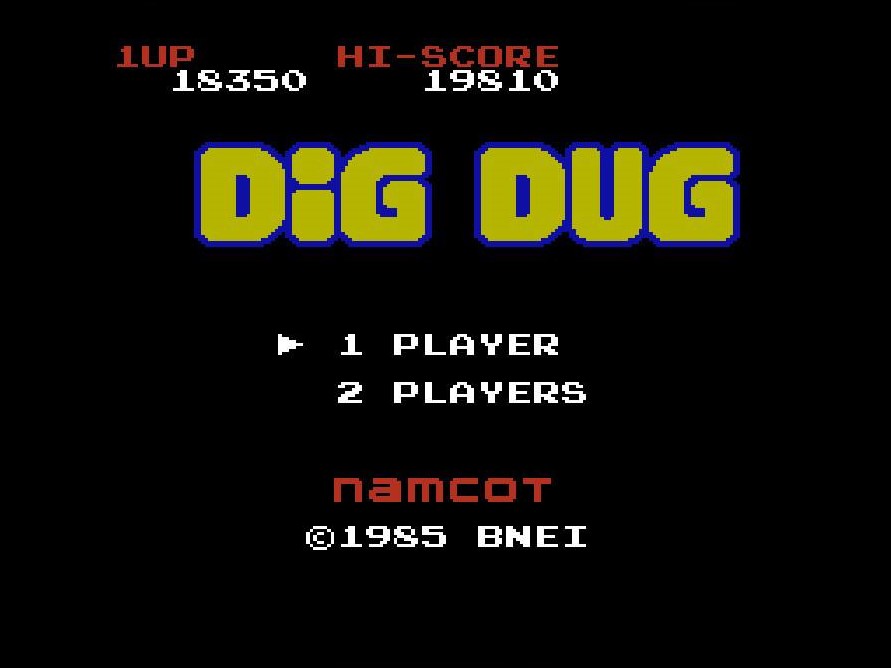 Linked Review
"This is a decent port of Dig Dug, providing plenty of entertainment as players chase after a high score. It's also a lot of fun: apart from this (and Mortal Kombat 3) how many games have you inflating your enemies with an air-pump until they burst?"
— Dave Frear, Nintendo Life, 6/10
Stats
Developer: Namco
Publisher: Namco
Genre: Maze
Arcade release date: April 1982
Famicom release date: June 1985
Extend: 10,000
My high score: 26,640