Tower of Druaga: Tower of rage 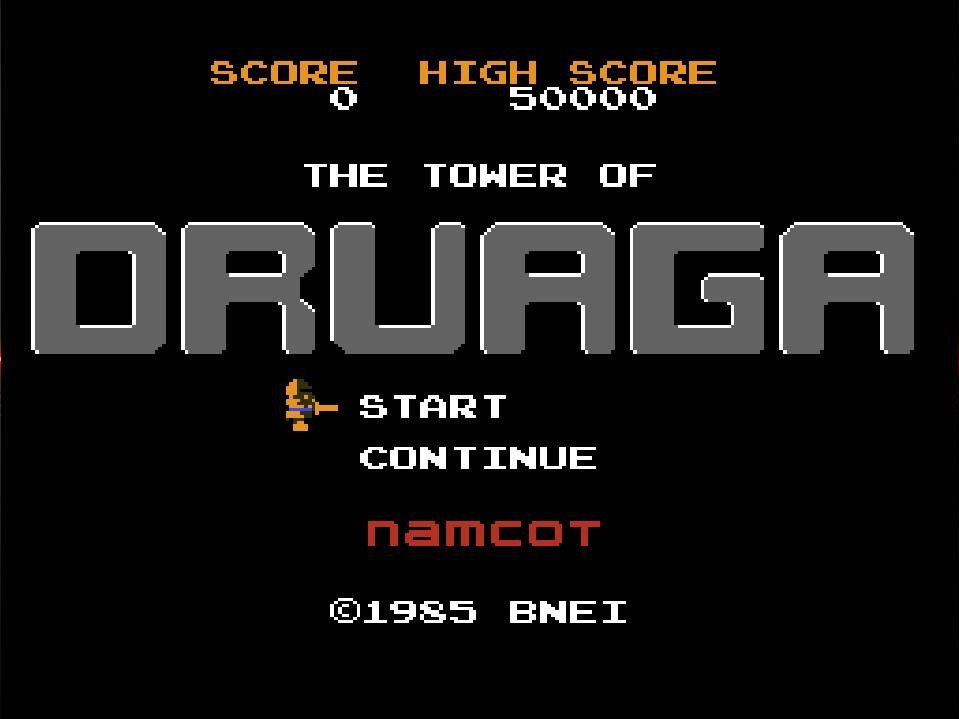 Being an RPG fan, I tried hard to like The Tower of Druaga. A hit in Japanese arcades, it flopped in the U.S. and thus never got an NES version of the Famicom port. I can understand why: playing this game is an exercise in repetitive frustration.

The Tower of Druaga is what you get when you turn Pac-Man into an RPG dungeon-crawler. There are sixty mazes through which you must navigate the mythical hero Gilgamesh while slaying or avoiding enemies. Each stage has a locked exit and a key. Gil can kill enemies with his sword by holding A, but when doing so he puts to one side his shield, which normally protects his front from the projectiles of Magicians and Ghosts. Unlike later RPGs, there are no experience or hit points, so it's a steady stream of one-hit kills. I can only imagine how many 100-yen coins this game devoured.

As with Mappy and Dig Dug, the switch to a horizontal aspect ratio required the Famicom port of The Tower of Druaga to decrease the height of the levels. Whereas the original mazes have nine rows, the Famicom port has only seven. The sprites are also less colorful; Gil looks like a bronze statue. Still, the Famicom port is adequate.

This may sound like a good, albeit primitive, game, but the treasure system makes it infuriating. Every maze contains a hidden treasure, such as a potion. Equipment (e.g., swords) must be collected in succession, and only when you collect the final one does it actually do anything! If you miss one, all future ones become unobtainable! This is a terribly un-fun system. It might have worked if the treasure chests were just sitting there, ripe for the taking. Instead, each level's chest appears after the completion of an unknown, arbitrary action, such as touching the left and right outer walls, blocking three projectiles, or pressing START. There are no hints or clues as to what these actions are (except on the Switch port of the arcade game, which includes a hint button). Oh, and did I mention that there's a timer that runs down? Take too long and a Will-'o-the-wisp begins hunting you down.

The idea was that players would crowd-source this, sharing the secrets they had discovered through trial and error. The fighting games of the 90's used this system successfully, as players had to figure out how to perform special moves like the Hadouken. But there's a key difference: in fighting games, each player has a handful of moves, they all use the same basic button-and-joystick combinations, and you don't need any given move to win. In The Tower of Druaga, there are almost sixty hidden tasks, several of which are needed to win.

To beat The Tower of Druaga, you must collect the Green Crystal Rod on level 38 by blocking a projectile from the side while holding your sword out. Then collect the Red Crystal Rod on level 48 by walking through all four corners. Then collect the Blue Crystal Rod on level 58 by walking through three unmarked spots in the correct order. If you do this, the final boss (Druaga) will appear on level 59. Otherwise, he never appears and you'll be taken to a lower level when you exit. Finally, after beating Druaga, on the final level you must place the three rods on their respective spots and save both women, all in the correct order. If you don't, you are teleported to a lower level. I wonder how many people ever beat it in an arcade, and how much time and money it took.

I fancied I could beat this game using a guide, but level 17 broke me. My first attempt, the treasure appeared almost immediately for no apparent reason. But I died. On future attempts, it did not immediately appear. It appears only after a Ghost Mage teleports five times, which they do when Gil is opposite a wall. This sounds easy enough, but a Druid keeps blasting away all the walls. I tried for nearly an hour to get the treasure to appear, but either I would get hit or so many walls would be removed that the Ghost Mages stopped teleporting. Finally, I shook my head and turned the game off.

I console myself that this was not my fault. Without hints or clues, these "puzzles" are like a forced twist or reveal in a story that no reader or viewer could ever guess. It's a cheap rip-off of mystery and suspense. If you want to solve puzzles in a dungeon on the NES, for the love of God, play The Legend of Zelda instead (a game clearly inspired by this; its Wizzrobes are straight-up copies of this game's Mages). Though perhaps an innovative idea in 1984, this game is fundamentally broken.