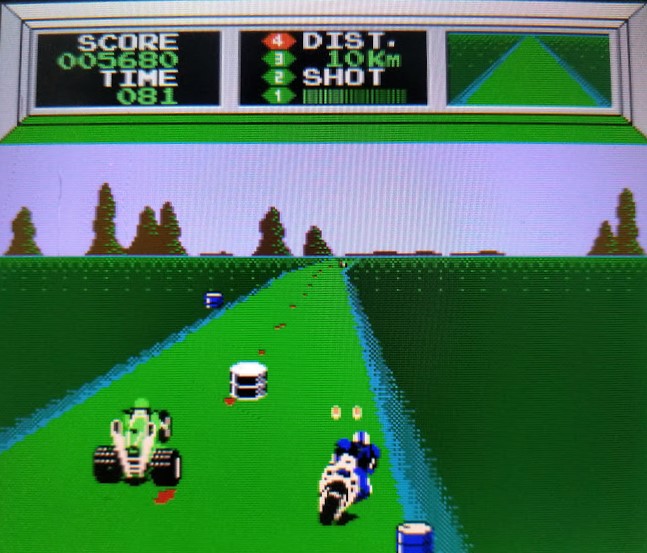 Mach Rider is another NES game I'd never heard of before beginning this retro quest. It's a post-apocalyptic motorcycle game that was clearly inspired by the Mad Max movies. You ride your bike along desolate highways with ruined cityscapes, shooting at alien invaders in vehicles called Quadrunners.

The game is challenging because of the Quadrunners, especially when they come up from behind and ram into the Mach Rider, smashing him to pieces. Weirdly, he re-assembles after being destroyed, which is part of the futuristic storyline. Most video games don't bother to explain how you have multiple lives, so it's kind of neat. After the starter course, you only get three lives but earn a bonus life after every third course. Fortunately, the game includes a "Solo Course" that lets you practice courses without any Quadrunners. You can play this way to get used to the controls and courses. 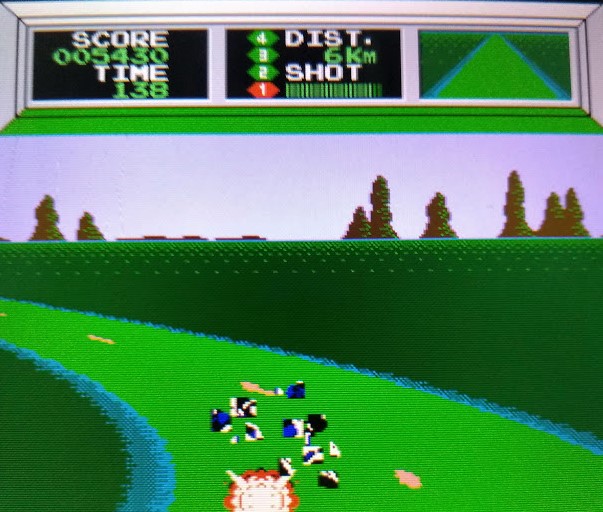 The game's main mode (called "Fighting Course") has ten unique courses, each of which has two track layouts to choose from. I didn't see much significance to the different layouts, though it seemed like ones with less twists and turns would be easier. A very rudimentary story is explained through brief text between stages (like "Invaders got here first, keep searching"). If you beat all ten courses, you go through them again with new layouts to choose from (then the game loops completely). The game is hard, and I've yet to beat the fifth course. 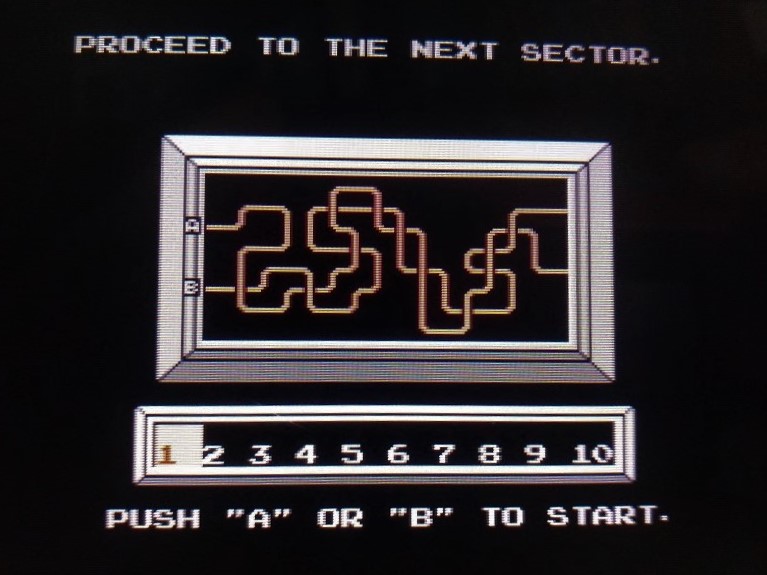 Courses have various obstacles to avoid, such as barrels on the road, oil slicks (no racing game is complete without oil slicks!), and balls. You can blast these away for bonus points. However, you only get 40 shots per life per course, so you can't just spam the B button. You also get points for shooting Quadrunners, which come in six different colors of increasing toughness, requiring one to six shots to destroy. You can also run them off the road into barrels on the side, in which case you get double the points and your ammunition refreshes.

Mach Rider uses a four-gear manual shifting system, but it's unclear when you're supposed to shift. I usually waited a couple seconds, but it seemed like you could just do them all right in a row. In fourth gear, the Mach Rider is very fast, making it hard to steer. I typically stayed in third gear, but shifted to fourth for straightaways and to escape Quadrunners coming from behind. At top speed they quickly disappear into the horizon. I'm sure a good player would keep it in fourth constantly.

The game has a secondary mode called "Endurance Course." It's a time challenge that removes the story elements and gives you unlimited lives. The unlimited lives don't help much since repeated crashing makes it impossible to finish in time. Whereas "Mode B" in most other NES arcade games is just a harder difficulty, this is actually a different (slightly easier) way to play entirely. 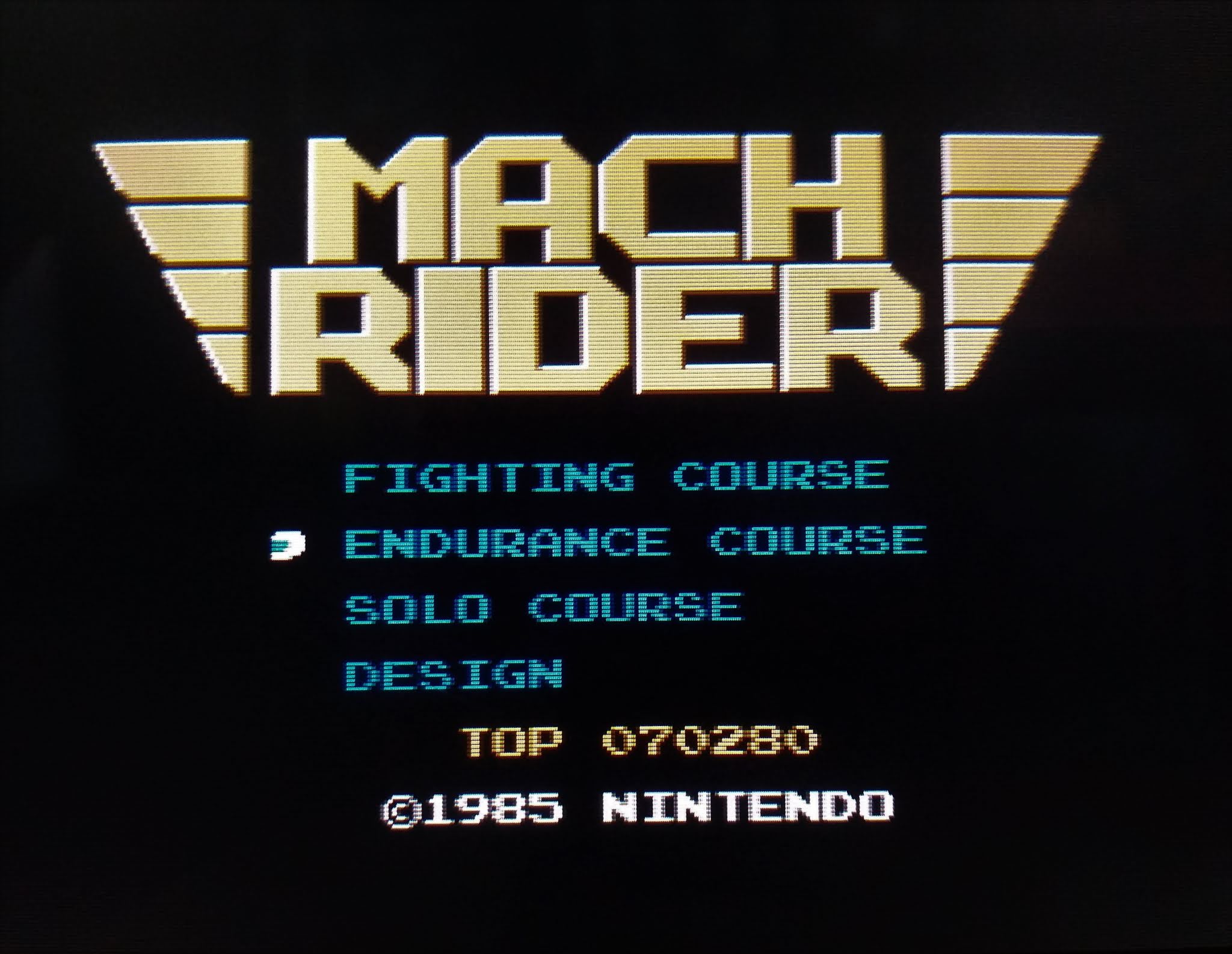 Lastly, this was the third and final game in the "Programmable Series" (after Excitebike and Wrecking Crew). Due to the lack of saving (in the U.S.), it's mostly pointless. You can make a track and then play on it in any of the modes, but that's it. Still, you have to credit the game for having four ways to play!

Mach Rider is a little on the hard side, but it's a solid NES game, especially for 1986. The game looks and sounds fine; it creates the illusion of speed quite well. It only has one music track, but it's not bad. Each level has a different color scheme and background, as well as increasingly-difficult obstacles to overcome. By the time I and my friends got Nintendo Entertainment Systems (ca. 1988), it was just another forgotten Black Box title, so I think it's great that it's gotten new life on Virtual Console. Could Switch be next? 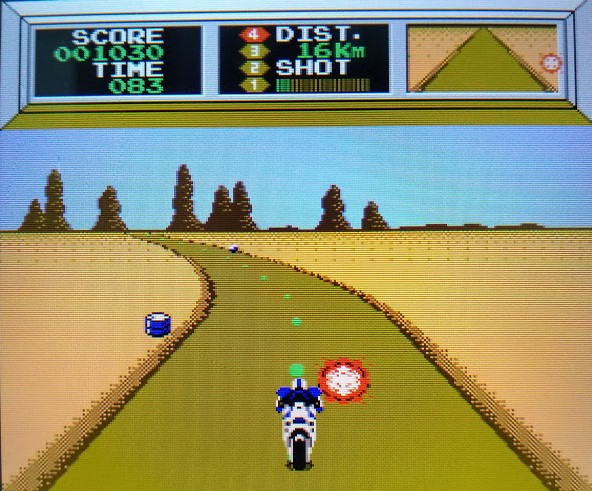 "It's not an all-time classic, but Mach Rider stands the test of time better than most other home console racing games from the 1980s."
— Jake Shapiro, NintendoLife, 7/10

"The gameplay is impressive enough, if a little unrefined, and good enough for a little futuristic fun."
— Pat Contri, Ultimate Nintendo: Guide to the NES Library, 3/5

"Even if it's not all that great on its own merits, it certainly has earned its own little corner of the NES canon."
— Jeremy Parish, NES Works