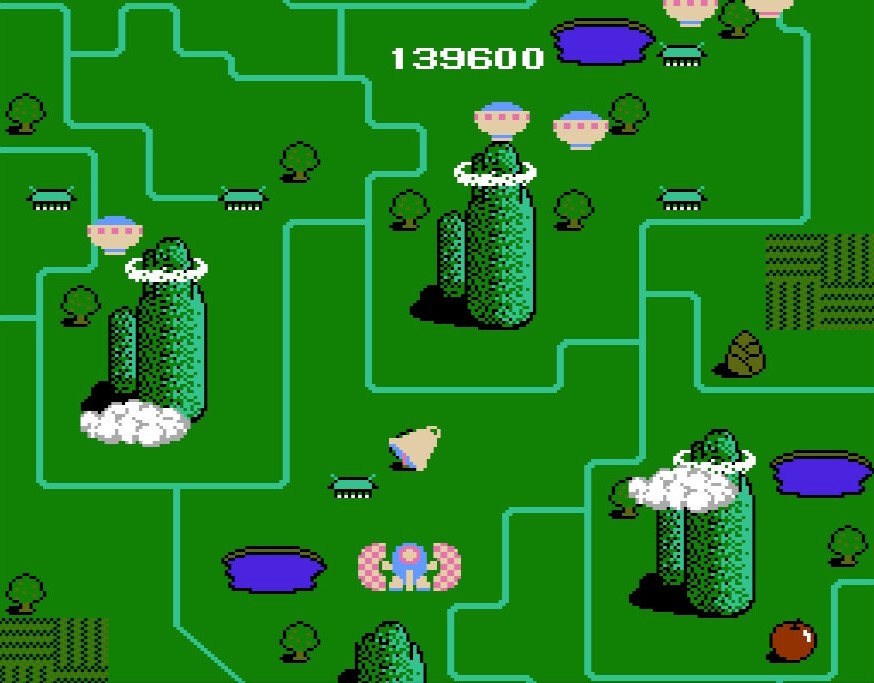 TwinBee is a Famicom port of a 1985 arcade game that never left Japan. It was Konami's answer to Namco's Xevious. As with many early arcade titles, the NES only got the sequel, Burning TwinBee, which was renamed Stinger. 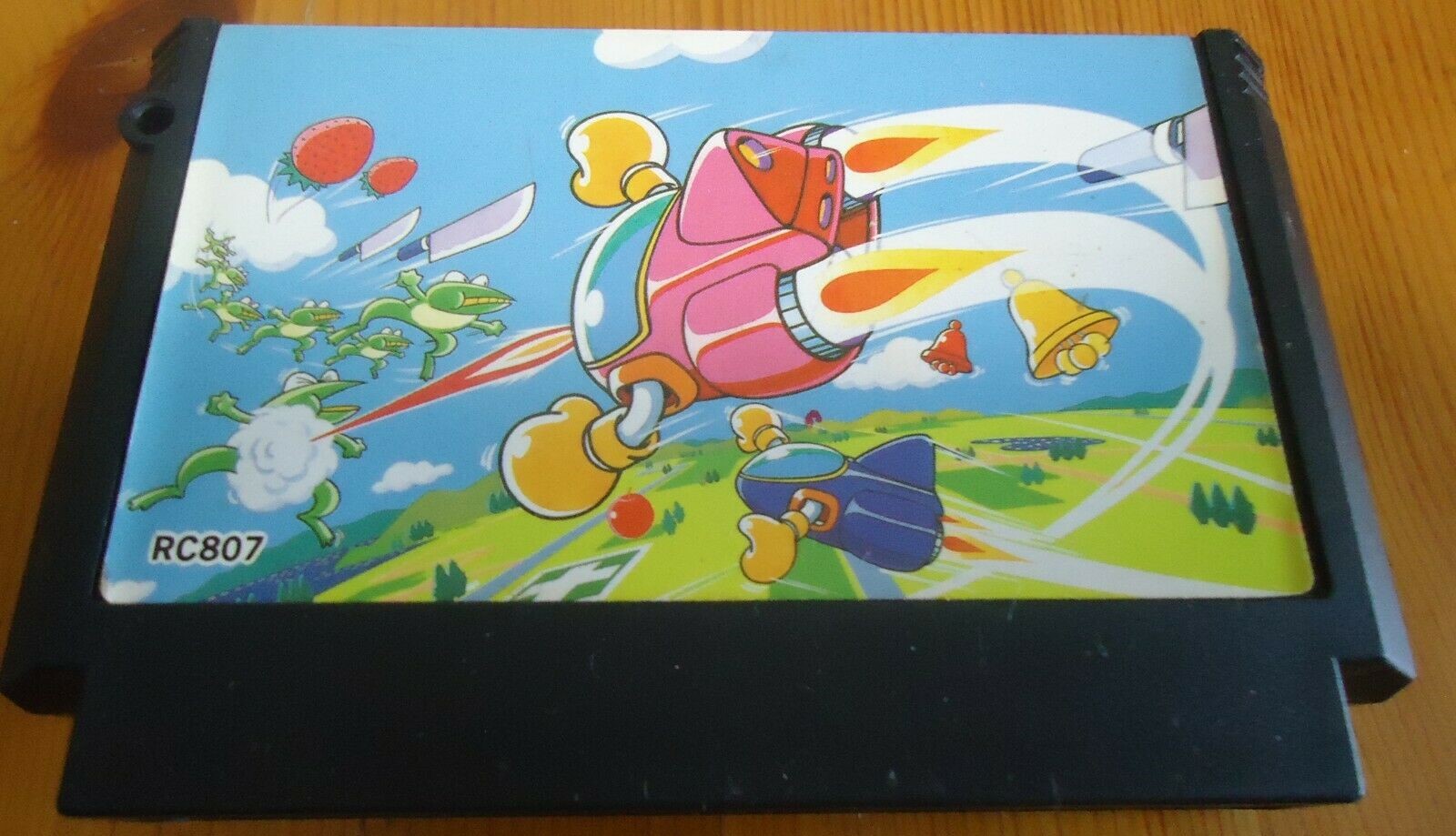 TwinBee is a vertical-scrolling shoot-'em-up. It uses a cutesy style ("cute-'em-up"), so the enemies are things like kitchenware and flowers. The game's main gimmick is that power-ups are gained through color-changing bells. When you shoot certain clouds, a yellow bell flies out. If you catch it, at first you get a mere 100 points, but their value increases progressively to 10,000. If it falls through the bottom of the screen, the count resets to 100 points.

You can juggle the bells by shooting them. Four shots turns a bell blue. A blue bell, instead of awarding points, speeds up your ship (called the TwinBee). If you shoot the bell again, it reverts to yellow, but every five shots brings out a new color: white gives you a second gun; a flashing bell gives you two phantom ships that mimic you; and red gives you a protective forcefield. Taking advantage of these bells is essential to success. Fully-powered up and with multiple speed boosts, the TwinBee becomes a war machine. When you die and lose everything, it feels so underpowered. On later stages, it's a struggle to regain your powers before dying.

Another gimmick of the game (which it stole from Xevious) is that the A button drops a bomb on the ground. You don't need to be in perfect position: automatic targeting locks on if you are close enough to the target. Most of them look like pinecones, but later stages include gloved hands. Ground targets drop bonus items, mostly fruit that awards up to 500 points. A few of them leave a star that clears the screen, candy that gives you a three-way shot, or a baseball that flies around the screen destroying everything it touches.

There are five unique stages, each with a different theme of enemies. The first is fruits and vegetables, the second kitchenware, the third sea creatures, the fourth tools (e.g., magnets, pens), and the fifth flowers and electronics (e.g., lightbulbs). After the first five stages, you play harder remixes of the original stages with the same bosses. Then the game loops to the beginning.

Like most shoot-'em-ups, TwinBee supports two players simultaneously. The second ship is named WinBee, and when the two Bees are adjacent, they shoot fireballs! When one is directly in front of the other, they shoot a wide blast. This is fun and makes the game better, but TwinBee is also good as a single-player experience. 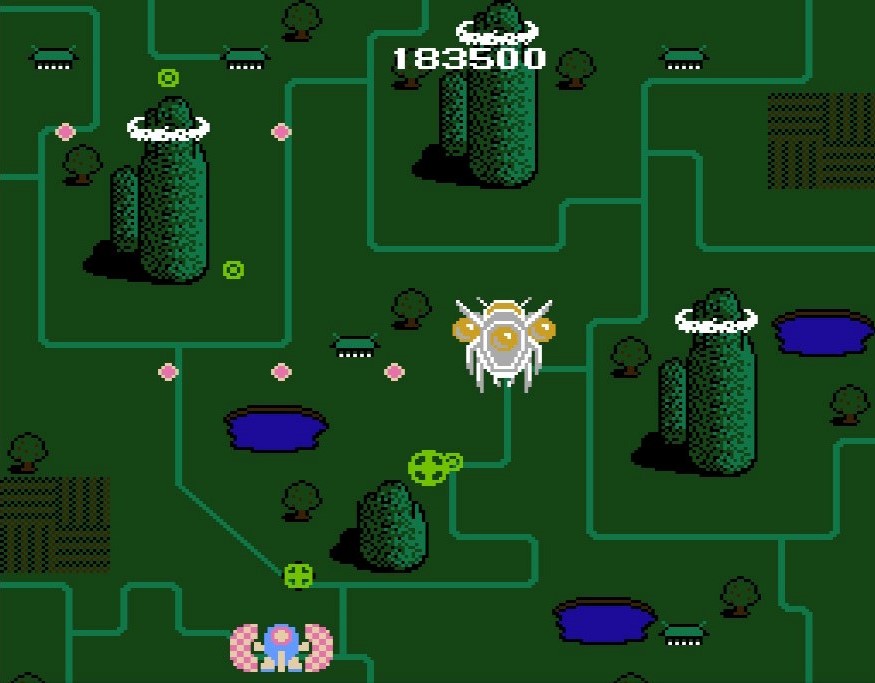 Another interesting thing about the game is that when you get shot, you lose one of TwinBee's arms instead of immediately being destroyed (collision, though, is always instant death). Once you lose both arms, you can't lob bombs. However, sometimes a flying ambulance will appear! Fly into it and it will repair your arms.

It seems Konami wanted to make improvements for the Famicom version. In the arcade, the white bell (second gun) appeared after only three shots, then the blue speed-up five shots later. As a result, it was hard to get repeated speed-ups in the arcade. On the other hand, it also gave you three ghost ships instead of just two (the reduction was likely due to hardware limitations on the Famicom). The console version also adds a penalty if you shoot the final (red) bell five times: it turns into a bee that tries to attack you!

Compared to other early NES games, TwinBee looks and sounds fine. However, it's a step down from the arcade version. By 1985, arcade machines had surpassed what the 8-bit system could replicate. TwinBee on the arcade looks better, almost to SNES quality. It also features voice samples, such as saying the boss's name. I crack up every time it says "Onion Head."

TwinBee's ordinary-life themes are a highlight of the game. The single background music track isn't bad either. I'm not a fan of the bell-bouncing, but it adds an interesting challenge as well as a way for skilled players to rack up a high score. The five years that separate this game from Galaxian show how far the shooting genre had come by 1985. Galaxian looks ancient by comparison.

TwinBee may have missed America originally, but thanks to its modern re-releases as an excellent 3D Classic title on the 3DS and Switch Online game, it can claim its rightful place in the world history of shoot-'em-up games. 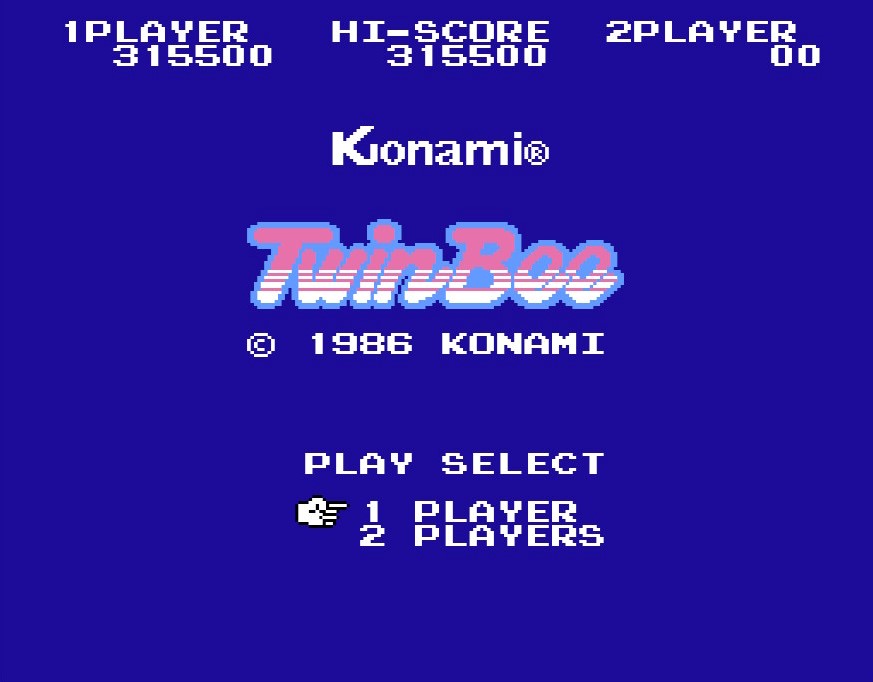