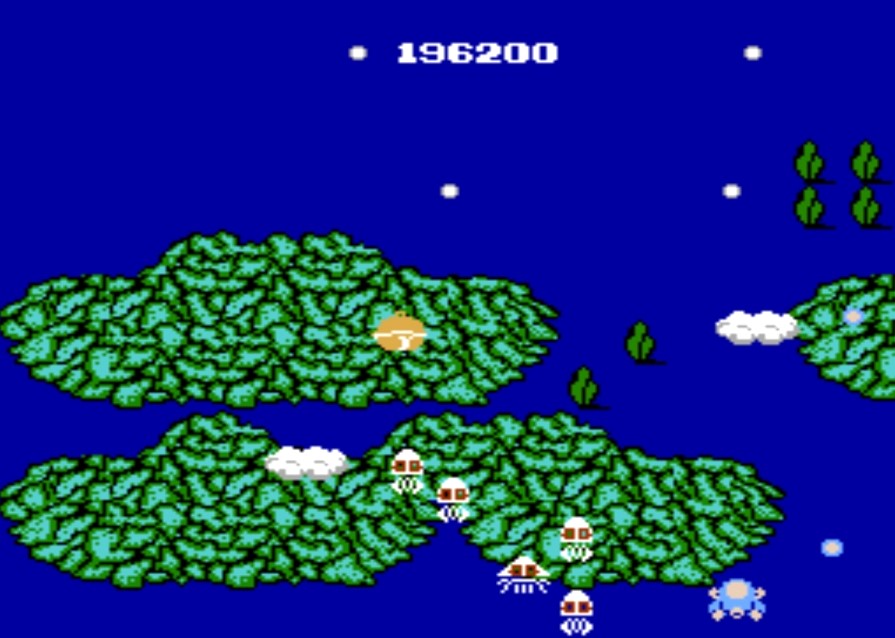 Stinger is the sequel to TwinBee, an early vertical shooter from Konami that was not released in the U.S. (until 2011). While the original TwinBee began life as an arcade game, this and several other TwinBee sequels were Famicom and Super Famicom games only. In Japan, Stinger was called Burning TwinBee: The Rescue of Dr. Cinnamon! I don't know what "Stinger" is supposed to mean.

The main difference between TwinBee and Stinger is that the first, third, and seventh stages of the sequel are horizontal rather than vertical (no doubt due to the success of Gradius). Like TwinBee, Stinger uses a strange power-up system: shooting clouds causes bells to appear. If you juggle these bells by shooting them, they change color every five bounces, with each color offering a different effect. On the vertical stages, you shoots bells with your normal attack (press B). On the horizontal stages, you use the A button to launch a heart-shaped projectile upward. This is used both to release and bounce bells.

The default yellow bells are worth points. Their values increase (maxing out at 10,000) so long as you don't let any fall off the bottom of the screen. After five bounces, a bell turns blue. Collecting a blue bell speeds up the TwinBee (your ship). If you shoot a blue bell again, it reverts to yellow, but after four more shots it will turn white. A white bell gives the TwinBee a double shot (again, another shot turns the white bell back to yellow). The next bell color is pink, which upgrades your weapon into a laser than can slice through multiple enemies at once. After that is a flashing pink bell, which gives you two invincible ships that mimic your every move and attack (like the "Option" power-up in Gradius). The ultimate upgrade is a flashing blue bell, which gives the TwinBee a defensive shield that can absorb multiple hits. Don't keep bouncing the bell after that, though, or it will eventually turn into an enemy. One of the more frustrating things about this system is when you accidentally shoot a bell one time too many!

You can choose in what order to pursue upgrades. I like to start with two or three speed upgrades (after four, the ship may move too quickly for precision). Without these upgrades, the ship is too slow to effectively dodge attacks. Once the TwinBee is up to speed, I try for either the laser (pink) or the shield (flashing blue). Easier said than done! Lastly, I want the ghost ships (flashing pink). This suite of upgrades, though very hard to acquire, makes the game both easier and more fun.

On the vertical stages, pressing A lobs bombs. If you are close enough to a valid target, the bomb locks in and hits automatically. On the horizontal stages, since the A button launches the heart, bombs simply drop automatically as you shoot.

Ground targets drop bonus items. Money bags bestow points, as do stage-specific icons, such as an ostrich head, the Konami logo, and Goemon (aka Kid Ying). You can get an extra life (cross), a side shot (L or R; if you get both, it changes to a rear shot), a triple spread shot (moon), and a five-way spread shot (star). The spread shots are incompatible with the ghost ships and won't appear when you have them. A question mark either turns all enemies into bells, destroys all enemies, grants the TwinBee temporary invincibility, or becomes a skull and does nothing. Finally, the face of the abducted Dr. Cinnamon lets you play a bonus stage after you beat the current level.

A quirk of TwinBee is that, on the vertical levels, the TwinBee has two arms. (The arms disappear in the horizontal stages because there isn't a third axis for them to exist along.) When an arm gets shot, it is destroyed, though they can be repaired by an ambulance ship. If you lose both arms, you can't drop bombs anymore. However, the arms rarely matter in my experience because you collide with the enemy—resulting in instant death—far more often than you get shot.

Also, when the TwinBee is destroyed, some kind of haloed soul floats away. If you catch it before it exits the top of the screen, the TwinBee re-acquires some of its power-ups. However, the next time you die you lose them for good. Unlike Gradius, Stinger is merciful and gives you unlimited continues. You'll need them, too, because the game gets hard. Apparently if you beat the game, you unlock a hard mode, too. 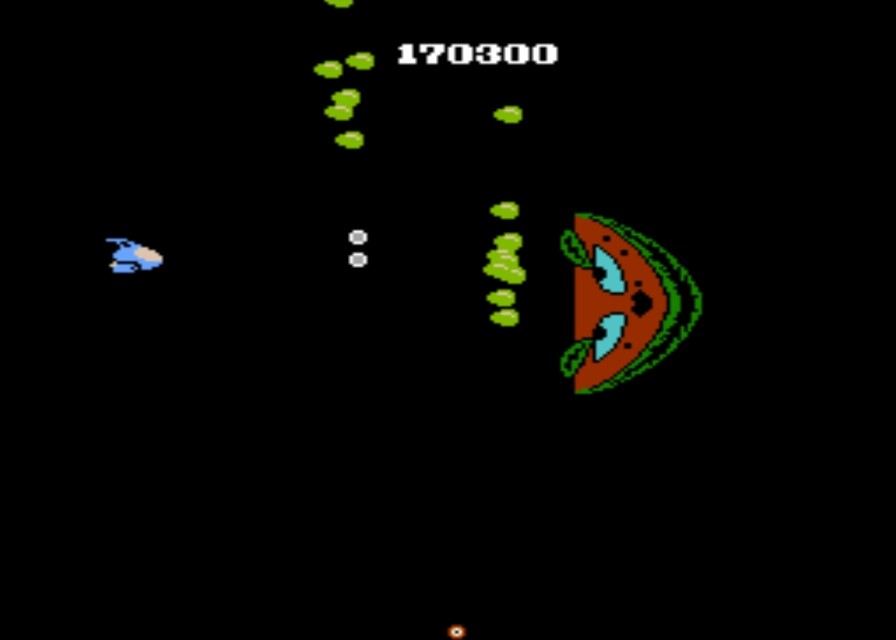 One of the charming things about TwinBee and Stinger is that the enemies are cute little monsters (e.g., stars, fish, turtles, insects), foodstuffs (e.g., fruit, popsicles), and household objects (e.g., fans, irons, telephones, televisions, footballs). Each stage ends with a different boss. The first level you have to fight a watermelon that shoots its seeds at you, and the second an octopus that shoots its tentacles like rockets. I appreciate this stylistic approach and enemy variety, especially with the different bosses. 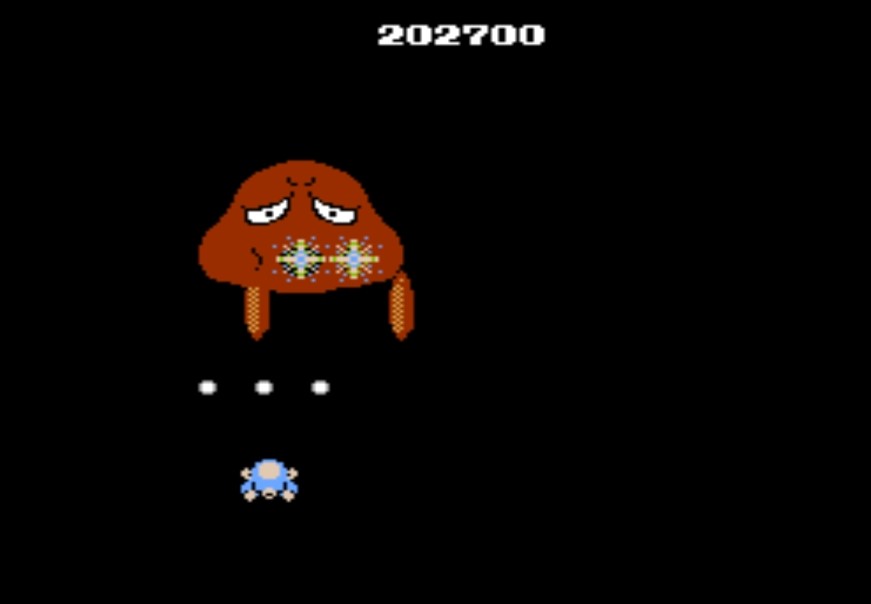 The main difficulty of this game is managing the bells without flying heedlessly into danger or failing to pay attention to the enemy. It's never worth it to gain a power-up yet forfeit a life. But at the same time, you won't survive long without power-ups. You must chase them and may not always have time to look before you leap. Stinger is all about reflexes.

The Famicom version of Stinger amazingly allowed three players to play at the same time, but this was reduced to two in America. What a shame, because that third player option would have made this game stand out, whereas it's largely forgotten today. Unfortunately, the four-controller peripheral wouldn't be released until 1990 in America.

I liked TwinBee, and Stinger is mostly more of the same. Instead of five vertical stages now you get four vertical and three horizontal. The audio and graphics are charming, if a bit mediocre. Stinger isn't a huge leap forward, but if you liked the original (which of course Americans didn't have access to in the twentieth century), you'll probably like Stinger, too.

Linked Reviews
"It's a busy game, and despite its cute visuals will provide a solid challenge for players."
— Joel Couture, Nintendo Life, 7/10

"Gameplay is smooth and the difficulty is just the right amount to keep things interesting but not frustrating."
— Pat Contri, Ultimate Nintendo: Guide to the NES Library, 3.5/5

"It's largely forgotten, and that probably has a lot do with the fact that it's as adorable as heck."
— Jeremy Parish, NES Works 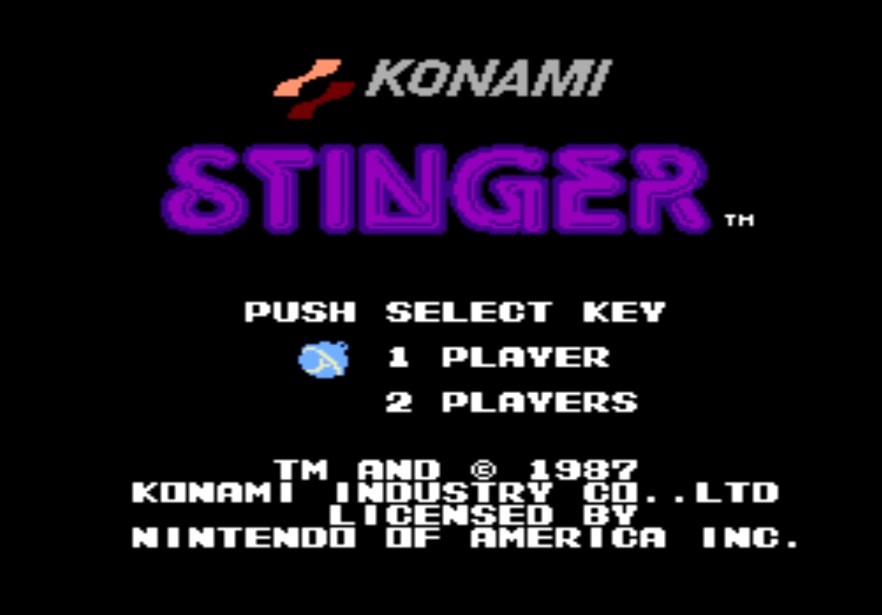 March 22, 2022
Growing up, I played The Legend of the Mystical Ninja at my best friend's house (though I was bad at it), and I had been looking forward to trying it again. It's an unusual, fun adventure game. I recently learned that in Japan Legend of the Mystical Ninja was preceded by three Famicom games and followed by three more Super Famicom games, none of which were localized for the West! The Japanese name of the series is Go for It, Goemon! It's based on a 1980 Japanese arcade game called Mr. Goemon. The emulation community put out fan translations of the Famicom games between 2009 and 2017. Surprisingly, no translations of the Super Famicom games existed until 2020, all three created by the same people . The series takes places in early-modern Japan. It has a light-hearted anime aesthetic. The titular character is a spiky-haired kid named Goemon. If a second player joins the simultaneous action (highly recommended), Goemon is assisted by an older, overweight ninja named Ebisumaru.
Post a Comment
Read more

July 15, 2022
Thirty years ago today Street Fighter II made the transition from arcade to living room on the Super NES. Although quickly eclipsed by its two successors, for one year it was the hotness. It would be hard to overstate how popular Street Fighter II was in the early 90's. Its predecessor was downright bad, but Street Fighter II invented the PVP fighting genre as we know it. Its roster of eight characters was a huge step-up from Street Fighter's two (Ken and Ryu, who returned for the sequel). The next iteration of the arcade game, Street Fighter II: Champion Edition, which hit arcades just as the SNES port arrived, let you play as the bosses as well, increasing the roster to twelve. A false rumor said a secret code would let you play them at home as well. While that wasn't true, there was a code (↓, R, ↑, L, Y, B) to let both players choose the same character for a mirror match. A prime strength of the game is how interesting each character is: the American airman Guile (think
Post a Comment
Read more