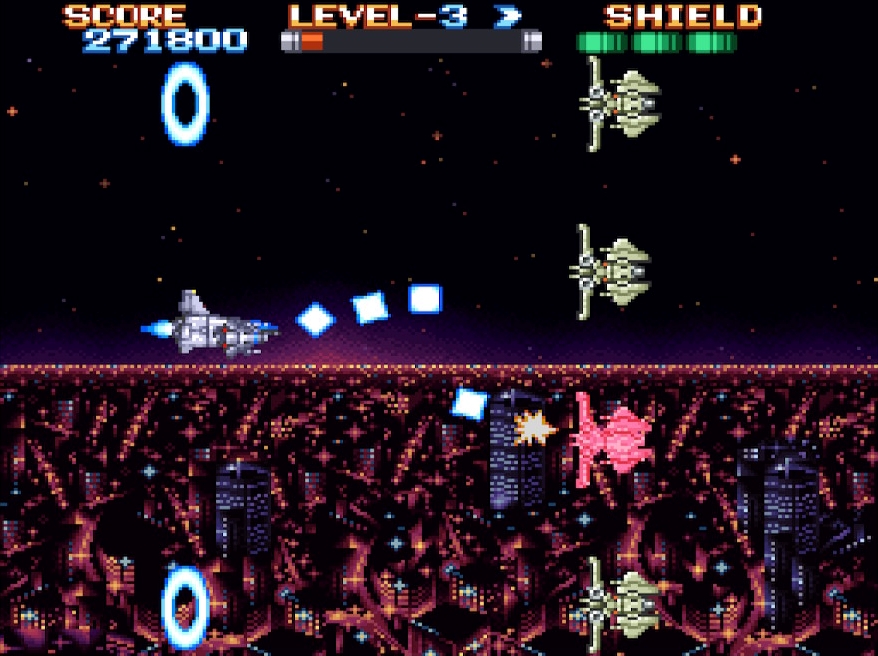 Earth Defense Force is an SNES port of the 1991 arcade game of the same name. The title screen places a small "Super" before the title, but the box and cartridge just call it Earth Defense Force, same as the arcade version. I've never played the original, but apparently it has less weapons, a two-player option (sadly lacking here), and some different levels.

Earth Defense Force differs from your typical side-scrolling shooter in that you choose your weapon and speed without having to pick up items. The ship, the XA-1, has three different speeds you can toggle between by pressing X (though I always use the highest speed). Before each stage, you select one of eight weapons. You can choose whichever you think is the most fun or useful. Two of the weapons stand out as superior: Homing and the Search Laser. Homing homes in on the enemy (duh). Search Laser achieves the same effect because with it your satellite ships automatically turn toward the enemy.

You see, the XA-1 carries two invincible satellite ships, which may be configured into different positions. They begin docked on the front of the ship, where they absorb enemy fire (but not lasers). When docked, their attack combines with the XA-1's to form a single powerful shot. If you press A, the satellite ships begin to orbit the XA-1, firing their own separate shots. 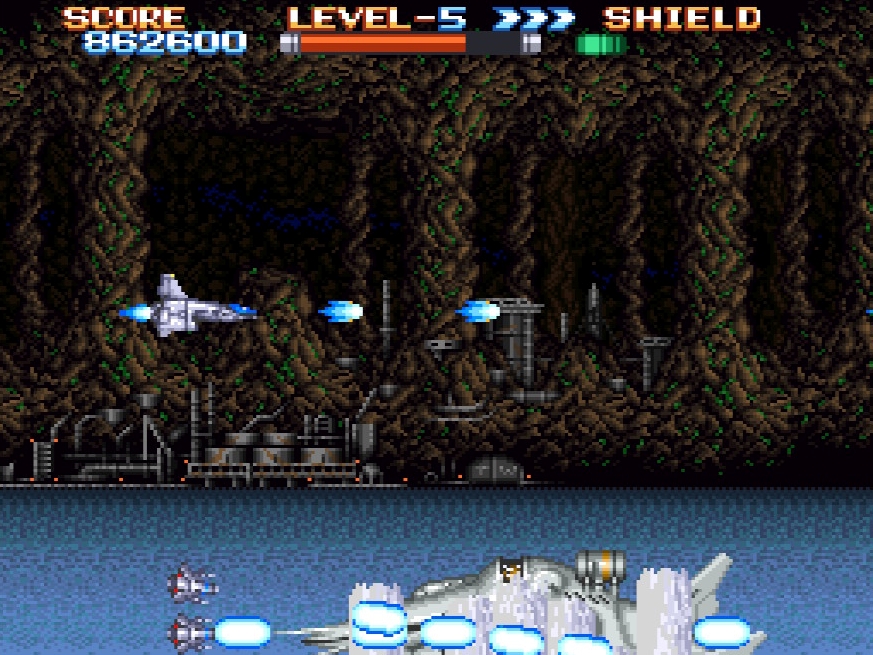 As you destroy enemy ships, a level meter fills up. Once filled, you gain a level. Each level increases the power (and shape) of your shots. When you reach level 3, you gain a powerful new position for your satellite ships: Shadow. With this engaged, they mimic the XA-1's movements, "shadowing" it. Even more useful is the Homing position that unlocks at level 5. With this, the satellite ships seek and destroy targets on their own. Once you have this, the Homing and Space Laser weapons become obsolete, thus freeing you to choose a more powerful option. Atomic is useful because it is the only weapon that clears enemy fire. But if you have the piloting chops to dodge bullets, the most powerful weapon may be Explode. When it makes contact, it shoots four additional projectiles in all diagonal directions.

Another unusual feature of E.D.F. is that the XA-1 has three shields. Instead of exploding and starting over from a checkpoint whenever it gets hit, it loses a shield and keeps flying. If you're at level 5 (the maximum) and gain a level up, you gain an extra shield. The game allows three continues — the manual refers to this as having four ships — and happily the level meter does not reset after continuing. After a few tries, I was able to power up to level 3 and eventually 5. The game is more fun once you have the Shadow and Homing positions for your satellites.

Earth Defense Force has six stages, each concluding with a unique boss. The bosses aren't too exciting, basically damage-sponges. The regular enemy ships are generic, and the stages do not include any obstacles to dodge (e.g., asteroids). The whole game is played in empty space. The first level is easy, but the difficulty ramps up steadily. It becomes so hard that I haven't yet been able to get past level 4. Like too many NES and SNES games, it's held back by the artificial difficulty of limited continues. (Games like this make me question my policy of not using save states, but I want to evaluate them as they were played in their own time.) 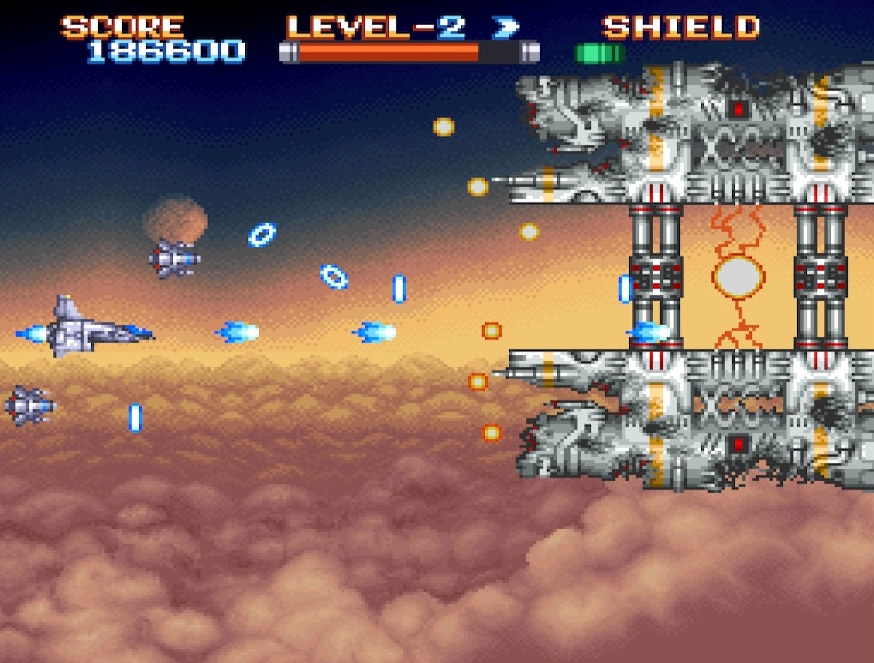 Each level has a unique look and musical theme. Some levels have interesting background effects: in the fourth, for example, the XA-1 approaches a space colony that comes under a laser attack. The music is typical for the SNES and reminds me of F-Zero, though not as memorable. The graphics and music won't blow anyone away, but I enjoyed them. The game does experience some slowdown when many objects are on screen at once.

Earth Defense Force is fun. My personal point of comparison is Gradius, an older game. On the SNES, it had to compete with Gradius III (a launch title). Next to that, this looks and feels a bit like off-brand cereal or Hydrox cookies. But I'm sure it has a fondness in the hearts of those who owned it as a kid, and I liked playing it, too. 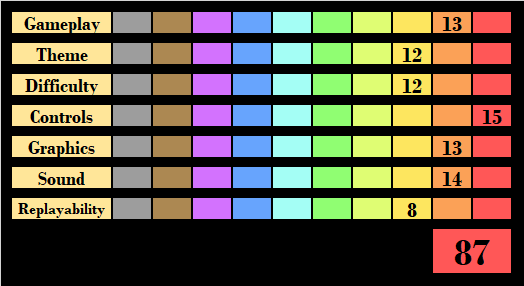 Grade: B+
Linked Reviews
"Super E.D.F. is not a truly bad game, it just never seems to reach beyond its overly mediocre gameplay system and uninspiring presentation."
— Corbie Dillard, Nintendo Life, 6/10
"The game looks great for an early SNES title. This is a seriously hard game that takes a lot of practice and even more patience to master."
— Jim Evans, Ultimate Nintendo: Guide to the SNES Library, 3.5/5 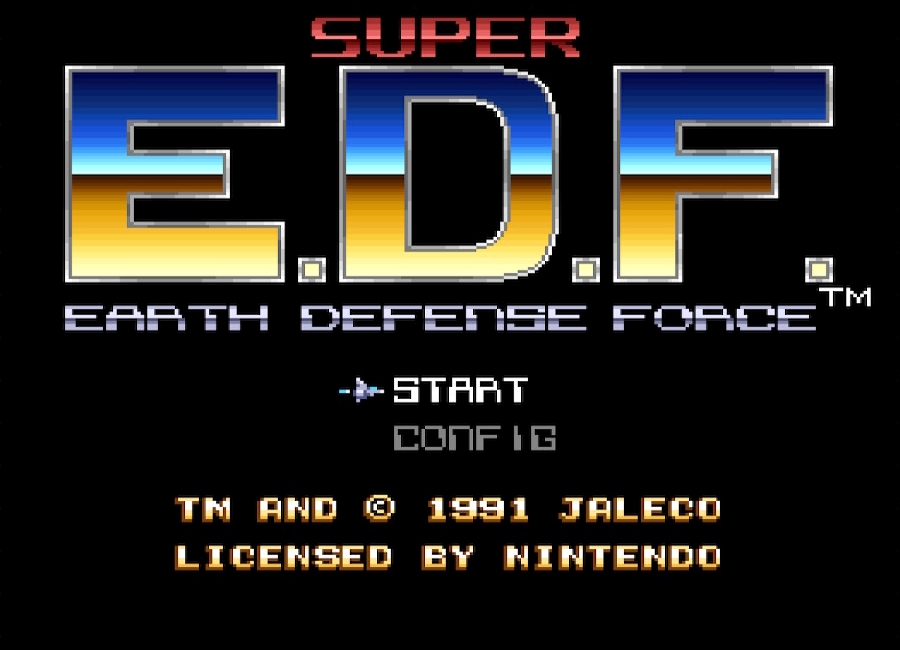