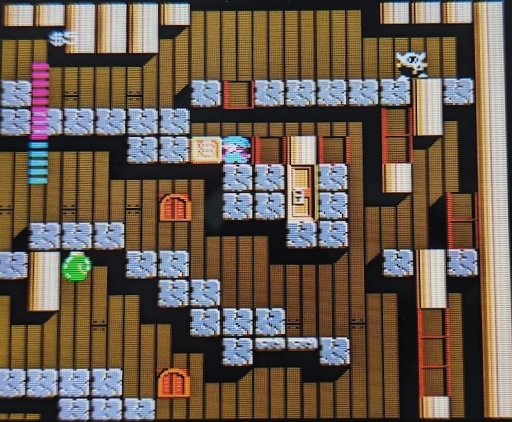 Milon's Secret Castle is an action-puzzler from Hudson Soft. It stars a boy named Milon, who must wend his way through a labyrinthine castle, attacking enemies with bubbles. According to the manual, he seeks to rescue Queen Eliza, who has been imprisoned inside the castle by a warlord.

The castle is navigated by doors on the outside. Behind each door is a small stage, shop, or boss fight. Stages are standard platforming fare, with many blocks. Some of these blocks disappear when shot with a bubble. A few leave behind money, which can be collected only once. However, one stage on the third floor regenerates its hidden money, enabling you to get as much as you need later in the game.

Enemies continuously spawn in stages. They can be destroyed by bubbles, often leaving behind a heart to refill a point of Milon's health meter. Occasionally they drop an umbrella, which increases the firing rate of his bubbles. You must be careful, though: Milon can be hit repeatedly by the same enemy in rapid succession. This makes the game harder than it should be.

Almost every stage contains a hidden honeycomb that replenishes Milon's life meter and increases its maximum capacity by one. Collecting these is essential, as the game is really hard—NES hard. Each stage also holds a music box that is revealed when Milon hits his head against a certain block (not unlike a certain plumber). The music box takes you to a bonus stage where musicians play while musical notes fly around. The more notes Milon catches, the more money you acquire. Beware, though: the flat notes (a lowercase b) deduct from your total.

To exit a room, Milon must find the key and door, but this is almost trivial. As you spray each room with bubbles, looking for pathways, money, and the honeycomb, you will invariably reveal the hidden key and door as well. The game's challenge comes entirely from the regenerating enemies and has nothing to do with finding the doors and keys.

You must solve a hard puzzle to make the first boss appear: a gold dragon named Homa. It will only appear after you buy the shoes. Both of the stages on the first floor contain a shop that sells them, but they are concealed: their doors open only after you push aside a certain block. To do so, you must hold the d-pad for several seconds (longer than in The Legend of Zelda). As the game's manual says nothing about this, I was driven to look online to figure out how to proceed. I suspect that many 80's children gave up at this point, still on the bottom floor of the castle.

There are light RPG elements (similar to Kid Icarus and Rygar), both in terms of upgrading your health bar and purchasing new items. The aforementioned shoes allow Milon to bounce high off springboards, enabling him to reach otherwise inaccessible ledges. A potion makes Milon small whenever he gets hit with a spring-loaded boxing glove (!?). This allows him to squeeze under low overhangs. Milon needs the torch to illuminate the inside of the well, which contains the passage to the castle's third floor.

Shops contain cryptic hints about how to proceed, such as "A waterpot in icy room." Riiight... The manual doesn't describe any of the twelve items, and the in-game explanations are as opaque as the hints. Without a guide, Milon's Secret Castle is utterly baffling. Ideally, a player should approach with an open and inquisitive mind, seeking to solve these puzzles for yourself. But the frustrating nature of the gameplay makes this less appealing than when playing a good game like Zelda or Metroid.

If you can persevere to the second half of the game, Milon starts to power up enough that the game becomes more fun. The levels change enough to stay fresh, but I can't say that any of them is memorable or exciting. People who give up aren't missing much.

Clearing the first two rooms is easy, but the boss fight with Homa is tough. All the bosses in the game are just re-skins with more hit points, not unlike another Hudson Soft game, Adventure Island. They hop up and down throwing fireballs, while slowly advancing then retreating. The fireballs can be dodged with practice. The bosses are damage sponges and can be hit only in the head. A small saving grace is that Milon can back out of the room if he gets low on health, then grind enemies for hearts, and try again. Dying means starting the game over, and although redoing the first two rooms and buying the shoes takes just a few minutes, it's an irritating waste of time. Once you beat the first boss, you gain access to a secret continue button combination (← + START). Mercifully, this code is given on the final page of the manual, labeled "Secret Information." Given how long the game is, hiding the continue is egregious, but that's the 80's for you! 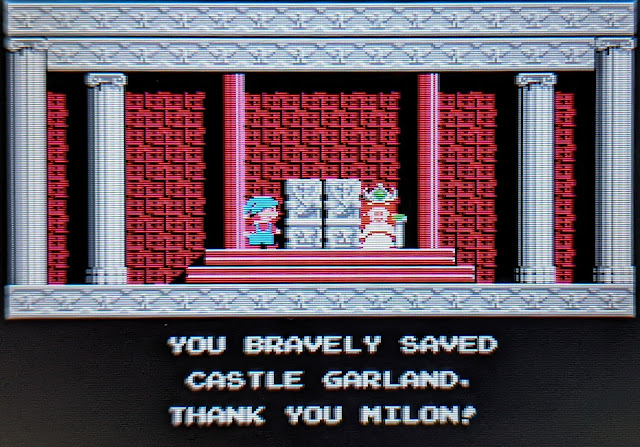 The graphics are all right and will appeal to anyone with nostalgia for the 8-bit era. The background music is mediocre and the same in every stage. I mostly enjoyed Milon's Secret Castle. I'd even venture to say it's slightly underrated. However, it's not fun enough to justify how difficult and confusing it is. When compared to a classic game like Metroid, Zelda, or even Kid Icarus, it seems poor, but I think that's too high a bar. Milon's Secret Castle is fine, even if sub-par. A few quality-of-life fixes could do wonders for this game: invincibility whenever Milon gets hit, saving, starting with full health instead of four bars, clear explanations of the items, and more frequent health drops. Alas.

"While cute and engaging, this game may suit only the most patient player."
— Asheton Phinney, Ultimate Nintendo: Guide to the NES Library, 3/5 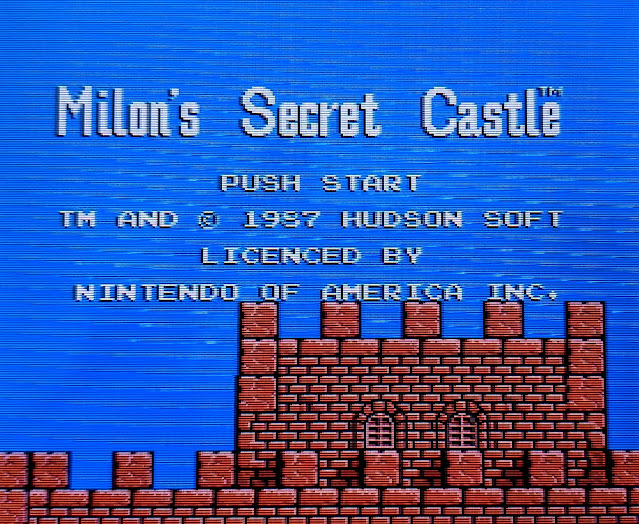