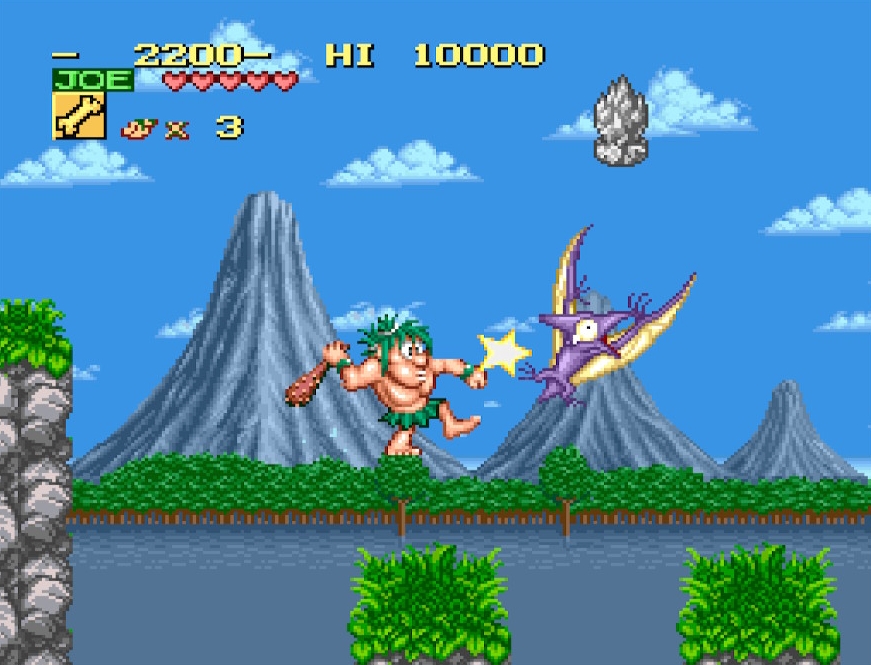 Joe & Mac is a Super Nintendo port of the Data East arcade platformer Caveman Ninja. There's nothing "ninja" about the game, but the Teenage Mutant Ninja Turtles craze in the early 90's made the word ninja very popular, so marketing people just slapped it on anything. Joe & Mac is the poster child of a "rental game," meaning a game you should rent rather than buy.

The titular Joe and Mac aren't ninjas, but a couple wild and crazy cave-guys. They boast green and blue hair, respectively, yet unexpectedly for cavemen are clean-shaven. You can play solo or two-player. There are three difficulty settings. And let's not forget that you can choose between stereo and monaural sound!

Joe and Mac have several moves at their disposal. Besides the usual jumping, they can do a higher rolling jump if you hold ↑ when you press X or Y. They can also somersault through enemies by double tapping → or ←. They can catch a ride atop pterodactyls and other enemies, allowing them to reach power-ups (such as extra lives) suspended high in the air.

Joe and Mac have a health bar of five hearts, which can be refilled by collecting food like steaks and chicken legs, either lying around or dropped by defeated enemies. Ranged weapons may be found in the open or inside brown dinosaur eggs. Once you pick up a weapon, you keep it in your inventory until you run out of lives. You can change between them at any time by pressing SELECT. Sometimes you find a red egg, which contains a friendly pterodactyl who grabs you with his claws and carries you to a bonus area.

Joe and Mac's default weapon is a club. With this you can bash Neandertals and dinosaurs (press A or B). As you progress throughout the game, you pick up ranged weapons that fire when you swing your club. These are the bone, boomerang, fireball, and stone wheel. The bone has limited range but can be fired rapidly. The fireball is powerful, but you may shoot just one at a time. It burns on the ground briefly after landing (like in Ghosts 'n Goblins and Super Ghouls 'n Ghosts!). The boomerang does what you'd expect and is superior to the bone. The best weapon is probably the stone wheel, because it rolls along, even climbing slopes and cliffs, until it hits an enemy. You can launch two wheels at once.

One of the worst things about Joe & Mac is how slowly the characters move, with a correspondingly floaty jump. There is nothing here of the speed or precise handling of the Super Mario series.

The main reason this is a "rental game" is that there's so little to it. There are twelve stages. A world map tries to trick you into thinking the game is longer, but the stages are linearly connected, with intermittent gray circles that mark where you continue when you run out of lives. The map also holds bonus stages, accessed by keys hidden in levels. These bonus stages are not additional levels, merely staging grounds for obtaining bonus lives, food, and weapons. 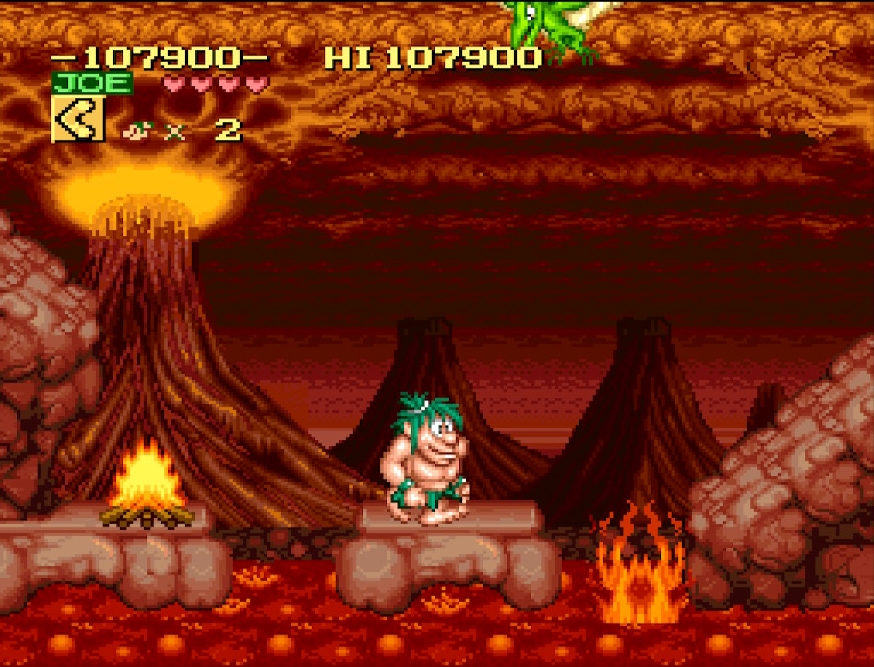 The main stages are linear and forgettable. They contain the normal elements of platforming, such as slopes, ditches, and platforms. Although some contain additional hazards like erupting lava, they are all very similar. At the end of each level, a cavewoman (predictably called a "cave babe" in the manual) comes out and kisses the hero. 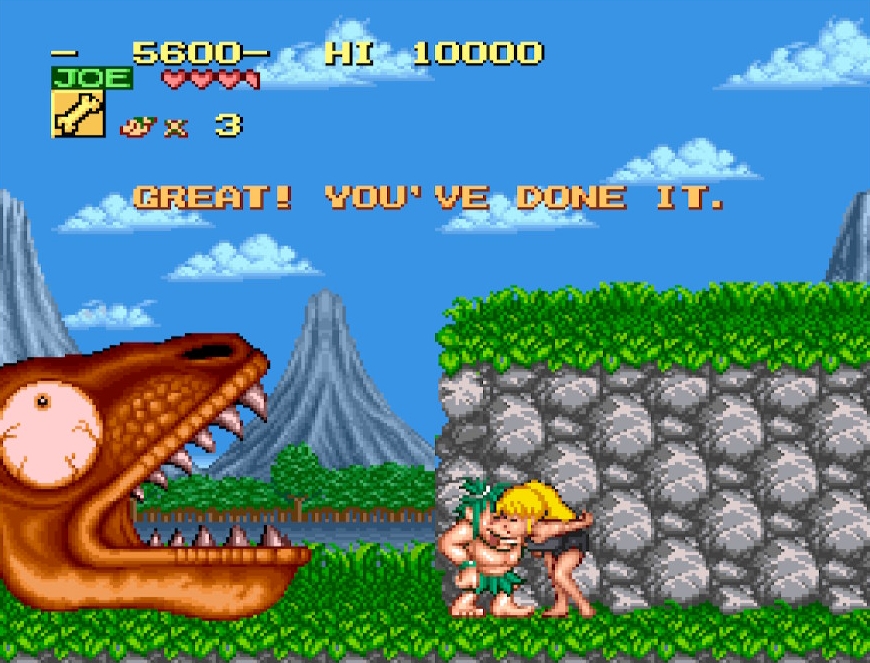 It doesn't help that there are only a few different enemies. They are stereotypical, hairy Neandertals, various dinosaurs, and a few other prehistoric critters. Some of the Neandertals operate Flintstones-styles vehicles like cars and helicopters, which I'll admit is amusing. When Joe or Mac dies, he at first floats around as a harp-playing angel, which is cute, I guess.

Because of the similarity of the levels, enemies, and weapons, Joe & Mac feels the same from beginning to end. Unlike the Super Mario series, where each world and even each level has something new to experience, once you've played the first two or three levels of Joe & Mac, you've seen all it has to offer. After that, it's just a matter of whether you can complete the rest of the levels before you run through your three continues. Even the boss fights are dull and repetitive, usually a giant dinosaur of some kind.

I made it to the penultimate level on both Easy and Medium modes. Although I'm sure I could beat it with a few more tries, I didn't want to. I was annoyed (once again) by the artificial difficulty most arcade ports impose by limiting how many continues you get. The only reason they did this was to prevent players from quickly finishing their games, since they tended to be shorter than games designed for home consoles.

Like I said, this is a rental game. You get it, play it for one night, hopefully beat it, and then return it. There is not enough here to hold a person's interest for long. I found the music and graphics mediocre, though some may be charmed by the cartoony caveman shtick. You have to pity the kid that had this at home instead of, like, Super Castlevania IV. Granted, Joe & Mac came out in early 1992, so the competition on the SNES wasn't that fierce yet. Interestingly, an NES version of Joe & Mac came out a year later, near the end of that system's lifespan! 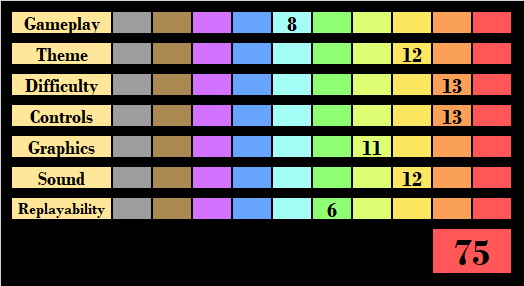 "This was an important title for the young Super Nintendo, as its graphics, popping colors, and animation differentiated it significantly from the then-aging NES."
— Pat Contri, Ultimate Nintendo: Guide to the NES Library, 8/10 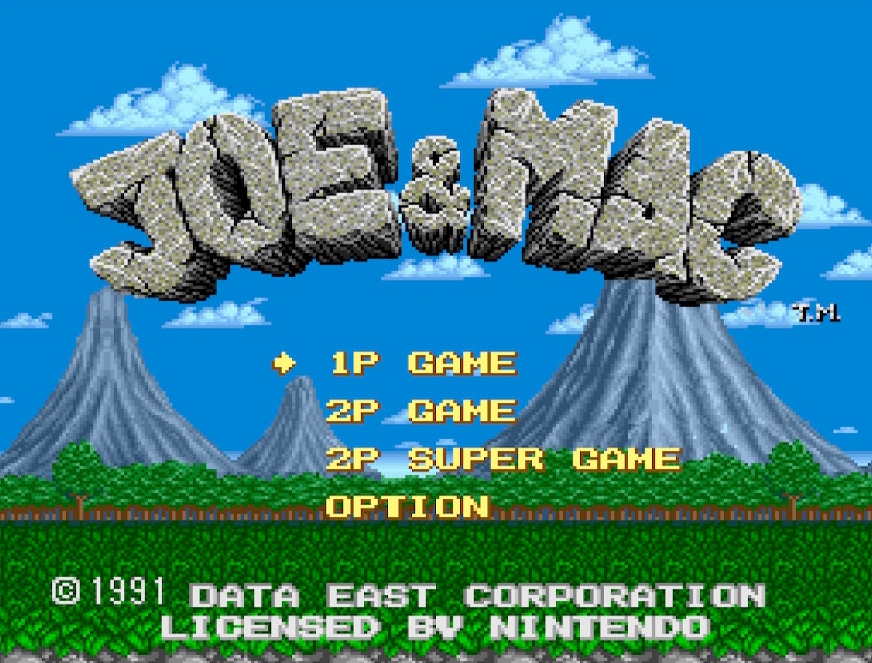