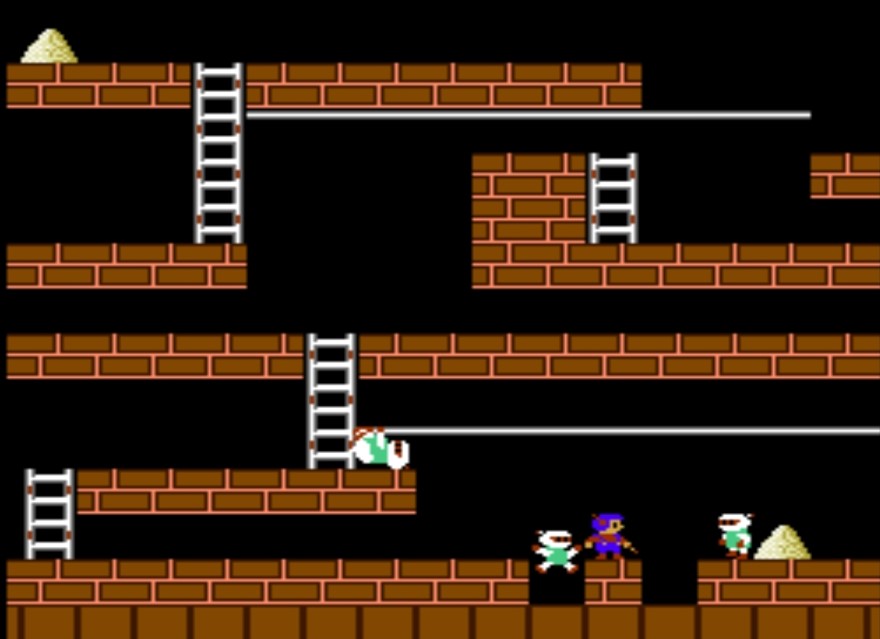 Lode Runner has a lot in common with Spelunker. Both were originally computer games published in the early 80's. Both are arcade-style platforming games in which you collect treasure. Both were ported to the NES in 1987. And both NES versions were published by Brøderbund! Lode Runner is the better game, although that's not saying much.

Each stage of Lode Runner consists of various platforms connected by ladders and horizontal ropes. To beat a stage you must collect all the heaps of gold coins lying about, then exit via a ladder that appears at the top. The game has a lot in common with Wrecking Crew and BurgerTime, especially in the fact you must constantly evade enemies that home in on you, and you can't jump.

Your only defense is to create a hole in the brick floor to the left (press B) or right (press A). It's not clear by what mechanism this occurs: a gun? A magic wand? Definitely not a shovel. Anyway, the enemy often walk into the holes you make. While an enemy is in a hole, you can walk over it. However, they climb out after about three seconds. Your holes automatically fill in after about five seconds. If an enemy is in one at that time, perhaps because you created two or three holes in succession, it is destroyed. Enemies immediately respawn at the top of the stage, so sometimes it's better to hinder them rather than destroy them. If you fall into a hole, you cannot climb out and lose a life. Certain blocks are solid (metal perhaps) and cannot be removed, creating additional difficulty as you try to chart a path to each treasure. On some stages it is possible to become stuck, in which case you must press START, then SELECT to restart the stage (like in Wrecking Crew).

The goal of the game is to set a high score. When you clear a stage, you get 100 points for each treasure plus 100 points for each enemy you destroyed. If you get caught by an enemy before finishing, the treasures you collected do not count and you must restart the level with one less life. Every stage you beat earns you an extra life. Very rarely a piece of fruit worth bonus points will appear somewhere. There are fifty stages and (again like Wrecking Crew) you can start from any stage you wish. The computer game had 150 stages, so I guess the NES cartridge didn't have enough storage capacity. 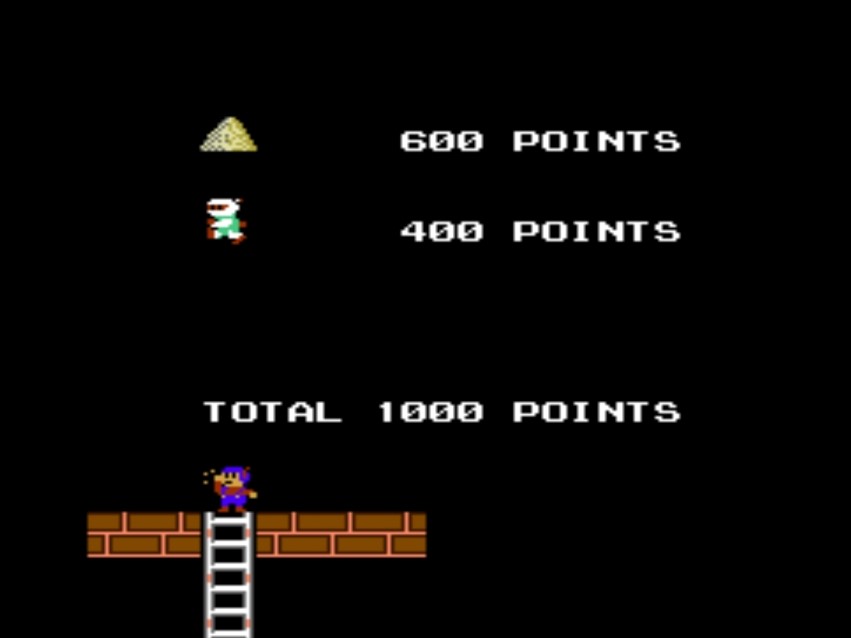 Some treasures are placed in areas that do not seem immediately accessible. At this point the game becomes an action-puzzler, as you have to work out how to get to the treasures without trapping yourself in the process. On the sixth stage, for example, a treasure is buried beneath several layers of brick. You have to dig away several blocks of the top layer, then quickly drop down, dig out a second layer, then dig down once again to create an opening to the treasure, and finally descend to it. All of this must be done in a few seconds, or the holes will close up and trap you. Keep in mind that you have to do this while keeping a watch for the enemy, because if any come into the ditch with you, you will have no way to protect yourself.

I found the game difficult because the enemies cannot be permanently defeated and they climb out of holes rapidly. The challenge is amplified by the fact that the stages are wider than the screen and thus you cannot see enemies off screen. The screen scrolls only when you are close to its edge, which means, if an enemy appears—as they often do—you will need to react immediately. Sometimes you are chased by one enemy only to run into another that was just off screen. This added difficulty is unique to the NES version of Lode Runner: early computer games did not have scrolling technology, so the whole level was designed to fit onto the screen! The NES version opts for larger sprites, which is consistent with how most NES games look. 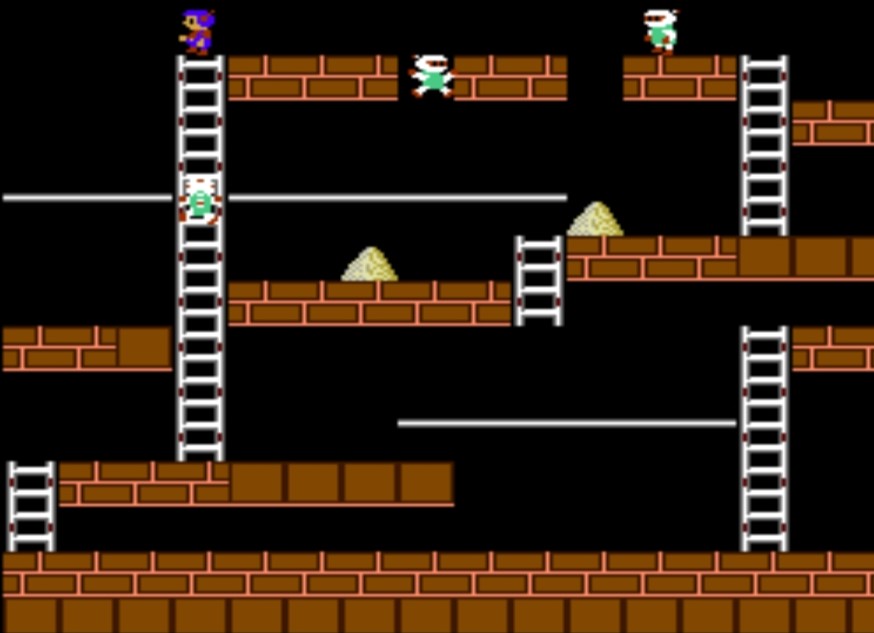 The game also has a level editor, which is a cool feature, to be sure (and yet another similarity to Wrecking Crew). The game's visuals are plain and not charming. Worse, there is no background music at all. A repetitive jingle plays at the beiginning of each stage, including after each life lost, while the screen pans across in order to show you the entire stage layout. The game looks and sounds dated even by the standards of 1987.

I don't mind arcade games and trying to score high points, but Lode Runner is too hard for me and not enough fun. After an hour of play, I began to improve some, but I can't say I had much fun in the process. There are too many better video games out there to spend any longer with Lode Runner.

"It appears simple but there's a genius level of complexity inherent in the design."
— Pat Contri, Ultimate Nintendo: Guide to the NES Library, 4/5 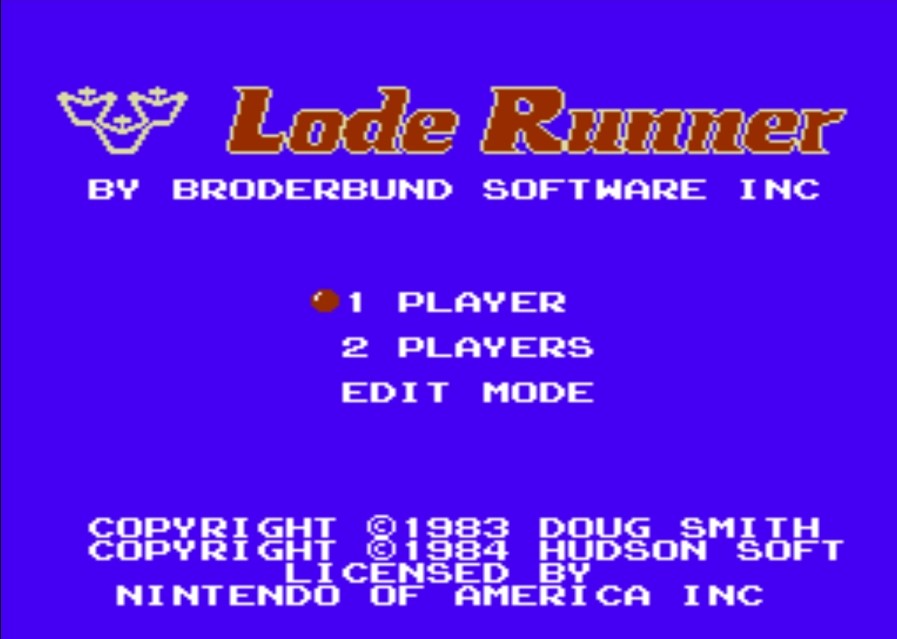