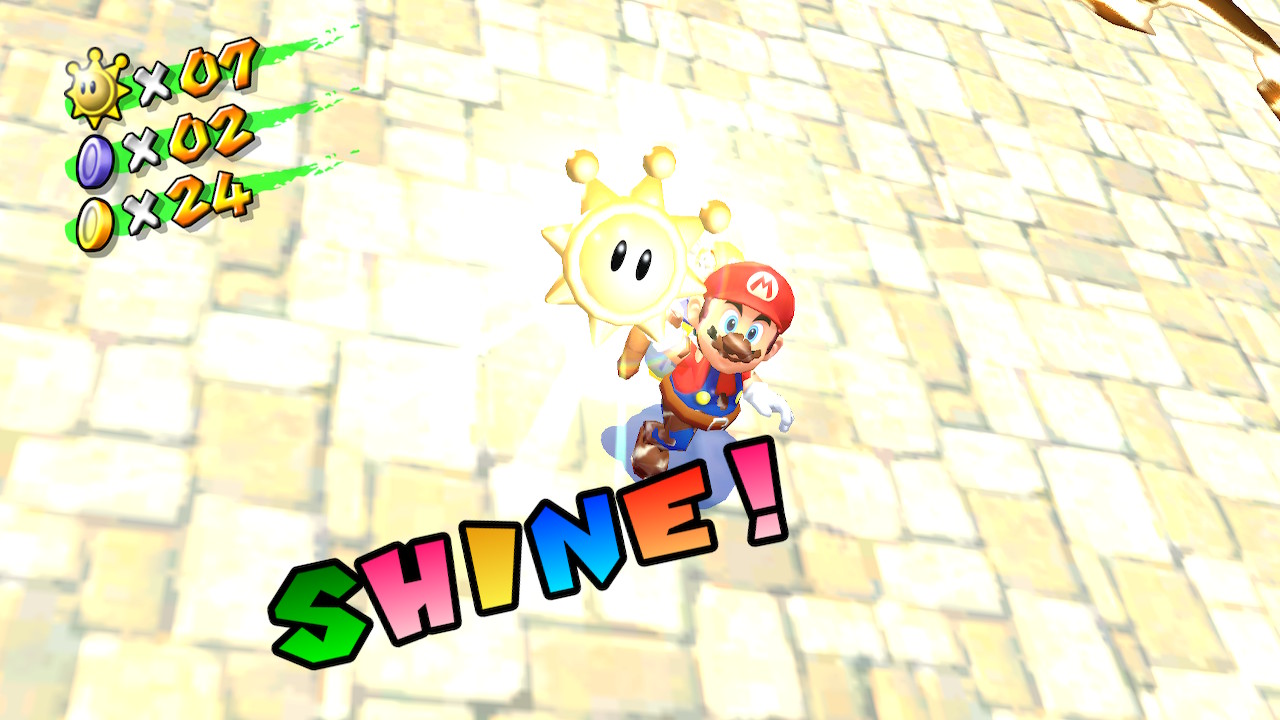 Today is the 20th anniversary of the U.S. release of Super Mario Sunshine, the Super Mario game of the Nintendo Game Cube.

Super Mario Sunshine follows the formula laid down in Super Mario 64. Mario's move set is largely unaltered, so if you've played that game, you'll be able to dive right in. Each level is a large play space in which Mario must find and collect Shine Sprites (the equivalent of Stars in Mario 64). Each stage contains eight "episodes." When Mario finds a Shine, he completes the episode. Each episode changes certain aspects of the level (same as in Mario 64). For example, in one level you are tasked with removing enemies from giant mirrors in order to dislodge an enormous Wriggler, then in the next episode you must defeat the rampaging Wriggler.

The game also re-uses Mario 64's organizational mechanic by which Mario accesses the different levels through portals painted on walls. The central hub of Mario 64 was Peach's Castle. Here it is Isle Delfino, a beautiful island resort inhabited by the gelatin-like Pianta, who have trees growing out of their heads.

Just as Peach's Castle housed several hidden Stars, so too does Delfino Plaza hold Shines, effectively making it the second level of the game (after the quick opening stage at the Delfino Airstrip). A new feature is that Mario can purchase Shines by spending ten blue coins. Some blue coins are in open air, like yellow coins, but most are uncovered by spraying graffiti. Some of these cause the coin to appear elsewhere on the map next to a matching graffito, and Mario has just a few seconds to race over and collect it. A few Pianta gives you blue coins after you clean goop off them. The usual yellow coins also appear, of course. Each yellow coin restores one bar of Mario's life meter, getting 50 in a stage gets him an extra life, and getting 100 gets a Shine Sprite.

Besides the island-resort theme, the biggest difference between this game and its predecessor is the FLUDD: Flash Liquidizer Ultra Dousing Device. Throughout the game (except in some difficult platforming areas) Mario wears a water-shooting device akin to a portable firehose. It runs out of water after a while, but Mario can refill it in any body of water or sprinkler.

Bowser Jr. is introduced in this game. He has contaminated Isle Delfino with an oil-like goop that Mario must clean up. Mario has been falsely accused of creating the mess himself, because Bowser Jr. disguised himself as Shadow Mario. The Pianta are apparently too stupid to tell the difference between Mario and the translucent, ghostly Shadow Mario.

FLUDD lets you wash away the goop as well as graffiti left by Bowser Jr.. You also can attack enemies with the FLUDD. Mario can pick up different nozzles for the FLUDD. Hover Nozzle lets him hover for a few seconds. This allows Mario to access areas that would be very difficult or impossible for him to reach. Rocket Nozzle shoots Mario extremely high into the air. Turbo Nozzle propels him forward at great velocity. 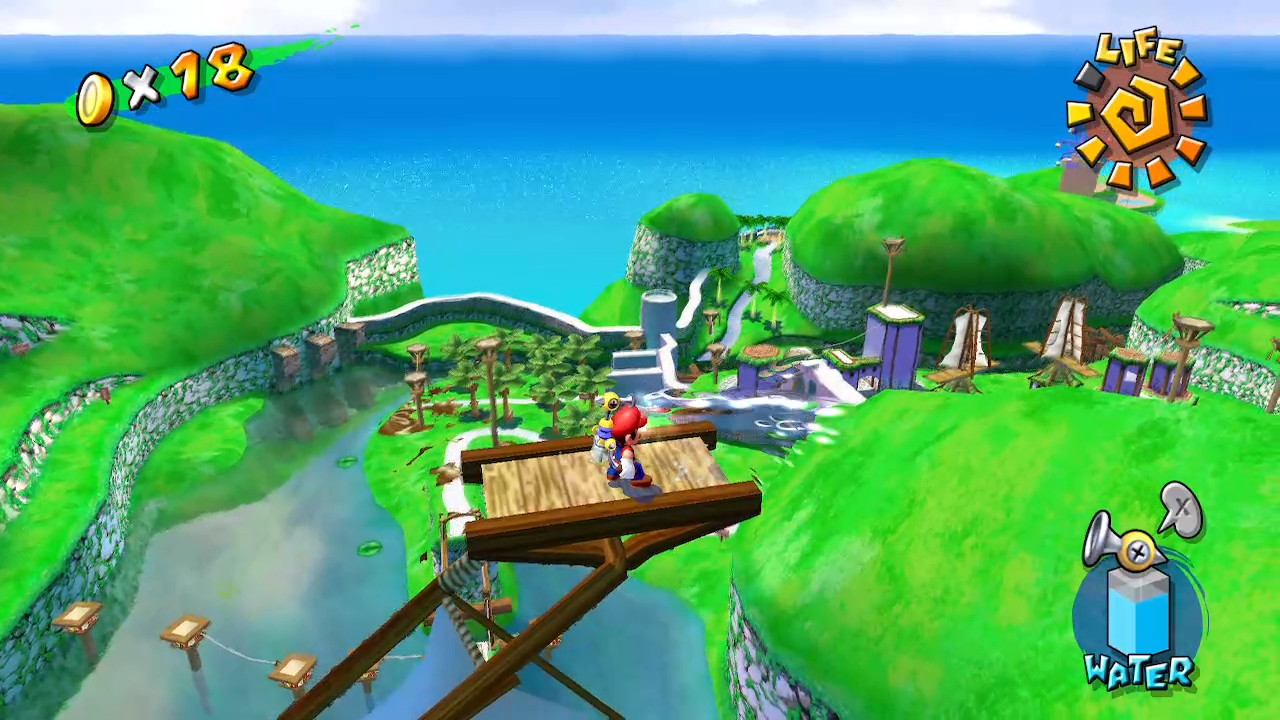 FLUDD is a huge departure from other Mario games. It's creative and can be fun, but it can also get tedious washing away goop. It makes for a style of gameplay that feels un-Mario-ish (for lack of a better term). On the other hand, with so many fantastic Mario games available to play at this point, it's not a bad thing to have something else on offer. No doubt there are people for whom this is their favorite Mario game.

Different-colored Yoshis make an appearance in this game. To hatch a Yoshi egg, Mario must feed it the specific fruit it's thinking about. The Yoshis spray juice out of their mouths like FLUDD. For some reason, this juice turns certain enemies, like Boos, into platforms. Depending on the color of the juice, which is determined by which fruit the dinosaur last ate, these platforms may move vertically, horizontally, or not at all. Personally, I found this ability weird. Yoshi's appearance here doesn't live up to how fun he is in Super Mario World.

A downside of the game is the small number of levels. Mario 64 has nineteen levels: Super Mario Sunshine has only ten. Both games contain 120 Stars or Shines to find, which means that instead of six main Stars per stage, there are now eight Shines. In this game you have to finish the first seven episodes of each level, because these involves chasing and spraying Shadow Mario, and catching him advances the plot.

Another downside is that the game is hard. It's probably the second hardest Mario game after Lost Levels. Many tricky jumps throughout the game can frustrate. This is especially true of the high platforming areas in which Shadow Mario steals FLUDD, thus preventing Mario from using the Hover Nozzle. These areas involve a lot of rotating and moving blocks, and there's no floor, which means every time you fall, you have to start the area over. I suspect a lot of people have never been able to finish this game because of these areas.

The game, as expected, looks and sounds great (especially the HD remake in Super Mario 3D All-Stars). Graphically, it's a huge step up from the blocky polygons of Super Mario 64. The camera controls much better than in Mario 64, too, though you still can't turn it upward except in first-person mode. In tight corners, the camera often hides Mario behind a wall, and you have to rotate it until you can see him again.

Even though Super Mario Sunshine is weaker than its predecessors, it's still a great game. Super Mario games are so good, even the lesser ones are well above average.

Linked Review
"Though it's not exactly the Mario game everyone was thinking of when it came out, it's still a classic Mario title that's definitely worth having in your collection."
— Brad Long, Nintendo Life, 9/10 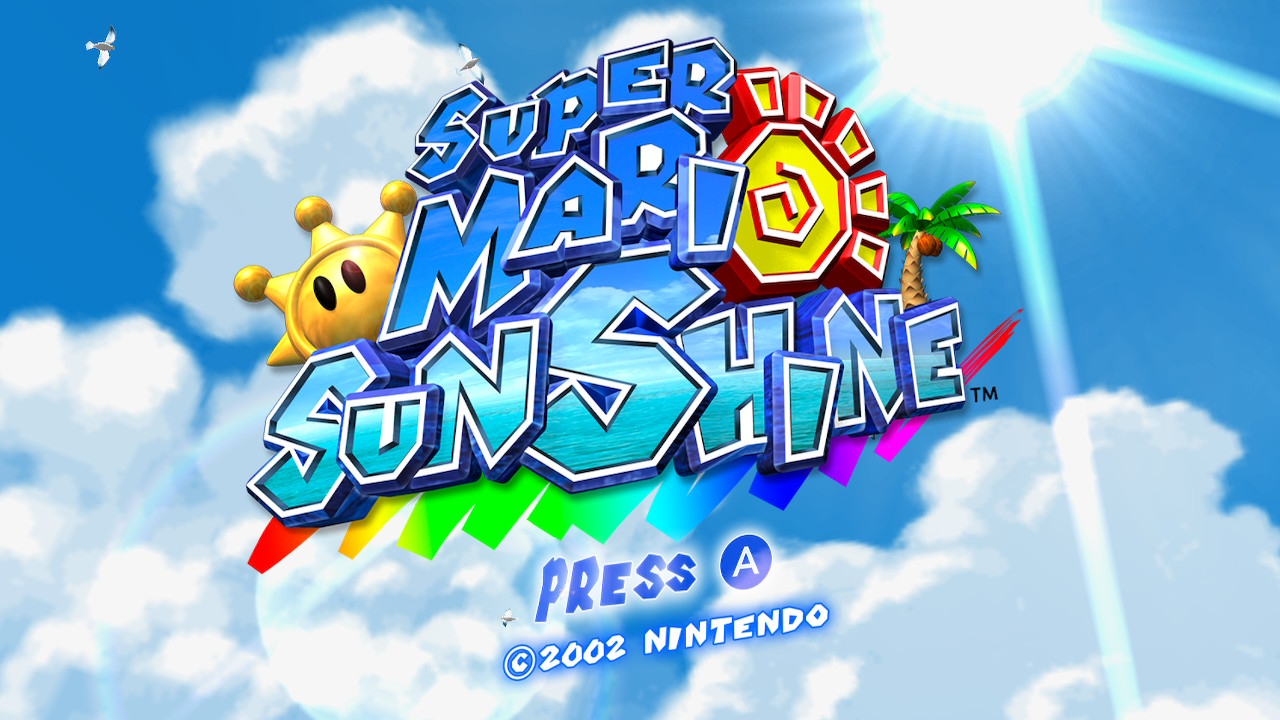